of Tuscany
(decoration of a well in Montepulciano)

The Grand Duchy of Tuscany

Outside the former Papal State it is unlikely to find coats of arms of the popes. The exception is due to popes who built churches or palaces in their country of origin. Many popes came from Tuscany and that explains why a few coats of arms can be found here. Tuscany was a State on its own, the Grand Duchy of Tuscany, and it was established by Cosimo de' Medici in 1569 with the approval of Pope Pius V. It lasted until 1859, the year the last Grand Duke Leopoldo II had to leave Florence. In 1860 Tuscany became part of the Kingdom of Italy. Two families (with an interval during Napoleon's times) reigned in Florence: the Medici until 1737 and after that year the Habsburg-Lorraine. 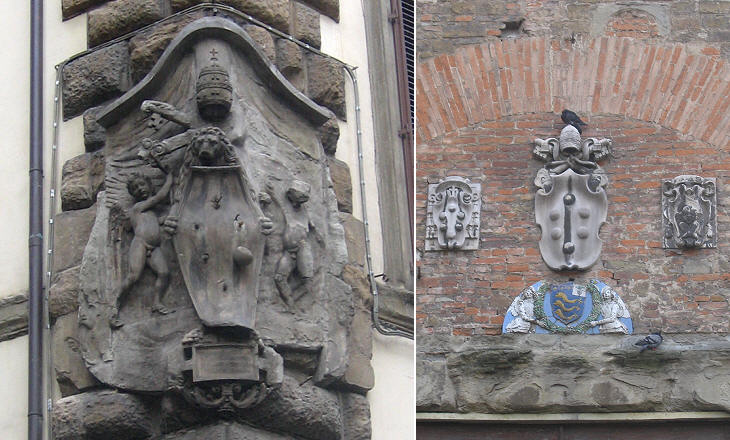 Coats of arms of Pope Leo X in Via de' Bardi (left) and at S. Paolino (right)

The Medici family played a significant role in the election of the Popes: three of them were Medici themselves and many others were elected because of the help of the Medici, e.g. Pius IV who used the Medici's coat of arms. The great Medici Pope is with no doubt Leo X and in Florence in Via de' Bardi quite unexpectedly you find his coat of arms (previously in the church of S. Stefano Maggiore). His coat of arms with that of Cardinal Giulio de' Medici his cousin who became Pope Clement VII can be seen on the façade of S. Paolino. Another coat of arms of Pope Leo X decorates the façade of SS. Annunziata. 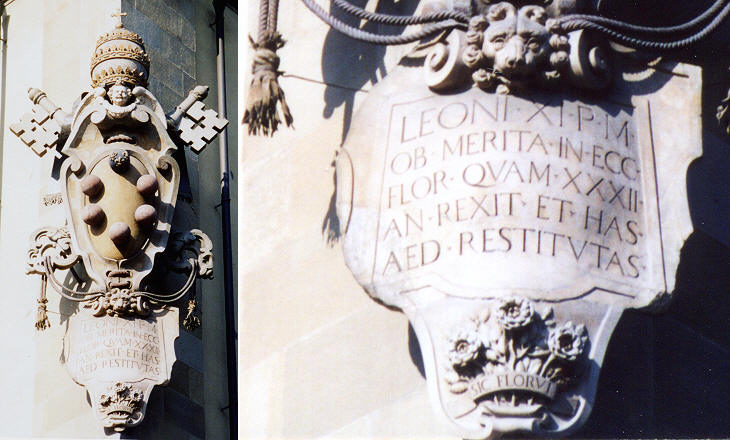 Coat of arms of Pope Leo XI at Palazzo Arcivescovile

Pope Leo XI, Alessandro de' Medici was before his election Archbishop of Florence for 32 years and he rebuilt the Archbishop's Palace in Piazza del Duomo. A gigantic coat of arms celebrates this fact. The three roses with the motto "Sic Florui" (I blossomed in this way) are a reference to the fact the Leo XI was pope for only a few days. Elected on April 1, 1605, he died on April 27. A similar symbol is on his tomb in S. Pietro. 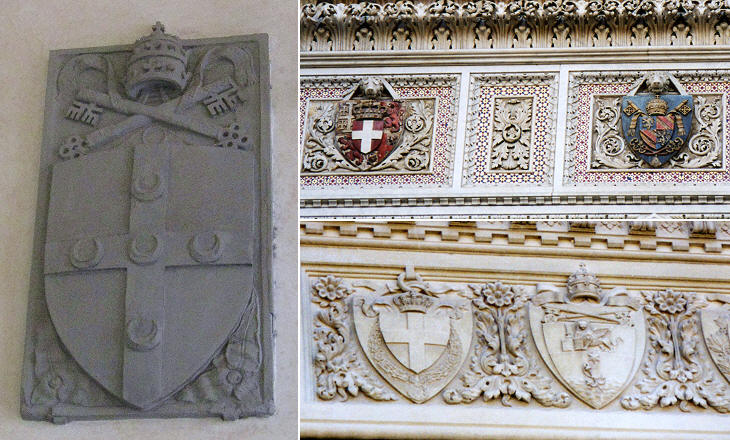 The Archbishop's Palace courtyard houses several coats of arms of the cardinals who lived there. It is puzzling to see here a coat of arms of Pope Pius II, who was bishop in Siena.
Many Tuscan churches had no façade. Both the Cathedrals of Florence and Arezzo were given their current aspect in the second half of the XIXth century or at the beginning of the XXth century. 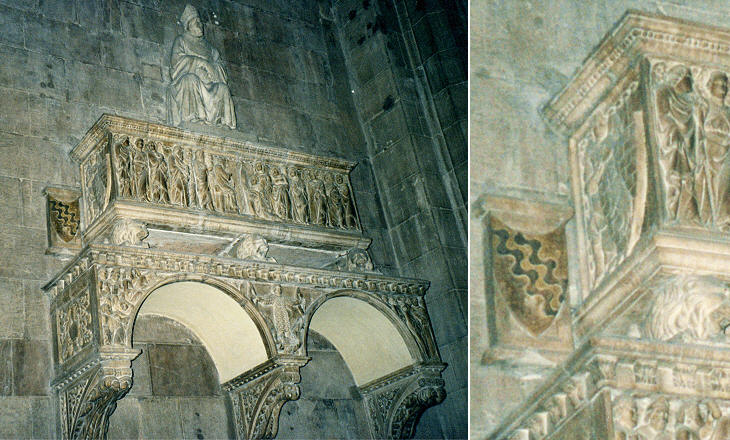 Monument to a Pope in S. Maria del Fiore

In S. Maria del Fiore, the Cathedral of Florence there is a monument to a Pope. In general it is thought to be in honour of John XXIII, an antipope who lived at the beginning of the XVth century. However the coat of arms shows the symbol of Pope Boniface VIII and there is no clear answer. It is also amazing that both Popes are among the least popular ones. 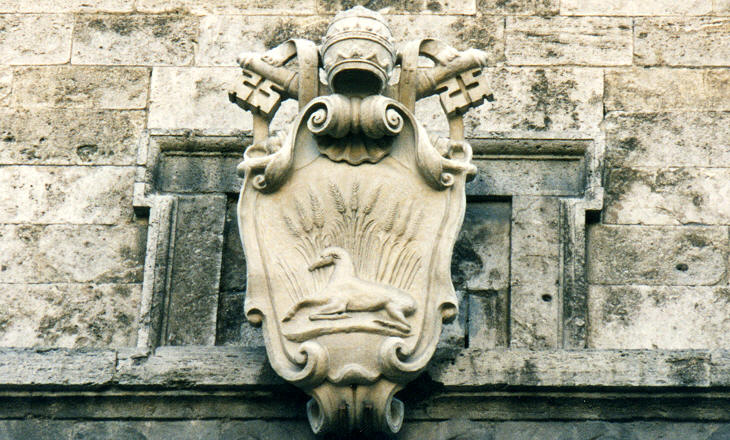 Coat of arms of Pope Marcellus II at Palazzo Cervini

Montepulciano is a town between Siena and Arezzo in the Chianti area. Here Marcello Cervini was born and his very short pontificate in 1555, while it has left no trace in Rome, is honoured in the façade of his family Palace.
Cervini comes from cervo (deer) and that's why the coat of arms shows a doe. 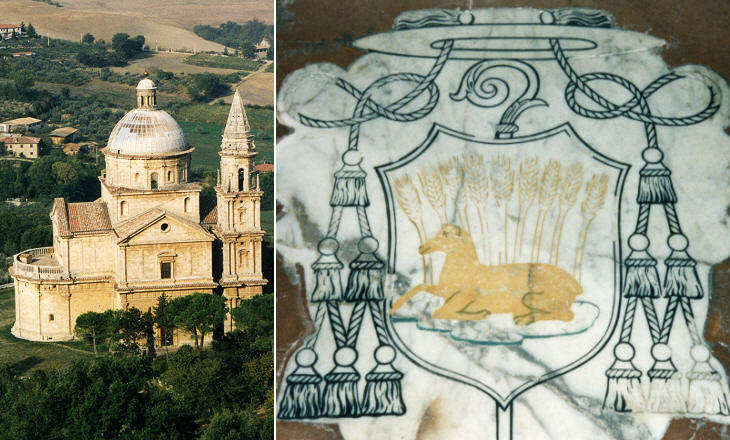 (left) Madonna di S. Biagio; (right) coat of arms of Cardinal Marcello Cervini (also in the image used as background for this page)

The Cervini family was very influential in Montepulciano and a fine coat of arms of a Cardinal Cervini can be found in Madonna di S. Biagio. Let's spend a couple of words on this Renaissance church, which has a Greek cross shape. At one point it was considered as a model for the completion of S. Pietro itself and you may try to figure out how the basilica would have been if this project had been implemented. 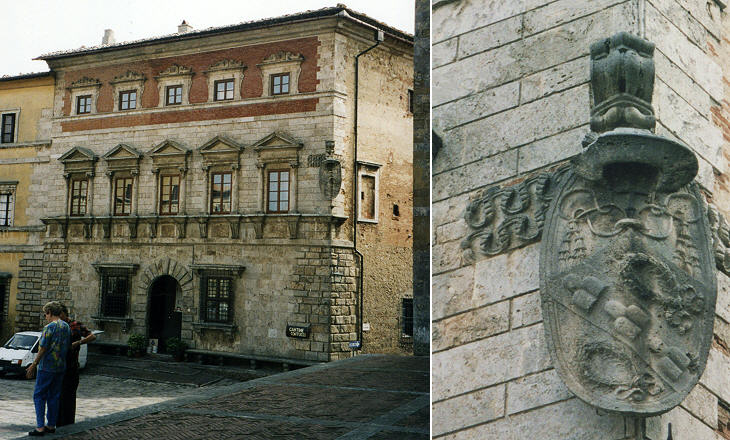 The predecessor of Marcellus II, Pope Julius III Giovan Maria Ciocchi del Monte, had a palace in the main square of Montepulciano and his coat of arm as a cardinal is typical of that full Renaissance period.
The top floor was added to the palace during the baroque period: you may wish to see a page with other coats of arms of Pope Julius III. 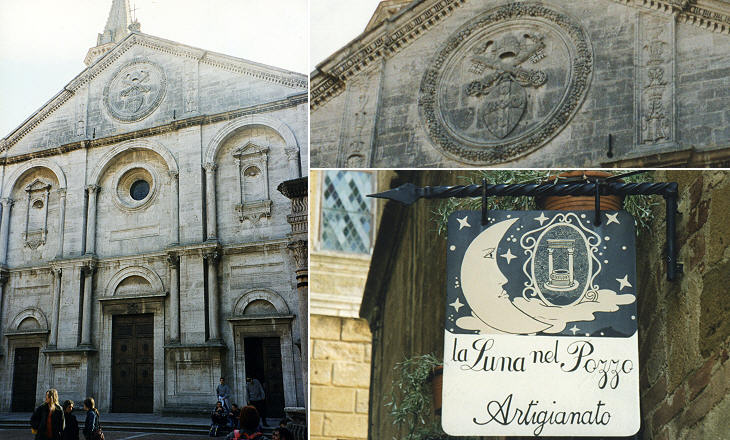 (left) Cathedral; (right-above) coat of arms of Pope Pius II; (right-below) a local shop named after the moon of the Pope's coat of arms

Pienza is the self-celebration of Pope Pius II, Enea Silvio Piccolomini, pope in the period 1458-1464 (learn more about him). A man of great culture, friend of artists, he changed the little hamlet of Corsignano, near Montepulciano, where he was born, into the ideal city of early Renaissance and gave it his name.
The five moons of his coat of arms are everywhere in this little town. 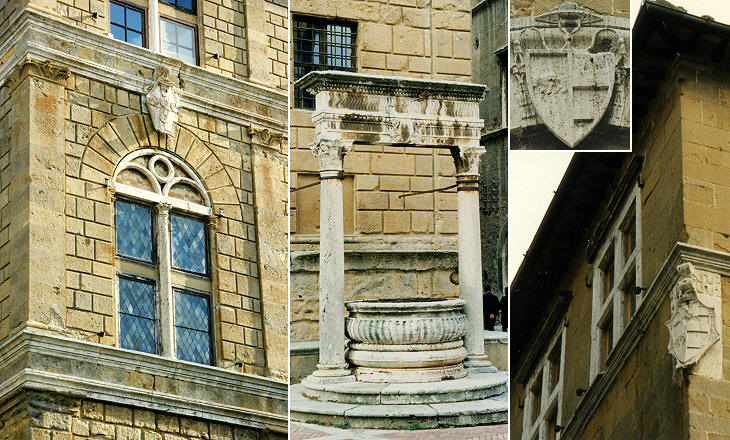 On the main square two palaces flank the church. The Piccolomini Palace is built in typical Florentine style, while the palace built by Cardinal Rodrigo Borgia (who eventually became Pope Alexander VI) has a more sober design and windows similar to those of Palazzo Venezia in Rome. 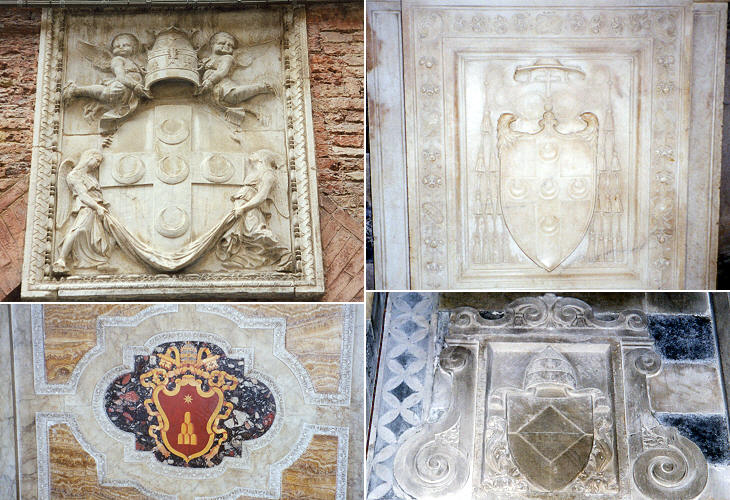 Siena was until April 17, 1555 an independent republic, when it fell after a 15 months' siege laid by the Florentine supporters of Charles V. The loss of independence froze its development and that explains why it is among the best preserved medieval towns of Italy. In the Cathedral there are the statues of six popes from Siena (or having some connection with Siena), namely Alexander III, Pius II, Pius III, Marcellus II, Paul V and Alexander VII. The two who really mattered for Siena were Pius II and Alexander VII. Their families (Piccolomini and Chigi) were among the most prominent ones until a few years ago.