Pope Pius II, Enea Silvio Piccolomini
(relief showing the coats of arms of Pope Pius II and of his nephew in the cathedral of Siena)

Travellers by car or bus from Florence may hardly notice a column standing on the avenue leading to Porta Camollia, the northern gate of Siena. The column supports a relief showing an imperial eagle next to the coat of arms of Portugal: on the back of the relief a long inscription explains the link between the two symbols and the city of Siena. 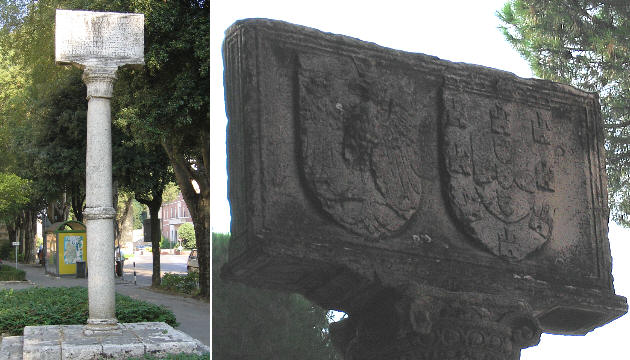 Column celebrating the meeting between Frederick III, the first Holy Roman Emperor of the House of Habsburg, and Princess Eleanor of Portugal

On February 24, 1452 Emperor Frederick III met his future bride, Eleanor of Portugal at that very point. The marriage had been arranged by the Bishop of Siena, Enea Silvio Piccolomini: the Emperor had the highest noble rank, but little money: his bride came from an insofar almost obscure kingdom, always threatened by the kings of Castile, but greatly enriched by its expanding colonial possessions. Notwithstanding the very practical purpose behind their marriage, Frederick and Eleanor were a very happy couple.
Why the Bishop of Siena had a role in such a high level diplomatic venture is explained by the career of the man who held that position, Enea Silvio Piccolomini.

He was born in 1405 in Corsignano a hamlet, not far from Siena: his family, although of noble origin, was rather impoverished at that time. The five moons of the Piccolomini's coat of arms could hardly compete with the three moons of the Tolomei, maybe the richest bankers of Siena.

Young Enea was able to study law in Siena, only with the help of his uncle. A very brilliant student, he was hired as secretary by Cardinal Domenico Capranica: he subsequently worked for other bishops and cardinals and took part in a never ending council in Basel: he extensively travelled throughout Europe. In 1439 he became first secretary of the antipope Felix V and in 1442 he joined the imperial court of Frederick III. In the meantime he became renowned for his literary works, which included poems and novels, as well as essays supporting the rights of his patrons. Notwithstanding its past support of the antipope in 1446 he became secretary of Pope Eugenius IV, for whom he wrote De ortu et Romani auctoritate imperii an essay stating, based on new evidence. the origin of the papal prerogatives (a medieval account had for centuries attributed them to a donation made by Emperor Constantine, but an analysis by Lorenzo Valla had proved the original document to be a forgery).
In 1447, at the suggestion of the Pope, he embraced a new career and became a priest and shortly afterwards was appointed bishop of Trieste, while continuing to act as a diplomat. In 1450 he became bishop of Siena and in 1452 he accompanied Emperor Frederick III and Eleanor of Portugal to Rome where they were married by Pope Nicholas V. In 1456 he was appointed cardinal by Pope Calixtus III and he was assigned the church of S. Saba, which he largely restored.
In 1458, at the death of Calixtus III he became pope and chose the name of Pius: a literary, rather than a religious choice, because Virgil used to give the appellation of pious to Aeneas, the hero of his poem.

Palazzo Piccolomini (far left) seen from Piazza del Campo and from Banchi di Sotto; detail of the lamp at the entrance

One of the first decisions taken by the newly elected pope was that of appointing cardinals two of his nephews, thus setting the groundwork for the appearance of the Piccolomini's five moons all over Siena.
Palazzo Piccolomini built by his nephews after the death of the Pope, is located at one corner of Piazza del Campo, the main square of Siena, but its Florentine Renaissance façade does not interfere with the medieval aspect of the square. 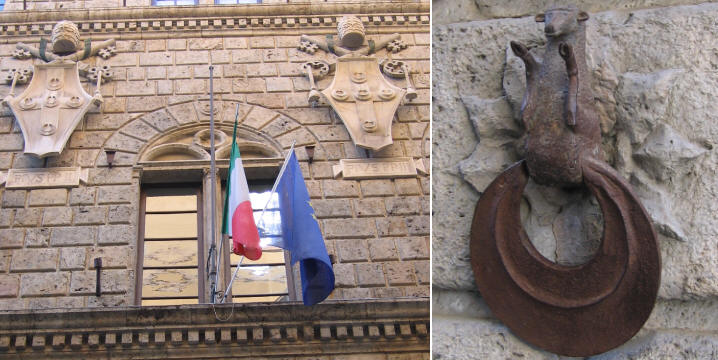 The moons of the Piccolomini do not appear only in gigantic coats of arms, but also in the decoration of the palace and in minor objects.
Pius II did not lack self-esteem: Emperor Augustus had left a list of his main accomplishments and the Pope did the same by writing an account of his achievements. He also renamed after himself (Pienza) the small village where he was born and he built there a cathedral and a family palace. Pius II himself funded the construction in 1462 of this elegant loggia, maybe having in mind that of Piazza della Signoria in Florence: the coats of arms of the Pope do not show the keys of St. Peter, which will consistently become part of the papal heraldic symbol only at a later period.

From a religious viewpoint Pope Pius II took care of restoring several churches in Siena, either when he was a cardinal or after his papal election, but the main gift he made to Siena was the canonization of St. Catherine.
His main worry was the growing Muslim threat: he even thought to convert Sultan Mehmet II and he wrote a letter to him in which, in return for his conversion, he offered him the title of Roman emperor (but it is generally thought the letter was never sent). He then called on the Christian kings to join efforts to retake Constantinople from the Ottomans and was prepared to personally lead this sort of crusade. To show he meant what he was preaching in 1464 he went to Ancona, the assembly point of the expedition, to vainly wait for the arrivals of the troops and of the Venetian fleet which should have carried them to Greece.
He passed away in mid August when he realized his dream would never come true.

Pius II's nephew, Cardinal Francesco Todeschini Piccolomini was elected pope on September 22, 1503 but his five moons shone for just 26 days!, as a cardinal however he decorated the library of the Cathedral of Siena with frescoes depicting events of the life of his uncle.