Links to this page can be found in Book 7, Map C2, Day 4, View C6, Rione Colonna and Rione Sant'Eustachio. 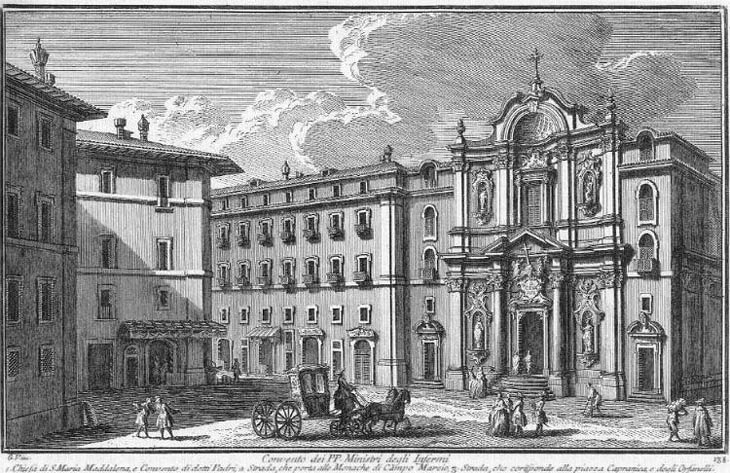 This 1756 etching by Giuseppe Vasi was meant to show the convent of Ministri degli Infermi (Servants of the Sick aka Camillians), an order founded in 1582 by St. Camillus de Lellis to provide spiritual comfort to the very sick; however the focus of the view is on the richly decorated façade of the church attached to the convent; at the time of the etching the façade was a very recent addition to the monuments of modern Rome as it had been completed in 1735.
The view is taken from the green dot in the 1748 small map below. In the description below the plate Vasi made reference to: 1) S. Maria Maddalena and attached convent; 2) Street leading to S. Maria in Campo Marzio (Via della Maddalena); 3) Street leading to Collegio Capranica. The map shows also 4) Palazzo e Collegio Capranica; 5) S. Maria in Aquiro; 6) Via della Spada d'Orlando; 7) S. Salvatore alle Coppelle. The dotted line in the small map delineates the border between Rione Sant'Eustachio (left) and Rione Colonna (right). 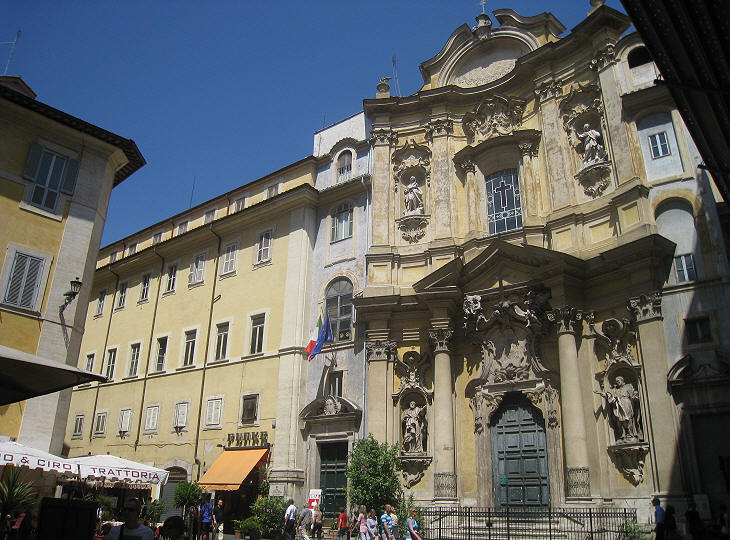 An inscription above the entrance to the convent says that the Camillians were authorized by Pope Urban VIII to pull down some houses to obtain a small square in front of the church they wanted to build; thanks to that decision today it is possible to take a picture which is almost identical to Vasi's view.
While the buildings are the same the character of the neighbourhood has changed in very recent years: Via della Maddalena can compete with Trastevere for the number of restaurants it houses; in 2009 Michelle Obama, the American First Lady, chose a restaurant opposite S. Salvatore alle Coppelle for tasting an "Italian trittico", three different kinds of pasta, with her daughters. 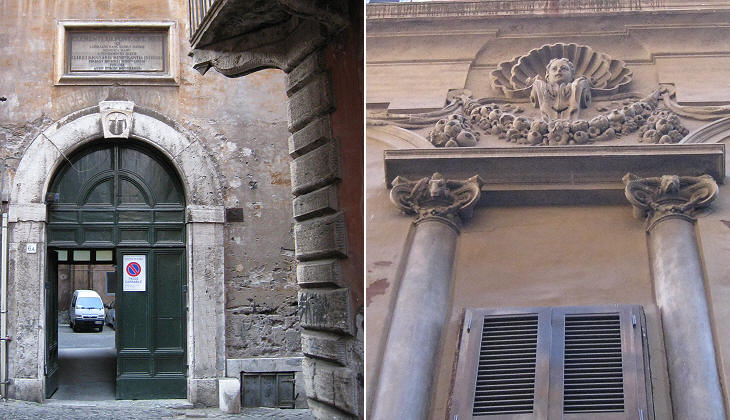 (left) Side entrance to the convent; (right) decoration of a building opposite the convent

In 1586 St. Camillus de Lellis was assigned a small hospital which included a church dedicated to St. Mary Magdalene; the complex belonged to Arciconfraternita del Gonfalone; the saint helped the sick also at Spedale di S. Spirito. The construction of a new convent started in 1628, but financial difficulties delayed its completion; the side adjoining the church was designed by Carlo Bizzaccheri; the complex included shops and flats which were rented to provide a stable income to the order. 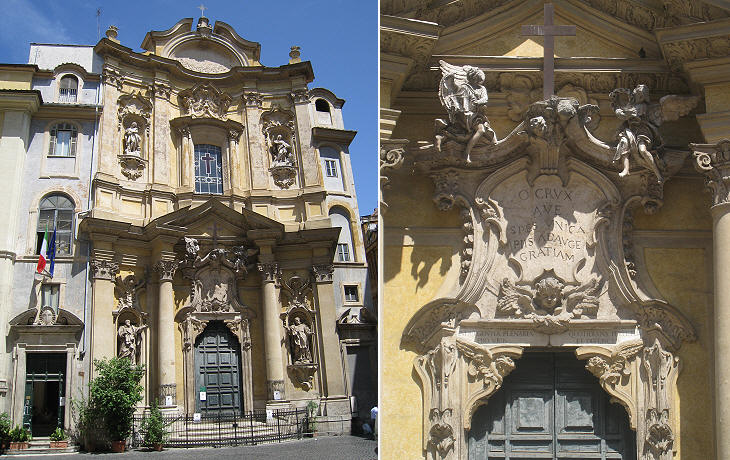 The Camillians entirely rebuilt the church by relocating it to the southern end of the complex; they maintained however its dedication to St. Mary Magdalene, although in Rome the saint was associated with nunneries and institutions aimed at the redemption of prostitutes (one of which was only yards away); however they chose not to draw much attention to her statue by placing it in the upper section of the façade (in the image used as background for this page you can see that it has a very nice naked leg). The statue is a work by Joseph Canart, a French or Flemish sculptor who spent most of his life in Naples where he worked at the restoration of ancient statues which were found at Herculaneum. 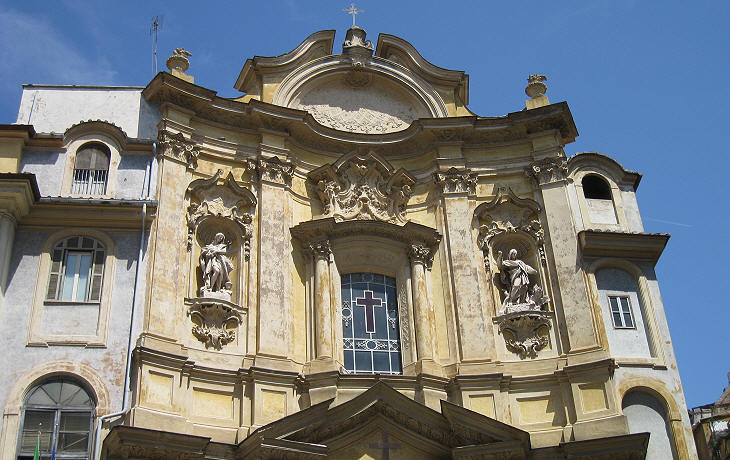 Upper section of the façade

The design of the façade is traditionally regarded as being a work by Giuseppe Sardi, but some art historians attribute it to Emanuel Rodriguez Dos Santos, a Portuguese architect who designed SS. Trinità degli Spagnoli. Its rich decoration was highly criticized during the XIXth century; in 1844 Rev. Jeremiah Donovan wrote in his very detailed guide to Rome: The front is disfigured by broken lines, tasteless and superfluous ornaments and capricious pediments. 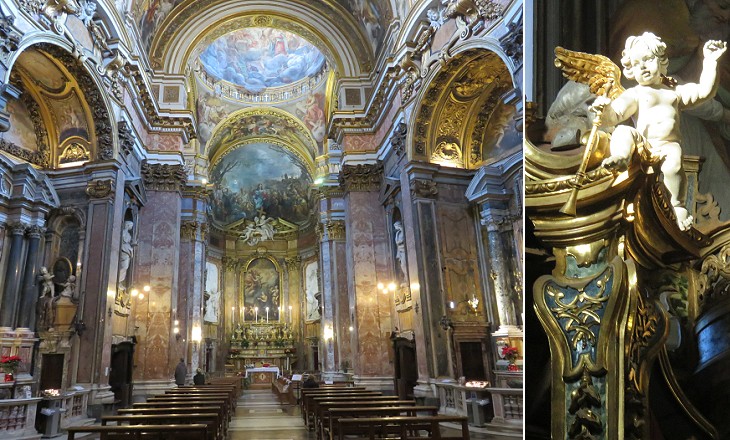 (left) Interior; (right) detail of the organ; you may wish to see the whole organ in a page covering this topic

The interior has the same exuberant decoration as the façade, although Donovan was less critical about it: It is richly decorated with marbles and gilt stuccoes. The excess of decoration was partly due to the desire to celebrate the 1742 beatification of Camillus de Lellis with particular pomp (he was canonized in 1746). Similar to other churches of Rome having a complex decoration based on coloured stuccoes, S. Maria Maddalena requires continuous maintenance. In the 1990s the interior had a rather dingy aspect. 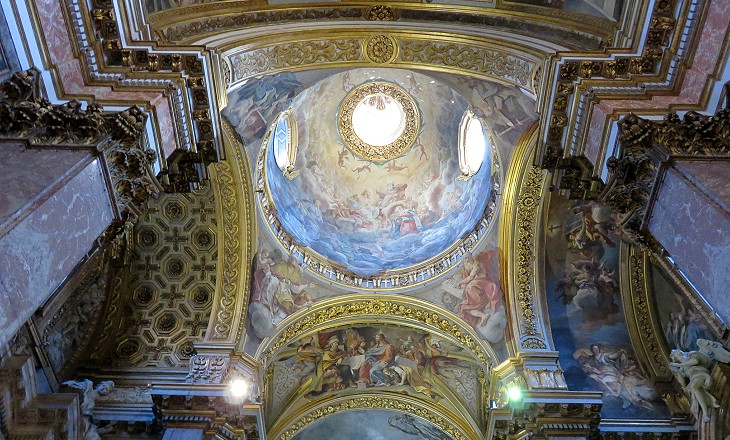 Decoration of the transept and of the dome by Étienne Parrocel (1737), a painter from Avignon who spent most of his life in Rome. He painted also the façade of S. Gregorio a Ponte Quattro Capi 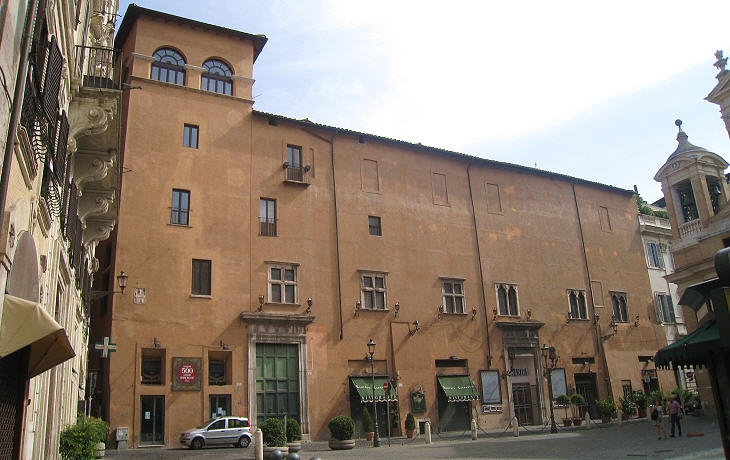 The Pantagati were a family from Capranica Prenestina, a small town near Palestrina, which at the time belonged to the Colonna; in 1423 Pope Martin V Colonna appointed Domenico Pantagati cardinal who chose to be called after his hometown; after Domenico's death in 1458 Pope Pius II appointed his brother Angelo cardinal in 1460. Domenico started the construction of the family palace which he bequeathed to his brother under the condition that it should also house a college for the education of the young who chose an ecclesiastical career. Angelo preferred to enlarge the building in order to provide his residence and the college with separate entrances and facilities. 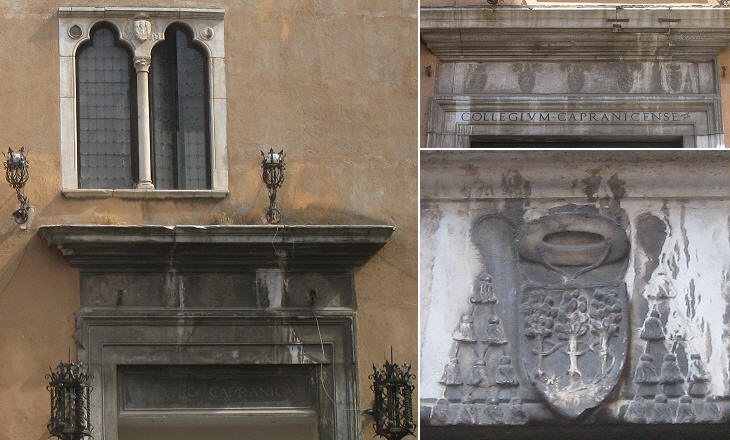 (left) Portal and window of Palazzo Capranica; (right-above) portal of Collegio Capranica with a series of erased coats of arms (the central one belonged to Pope Nicholas V); (right-below) coat of arms of Cardinal Angelo Capranica on a side entrance to Collegio Capranica

Palazzo Capranica has three Gothic windows which are rather unusual to see in Rome; the addition which included the college was similar to Palazzo Venezia in the design of the windows and in having a lateral tower; the overall proportions of the two buildings were disgracefully modified by the addition of a storey without windows in the XVIIIth century.
In 1679 a theatre was opened on the first floor of Palazzo Capranica (its shape can be seen in the small map). It was repeatedly modified and eventually it was turned into a cinema which operated until 2000.

In 1527 the students of Collegio Capranica died fighting at Porta S. Spirito during the Sack of Rome to allow Pope Clement VII to escape to Castel Sant'Angelo. 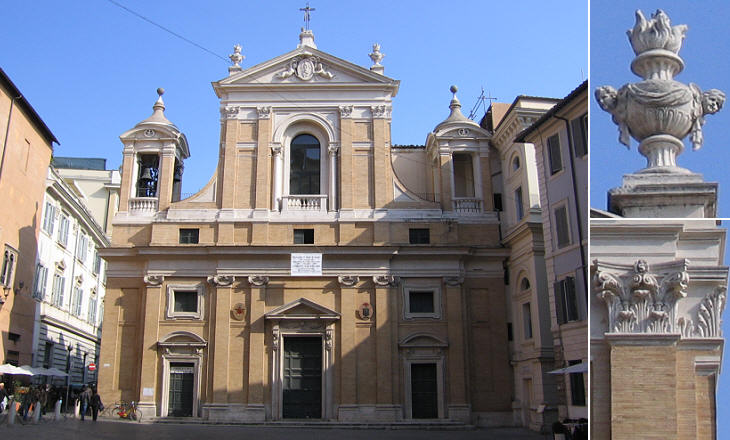 (left) Façade; (right) details of the decoration; the clothes hanging from the flaming vase are swaddling clothes, a reference to the orphans who were brought up in the adjoining building

A church was built on this site in the Vth century at the expense of a Cyrus, after whom the church was called "a Cyro" (built by Cyrus), thus leading to its current name, Aquiro. It was also known as Chiesa degli Orfanelli because from 1540 to the XIXth century the building to the right of the church housed Collegio Salviati, an institution for the care and education of orphans. The medieval church was rebuilt between 1590 and 1774 when the façade was completed by Pietro Camporese. The interior of the church was entirely redesigned in 1866, but it retains some baroque tombs, e.g. the fine Monument to Archbishop Carlo di Montecatini by Domenico Guidi and a few interesting paintings. (left) Cappella dell'Annunziata, which was not affected by the XIXth century redecoration, with paintings by Carlo Saraceni (1617); (right) The Crowning with Thorns, a XVIIth century painting which for a time was attributed to Gherardo delle Notti (Gerard von Honthorst), a Flemish painter who was influenced by Caravaggio (see his paintings at Chiesa dei Cappuccini and at Convento dei Cappuccini in Albano) 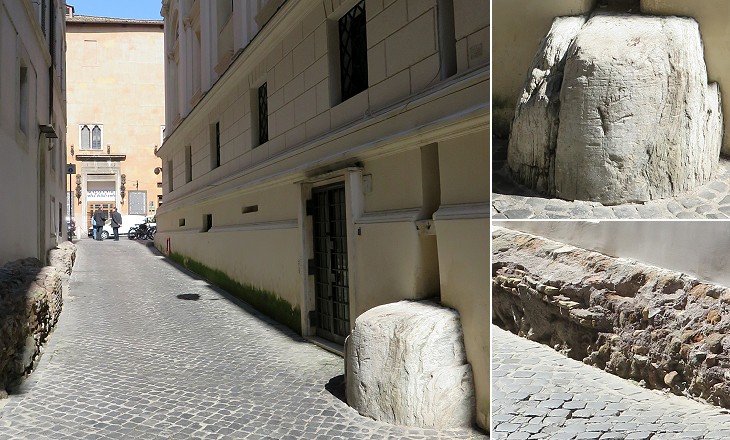 In a narrow street near S. Maria in Aquiro a broken cipollino column projects from Collegio Salviati; according to tradition it was cut by Roland, the chief paladin of Emperor Charlemagne, in the vain attempt to destroy Durendal (the name of his sword). The event is remembered in the name of the street. The broken column and the piece of wall unearthed in the opposite building belonged to a temple dedicated by Emperor Hadrian to Matidia, his mother-in-law, and niece of Emperor Trajan. Hadrian most likely decided to erect a temple to his mother-in-law to stress his links with Trajan, as there were doubts about him having actually being adopted as successor by the latter. In the same neighbourhood Hadrian rebuilt the Pantheon and eventually Emperor Antoninus Pius dedicated a temple to him. 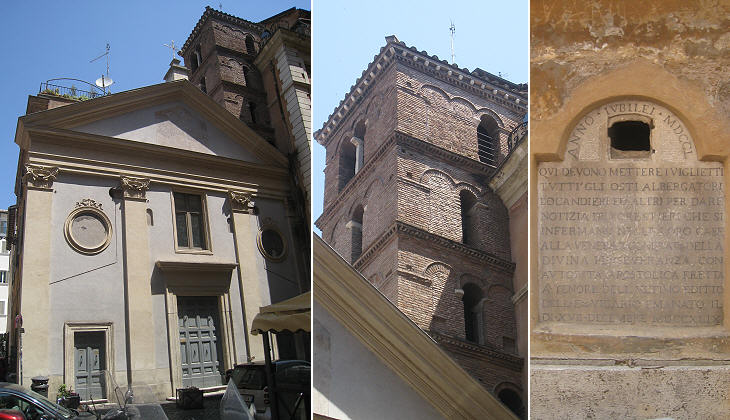 The church is named after the Cupellari, manufacturers of small barrels used for storing water, who had their workshops in the area. With the new aqueducts built by Pope Sixtus V and Pope Paul V this trade was abandoned, but the name is still associated with a church, a street and a square. The church was almost entirely redesigned by Carlo De Dominicis in the XVIIIth century and it was entrusted with a brotherhood in charge of assisting sick travellers. A sort of mail box on the side wall of the church retains the 1750 inscription inviting (or rather requiring) the innkeepers to provide the names of their guests needing assistance. Since 1913 S. Salvatore alle Coppelle is the church of the Romanian community in Rome. 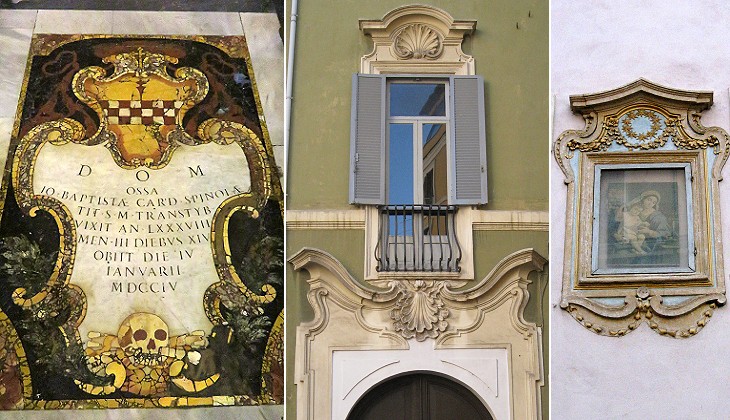 (left) Gravestone of Cardinal Giovanni Battista Spinola "seniore" (d. 1704), it resembles another Spinola gravestone at S. Andrea al Quirinale (you may wish to see the fine Monument to Cardinal Giorgio Spinola by Bernardino Ludovisi in a page covering monuments showing the dead in a medallion); (centre) detail of an XVIIIth century building near the church which is part of Palazzo Nari; (right) madonnella based on a painting by Pierre Mignard (1612-1695) who spent more than 20 years in Rome before returning to Paris and becoming a famous portraitist (another copy is at SS. Cosma e Damiano dei Barbieri)