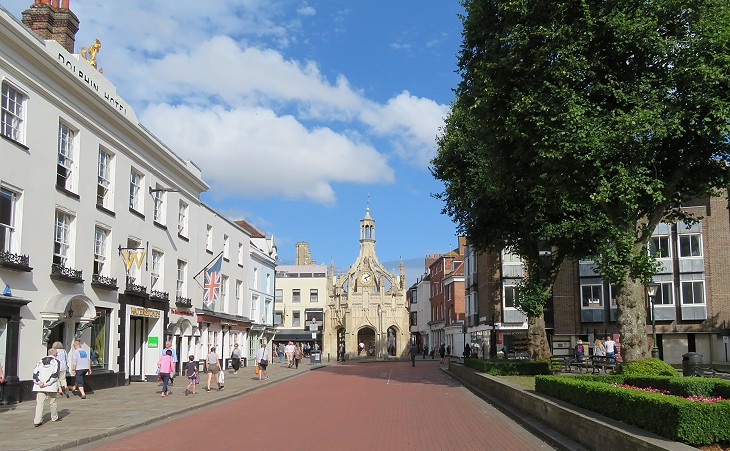 West Street and Market Cross, a XVth century octagonal building which stands on the crossroads between the main "decumanus" (east-west street) and "cardo" (north-south street) of the Roman town

The province of the Regini (..) the capital of which was Reginorum now Chichester, ten miles distant from this place (the Roman Villa of Bignor) was in all probability one of those reduced by the Romans in the reign of the Emperor Claudius as we find recorded by Suetonius; and it is certain that Cogidubnus, a British prince who had submitted to the Roman power, and was made legate in Britain by Claudius, governed in this province.
Samuel Lysons - An Account of the Remains of a Roman Villa Discovered at Bignor - 1815
Aulus Plautius, the first consular governor, and his successor, Ostorius Scapula, were both eminent for military abilities. Under them, the nearest part of Britain was gradually reduced into the form of a province, and a colony of veterans was settled. Certain districts were bestowed upon king Cogidubnus, a prince who continued in perfect fidelity within our own memory. This was done agreeably to the ancient and long established practice of the Romans, to make even kings the instruments of servitude.
Cornelius Tacitus - Agricola - Oxford Translation 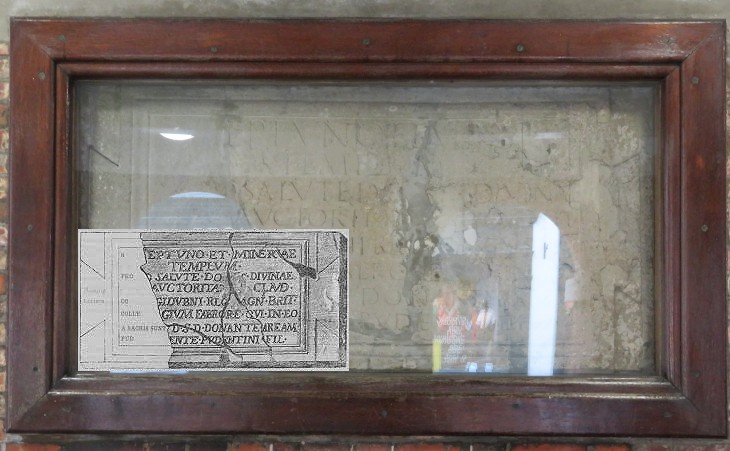 Roman inscription in the porch of the Council House

This Inscription (..) was found the Beginning of last April at Chichester in digging a Cellar under the Corner house of St Martins lane on the North Side as it comes into North street. It lay about four Foot under Ground with the Face upwards by which it had the Misfortune to receive a great deal of Damage from the Picks of the Labourers as they endeavoured to raise it.
Philosophical Transactions of the Royal Society of London - Sep.-Oct. 1723
We learn that Cogidubnus governed this province from the inscribed stone found in the year 1723 at Chichester (..) where it appears that by his order a temple dedicated to Neptune and Minerva was erected at Reginorum by the Collegium Fabrorum (a guild of carpenters). Lysons
The Regini were probably part of a larger tribe, the Atrebates, who supported Claudius' invasion of Britain. The Atrebates lived also in parts of Northern Gaul which were under Roman control.
The area around Chichester served as base to Vespasian in 43 AD when he was commander of Legio II Augusta to expand Roman control over south-western England and in particular over Vectis (Isle of Wight). The importance of Reginorum is confirmed by the construction of Fishbourne Palace, a mansion in the outskirts of the town, maybe the palace of King Cogidubnus or of a Roman governor. Roman wall in Deanery Farm Lane near the Cathedral

The south-western section of the historical centre of Chichester retains a stretch of walls which, although modified in the Middle Ages and in the XIXth century, stands on the site of the ancient Roman ones. The latter are dated ca 280, similar to those of Verulamium (St. Albans). The importance of Noviomagus (New Market) Reginorum was due to its proximity to a natural harbour which still exists two miles south-west of the walls, but which in Roman time was closer. The term Noviomagus followed by the name of a tribe applies to other locations in Germany and Gaul, e.g. Noviomagus Treverorum near Trier. 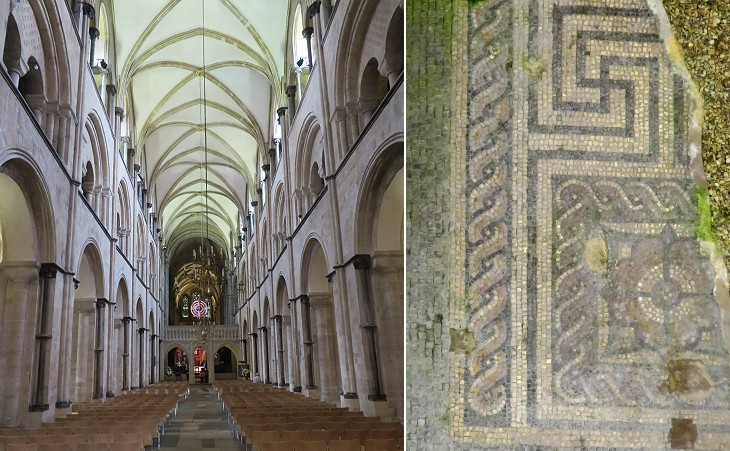 (left) Interior of the Cathedral; (right) fragment of a Roman mosaic under its floor

Samuel Lysons, the antiquarian who wrote the first description of the mosaics of the Roman Villa of Bignor praised George Tupper, its owner, who has taken so much care for their preservation, whilst most of the remains of a similar description found in this country have been demolished almost as soon as they were discovered.
It is likely that Roman floor mosaics still lie in the foundations of many houses of Chichester. The fragment found in the Cathedral is believed to belong to a basilica of the Forum. 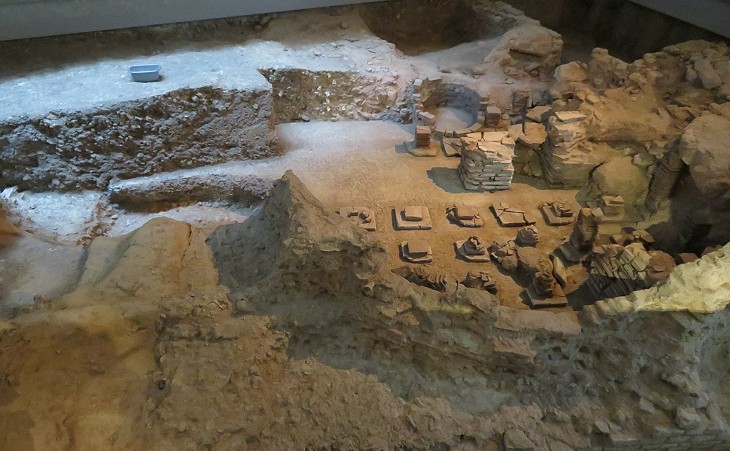 Roman baths inside "The Novium", the Archaeological Museum of Chichester, showing evidence of their "hypocaust", heating system

The excavations carried out in 1974-1975 revealed an area of the public baths, which included a range of hot rooms, an apsidal room, cold plunge bath, a large cistern and sewer. Archaeological fieldwork confirmed that the construction of the baths began in the Flavian period and continued into the early IInd century AD. (..) Between the IInd - Vth centuries the baths were subject to further alterations as fashions for types of bathing changed, before eventually falling into decline. From the Museum website.
The town had also an amphitheatre outside its eastern walls. 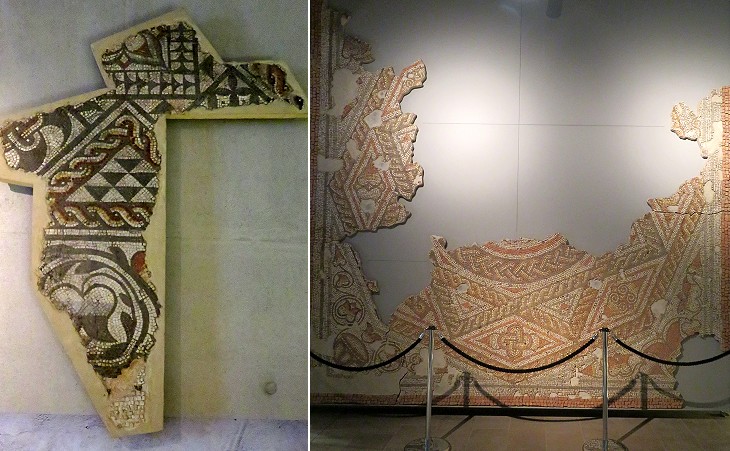 The opening of "The Novium" in 2012 allowed the display of several exhibits which previously were housed in the Chichester District Museum or in temporary shelters.
Two Roman villas were found in 1963 at Chilgrove, a village north of Chichester. One of them was decorated with a fine mosaic based on a circle inscribed in a double square which in turn is surrounded by an octagon; see a similar, more complete mosaic at Cirencester. 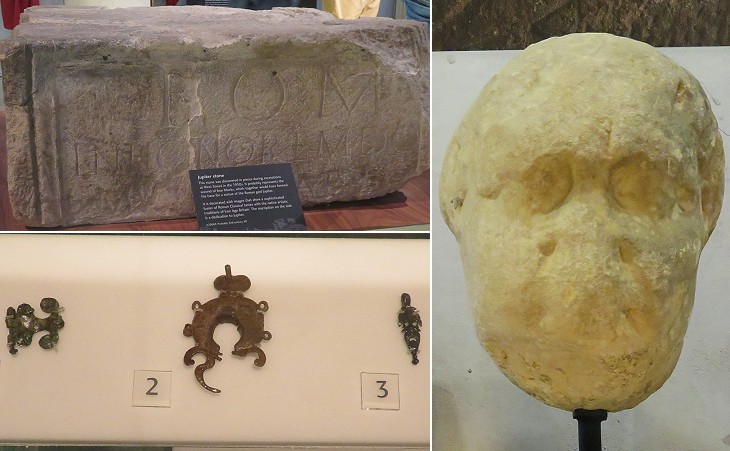 "The Novium": (left-above) part of the pedestal of a statue of Jupiter; (left-below) jewels and amulets which were found in Chapel Street in the centre of Chichester; (right) Bosham Head

The pedestal of a statue was found in 1934 in West Street, the Decumanus Maximus of the Roman town perhaps where the street flanked the Forum. The inscription says that the statue was erected in honour of Domus Divina, the Imperial family, most likely at the time of Emperor Nero. The lettering was finely executed. The acronym I.O.M. stands for Iovi (Jupiter) Optimo Maximo (see the same acronym in Lebanon).
A much worn-out stone head was found in ca 1800 at Bosham, a village between Chichester and Fishbourne Palace, near the natural harbour of the Roman town. Its size would make the whole statue the largest one found in Roman Britain. It might have portrayed Nero, but another option is that it belonged to a statue of Emperor Trajan which was erected by Hadrian, his successor, and was placed at the entrance to the harbour (you may wish to see large statues of these two emperors at the Museum of Antalya). 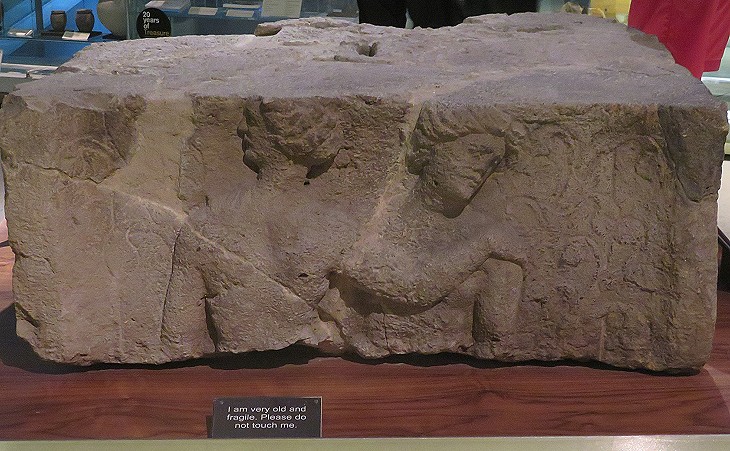 "The Novium": relief on the pedestal of the statue of Jupiter

The rear part of the pedestal was decorated with a fine and light relief depicting two river nymphs between reeds. Their posture recalls that of the Three Graces. It is definitely one of the finest pieces of sculpture which was actually made in Roman Britain, because it was carved in a local limestone. The reeds bring to mind the plants which appear in one of the reliefs of Ara Pacis Augustae in Rome. 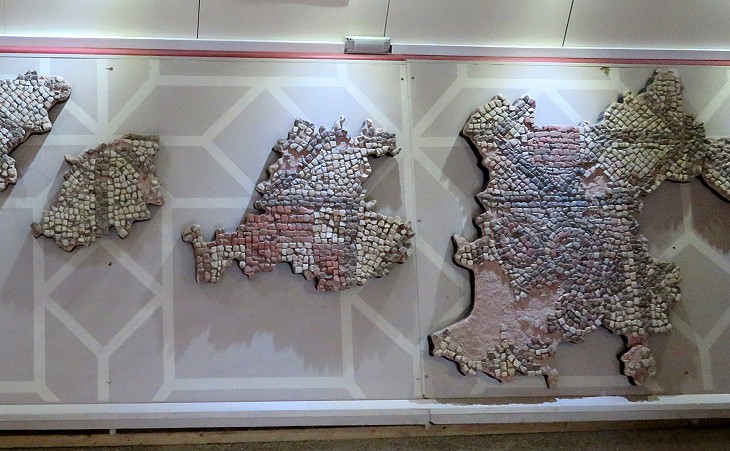 The image used as background for this page shows a pipeclay head of woman which was found in Chapel Street and now on display at "The Novium".