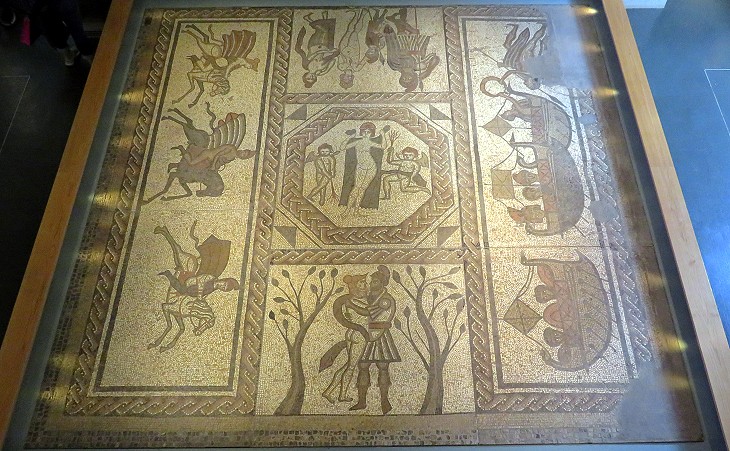 Museum of Taunton, Somerset: mosaic from the "frigidarium" of the Roman Villa of Low Ham

Dorset is named after Dorchester, its county town, which in Roman times was called Durnovaria. Art historians have identified a workshop of mosaic makers which was active at Durnovaria in the IVth century and developed a very distinct type of floor mosaics. The best known example of this "Durnovarian school" is a floor mosaic which was unearthed at Low Ham, a village in Somerset, near the border with Dorset. It was situated in the baths of a Roman villa which was excavated in 1946-1955. It immediately attracted the interest of archaeologists and art historians for its subject as well as for its style. It is now on display at the Museum of Taunton, the county town of Somerset.

The mosaic portrays in five scenes the love between Aeneas and Dido and the role of Venus, Aeneas' mother in it. The scenes are arranged anti-clockwise and are based on passages from the Aeneid, the poem written by Virgil in the late Ist century BC to tell the legendary journey of Aeneas, a Trojan Prince, from his city to Carthage and eventually to the shores of Latium where Ascanius founded Alba Longa (and his heirs Rome). Venus made Aeneas and Dido fall in love with each other; she usually achieved her objectives with the help of Cupid, but in this tale Ascanius, the young son of Aeneas, fulfilled this role. 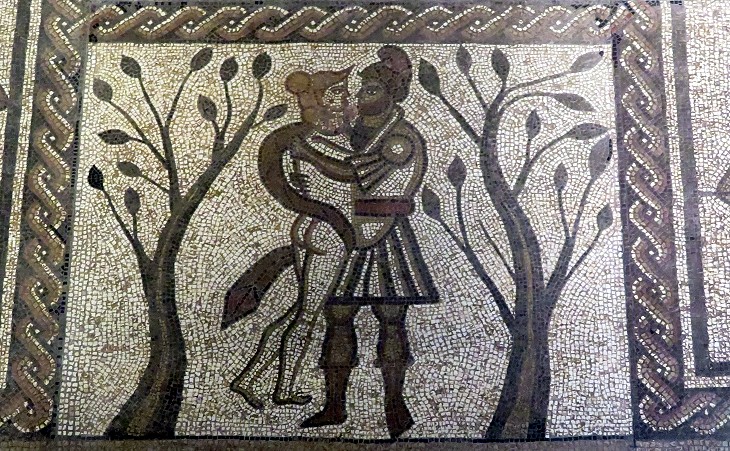 Mosaic from Low Ham: fourth scene: Aeneas embracing Dido (in the Aeneid the scene is set in a cave)

In the Iliad Homer mentioned Aeneas and the fact that he was repeatedly saved from death by his mother and other gods, but he was seldom portrayed in Greek reliefs and vases. The Trojan prince was made very popular by the Aeneid, yet events of his life were rarely depicted in Roman frescoes and mosaics. The same applies to Dido who killed herself and cursed Aeneas when he abandoned her to comply with Jupiter's order to seek the land of Italy. The choice of this subject and a reference to the Aeneid in a mosaic at the Roman Villa of Lullingstone, which is stylistically very similar to that at Low Ham, suggest that the poem was very popular in Roman Britain in the IVth century; perhaps in that very turbulent period the myth of Aeneas was regarded as a symbol of the divine protection over Rome as spelled out by Anchises, Aeneas's father: Roman, it is for you to rule the nations with your power, (that will be your skill) to crown peace with law, to spare the conquered, and subdue the proud. Book VI - translation by A. S. Kline 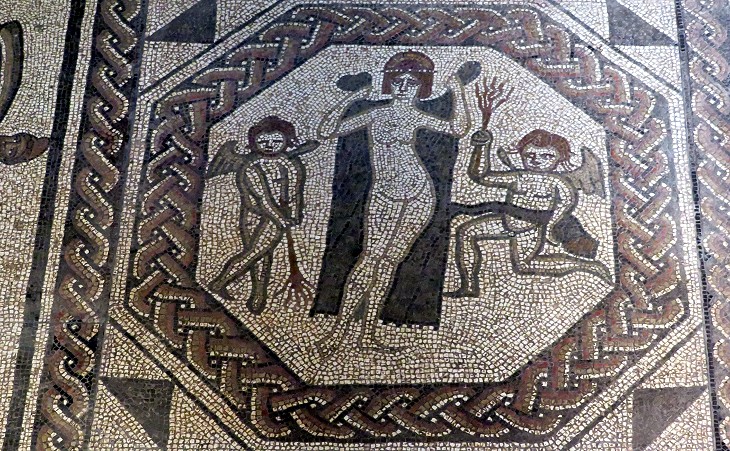 Balnea vina Venus corrumpunt corpora nostra sed vita faciunt (Bathing, wine and love ruin our bodies, but bathing, wine and love make life worth living) is written in a funerary inscription of the Ist century. Venus was often portrayed inside bath establishments (e.g. at Terme dei Sette Sapienti at Ostia), but in this mosaic the stress is on the divine powers of the goddess who gives and takes life, rather than on her beauty. Cupids or genii holding an upside down torch were often portrayed on sarcophagi and this scene conveys a feeling of sadness, rather than joy. From a stylistic viewpoint the key characteristic of the "Durnovarian school" is very evident in the scene being similar to a drawing, rather than to a painting. 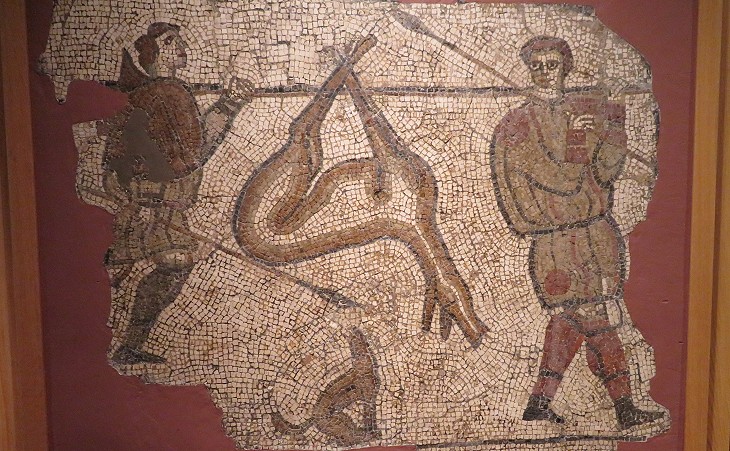 The villa was first discovered in 1753 and a large floor mosaic which was found there was described in the Gentleman's Magazine of that year, but it is lost. It showed two women attending a third one who lay on a couch. The fragment above illustrates the return from a hunt, a pastime which allowed the practice of war skills in time of peace and was therefore very popular among the wealthy Romans who lived in the countryside in all the provinces of the Empire. Mosaics at Villa del Casale in Sicily and in Tunisia show scenes similar to that at East Coker (also the garments worn by the huntsmen are very similar). 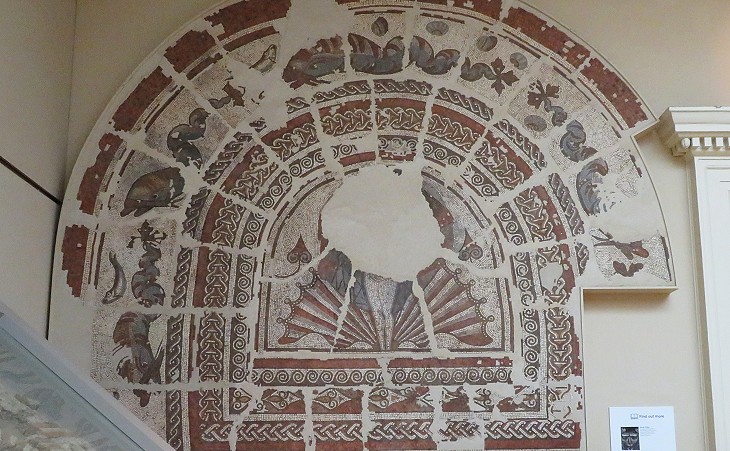 This mosaic decorated the apse of the oecus (main hall) of a Roman villa which was discovered in 1908. The shape of the oecus was similar to those at Vienne in France and at Bad Kreuznach in Germany. The mosaic was broken into many fragments which were moved to the British Museum where they were reassembled. The shell was a decorative motif very suited for the floor mosaic of an apse and it was used for the same purpose at Verulamium; here it was associated with Venus who rose from the sea of Cyprus (see beautiful mosaics showing the goddess and a shell at Trier and at Philippopolis and a fresco at Pompeii). 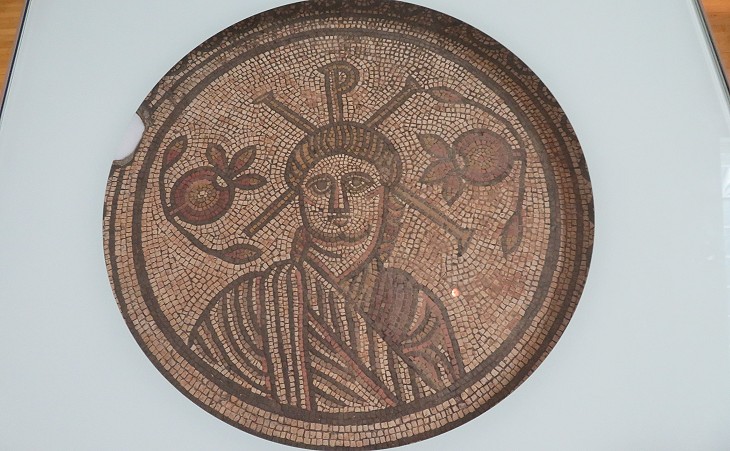 The medallion was part of a large floor mosaic which depicted the Four Seasons, hunting dogs and Bellerophon slaying Chimera, all subjects which can be seen in other Roman mosaics in Britain which are not regarded as having a Christian connotation. Together with frescoes at Lullingstone the medallion is on display at the British Museum as evidence of Christian art in Roman Britain. Initially it was thought to portray Emperor Constantine, but so many details were inconsistent with the iconography of that emperor that it is now labelled as Jesus Christ with a Chi-Rho behind his head (his Greek monogram which is usually completed by alpha and omega - see some funerary Christian mosaics in Tunisia). Also this identification sparked a debate.
The design is eclectic and the Christian device is ill-matched with the Pagan theme of Bellerophon slaying the chimaera in the other section. The odd juxtaposition of subjects suggests that the patron had his own meaning for what was shown. (..) The iconography is odd as the style.
Martin Henig - The Art of Roman Britain - 1995 - B. T. Batsford Ltd.
In 2014 the BBC program A History of the World in 100 Objects covered this mosaic. Sam Moorhead, National Finds Advisor at the British Museum, said: The Hinton St Mary mosaic can provoke debates about Christian iconography and Christianity in Britain, but it also asks us to consider what inspired its designer in Dorset. I have argued before that the villa owner or mosaicist was inspired by a coin of the emperor Magnentius (AD 350-353) which was struck in large numbers at Amiens, Trier, Lyon and Arles in France in AD 352-353. It is the first overtly Christian coin (it opens in another window) ever to be struck in the Roman Empire. If one looks at the reverse of the coin, one sees a prominent Christian symbol, the chi-rho, between an alpha and omega. (..) The obverse shows the bare-headed bust of the emperor with a distinctive chin and swept back hair. Comparison with the head of Christ on the mosaic immediately shows that there are similarities. I believe that the head of Magnentius has been turned to face us on the mosaic, the hairstyle and prominent chin of the emperor being preserved on the mosaic. Furthermore, the Chi-Rho has been placed behind the head of Christ, in a way mirroring its appearance on the reverse of the coin. The artist has changed the image slightly, giving Christ a tunica and pallium instead of an imperial cloak and military cuirass. Furthermore, the alpha and omega are replaced by pomegranates, figurative images of eternal life commonly used in the ancient world.
From an iconographical point of view the image could derive from that of Helios with the head surrounded by sun rays (see examples in mosaics in Israel and Germany and in a relief portraying Sol Invictus in Rome). Metal detecting became such a fashionable hobby in Britain (also thanks to the massive production of coinage by the Romans) that in 1981 the National Council for Metal Detecting was formed to represent the interests of category. In 1996 the Treasure Act was issued to regulate the reporting of the finds and the rewards for the finder and the owner of the land. 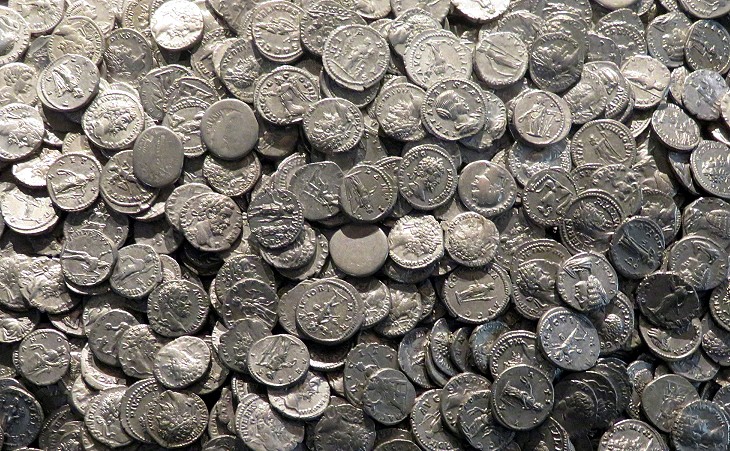 The image used as background for this page shows a small bronze furniture decorative piece at the Museum of Taunton.