Portsmouth Naval Base has been an integral part of the city since 1194. It is home to almost two-thirds of the Royal Navy's surface ships, including the new aircraft carrier HMS Queen Elizabeth, the formidable Type 45 destroyers, Type 23 frigates and mine countermeasures and fishery protection squadrons.
From the website of Her Majesty's Naval Base Portsmouth
Portsmouth is the heir of Portus Adurni / Portchester Castle, a Roman and medieval harbour and fortress situated a few miles away in a coastal inlet on the eastern arm of The Solent, the strait between mainland England and the Isle of Wight. 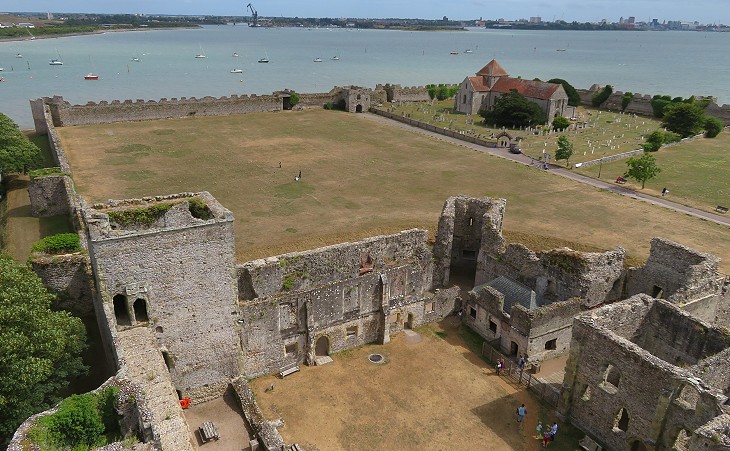 Roman fortress seen from the main tower of Portchester Castle

Portus Adurni has the traditional square shape of a castrum, a Roman military encampment. Today the north-eastern quadrant is occupied by the remains of a medieval castle, whereas the south-western one houses the Parish Church of St. Mary and its cemetery which was initially built for an Augustinian abbey. The interior of the fortress does not retain evidence of its Roman past, but the external walls and their semicircular towers are almost intact.

The fortress had two main gates: one on the land/northern side and the other on the harbour/southern side. The gates were redesigned in the XIVth century, but they stand on the site of the ancient ones; also the moat which protected the land side is of the medieval period, but it is likely that a similar ditch existed in Roman times. Portus Adurni is mentioned in Notitia Dignitatum, a document of the early Vth century listing towns, administrative centres, army units, and other data on the structure of the Late Roman Empire. It is included in a list of Roman forts which were built to protect Southern England from raids by Saxon pirates in the late IIIrd century; its association with Portchester is based on the similarity between portus and port because no supporting epigraphic evidence was found in the fortress; in the past it was thought that Portus Adurni was near Brighton. Roman towers on the harbour/southern side

The fortress was most likely built by Marcus Aurelius Carausius, a Roman commander who was charged in 285 by Co-Emperor Maximian with stopping the raids of Saxon pirates along the coasts of Britain and Gaul. In order to achieve this objective Classis Britannica, a sizeable war fleet, was raised. Carausius was suspected of connivance with the pirates and to escape punishment he declared himself Emperor of Britain and of Northern Gaul.
The size of the fortress suggests that perhaps it was built by Carausius after the "declaration of independence" in order to withstand an attack by a large army of "loyalists". 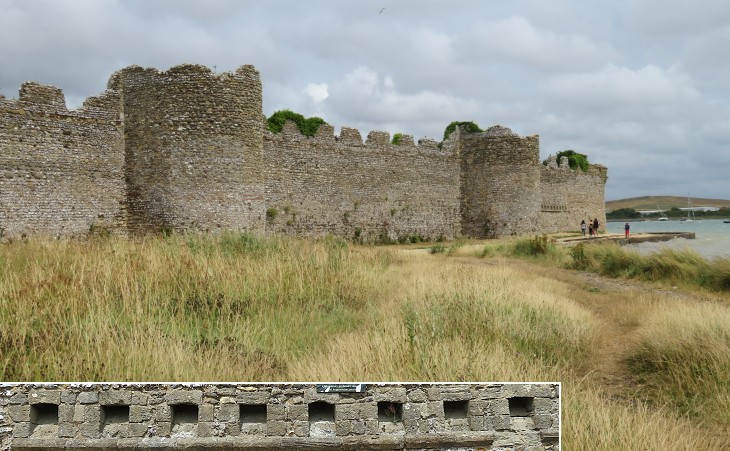 The second half of the IIIrd century was a very turbulent period in the history of the Roman Empire. The defences on the Rhine and the Danube were overrun by hostile tribes who sacked towns in Italy and Greece and the same did the Sassanids in Syria. In 275 Emperor Aurelian ordered the construction of walls to protect Rome, because even the Capital of the Empire needed them. The pattern developed for the walls of Rome is the same which was applied for Portus Adurni. The towers of Rome were generally square, but those near the gates were often round, e.g. at Porta Pinciana. They were placed at a distance of a hundred Roman feet which corresponded to a standard arrow shot, but the distance at Portus Adurni is greater. 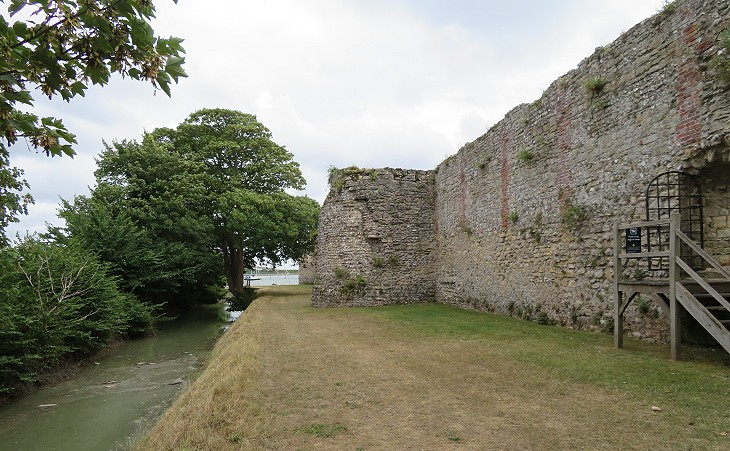 Carausius' warships defeated Classis Germanica, the Rhine fleet, but in 293 he lost control over Northern Gaul and was killed by Allectus, his treasurer and deputy (see some coins they minted in the introductory page). By 296 the rebellion was put down by Constantius Chlorus, Caesar (Vice-Emperor) for this part of the Empire. The Roman garrison was most likely withdrawn in the early Vth century. We may assume that Portus Adurni housed the residence of an important military commander, but no clear evidence of it was found.
In the following centuries the walls surrounded a farm, because most of the land inside them appears to have been ploughed. 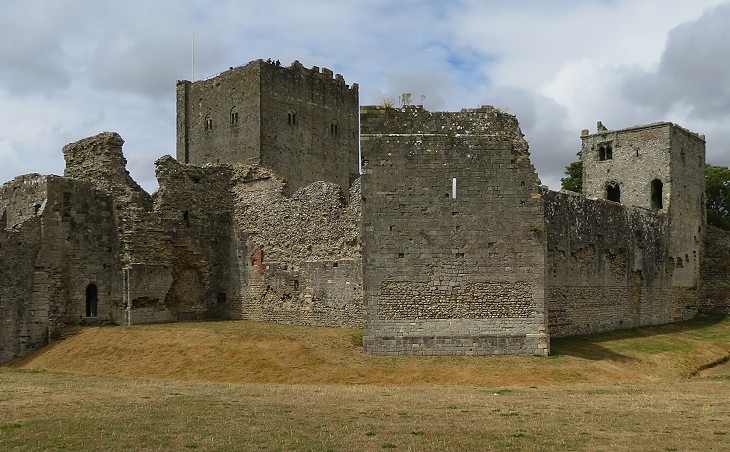 In the Xth century Portus Adurni returned to be a fortified site; a proper castle was built on its north-eastern corner in the late XIth century, most likely by William Maudit, a close associate of William the Conqueror. A few years later, in ca 1120, the south-eastern corner of the fortress was assigned to Augustinian monks who built there an abbey which in part made use of the external walls. A garderobe is the only remaining evidence of their stay at Portchester because some twenty years later they moved to Southwick, a small village north of Portsmouth. 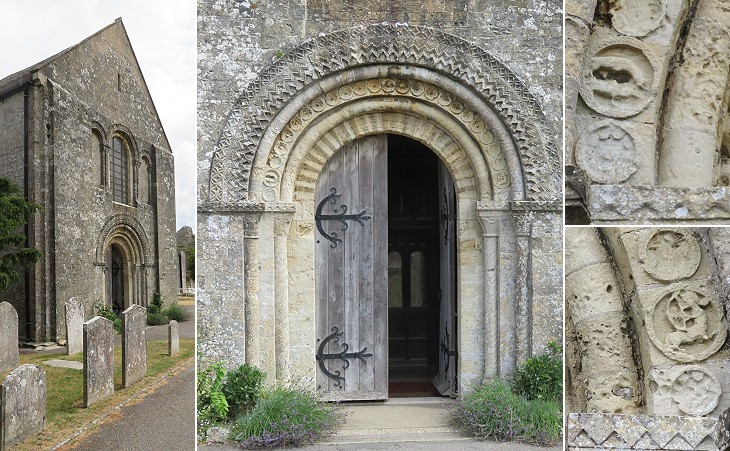 St. Mary's belonged to the abbey until its dissolution in the 1530s when it became a parish church. This indicates that at the time the inner castle and the land within the walls housed a relatively large community. The building retains its Norman portal with a very complex decoration (you may wish to see a Norman side portal of the Cathedral of Le Mans).
The image used as background for this page shows a detail of the decoration of the façade. 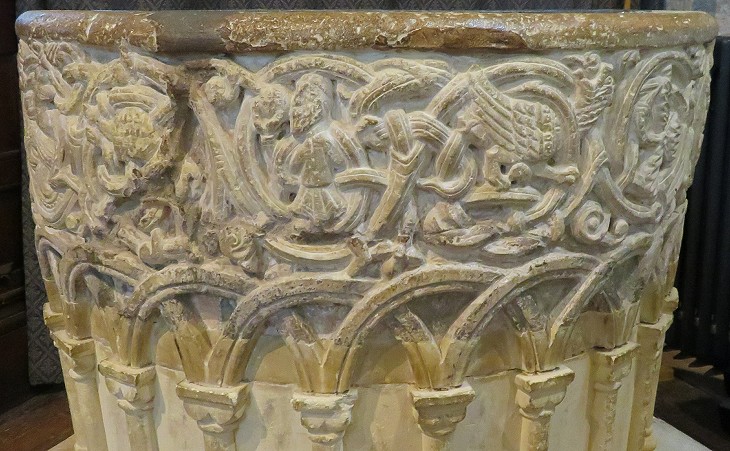 The interior of the church was repeatedly modified, in particular in 1888, but it retains a XIIth century baptismal font, carved in Caen limestone. Caen was one of the main Norman towns, thus the capital was likely made there. 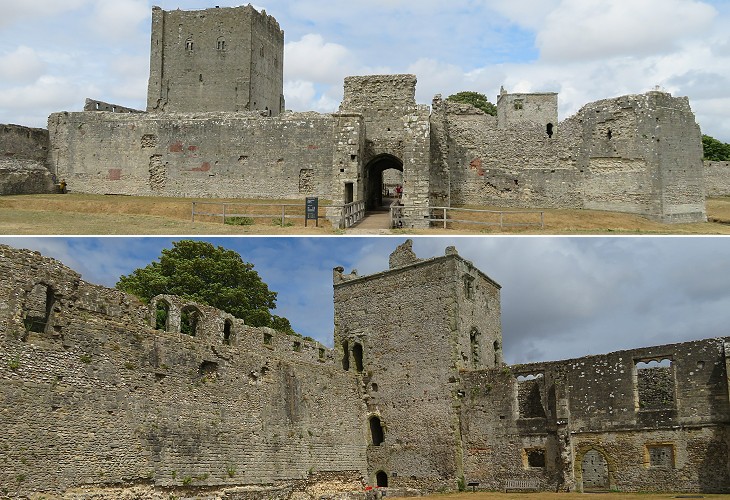 Inner Castle: (above) exterior; (below) interior

Portchester Castle is a noble square pile with numbers of equidistant round towers on every side, many venerably clothed with ivy; each part faces a point of the compass. The interior court is above four acres in extent and has the ruins of several apartments on the sides some very large and once truly magnificent. The Keep is also a square and is strengthened by four square towers one of which is very large and stands on an angle of the exterior wall of the castle. A gate leading from the outermost to the inner court is very much to be admired for simplicity and strength.
Thomas Pennant - A Journey from London to the Isle of Wight - 1801

In the XIVth century the castle was greatly strengthened by King Edward II and at the end of the century King Richard II built new grand apartments; he and his successors often stayed there, especially on the eve of military expeditions to France. The castle continued to have a role in the defence of England, but, because it was not upgraded to the requirements of cannon warfare, in the XVIIth century it was sold by the Crown to a local landowner. 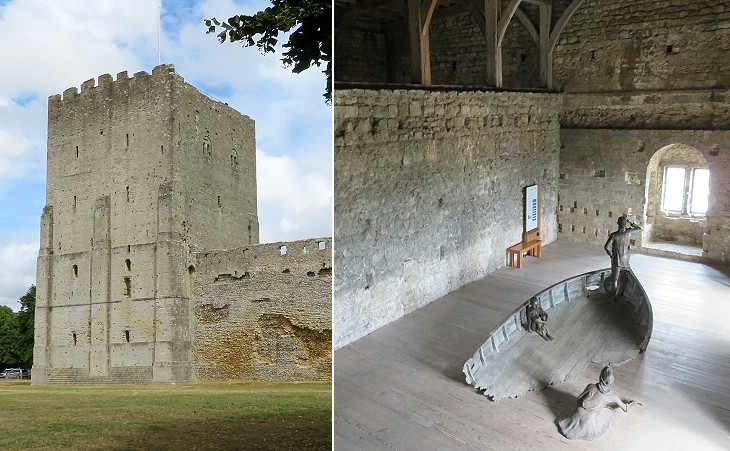 Inner Castle: (left) main tower; (right) Monument to the Caribbean prisoners of war inside the tower

I have also surveyed Portchester Castle the buildings of which are wholly unoccupied and together with the surrounding walls are in a state of perfect ruin and decay. (..) The square tower at the north west angle which was used for the confinement of French prisoners during the war is the most ancient part of the edifice. (..) The tower is very lofty and rising above the surrounding walls is seen from a considerable distance. The tower has been divided into seven stories by timber floors. (..) A wooden staircase leads to each floor and at the top there has been an embattled parapet which is now in ruins. (..) The timbers of the several floors are in want of repair. The tower is the only part of the castle which has been tenantable for centuries but the walls of it are in a state of extreme decay having large chasms in many parts. I do not consider this tower can in any efficient manner be converted into separate cells for the confinement of prisoners as these would require openings in each cell for light and air which it would be impracticable to form in the present walls. (..) After a mature consideration of all the local circumstances I cannot recommend the appropriation of these premises to a prison for the confinement of juvenile criminals as it would be necessary to construct entire new buildings for this purpose.
George Thomas Bullar - Report relating to plans for a juvenile prison - 1836
The government often rented the castle from its owners to house captured enemy soldiers. In particular this occurred when the British conquered the island of St. Lucia in 1796 and the defending soldiers and their families were taken as prisoners of war (or perhaps slaves) and sent to Portchester.