On July 18, 1811, George Tupper was cutting his ploughshare through the rich soil of "The Berry" - one of the strips he farmed in the northern shadow of the South Downs at Bignor. With a sickening crack, the plough suddenly jarred to a halt, provoking startled whinnies from the tethered horses. Puzzled, George heaved himself from the plough seat and knelt down to inspect the earth. He did not know it at the time, but the vividly coloured patterns surrounding the stone water basin he had uncovered would turn out to be part of one of the most detailed Roman mosaics discovered in northern Europe. Over the next six years, local MP John Hawkins and leading antiquarian Samuel Lysons uncovered the remains of an unusually grand Roman residence at the centre of an estimated 2,000-acre farm estate. (..) Farming looks very different in 2019, but the Tupper family still owns and works the land around Bignor, while continuing to preserve the villa's charms for visitors young and old.
Louisa Jones - Chichester Post - May 24, 2019 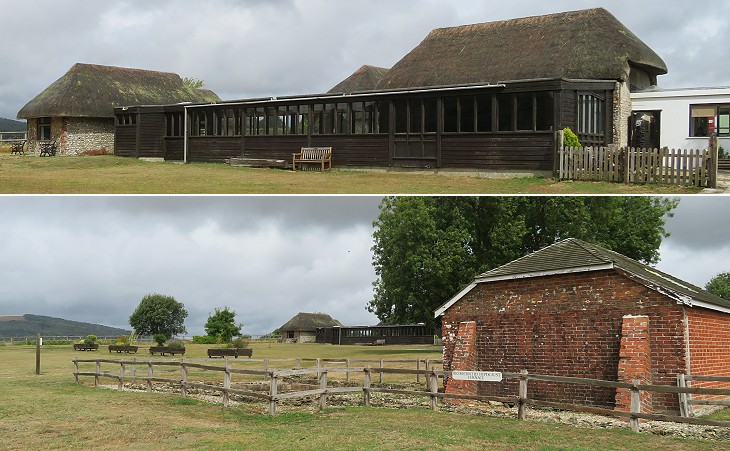 At the peak of its development in the early IVth century the villa was a large structure which included lodgings for servants, stables, warehouses, etc. in addition to a residential area, similar to what can be seen at Villa dei Volusii in the Roman countryside. The life of the landlord of Bignor was perhaps similar to that of Dominus Julius in his countryside villa near Carthage, as portrayed in a famous mosaic in the Museum of Bardo in Tunis. 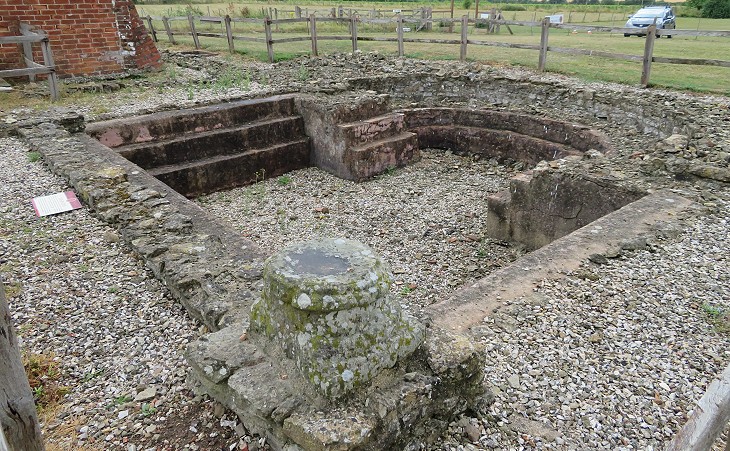 Reconstructed "natatio" (pool) of the baths

The residential area of the villa is situated in the North Wing whereas small private baths have been found at the opposite end of the structure; maybe another residential apartment was located in the (lost) South Wing and it had direct access to the baths. 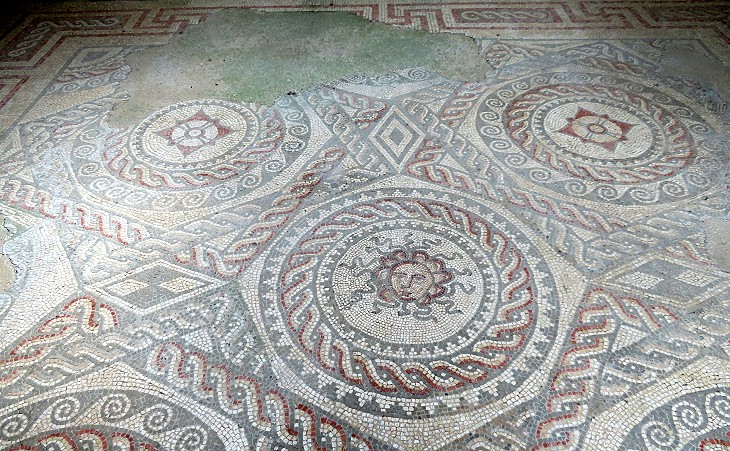 The very frequent depiction of Medusa, especially on sarcophagi, is due to the monster being credited with the power of chasing evil spirits. Its head surrounded by snakes was an excellent subject for an emblema (medallion with figures) at the centre of a floor mosaic and it can be seen also at the Roman Villa of Brading. The quality of the Medusa mosaic is inferior to that of those found in the North Wing and most likely it was made at an earlier time. 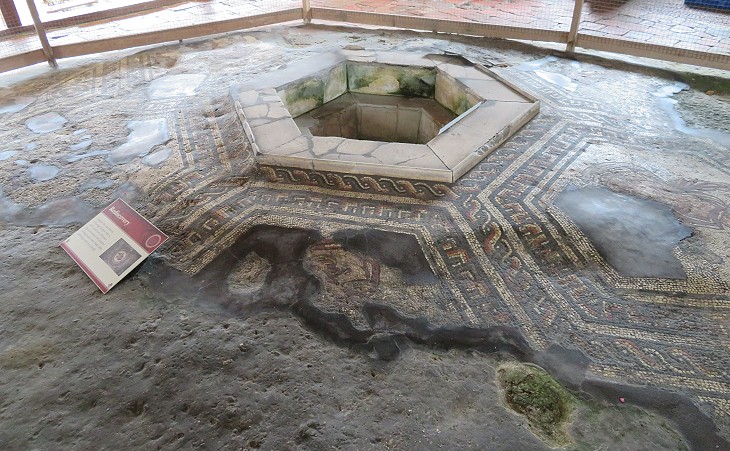 Fountain in the Summer Dining Room

The residential area in the North Wing has the size of a large modern apartment and it is dated first half of the IVth century, after Constantius Chlorus and his son Constantine had fully restored Roman control over Britain in 305-307. The rooms are rather small, but their design shows familiarity with features which gave distinction to Roman luxury mansions, e.g. a small fountain in the room where the landlord received his guests, as one can see in the Roman Villa of Bad Kreuznach in Germany. It is possible that the owner of Bignor at the time the North Wing was developed was a civilian or military adviser to Constantine when the Emperor set his residence at Trier. 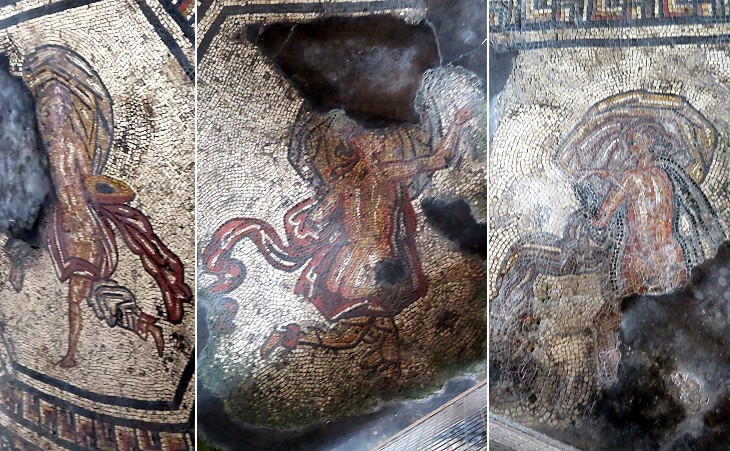 The large part of the room is subdivided into six irregular hexagonal compartments within which are figures of dancing nymphs much in the style of those which appear in the Roman paintings discovered in Italy; one of them has been quite destroyed, but enough remains of the other five to indicate what has been the dress and attitude. (..) In the centre of the room is an hexagonal piscina or cistern of stone with a step at about half its depth. At the bottom is a round hole connected with a leaden pipe for carrying off the water, part of which was discovered very entire on the outside of the building.
Samuel Lysons - An Account of the Remains of a Roman Villa Discovered at Bignor - 1815 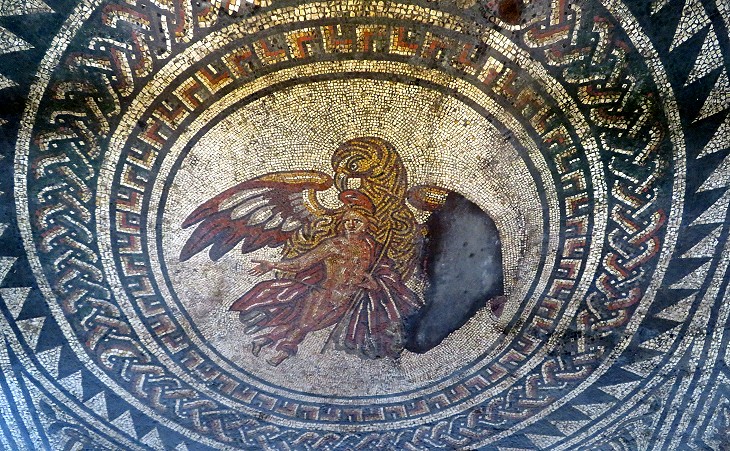 Ganymede was the most beautiful youth alive and therefore chosen by the gods to be their cup-bearer. It is said that Zeus, desiring Ganymede also as his bedfellow, disguised himself in eagle's feathers and abducted him.
From Robert Graves - The Greek Myths.
The Loves of Zeus provided mosaic-makers with an opportunity to show their talent in the depiction of very different scenes; the portrayal of Zeus and Ganymede in isolation hinted to a sexual relationship between an adult male and an adolescent male (see some mosaics in Tunisia), but this aspect was not highlighted in this mosaic. A statue of Zeus and Ganymede had a prominent place in the Palace of Emperor Tiberius at Sperlonga and a mosaic depicting the same subject was found at Emperor Hadrian's villa at Tivoli. 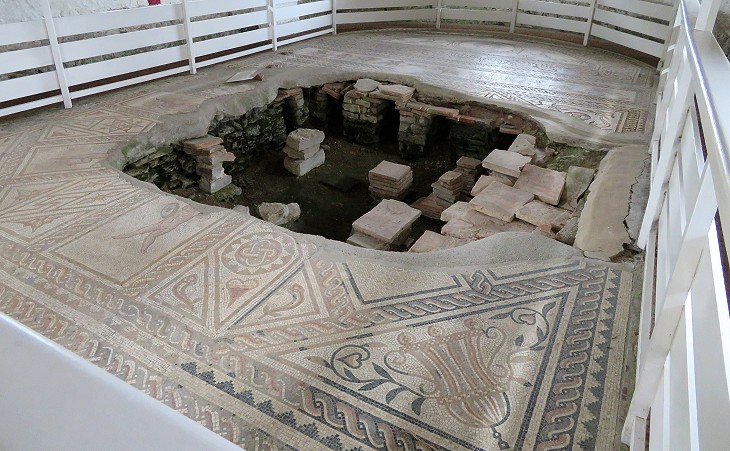 Winter Dining Room with evidence of its hypocaust (heating system)

This room is today associated with Winter because it could be heated, while that with the fountain could not.
A very fine mosaic pavement was discovered (..) which proved to be a parallelogram of twenty-two feet by nineteen feet (..) with a semicircular recess at the north end. (..) There were eight small oblong compartments meeting towards the centre where they must have formed an inner octagon, none of which remained as this part of the pavement had been entirely demolished, evidently by the fall of the roof which had forced several fragments of it down into the hypocaust, a large portion of which was laid open and several of the piers of stone with brick tiles laid on them became visible. Lysons 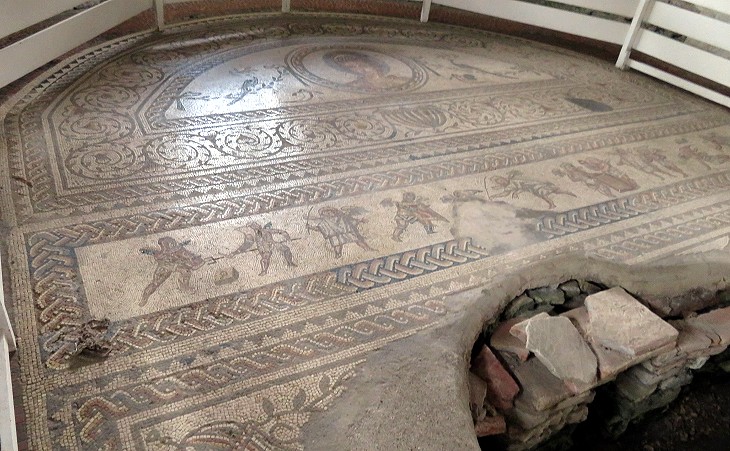 Winter Dining Room: mosaic in the section with the apse

The room, similar to larger halls at Lullingstone and Vienne, has the shape of a rectangle with an apse at one end. It is rather small, so only a limited number of people could attend a dinner there, yet its floor mosaic had a very complex design in which a band depicting Fighting Cupids stands out among other more traditional subjects.
The image used as background for this page shows a detail of the floor mosaic of this room. 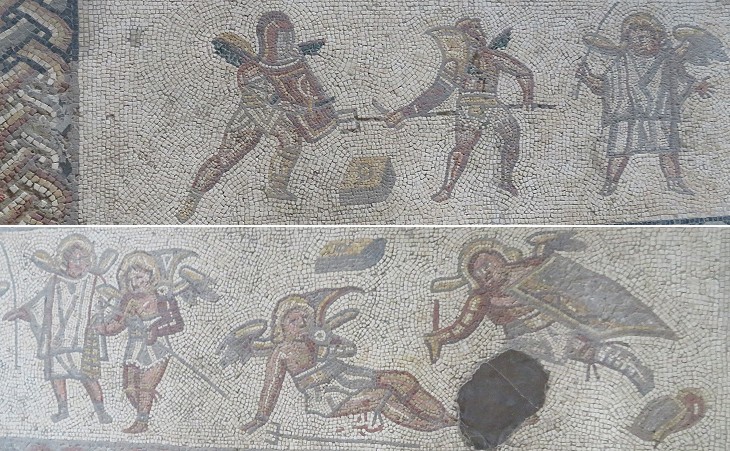 The oblong compartment on the north side of the room (..) contains twelve figures of cupids or genii habited as gladiators and exhibits a very complete representation of the costume of the retiarii and secutores. (..) The Retiarii appear as they are described by the Roman writers with their heads uncovered and with a trident in their left hands. The net by which they endeavoured to entangle their adversaries appears in the right hand of the one who is preparing for the combat. They are all provided with a short sword which they hold in the left hand with the trident. Here also appear the Rudiarii, or veteran gladiators, who, having been presented with a rod as a token of manumission, instructed the young beginners and regulated the combats. The subject of this compartment seems to have been designed to represent four different scenes in which the same parties are engaged. In one they are seen preparing for the combat, in another just engaged in it, in a third the retiarius is wounded and the rudiarius is coming to his assistance, in the last he is fallen disarmed and wounded in the thigh. Lysons
A detail of a floor mosaic at the Roman Villa of Nennig in the Mosel Valley depicts a combat between a secutor and a retiarius at the presence of a referee and the Middleborough Mosaic of Camulodunum depicts two Wrestling Cupids, so perhaps the mosaic at Bignor was based on cartoons showing these or similar mosaics, yet the result is very original and it shows a high degree of inventiveness. Other landlords who decorated their homes with mosaics showing gladiatorial combats wanted them to be depicted in a very crude way, e.g. at Torrenova in the outskirts of Rome. (left) Winter, a fragment of a mosaic depicting the Four Seasons in a small room (see Winter in a mosaic from Ostia); (right) dolphin and two letters in a mosaic at the end of a long corridor

Only one of these compartments remained entire containing a representation of the head of Winter, clearly indicated by the manner in which all but the face is enveloped in clothing and by the leafless branch which accompanies it; in the other three divisions no doubt had been heads of the other Seasons. (..) Oval compartments in the spandrels of the circle were ornamented with figures of which part of a boy, a dolphin, and a pheasant with a cornucopia remained, with the letters TR in one of the angular spaces between the hexagons. The second letter seems to have been intended for a combination of E and R. Lysons
Today it has been speculated that the letters stood for TER(entius), the name of the mosaic-maker. It is a rather far-fetched hypothesis. 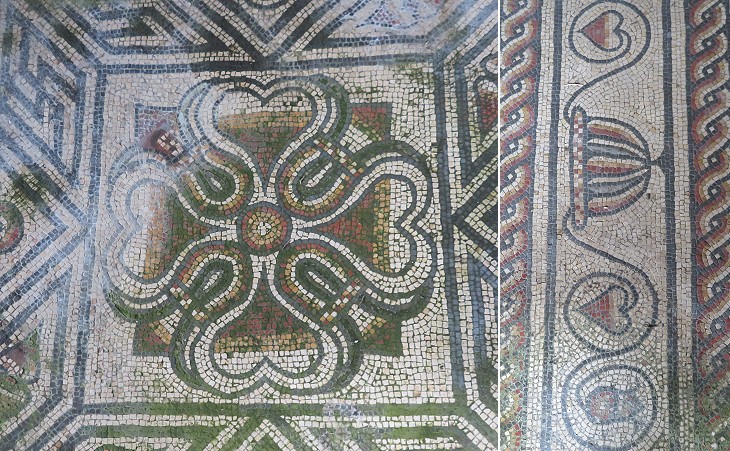