- Camulodunum (Colchester)
(Didcot Hoard at the Ashmolean Museum of Oxford)

(left) Plan of the Roman Town and an elephant (read below); (right) High Street on the site of the Decumanus Maximus, the main east-west street of a Roman town

Aulus Plautius, a senator of great renown, made a campaign against Britain, but he had difficulty in inducing his army to advance beyond Gaul. For the soldiers were indignant at the thought of carrying on a campaign outside the limits of the known world. (..) The Britons, so far from yielding, united all the more firmly. (..) Because of this fact (..) Plautius became afraid, and instead of advancing any farther, proceeded to guard what he had already won, and sent for Claudius. For he had been instructed to do this in case he met with any particularly stubborn resistance, and, in fact, extensive equipment, including elephants, had already been got together for the expedition. When the message reached him, Claudius entrusted affairs at home (..) to his colleague Lucius Vitellius, (..) and he himself then set out for the front. (..) He crossed over to Britain, where he joined the legions that were waiting for him near the Thames. Taking over the command of these, he crossed the stream, and engaging the barbarians, who had gathered at his approach, he defeated them and captured Camulodunum, the capital of Cynobellinus. Thereupon he won over numerous tribes, in some cases by capitulation, in others by force. (..) He deprived the conquered of their arms and handed them over to Plautius, bidding him also subjugate the remaining districts.
Cassius Dio - Roman History - Book 60 - Loeb Edition
A colony was settled on conquered lands at Camulodunum by a strong detachment of veterans, who were to serve as a bulwark against revolt and to habituate the friendly natives to their legal obligations.
Cornelius Tacitus - Annals - Book XII - Loeb Edition

Colchester Castle on the platform of a Temple to Claudius; see tombstones of legionaries who died at Camulodunum in the introductory page

The temple raised to the deified Claudius continually met the view, like the citadel of an eternal tyranny; while the priests, chosen for its service, were bound under the pretext of religion to pour out their fortunes like water. (..) Relying on the protection of the temple, and hampered also by covert adherents of the rebellion who interfered with their plans, the veterans neither secured their position by fosse or rampart nor took steps, by removing the women and the aged, to leave only able-bodied men in the place. They were as carelessly guarded as if the world was at peace, when they were enveloped by a great barbarian host. All else was pillaged or fired in the first onrush: only the temple, in which the troops had massed themselves, stood a two days' siege, and was then carried by storm. Tacitus
In 61 the rebels, led by Boudicca, Queen of the Iceni, a tribe of Norfolk, razed Camulodunum to the ground and then conquered Verulamium (St. Albans) and Londinium (London) before being defeated in open battle. 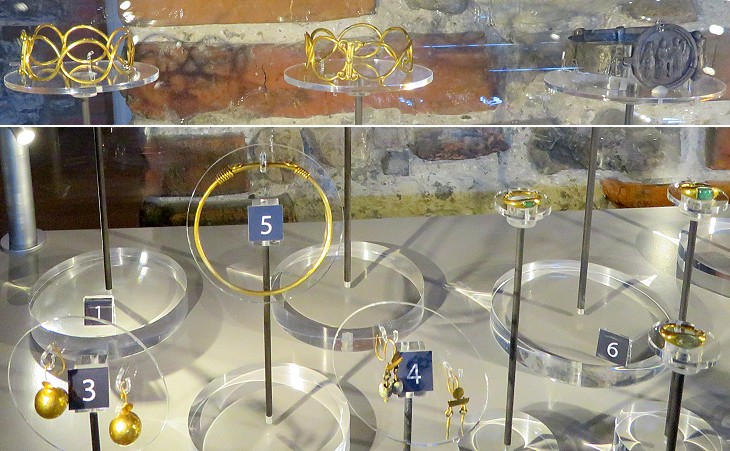 In 2014 a small hoard of silver and gold jewellery plus some coins was found in excavations ahead of development of a store in central Colchester. It was hidden under the floor of a house with burnt remains of furniture which was destroyed by the Iceni when they sacked the town. 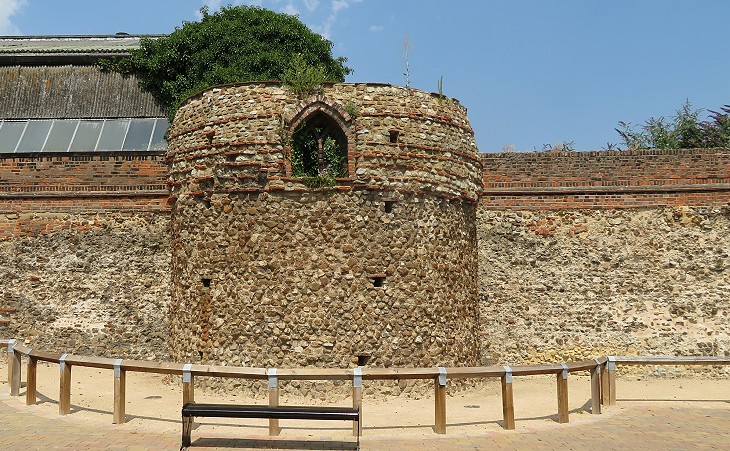 Roman walls along Priory Street, see a better preserved section of these walls in the introductory page

New walls were built to protect Camulodunum in 61-80 AD; they were repeatedly restored and strengthened with new towers during the Middle Ages and beyond, especially after the Peasant's Revolt in 1380 and the Civil War Siege of Colchester in 1648. 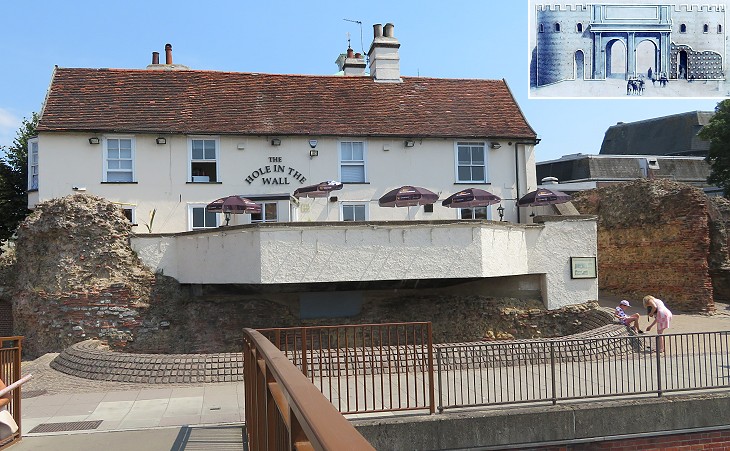 This was the western gate of the town from where a road led to Londinium; although flanked by two round towers, its purpose was more celebratory than defensive; its layout with a total of four passages is similar to Porte d'Auguste at Nîmes and to the two Roman gates of Autun, an indication that the military engineers who designed it might have come from Gaul. 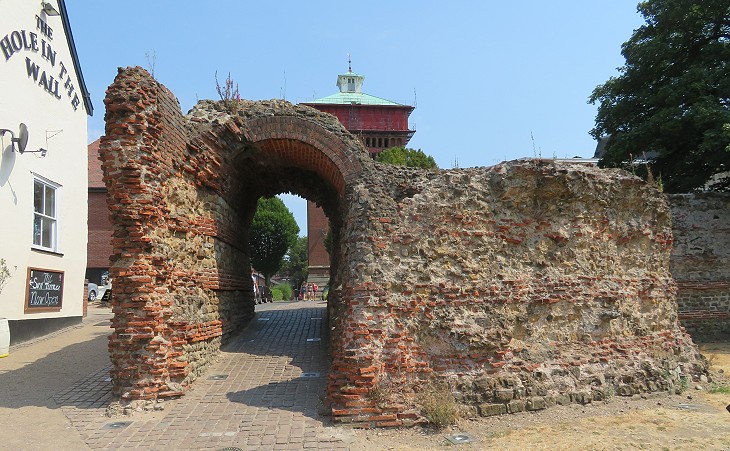 The gate has lost its facing of ashlars of tufa or limestone and its remains show the wide use of fired bricks and mortar, which is typical of Roman construction techniques. Because the manufacturing of fired bricks was reintroduced to Britain in ca 1200 many Roman monuments, including Balkerne Gate, were dismantled to employ their bricks in the construction of new buildings.

In ca 1085 the Normans built a castle above the platform of the Temple to Claudius. Entire sections of the Roman walls (or perhaps floors) in opus spicatum were utilized in the new building which today houses the Museum of Colchester. 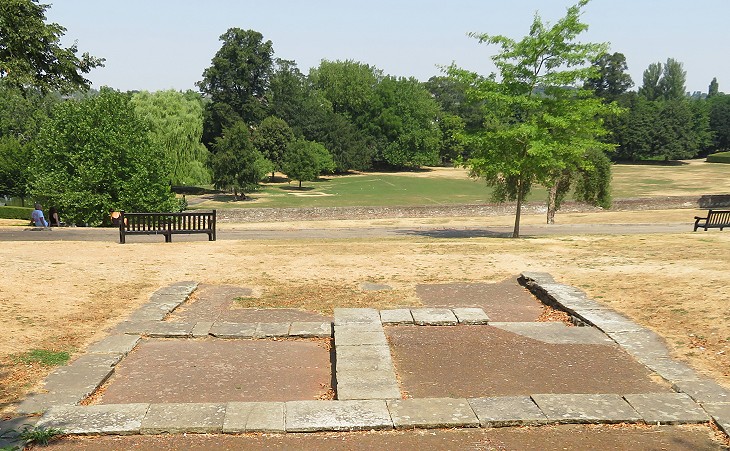 Although a cursory visit to Colchester does not prompt recollections of Pompeii or Ostia Antica, archaeologists have identified the overall layout of the Roman town and the location of forty insulae, blocks of Roman buildings (houses, shops, other facilities). Fragments of ancient floors and walls are noticeable in the city parks, but many more lie in the basements of later constructions. 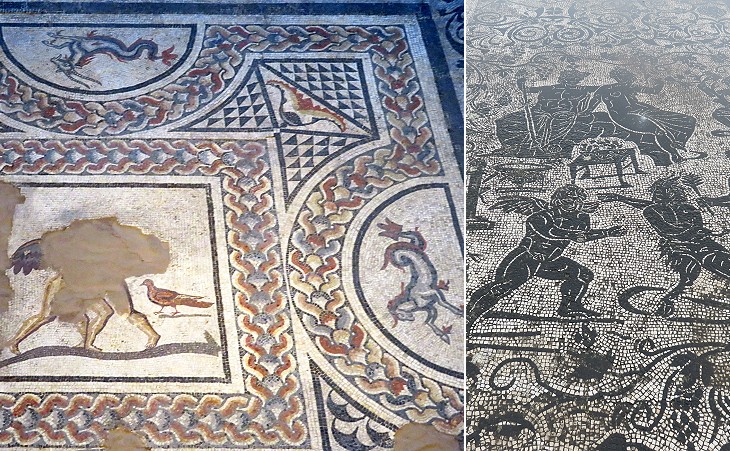 (left) Colchester Museum: Mosaic of the Wrestling Cupids aka Middleborough Mosaic (the observing bird may be a dove which symbolizes Venus); (right) a similar mosaic at the "Domus di Bacco e Arianna" at Ostia

The Middleborough mosaic was found in 1979 and is dated ca 150-175. The design and the subject suggest it was made for a highly Romanized customer, because wrestling and in general exercising was widely practiced by the Romans and Cupids were often portrayed in Roman reliefs and mosaics. Cupids were also portrayed as fighting gladiators in a mosaic at the Roman Villa of Bignor. 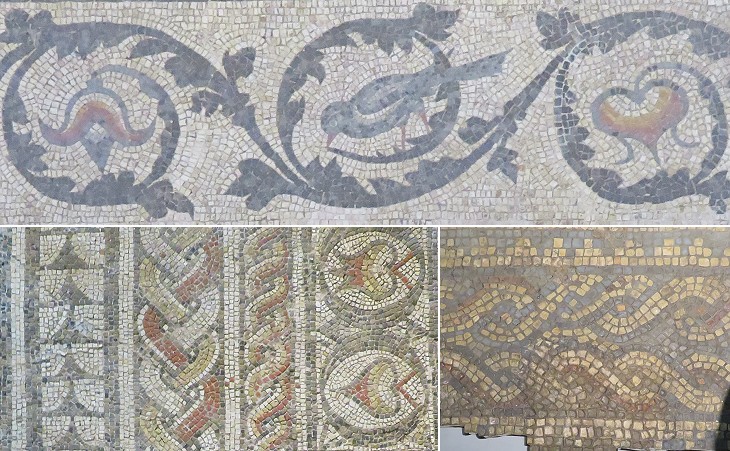 Colchester Museum: (above) detail of the Middleborough Mosaic, an "inhabited acanthus scroll" which can be seen elsewhere in the Roman Empire e.g. at Corinth; (below) details of other mosaics

As to the general level of civilization, in domestic or public building, the impressive testimony is still provided by its mosaic pavements, largely the fruit of chance discovery and largely no doubt domestic. Their distribution is thickest in the western two-thirds of the town, showing that here lay the concentration of wealth and urbanization.
M. R. Hull - Roman Colchester - Oxford University Press - 1958 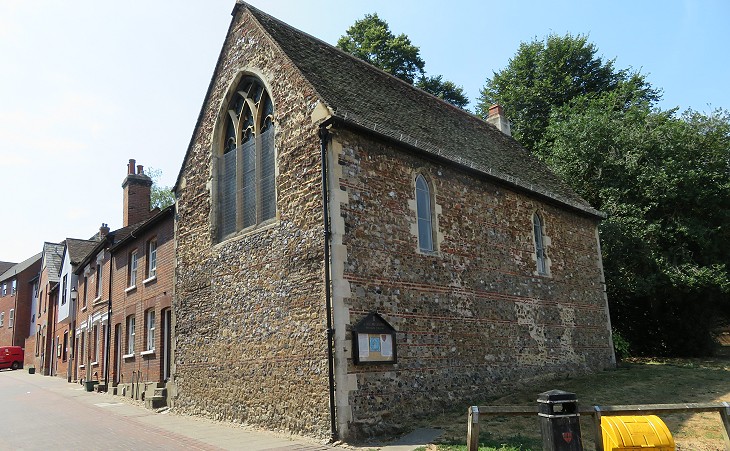 By analysing the layout of some buildings which together formed part of a circle, archaeologists have hypothesized the existence of a theatre in town, not far from the Temple to Claudius. Clearer evidence of a theatre was found at Gosbecks Farm, three miles south of Colchester. 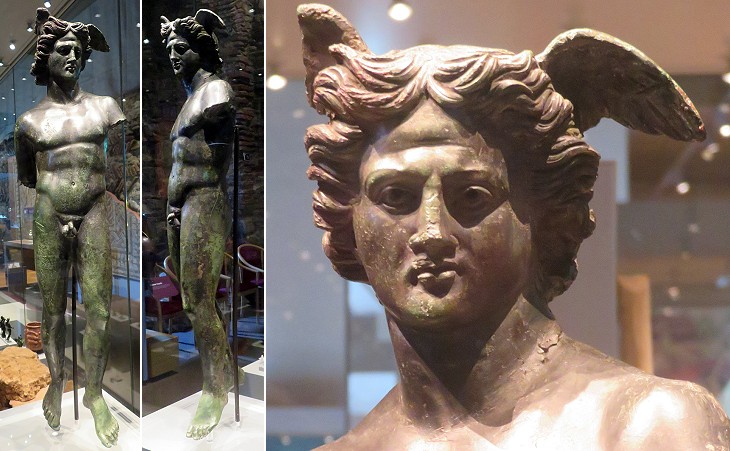 The archaeological excavations at Gosbecks Farm identified a late IInd century temple in addition to the theatre. A small statue of Mercury, god of trade, which was found in 1947 by ploughing a field near the temple, was most likely a votive donation. It is finely executed and it reflects classical patterns of beauty. While bronze statues which are dated Ist century are believed to have been imported from Gaul or Italy (e.g. that of an archer which was found in London in 1842), this statue could have been made locally, because it makes sense to assume that, some decades after the Roman conquest, advanced metal workshops were established in Britain, which had a tradition in this field (see the Snettisham Hoard and the Waterloo Helmet in the introductory page), to fulfil the request for luxury goods. 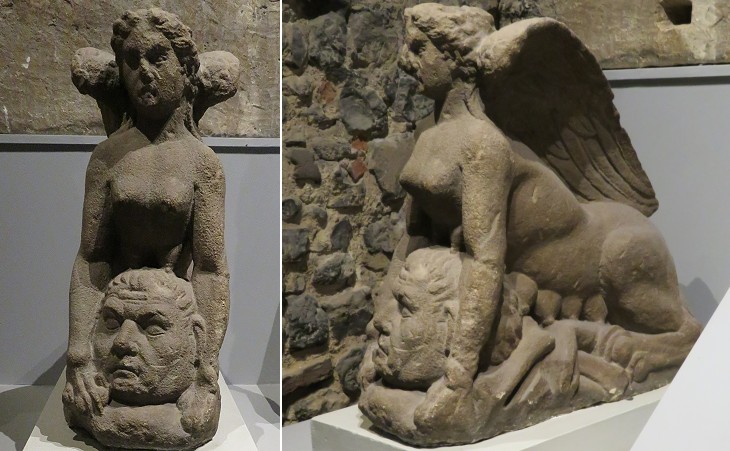 Colchester Museum: Sphinx (late Ist century AD); it was found in 1821 in a cemetery outside Balkerne Gate and presumably it was part of the decoration of a large funerary monument

The stone of this statue is local, thus the sphinx was not imported from some other provinces of the Empire. The position of the wings brings to mind the statue of Minerva Victrix at Ostia. At the time of the discovery some doubted it was a genuine ancient statue and suspected it was a forgery based on the Capri Altar (it opens in another window), which was donated to the British Museum in 1775 and which today is regarded as a skilful assemblage of ancient fragments and modern reliefs. The discovery in 1928 of a tombstone which was decorated with a sphinx at Colchester supports the authenticity of the statue. A very similar funerary monument can be seen at Orange in Southern France.

Colchester Museum: Colchester Vase, a funerary urn, which was found in a cemetery outside the town in 1848

The vase is dated ca 175 and it is decorated with scenes of gladiatorial combats and fights with beasts. It is a "must see" of the Museum, the finest example of a group of colour-coated vases with relief decoration depicting scenes of hunting or fighting. Some slight inconsistencies in the inscriptions suggest they were added at a later time. You may wish to see some reliefs showing gladiatorial combats in the museums of Trieste and Burdur. The sites of some ten amphitheatres have been identified in Britain, e.g. at Caerleon (Isca Augusta), but not at Colchester. 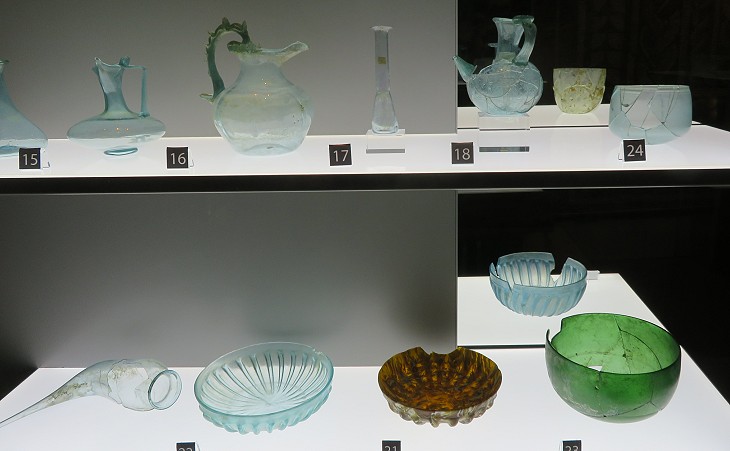 Glassmaking was introduced to Gaul and Germany by craftsmen of the Roman legions. It eventually developed into a main industrial activity in Germany where Cologne became an important glass manufacturing site; its products were sold in Britain to the local upper classes and to the Roman officers. Navigation along the Rhine facilitated trade between Germany and Britain; its development was accompanied by that of piratical activities by Saxon and Frankish tribes.

The political, military and economic decline of the Roman Empire was accompanied by a concentration of wealth in an elite of rich landowners and courtiers. The production of very expensive goods increased and in some instances new materials, e.g. ivory, were utilized. Some of the most precious items were perhaps gifts by emperors or claimants to the throne to captivate the support of influential citizens. 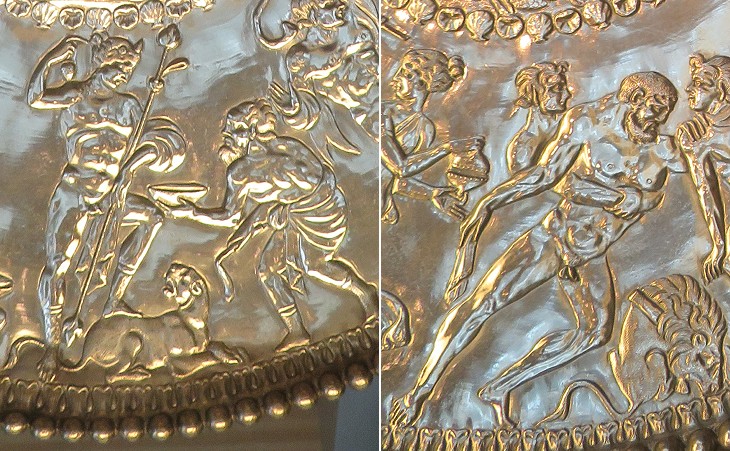 British Museum: Mildenhall Treasure: detail of the main dish showing: (left) Dionysus/Bacchus with a thyrsus (a long staff), his panther and Silenus, his tutor and companion; (right) a drunken Hercules (see this subject in a mosaic at Vienne) and the Nemean Lion

Pagan feelings had lost most of their appeal when the Mildenhall Treasure was made, but its decoration continued to depict traditional scenes which per se were a tribute to the "good old days of the fathers" when the Empire was at its apex. These luxury objects were meant for use within a small circle of trusted friends. 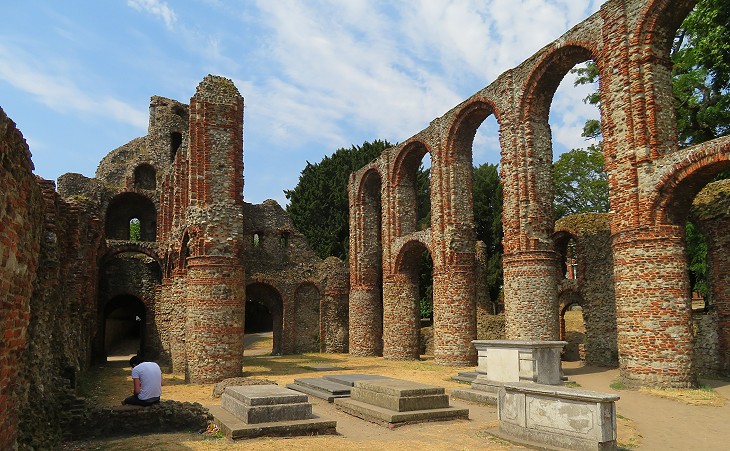 St. Botolph's Priory was founded in the early XIIth century on the site of a Saxon church. It soon became one of the most important Augustinian institutions in England. Its church survived the dissolution of the Priory in 1536, but not the Siege of Colchester. Its remains show that it was built by making use of fired bricks taken from Roman buildings. Its Norman Romanesque design and its ruinous state give the feeling of watching a monument of Camulodunum, similar to what occurs at St. Augustine's Abbey at Canterbury. 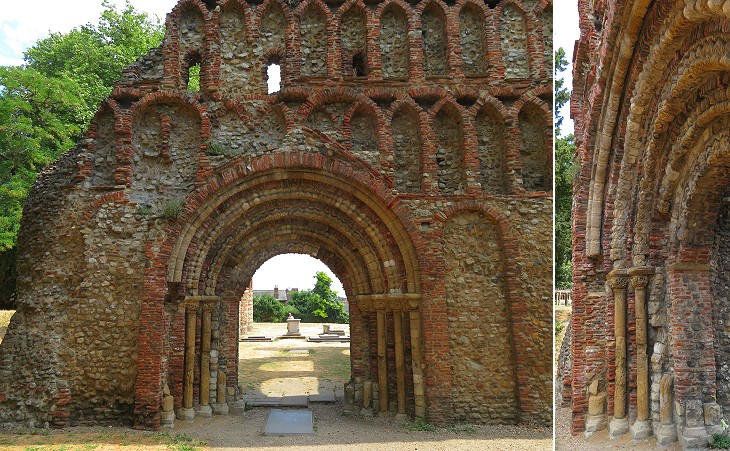 The image used as background for this page shows a silver medallion at the museum.