In 1722 Vienna became an archdiocese, a recognition by the Catholic Church of its importance and a decision welcomed by Emperor Charles VI who, more than others, regarded Vienna as a new Rome, the capital of an empire which encompassed many different nationalities. His thinking was also the result of a series of events which had largely increased the possessions of the (Austrian) Habsburgs. Charles VI became emperor in 1711; two years later, at the end of the Spanish Succession War, he had to give up his rights to the crown of Spain in favour of Philip of Bourbon: in return however he obtained the Lower Netherlands (Belgium), Milan, Naples and Sardinia (a few years later exchanged for Sicily): in 1699 the Peace of Carlowitz had defined the new border with the Ottoman Empire; the Habsburgs had gained most of today's Hungary and parts of today's Croatia and Romania (Transylvania). In 1718 the Peace of Passarowitz led to further temporary expansion into Serbia (Belgrade) and Romania (Oltenia).
The empire of Charles VI became the major European power and Trieste a very important port, notwithstanding the lack of colonies. This was reflected by the churches which were built or were redecorated in Vienna and in particular by Karlskirche, a new grand church outside the walls. 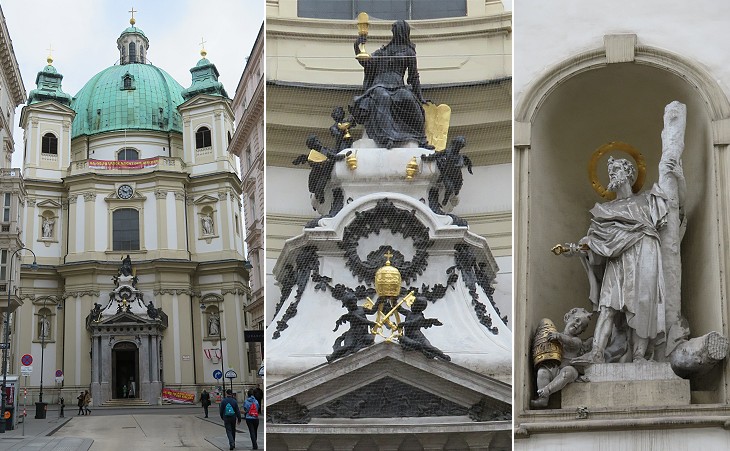 Peterskirche: (left) façade; (center) statue of Religion above the entrance; (right) statue of St. Peter on the back of the church

The church was erected in 1702-1733 on a previous medieval religious; the initial design by Gabriele Montani (a military engineer) was completed by Johann Lukas von Hildebrandt, another miltary engineer who eventually became one of the major architects of XVIIIth century Vienna (see his Kinsky and Belvedere palaces). The church is located at the end of a short street off Graben, a large square where the citizens of Vienna promenaded; its design is clearly influenced by its view from there, with the two bell towers closing on the dome "to stay" in the picture. The layout of the interior of the church is not based on a Latin cross, but is elliptical, similar to S. Agnese in Agone in Rome, in order to increase the visibility of the dome. 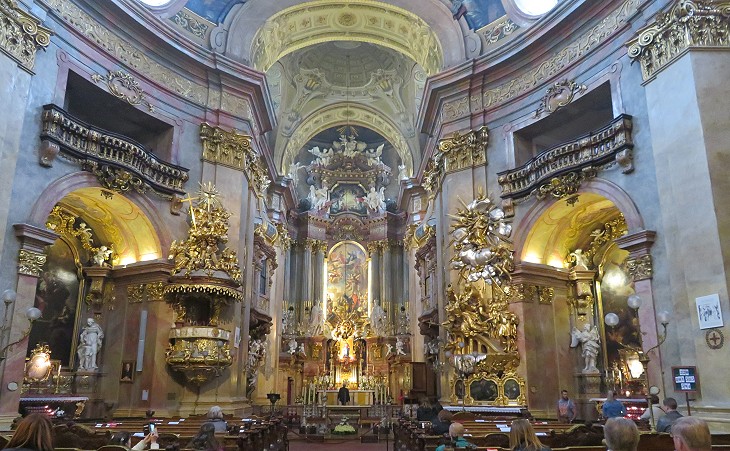 The decoration of the interior is due to different artists, but overall it conveys the feeling of being in a theatre where the scenery was created by the same hand. As a matter of fact it was partly designed by Antonio Galli di Bibbiena, son of Ferdinando who acquired great fame as scenographer at the court of Charles VI. Cardinal Sigismund Kollonitz, first Archbishop of Vienna donated some relics from the Roman catacombs to the church; he also strongly promoted the worship of St. John Nepomuk; the representation of the saint's martyrdom at Peterskirche is shown in another page. Interiors of Annakirche (left) and Franziskanerkirche (right); a detail of Annakirche can be seen in the image used as background for this page

Annakirche was in origin a church of the Poor Clares, but it was subsequently acquired by the Jesuits. In 1716 it was redecorated by Christian Tausch, who is known to have worked with Andrea Pozzo when the latter was in Vienna. The design of the altar is similar to the Altar of St. Ignatius at il Gesù in Rome.
The Franciscans were not in favour of a too lavish/coloured decoration and for this reason in 1707 Andrea Pozzo designed for them a main altar which has a more classic design. 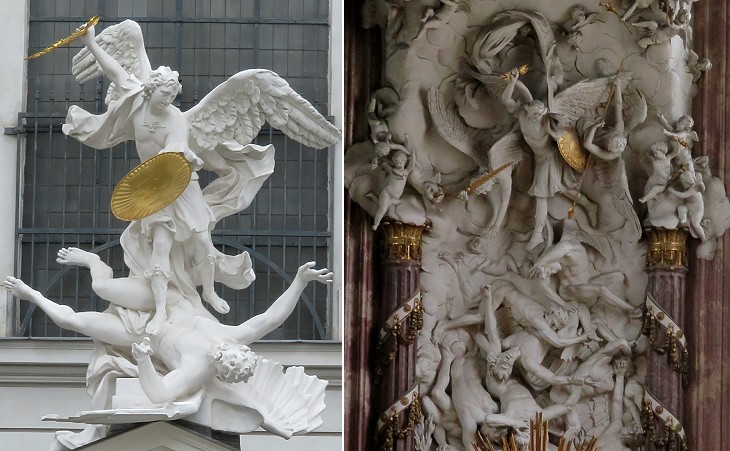 Michaelkirche: (left) statues above the portal (see a celebrated painting by Guido Reni depicting the same subject); (right) relief of the main altar

The church is situated near the entrance to Hofburg, the Imperial Palace and it used to be the parish church of the court. It was founded in the XIIIth century and modified many times. It contains XVIIIth century references to St. Michael which hint at the continuous efforts by the Habsburgs to eradicate Protestantism from Vienna and more in general from their dominions.
The majority of the churches which were built in the XVIIIth century were erected outside the city walls and they are shown in another page.