'Tis uncertain at what time Vienna was founded, we know however, that the Romans had a fortress here, or very near the place where the city now stands, called "Vindomina" or "Vindobona" and the many Roman antiquities found in this neighbourhood induce people to think that Vienna stands upon the same spot of ground.
Thomas Nugent - The Grand Tour - 1749 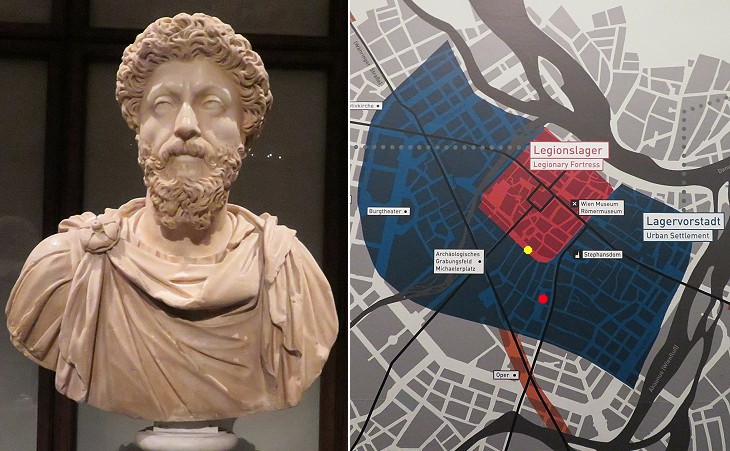 For a long time the historical relevance of the Roman past of Vienna was chiefly due to the town being regarded as the place where Emperor Marcus Aurelius died in 180 AD, because of a passage in Epitome De Caesaribus, a booklet on the lives of the emperors which was written at the end of the IVth century. A lengthy description of the agony and death of Marcus Aurelius in Scriptores Historiae Augustae, a collection of biographies of the late IIIrd century, did not mention the place of the event. All authors however indicated that the Emperor died of a pestilence while leading a campaign against the Marcomanni with the aim of establishing a permanent Roman presence north of the Danube. This makes Vindobona, at the time a strong Roman legionary fortress on the right bank of the river, the likely location of his headquarters. 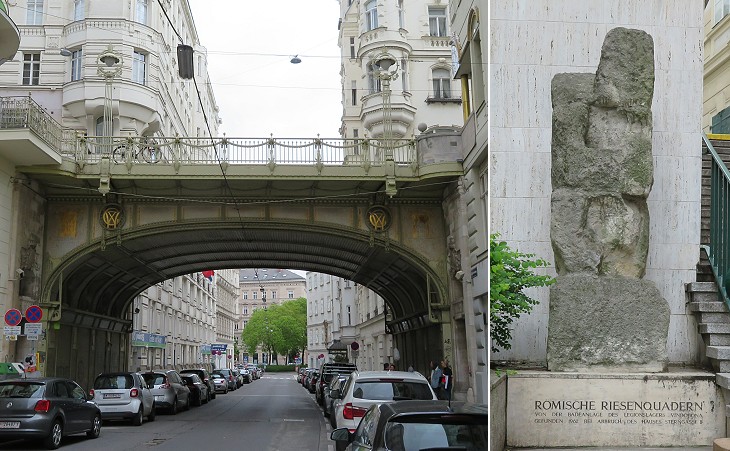 (left) Hohe Brucke (High Bridge) on the site of the western Roman ditch; (right) Riesenquadern (large stones) of Roman baths which were found in 1962 in Sterngasse

In ca 10 AD, the Romans moved some troops from the great legionary town of Carnuntum to an oppidum, a small fortified settlement, to the north of the XVIth century walls of Vienna; towards the end of the Ist century a fortress was built in the site of medieval Vienna; tombstone inscriptions indicate the names of the legions which were stationed there; at the beginning of the IInd century the fortress was rebuilt with stone and it was protected by a ditch which is still remembered by Graben (Ditch), the name of a wide street having an east-west direction. 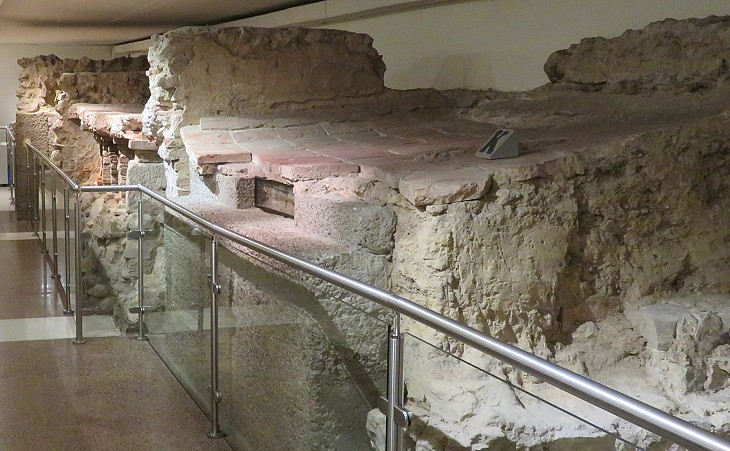 During the conflict with the Marcomanni Vindobona was sacked and Marcus Aurelius promoted its reconstruction. The fortress was strengthened during the IIIrd century and it was provided with better facilities for the legionaries. In 1948 chance excavations at Hoher Markt, in the very heart of the medieval city, led to the discovery of parts of Roman houses with heating systems. In 2008 Romermuseum was opened in their vicinity; it allows easy access to the ruins and it houses a number of reliefs, inscriptions and other Roman materials related to Vindobona, which were previously displayed at the Kunsthistorisches Museum. 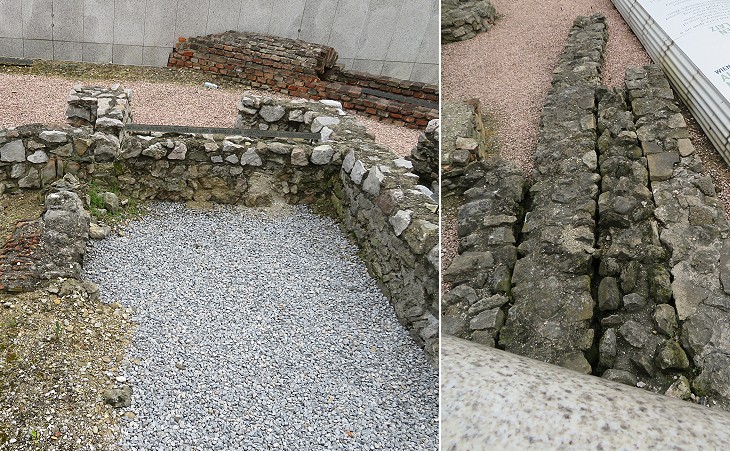 Remains of Roman civilian buildings at the Archaeological Area at Michaelerplatz

A civilian settlement developed outside the legionary fortress. It housed families of the soldiers, shops, taverns, workshops and other economic activities linked to the military. These settlements were known as cabanae (huts), because initially they had a temporary purpose and very simple buildings. The fortress plus the civilian settlement occupied almost completely the area which eventually became the medieval town. Michaelerplatz is located at the main entrance to Hofburg, the imperial quarter. In 1989-1991 evidence of Roman and medieval buildings was identified and part of it was not covered again. Some archaeologists and many tour guides, in order to make the view of the remains more interesting, claim they included a brothel for soldiers (it does not occur only in Vienna). 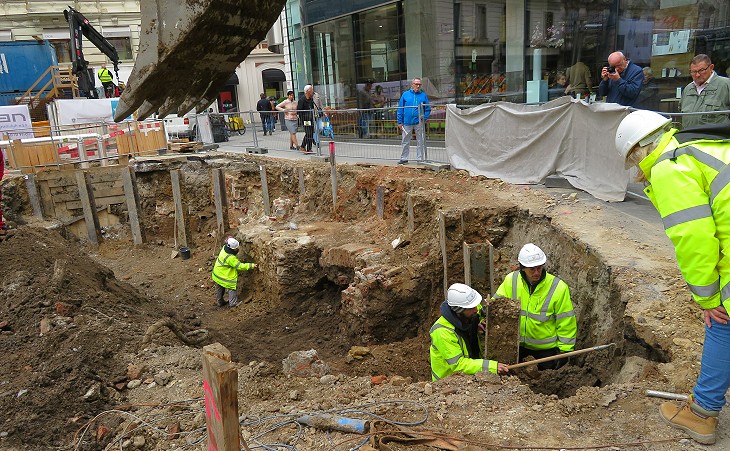 In 1975 tombs and other evidence of the cabanae settlement were found in the southern part of Neuer Markt, a large square east of Michaelerplatz. In 2019 a fine large fountain in the northern part of the square was dismantled to allow excavations for a new underground parking lot; archaeologists were involved in assessing the presence of other antiquities. Similar to what occurs at Augsburg, several remains of the Roman town lie beneath later buildings, e.g. those of a brick-clad drain of the fortress in the cellar rooms of the Fire Brigade Building opposite Mariensaule. 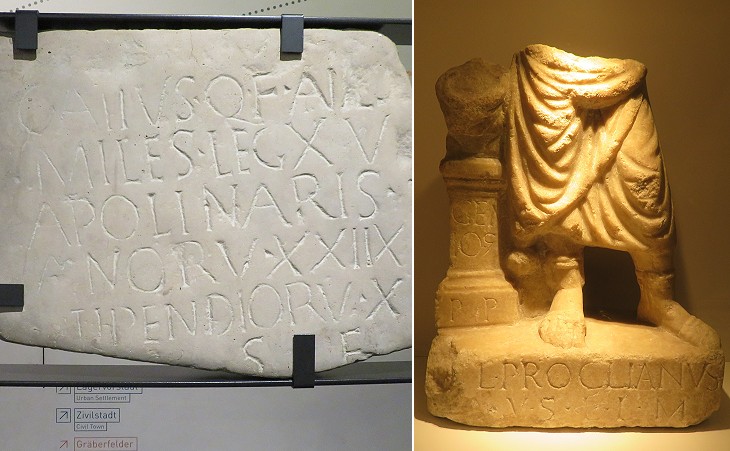 Romermuseum: (left) tombstone of Gaius Atius of Legio XV Apollinaris; he died at 28 after 10 years of service; (right) votive altar to the Genius, the protecting deity, of a cohort, the basic military unit of a legion which was commanded by a centurion; the altar was erected by the "Primus Pilus", the most senior centurion

Legio XV Apollinaris played an important role in the conquest of the territories south of the Danube during the campaigns led by Drusus Nero and his brother Tiberius in the late Ist century BC. Tombstones of soldiers of the legion have been found at Carnuntum, Scarbantia and other towns of Pannonia, the name given by the Romans to the territory east of Noricum which included the western half of today's Hungary. Vindobona was located at the north-western end of the province and some historians included it in Noricum. 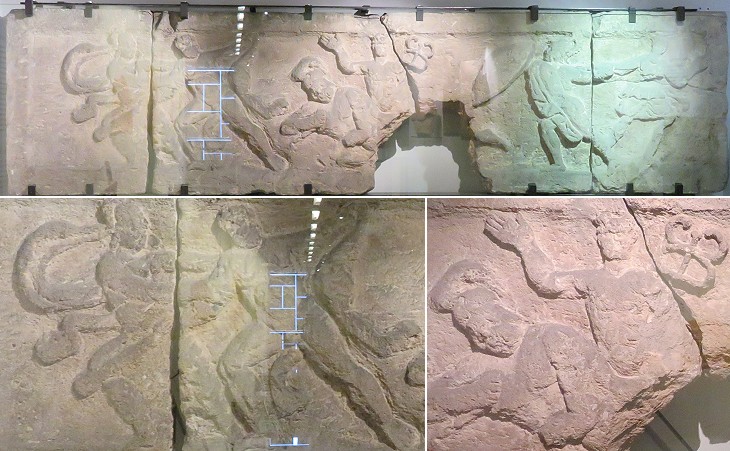 Romermuseum: (above) Cycnus or Cygnus (Swan) Relief; (below) details showing the head of a swan, Cycnus and Hercules (left) and Mercury acting as Jupiter (right)

In 1890 some coffins were found outside the walls, south of Belvedere Palace; their lids were made of reliefs which were most likely taken from a public building of the Roman town; they depict a minor episode of the deeds of Hercules, i.e. his fight with Cycnus, son of Mars, a cruel giant who killed his guests. The god wanted to avenge the death of his son, but Jupiter intervened to restrain him. In the relief the role of Jupiter is taken over by Mercury, whom Gauls and Germans often associated with their ancestral deities.
The likely decorative purpose of the relief and its depicting Mercury, god of trade, is a sign of the prosperity enjoyed by Vindobona, at least during the periods of peaceful relations with the tribes beyond the Danube.
The image used as background for this page shows a tombstone relief of a wagon at the Romermuseum, an example of the many reliefs depicting aspects of civilian life in the provinces along the Danube/Rhine border. 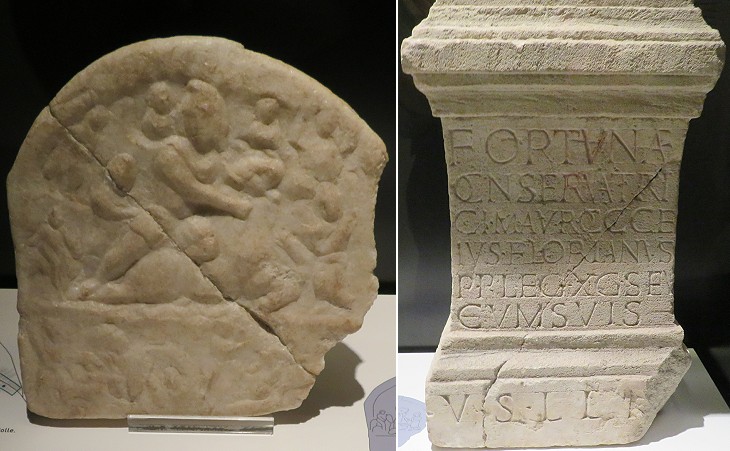 The legionaries of the garrison of Vindobona came from all parts of the Roman Empire and they worshipped gods who often were not those sitting on Mount Olympus. Mithraism had its roots in the eastern provinces of the Empire, Fortuna (Luck/Fate) was an ancestral Roman goddess to whom a great sanctuary was erected at Praeneste, but she was also often worshipped in the intimacy of the house. Conservatrix means a woman who keeps safe, a sort of guardian angel. 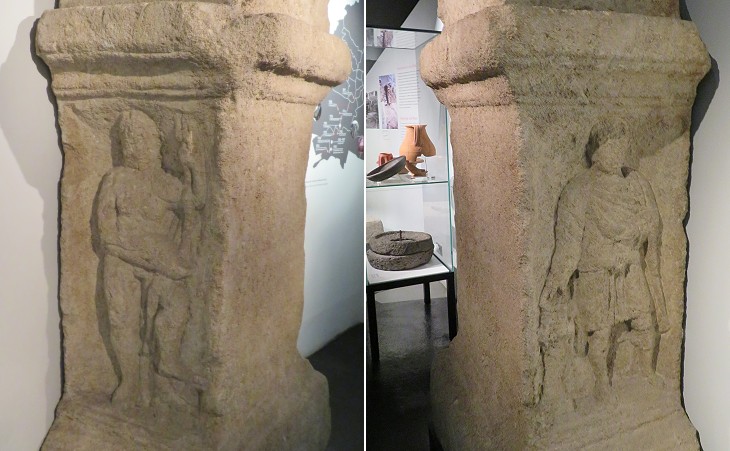 Romermuseum: altar celebrating some works on the banks of the River Danube: (left) Neptune; (right) a Roman officer performing a sacrifice

A worn out inscription indicates that the altar was erected in 279 by officers of Legio X Gemina. The works might have been required by the operations of Classis Histrica (Ister being one of the Latin names of the Danube), a military fleet which patrolled the northern/left bank of the river to detect signs of preparations for raids into Roman territory, similar to what occurred on the River Rhine. The headquarters of the fleet was usually situated at Aquincum (Budapest), but it might have been temporarily moved to Vindobona.
At the end of the IVth century the town was sacked by the Marcomanni and in 433 it was occupied by the Huns of Attila; in 568 the region was invaded by the Avars, a nomadic people from Central Asia who had a particularly destructive effect on the European countries they conquered. Today's Austria was conquered by Charlemagne in the late VIIIth century.