Piazza Navona
(Vasi at work in the Grand View of Rome) 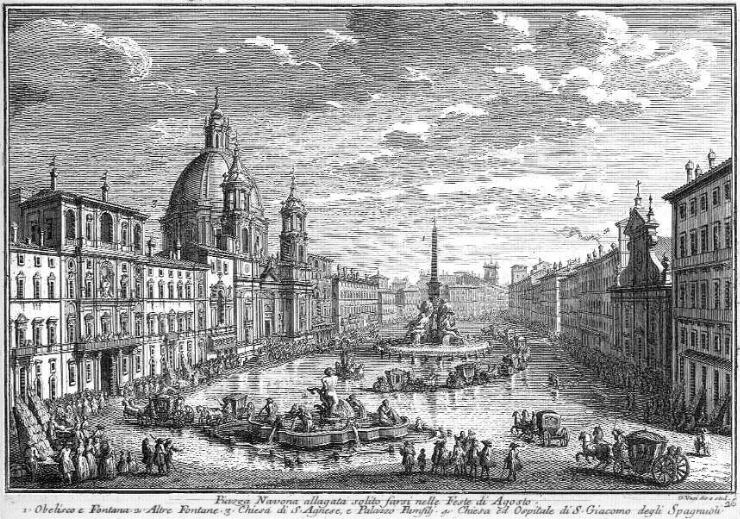 The name of the square (Navona=large ship) is probably due to its shape, which derives from that of the stadium built by Emperor Domitian upon which it stands. In this 1752 etching Giuseppe Vasi showed Piazza Navona during Ferragosto (August 15, a public holiday) when it was flooded to provide a refreshing view to the Romans; perhaps it was a memory of the time when the stadium was used for naumachia, re-enactments of naval fights.
The view is taken from the southern side (green dot in the map below). In the description below the plate Vasi made reference to: 1) Obelisco e Fontana (dei Quattro Fiumi); 2) Other Fountains, i.e. 2a - Fontana del Moro and 2b - Fontana del Nettuno; 3) Chiesa di S. Agnese e Palazzo Pamphilj; 4) Chiesa ed Ospitale di S. Giacomo degli Spagnoli. The small 1748 map shows also 5) Palazzo Lancellotti; 6) Palazzetto del Vignola. 3a) is S. Agnese and 3b) is Palazzo Pamphilj. 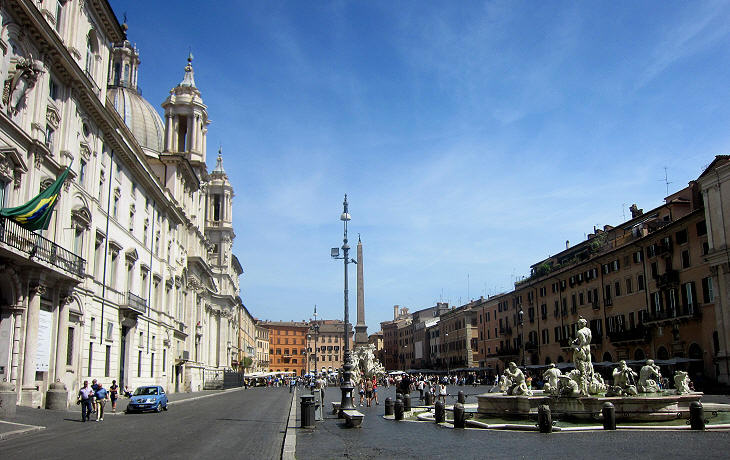 Piazza Navona is still very much as it was designed in the XVIIth century. In 1936 three houses on the northern side of the square were pulled down with the idea of enlarging the access to the square, but eventually they were carefully rebuilt because it was found that they stood upon the walls of the ancient stadium.
Piazza Navona housed the main vegetable and fruit market of Rome. In 1869 the market was relocated to Campo de' Fiori. A traditional fair takes place in Piazza Navona during Christmas holidays. 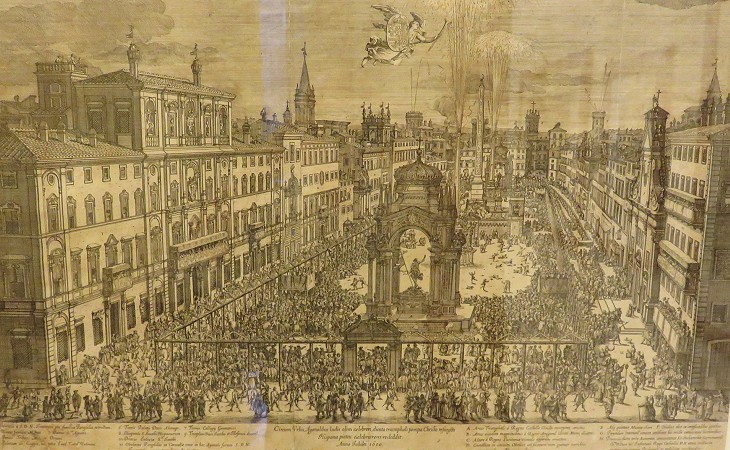 Museo di Roma a Palazzo Braschi: Dominique Barrière: Piazza Navona on Easter Sunday 1650 with ephemeral arches designed by Carlo Rainaldi. The new façade of S. Agnese in Agone was yet to be built

I stept into Piazza Navona, called so by corruption, from Piazza d'Agona because in this Piazza was anciently a Circus for Sports, and it was called Circus Agonalis. In the midst of it anciently stood a great Egyptian Pillar, with hieroglyphics upon it; and now of late it hath gotten another such Pillar set up here by Pope Innocent the X, with a rare Fountain issuing forth at the Foot of it, and adorned with four great Statues of white Marble, representing the four Parts of the World. In this place also stands the new Church of St. Agnes, built upon the place where she was condemned to the Stews. This Church is built at the Cost of Principe Pamphilio, whose Pallace joins upon it. This Pallace overlooking the Piazza Navona, deserves not only a glance of an Eye, but also an hours Inspection within.
Richard Lassels' The Voyage of Italy, or a Compleat Journey through Italy in ca 1668 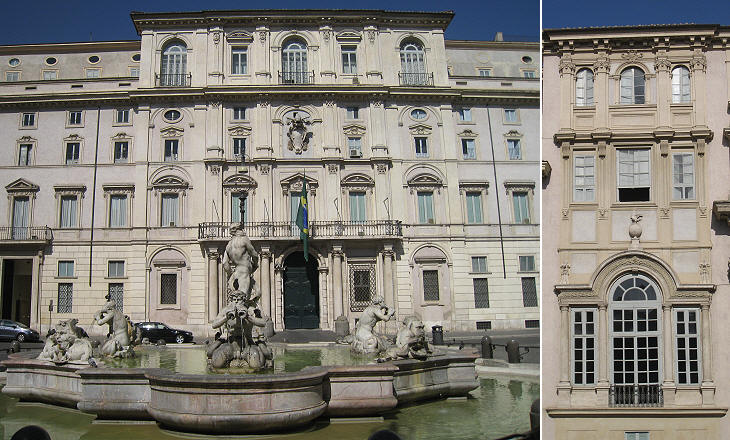 (left) Palazzo Pamphilj (which today houses the Brazilian Embassy to the Republic of Italy); (right) the addition designed by Francesco Borromini

The palace was built in 1650 by Girolamo Rainaldi. Olimpia Maidalchini, sister-in-law of Pope Innocent X lived here; her name split and translated in Latin "olim pia" (once pious) became a common joke to speak of an easy going woman. She convinced the Pope to name her Princess of S. Martino, a town she totally redesigned. The Pamphilj acquired by marriage another palace near Collegio Romano which also is named after them. In 2000 the building was repainted with the light blue colour it had in the XVIIIth century. You may wish to see a page on the new colours of many Roman monuments and busts of Olimpia Maidalchini by Alessandro Algardi and of Innocent X by Gian Lorenzo Bernini. 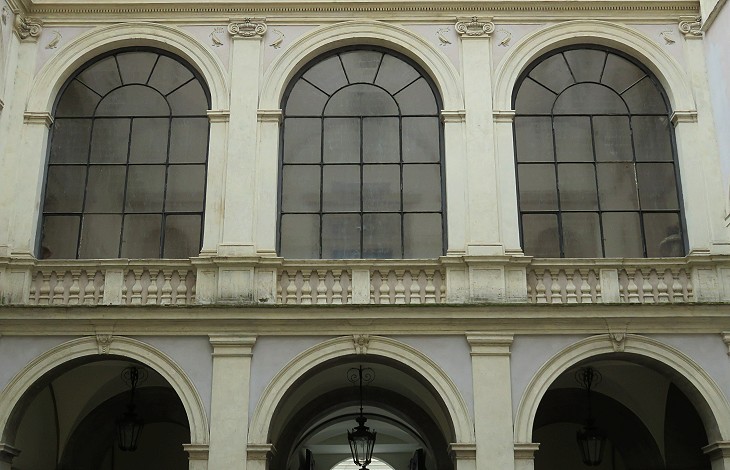 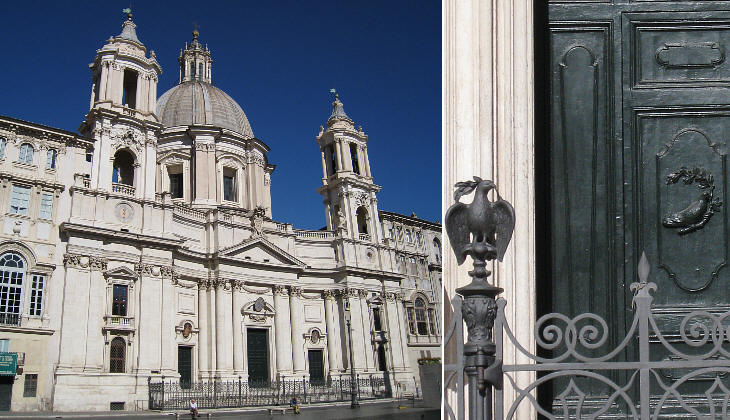 (left) Façade; (right) doves, the heraldic symbol of the Pamphilj

A church dedicated to St. Agnes, a IVth century martyr, was built in the XIIth century on a previous oratory (you may wish to see the church dedicated to her on the site of her burial); the church was oriented in a different way and its entrance was situated in Via dell'Anima opposite Tor Millina. Agone (contest) is a reference to the races which took place in the ancient stadium.
The initial project for S. Agnese was designed by Girolamo Rainaldi helped by his son Carlo. Work started in 1652, but one year later Francesco Borromini replaced Rainaldi and modified almost entirely the design of the façade, which was expanded to include parts of the Pamphilj palace, thus gaining space to erect the two bell towers. Borromini designed also the elliptical dome on a high drum. Eventually Prince Camillo Pamphilj, son of Olimpia Maidalchini, reinstated Carlo Rainaldi.
Notwithstanding these changes of architects the new church shows consistency of style. It represents the baroque solution to the design of bell towers in conjunction with a large dome. 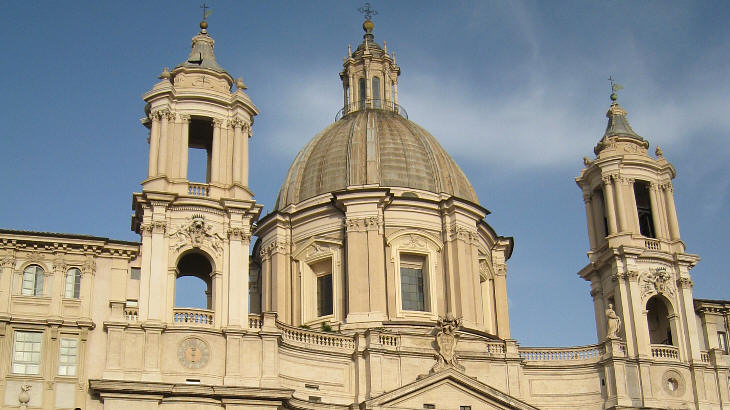 The dome and the bell towers

Each of the bell towers has a clock: this occurs also at S. Pietro and SS. Trinità dei Monti. The clocks indicated different hours: the Italian one and the European one (Tempo Ultramontano - beyond the Alps).
In order to adapt myself to one of the important customs of this country, I have invented a method which makes it easier for me to learn their system of counting the hours (a detailed description follows). When you learn about this for the first time and start to figure it out, it seems extremely complicated and difficult to put into practice. But one soon gets used to it, and even finds the calculation as entertaining as the local inhabitants, who delight in this constant counting and recounting, like children who enjoy difficulties which are easy to master.
W. J. Goethe - Italian Hours - September 17, 1786 - translation by W. H. Auden and E. Mayer - Collins 1962 (for a short explanation of the Italian Hour see the old clock of Sutri). 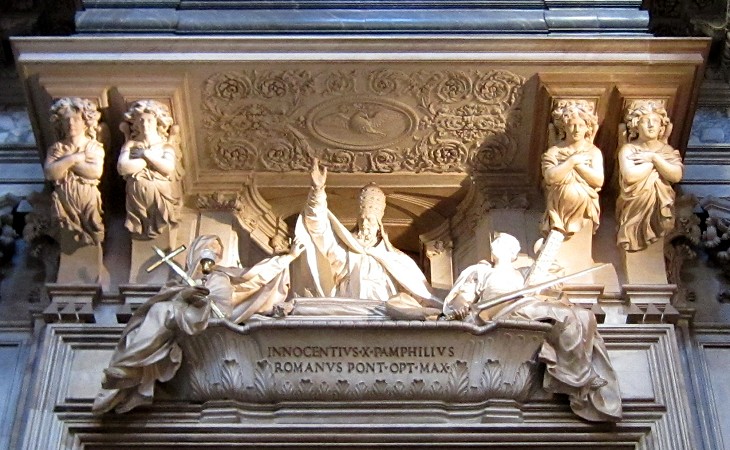 Pope Urban VIII, the predecessor of Pope Innocent X, made careful plans for his funerary monument which was designed by Gian Lorenzo Bernini. Pope Innocent X wanted to be buried at S. Agnese in Agone and Francesco Borromini envisaged his monument to be placed in one of the chapels, but because of delays in the completion of the church the monument never materialized. Eventually more than seventy years after the Pope's death, his body was laid to rest in a monument which is very awkward to notice. 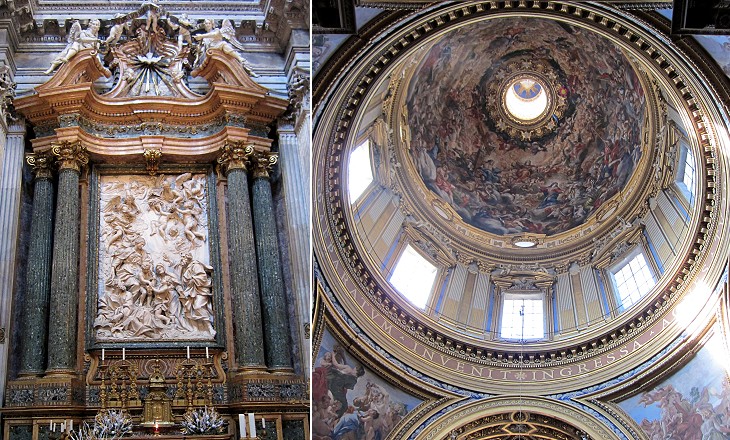 A particular feature of the decoration of S. Agnese in Agone is the use of marble reliefs, rather than paintings as altarpieces. You may wish to see a page on this topic which shows some altarpieces of this church. 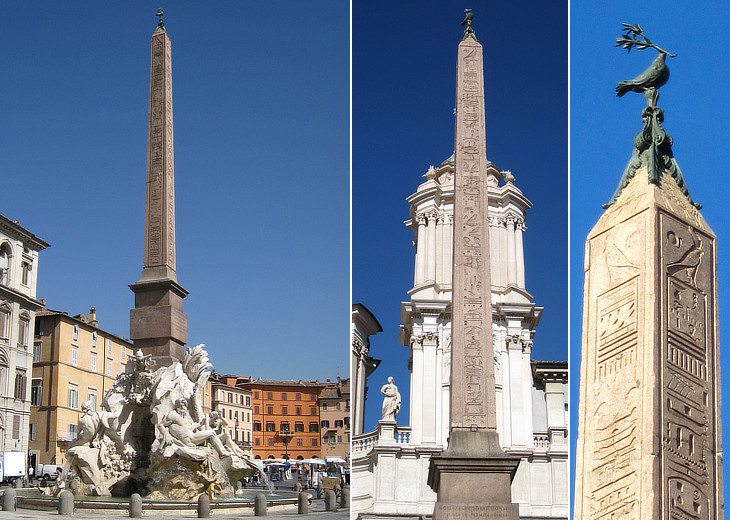 In the Summer this Square is overflowed with Water about two Foot deep, more or less as they please, through which the Coaches drive (for here is the Ring). The Noise of the Splashing of the Horses Feet in the Water, with that of the prodigious quantity which gushing from this vast Rock, and in some parts tumbling down a great height, and breaking on other parts of the Fountain, so as to sling a sort of Dew all about; together with the Echoes from the Palaces, and Churches all round the Piazza, is indeed Sublime.
Jonathan and Jonathan Richardson - Account of Some of the Statues, etc. in Italy - 1722
During the pontificate of Pope Gregory XIII three fountains were built in Piazza Navona to serve the needs of the fruit and vegetable market. Pope Innocent X decided to embellish the fountain at the centre of the square for the Jubilee Year 1650. Bernini was not invited to submit a project, as the Pope reproached him with being too closely associated with his predecessor Pope Urban VIII and with his failure in the construction of the bell towers of S. Pietro. Bernini found a way to have a model of his project shown to the Pope who immediately changed his mind and assigned the work to him.
The fountain he designed is regarded as his masterpiece also from an engineering point of view, because many thought that the pierced travertine rocks would have collapsed under the weight of the obelisk which was placed above them. The obelisk was brought here from Circo di Massenzio. It is a "Roman" obelisk in the sense that it celebrates Emperors Vespasian, Titus and Domitian and it was initially erected in this area before being moved by Maxentius to the circus built in honour of his son Romulus (you may wish to see all the obelisks of Rome in one page).
Dan Brown set an episode of his novel Angels and Demons at Piazza Navona; his hero says: The lone dove is the pagan symbol for the Angel of Peace. (..) The bird was looking west. Actually it is a Pamphilj dove and it looks east towards the rising sun. Read some more remarks on the accuracy of his book. See also the coats of arms of the Pope in the drawings by Filippo Juvarra and the fountain in the moonlight.

Bernini involved his assistants in the execution of the fountain: Ganges (by Claudio Francese identified as Claude Adam or as Claude Poussin - two French sculptors who worked in Rome - according to R. Wittkower), Nile (by Giacomo Antonio Fancelli), Danube (by Antonio Raggi), Rio de la Plata (by Francesco Baratta) represent the four parts of the world known at the time. The rivalry between Bernini and Borromini is usually mentioned to explain the raised hand of Rio de la Plata (which you can see in the image used as background for this page), as if the river was scared that the church built by Borromini could fall on him, but the fountain was designed and completed before Borromini started to design the church.
You may wish to see a Fountain of the Four Rivers in Vienna and a sarcophagus and a mosaic which show that the depiction of four rivers was part of the early Christian iconography, also outside Italy. 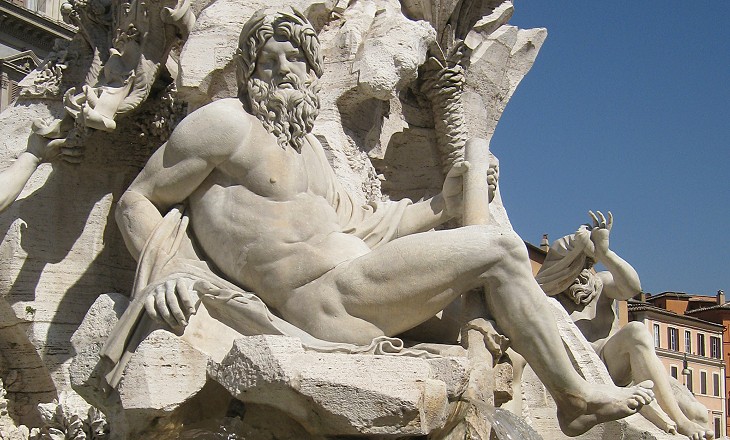 The statue of the River Ganges is the only one which is based on the ancient iconography of river gods and it resembles that of Marforio although Ganges is not as comfortably placed on the rock as Marforio. 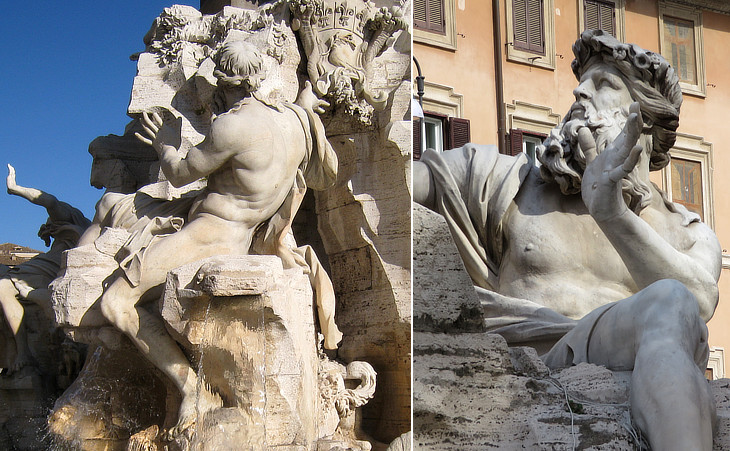 The purpose of the fountain was to show the Faith descending on the World from the obelisk and this explains why the Danube is turned towards it. 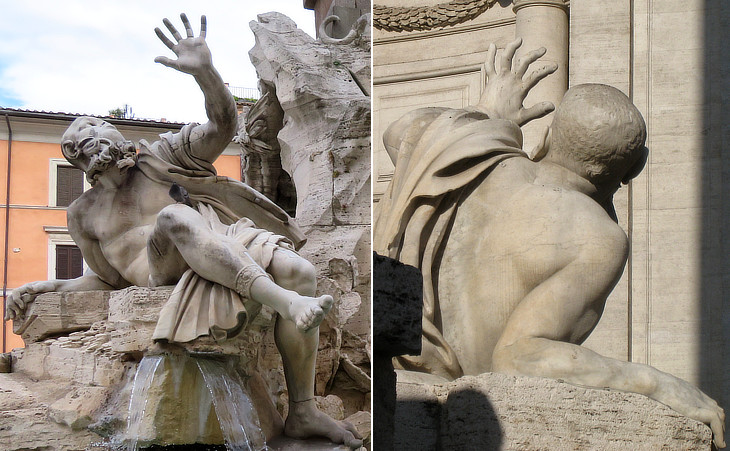 Rio de la Plata is awestruck by the New Faith which was unknown in its part of the world. Its gesture brings to mind a detail of Raphael's Transfiguration (it opens in another window) and a famous statue by Giambologna. 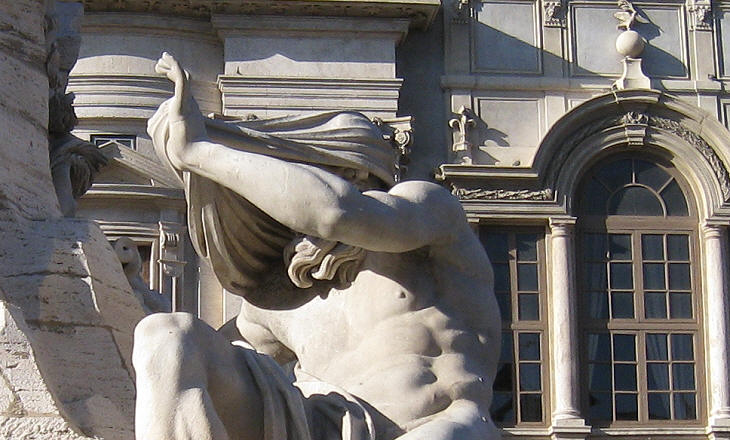 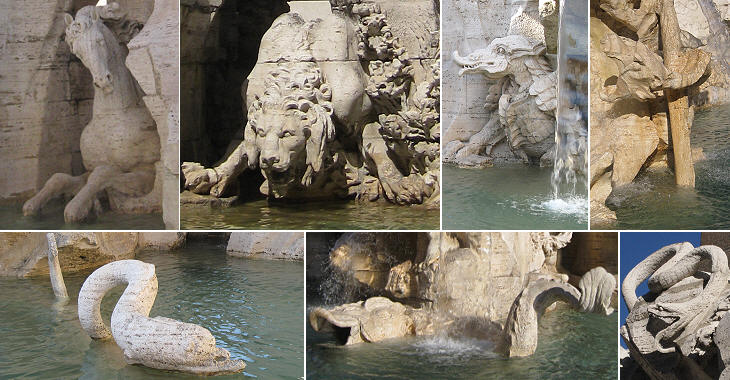 The reaction of the Romans to this new fountain was not that enthusiastic according to Pasquino: 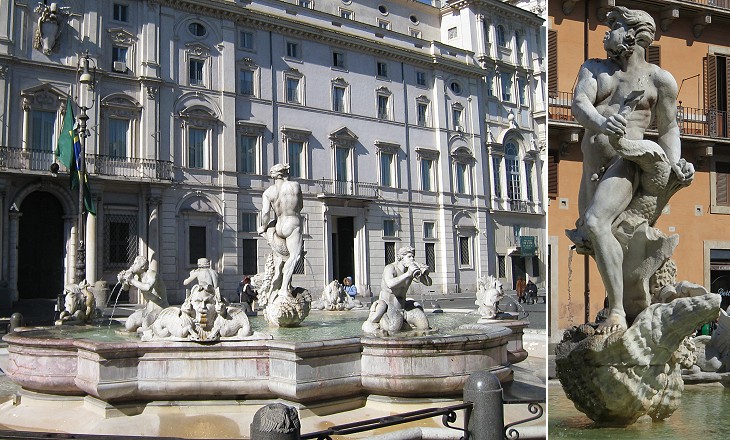 The fountain on the southern side was designed by Giacomo della Porta and it was decorated with tritons, masks, dolphins and dragons, the heraldic symbol of Pope Gregory XIII.
In 1653 Pope Innocent X asked Bernini to improve the appearance of the fountain. Bernini designed a naked man standing on a conch shell and holding a dolphin by its tail; it was designed in a way that it is interesting to watch it from all sides. The statue was actually sculptured by Antonio Mari, an assistant to Bernini. Because of its facial features, the statue was called il Moro (the Moor) and eventually the name was used to designate the whole fountain. 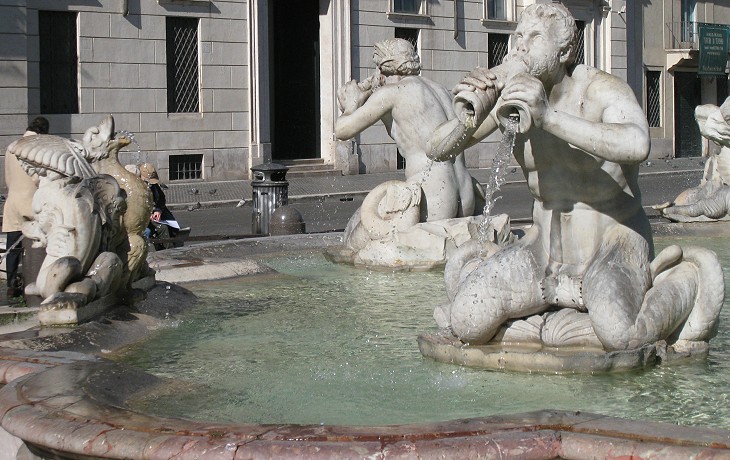 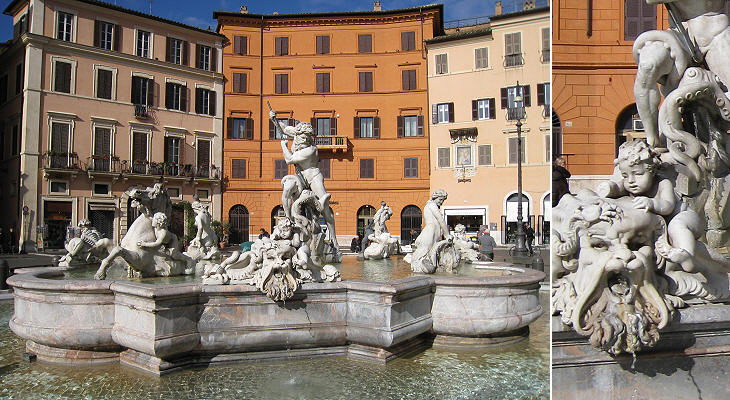 Fontana del Nettuno and a detail of its decoration

The decoration of the third fountain was not added until 1878 and for once it is an addition in line with the general context. The central statue is a work by Antonio Della Bitta, whereas the groups surrounding it are by Gregorio Zappala.