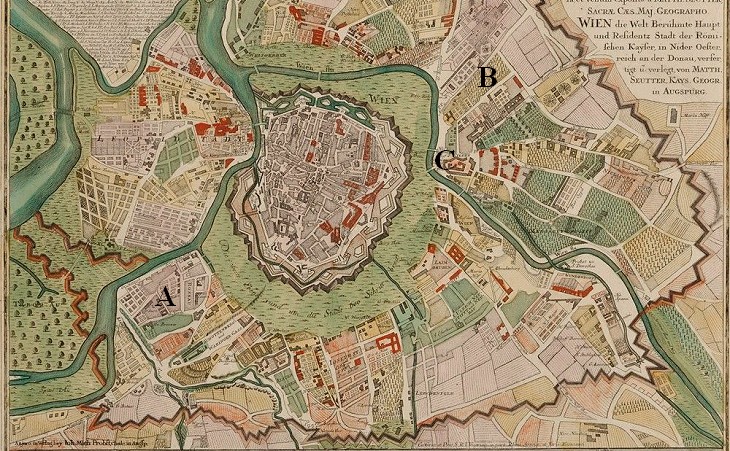 1730 Map of Vienna by Matthaeus Seutter: A) Alser neighbourhood with Servitenkirche, Alser Kirche and Schwarzspanierkirche; the neighbourhoods to its south (right in the map) housed Piaristenkirche, Ulrichskirche, Stiftskirche and Mariahilferkirche; B) Belvedere Palace with the adjoining churches of Salesianerinnenkirche and Garde Kirche; C) Karlskirche, the largest and finest church outside the walls

All around, except where in the encampment the magnificence of the invader was proudly flaunted in the face of the ruin that he had made, the prospect was desolated by war. Whatever might be the fortune of the coming day, a generation at least must elapse before those suburbs are rebuilt, those villages restored and repeopled, those fields fully cultivated again.
Henry Eliot Malden - Vienna 1683 - 1883
During the 1683 Siege of Vienna the churches of the suburbs of the town were either razed to the ground on purpose by the Ottomans, or were greatly damaged by the exchanges of artillery fire. After the victorious end of the siege they were slowly rebuilt or repaired and the neighbourhoods where they were located experienced a major demographic and economic development. Servitenkirche and the adjoining monastery of the Servite Order were damaged in 1683, but some key architectural features of the church and in particular its elliptical dome (the first one in Vienna) could be easily repaired after the war and it served as a model for Peterskirche and Karlskirche. 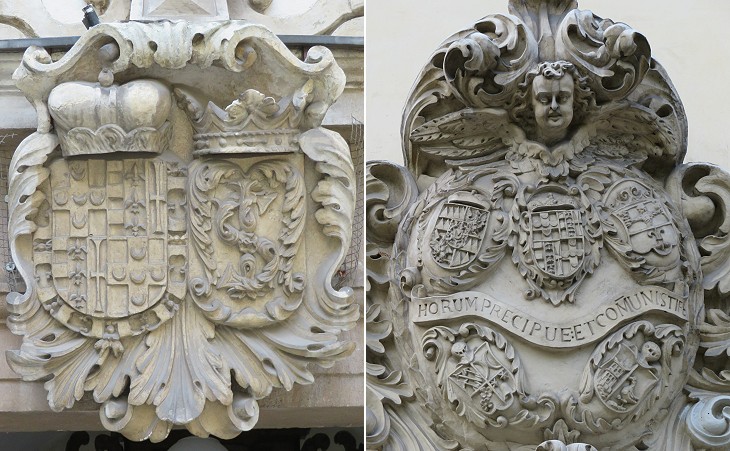 The original building was completed in 1677, but its erection was decided in 1639 when a donation was made to this purpose by Ottavio Piccolomini, a condottiere who fought for the Habsburgs of Spain and Austria during the Thirty Years' War (1618-1648). The war was a particularly bloody one because it was also a religious conflict which led to many (holy) massacres. Ottoboni's brother was Archbishop of Siena and the Servite Order had a major convent in that town. The Piccolomini family had two popes (Pius II in 1458-1464 and Pius III for 26 days in 1503) and four cardinals. 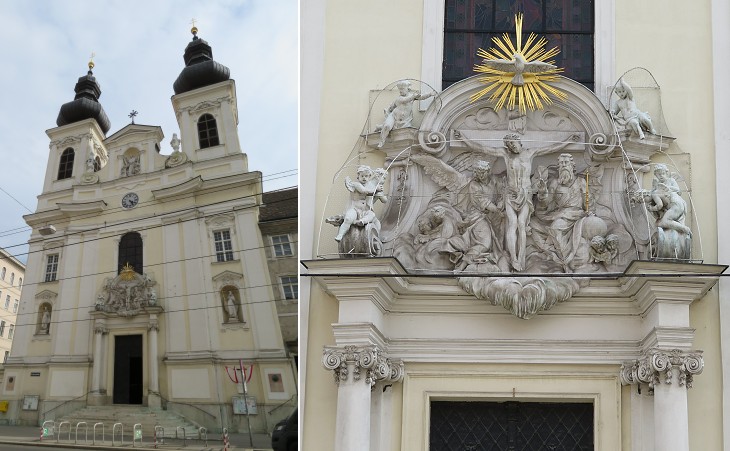 Alser Kirche (aka Dreifaltigkeitskirche - Holy Trinity): (left) façade; (right) portal with a complex 1727 decoration symbolizing the Holy Trinity, which served also as a "Station of the Cross" (see a statue of St. John Nepomuk next to the church)

During the Siege of Vienna and the following war the Ottomans captured some prisoners who were sold as slaves. In 1688 Emperor Leopold I invited the Spanish branch of the Trinitarian Order to establish themselves in Vienna, because the Order had the mission of ransoming Christian slaves. The church of their monastery was built in 1695-1698 and the ceremonies for its completion were attended by 16 ransomed Christian slaves. The monastery had also a hostel for Ottoman prisoners to be exchanged with Christian ones. In 1783 the Order was disbanded by Emperor Joseph II and the church became the parish of the Alser neighbourhood. 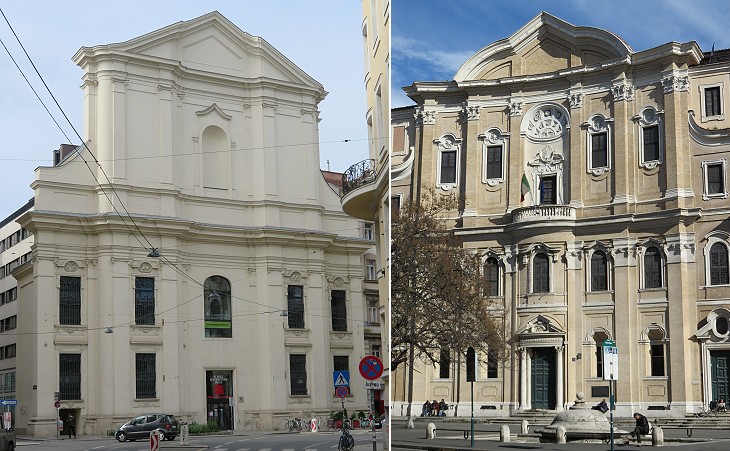 The church belonged to Spanish Benedictine monks who wore a black (schwarz) habit. It was destroyed in 1683, but it was rebuilt in a slightly different position in 1690-1739. In 1787 the building was acquired by the army and deconsecrated. In 1861 it returned to be used as a church, but for the Protestant soldiers of the garrison. In 1930-1938 it was given to the Russian Orthodox community. The church was demolished in 1964 with the exception of its façade which resembles Francesco Borromini's Oratorio dei Filippini. 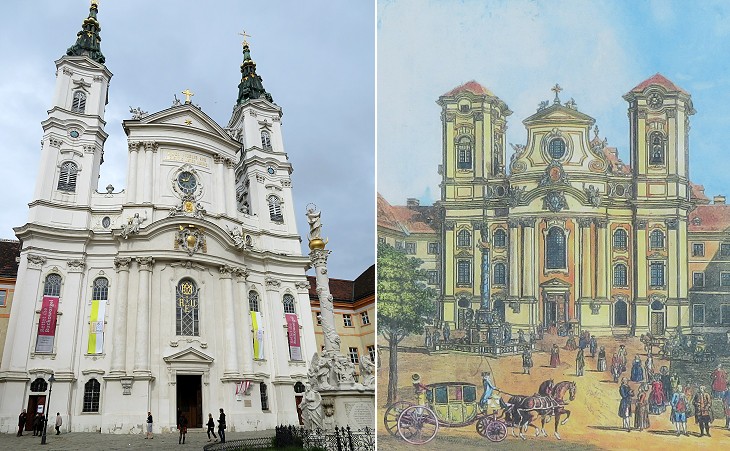 Piaristenkirche (aka Maria Treu Kirche) and its Mariensaule today (left) and in a 1780 engraving by Johann Ziegler (right): the coat of arms of Cardinal Sigismund Kollonitsch, the first Archbishop of Vienna, is shown in the image used as background for this page

The comparison with the 1780 print shows the addition of spires to the bell towers in 1858-1860; this applies to almost all the bell towers shown in this page; the spires usually have an onion-shaped base which is a characteristic of Austrian religious architecture. In 1697 Emperor Leopold I invited the Piarists (aka Scolopi) to establish themselves in Vienna and to open their schools for the poor. The construction of the church began in 1716; the façade partially lost its typically Baroque aspect when it was modified. 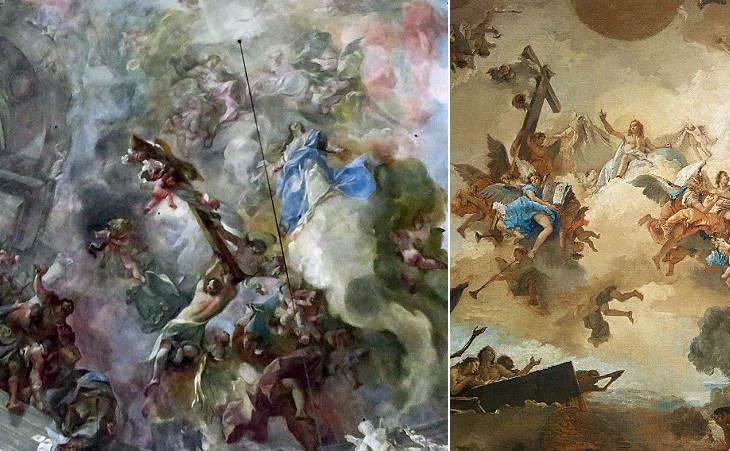 Franz Anton Maulbertsch (1724-1796) was an Austrian fresco painter known for his bold use of colour. (..) (He should be regarded as) one of the great painters of XVIIIth century Europe, a colourist worthy of comparison to the best of his contemporaries, including the celebrated Venetian artist Giovanni Battista Tiepolo.
From the Introduction to Thomas DaCosta Kaufmann - Painterly Enlightenment - 2005.
The ceiling of the dome is regarded as the masterpiece of Franz Anton Maulbertsch; it was his first important work and it shows the influence of Venetian painters in the use of colour; the dramatic depiction of the subjects calls to mind some details of il Baciccio's ceiling at il Gesù. 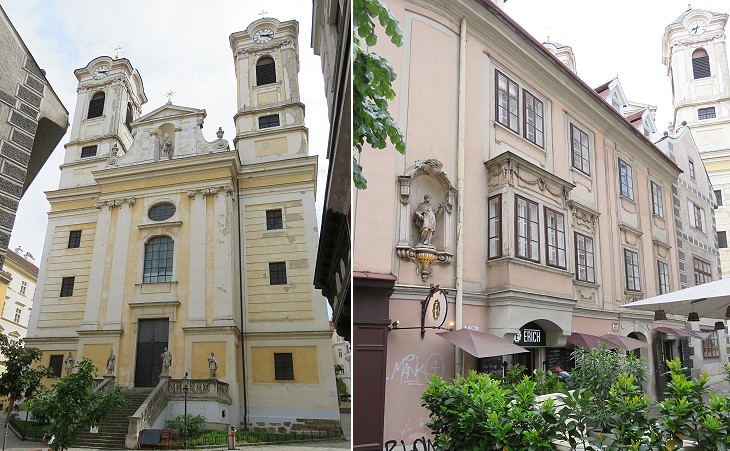 A chapel dedicated to St. Ulrich, a Xth century Bishop of Augsburg, was built on a hillock west of the walls as early as 1211. In the course of the centuries it was replaced by a church, which however was entirely destroyed during the Siege because Kara Mustafà Pacha, the Ottoman commander, placed there his cannon and a gunpowder magazine which eventually blew up. It was rebuilt in 1721-1724 and it has a Pestsaule behind its apse: it is surrounded by interesting houses of the early XVIIIth century when the area was developed at the initiative of Joseph I, emperor in 1705-1711, hence Josefstadt, the current name of the neighbourhood (see some other interesting houses near Ulrichskirche). 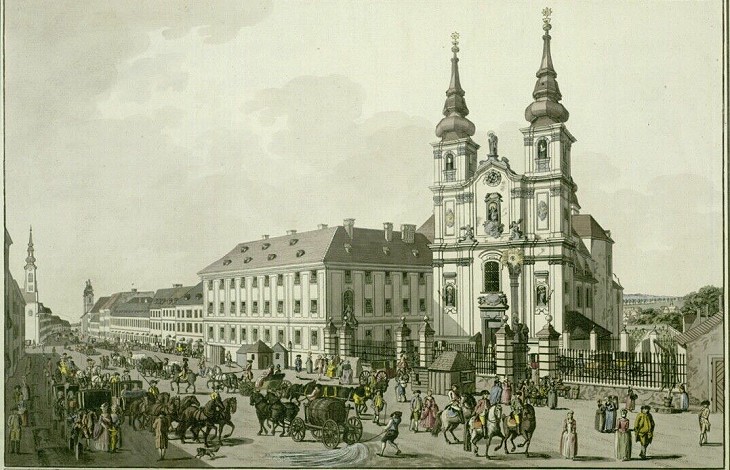 Empress Maria Theresa who ruled from 1740 to 1780 is remembered with affection in all the provinces of her vast empire. Her first years in charge were very difficult, because her accession to the throne was challenged because of her sex. After her rights were eventually recognized in 1748 she embarked on a vast plan of reforms. The first statistics, censuses and tax cadastres were introduced, enabling the state to gain an insight into the inner structures of the Empire, so that specific economic measures could be implemented; these measures proved effective and the Empire and Vienna experienced a period of development; in 1754 the first census of the population showed that Vienna had 175,000 inhabitants, many of whom lived outside the walls, in particular along a road which led to the Barnabite shrine of Mariahilf, south of the walls. 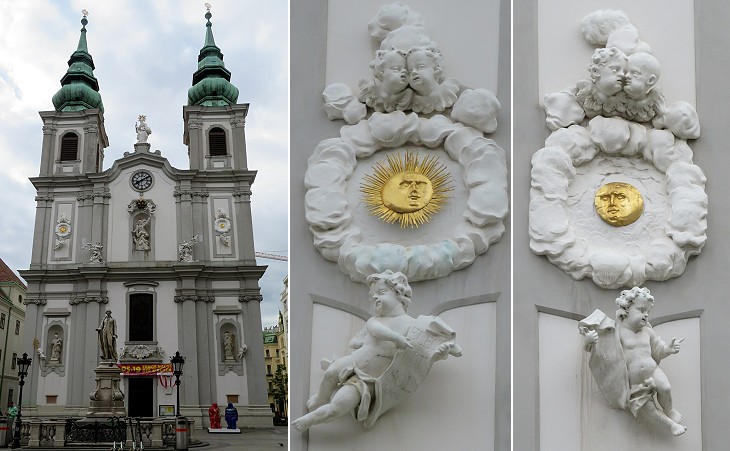 Mariahilferkirche: (left) façade; (right) the Sun and the Moon

Most of the suburban churches of Vienna were parish churches, but a few of them had a different origin: a common feature they share is the vertical thrust of their bell towers. Mariahilferkirche has a façade which follows Italian patterns with stucco decorations and niches with statues of saints. It was built in 1660 for a Barnabite monastery and to house a copy of a miraculous image of the Virgin Mary which was worshipped at Passau, at the time and independent town on the River Danube between Austria and Bavaria. The church was destroyed during the Siege and entirely rebuilt in 1711-1730. 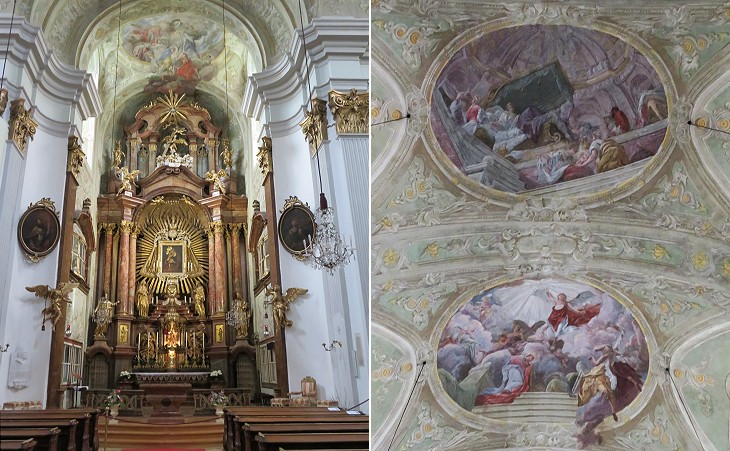 Mariahilferkirche: (left) main altar with the sacred image; (right) 1760 illusionistic ceiling by Johann Hauzinger and Franz Xaver Strattmann depicting the Birth of the Virgin Mary and the Annunciation

The decoration follows the pattern of the churches inside the walls, although in a more modest manner. In 1783 Mariahilferkirche became a parish church. 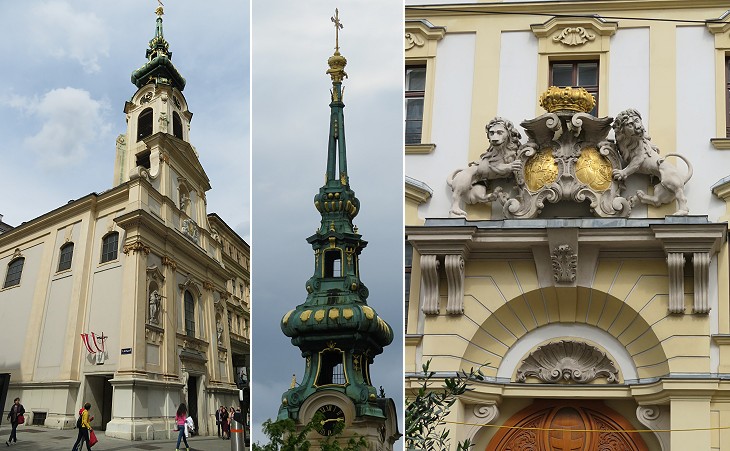 (left/centre) Stiftskirche (Church of the School); (right) portal of the Military Academy in Stiftgasse

Austria was involved in the three Succession Wars of 1701-1748; these wars led to the foundation of the first military academies to provide future officers for technically specialized corps, such as engineers and artillery, with scientific training. In ca 1735 the newly-founded School of Engineering of the Austrian Military Academy was housed in a large building along Mariahilferstrasse and it was provided with a church. The School was eventually relocated elsewhere and the building became a barraks. 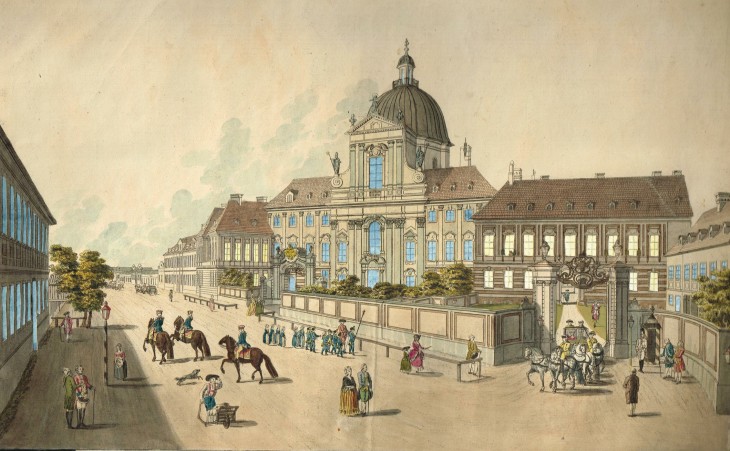 Salesianerinnenkirche in a 1780s engraving by Johann Ziegler

The church and the adjoining nunnery were built in 1716-1719 at the initiative of Empress Dowager Wilhelmine Amalia, widow of Emperor Joseph I. They were designed by Donato Felice d'Allio, who was born in Italy, went to work to Vienna as a mason and eventually became one of the leading architects of the first half of the XVIIIth century. Salesianerinnenkirche was one of his first works. The church and the nunnery have a similar design, a continuity which can be noticed also in Rome between S. Maria della Pace and the adjoining buildings. 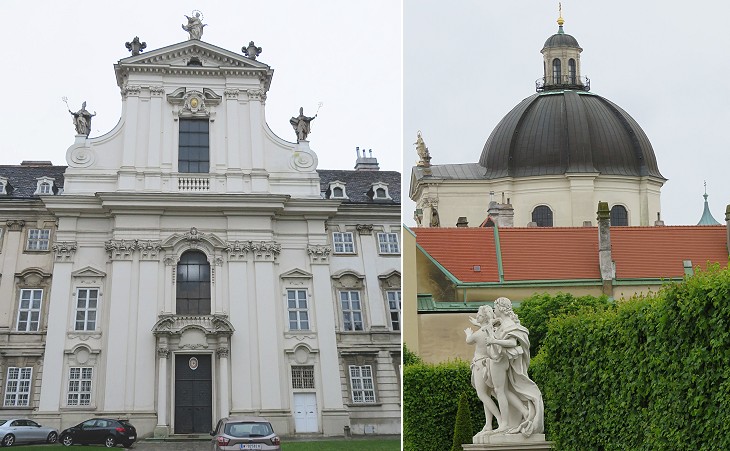 Salesianerinnenkirche: (left) façade with statues at its top, similar to what occurs in many Roman churches; (right) dome seen from the gardens of Belvedere Palace

The Italian aspect of the façade is very evident in this church which is not flanked by the tall bell towers with their added spires which characterize many of the other churches outside the walls. The dome of Salesianerinnenkirche can best be seen from the Belvedere gardens: it stands as a landmark in a fine 1760 painting by Bernardo Bellotto. 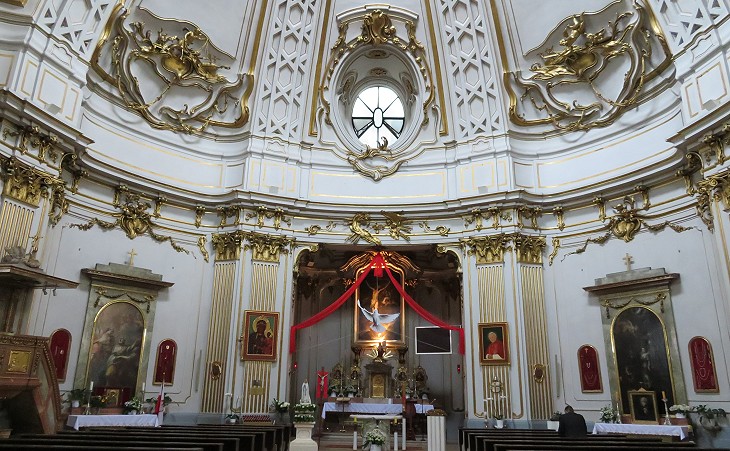 The church was initially built in 1755-1763 for a large hospital along the road leading to Belvedere Palace. In 1782 the hospital was relocated and its facilities were assigned to the Polish Guard of the Emperor. It has since been associated with the Polish community of Vienna. It was designed by Nikolaus Pacassi, court architect to Maria Theresa. Garde Kirche is one of the last Rococo churches of Vienna and its design calls to mind S. Bernardo alle Terme.