If you came to this page directly, you might wish to read a page with an introduction to this section or page one which covers the outer aspect of Palazzo Ducale first.

Luciano Laurana, whom Duke Federico da Montefeltro commissioned the enlargement of Palazzo Ducale, designed a large courtyard immediately after the entrance to give the Duke's guests the feeling they were inside the mansion of a Renaissance prince. A double Latin inscription around the courtyard celebrated the great deeds of Federico in war and in peace.
Laurana developed a pattern initially designed by Filippo Brunelleschi for Spedale degli Innocenti in Florence, but he had to sort out how to design the junctions of the four porticoes which he did with L-shaped pillars. You may wish to compare it with the courtyard of Palazzo della Cancelleria in Rome. 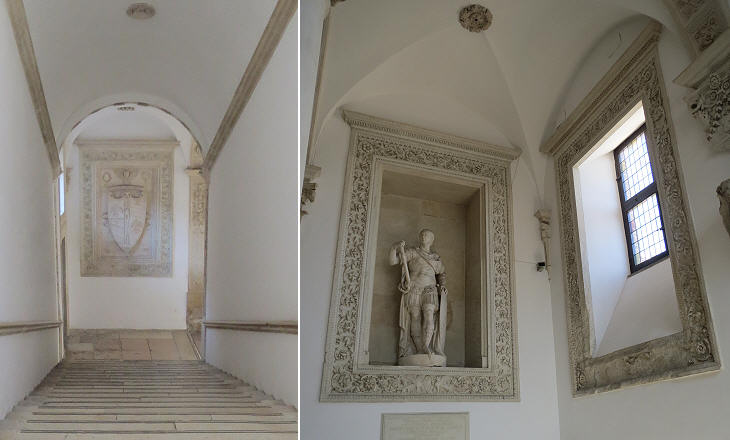 The ground floor housed the large library gathered by Federico. You may wish to see its decorated ceiling in the introductory page. Notwithstanding the spreading of printed books Federico collected manuscripts only, which were made by skilled court copyists. The books were all moved to Rome by Pope Alexander VII when he founded Biblioteca Alessandrina.
A grand staircase led visitors to the first floor where the Duke's apartment and the reception halls were situated. 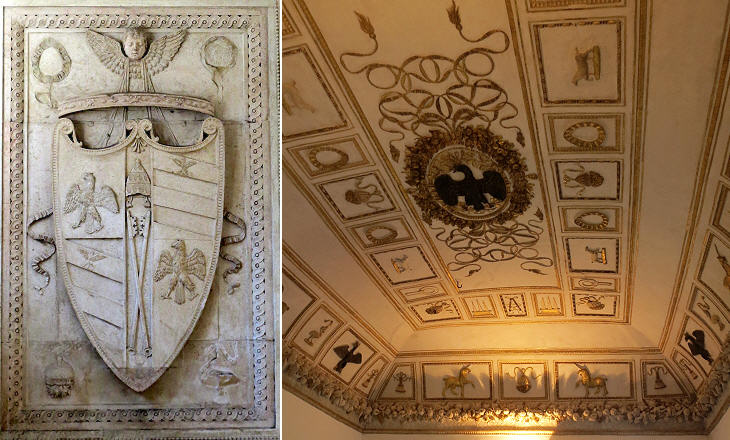 (left) Coat of arms of Duke Federico da Montefeltro; (right) ceiling of the Duke's apartment with his heraldic symbols

The legal bases for the Duke's possessions were quite complex. He was Count of Urbino because German Emperor Frederick II gave this title to his ancestors in 1226, but he was Duke of Urbino on the basis of a 1474 decree by Pope Sixtus IV, which confirmed previous appointments. Some of the towns which were part of the Duchy were given to him as Vicar of the Pope, others were fiefdoms of the Emperor. Eventually Federico decided to stress his role as Vicar of the Pope and in his coat of arms he inserted a tiny vertical band with the papal heraldic symbols. In the rest of the decoration of Palazzo Ducale these symbols do not appear.

Francesco di Giorgio Martini, the architect who took over from Luciano Laurana in 1472, completed the renovation of Palazzo Ducale. He was assisted by Ambrogio Barocci from Milan at the head of a group of talented stonecutters who decorated all the frames of doors and windows and a band which runs below the ceiling. In the XVIth century the della Rovere added the second floor, but its decoration was made consistent with that of the first floor. 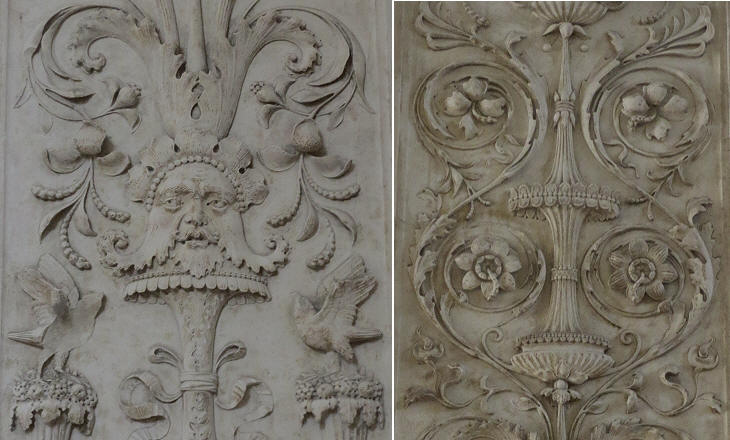 Grotesque chandelier-type decorations of the frames of doors and windows; the image used as background for this page shows another detail of the decoration

In 1480 some caves (It. grotte) were unearthed by chance on the Esquilino hill in Rome. They were not caves, but the halls of Domus Aurea, a residence built by Emperor Nero which had been covered with material excavated to make room for Foro di Traiano. Artists rushed to see them because their walls were entirely painted with ornamental patterns arranged as chandeliers. These patterns were immediately copied and the decoration of Palazzo Ducale is mainly based on them. 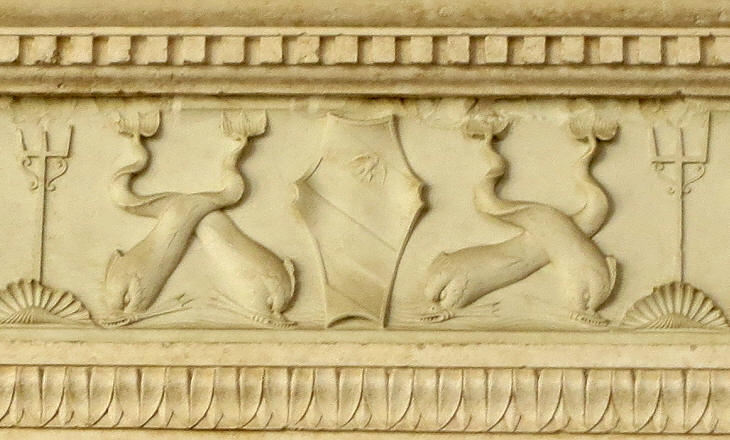 Decorative motif from a horizontal band

Chandeliers perfectly fit the vertical panels which decorated doors and windows. Motifs for the horizontal bands were also found studying the ancient monuments of Rome. That shown above is almost identical to a frieze of Basilica di Nettuno in Rome. 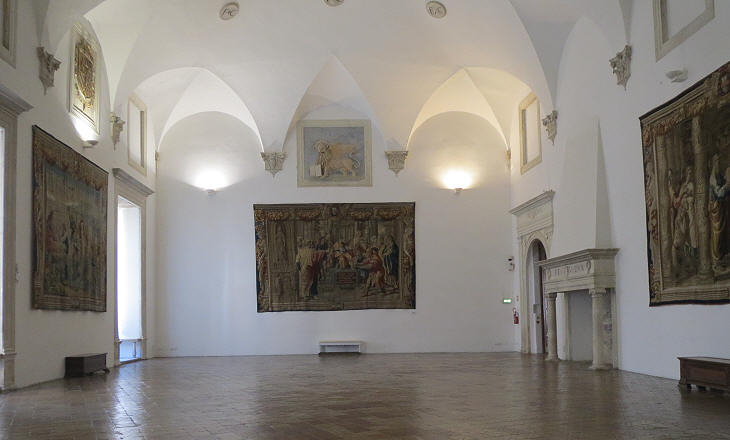 Hall of the Throne

Duke Federico could enjoy his palace only in winter because in the good season he was always on the battlefield to earn the money he needed to maintain his court. When he was in Urbino, he fulfilled his duties as a sovereign in a large hall, but when he had time for himself he retired to a studiolo, a small room decorated with wooden panels and portraits of great men. He had a similar studiolo in his palace in Gubbio. 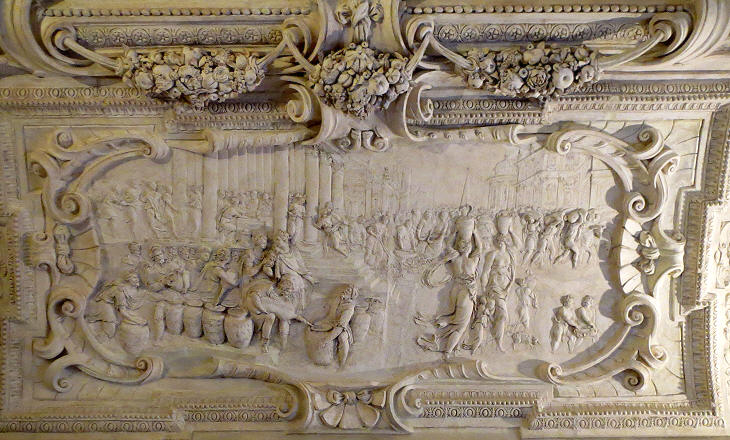 Today Palazzo Ducale houses an archaeological museum on the ground floor and Galleria Nazionale delle Marche in the two upper floors. The latter displays works by Piero della Francesco and Raphael. The great collection of paintings gathered by the della Rovere (who succeeded the da Montefeltro in 1508) in this and other residences was bequeathed to Vittoria della Rovere, the last of the family, who married Ferdinando II, Grand Duke of Tuscany and today it is on display at the Uffizi Gallery and at Galleria Palatina in Florence.

A mantelpiece by Domenico Rosselli

Domenico Rosselli was one of the sculptors who worked at the decoration of the doors and horizontal bands of Palazzo Ducale. In particular he decorated some mantelpieces with reliefs portraying amorini, naked baby angels. The technique he used is known as stiacciato (flattened), a very low relief which gains from being painted. Perhaps Rosselli had in mind the angels playing music by Agostino di Duccio in Tempio Malatestiano in Rimini. Mantelpiece with three poles, the heraldic symbol of Duke Guidobaldo II della Rovere, and a Greek inscription meaning "He who loves virtue". Conical poles (Lat. "Metae") were placed at turning points in ancient racing courses. In Italian the word became a synonym for goal, so the meaning of the heraldic symbol is that only he who loves virtue can achieve his goals of glory

The della Rovere were not as fond of living in Urbino as their predecessors and they rather preferred to stay in their palaces in Pesaro or Gubbio. The additions/modifications they made to Palazzo Ducale were consistent with the style of the rest of the building, although some slight differences can be observed between the decoration of Appartamento Roveresco, the second floor built by Duke Guidobaldo II, and that of the rest of the palace.

Return to page one: the da Montefeltro or move to page three: the della Rovere or page four: XVIIIth century monuments.