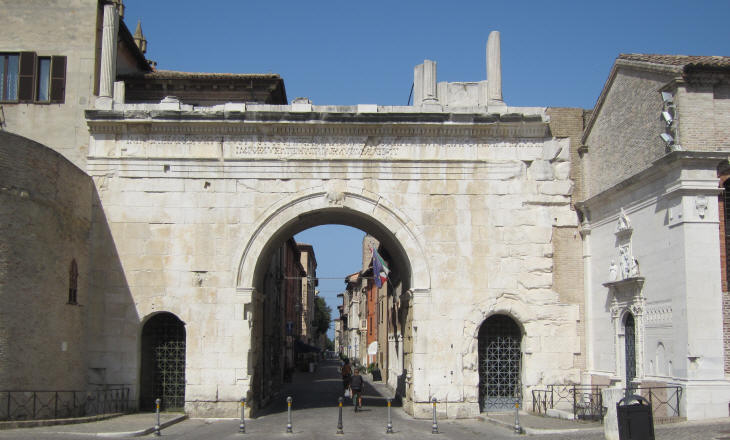 Arco di Augusto at the Via Flaminia entrance to the town

Fanum is a Latin word which indicates a holy site or a small shrine. Cicero used it for temples dedicated to deities not belonging to the traditional Greco-Roman world. Fano, which is situated on the Adriatic Sea, was named after Fanum Fortunae, a legendary shrine to Fortuna, the goddess of good or bad luck. Perhaps it was built after a Roman victory over Hasdrubal, Hannibal's brother, in 207 BC, which occurred near the town.
Fanum became a prosperous town when Emperor Augustus gave it the status of colonia, which meant that many of its inhabitants were Roman citizens. In 2 AD an arch dedicated to Augustus was erected at the entrance into town of a short road which branched off Via Flaminia. The latter linked Rome to Ariminum, today's Rimini, where an arch to Augustus had been erected in 27 BC. 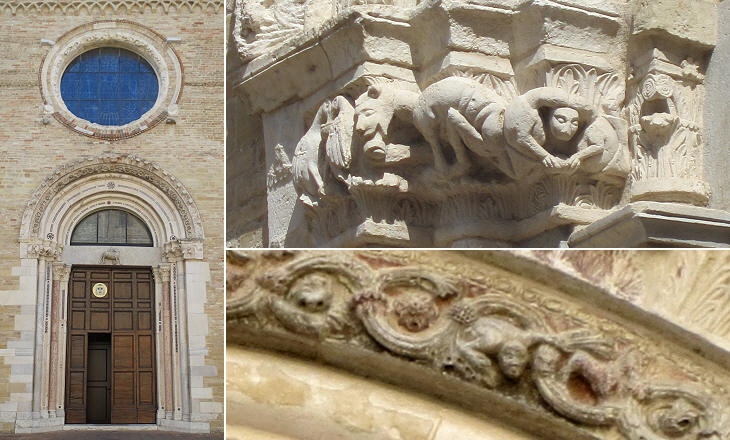 Fanum was destroyed during the Greek-Gothic War of the VIth century AD, but it was soon rebuilt. In 999 German Emperor Otto III donated it to Pope Sylvester II. Notwithstanding its being a possession of the Roman Church, in the XIIth century Fano became a Comune, an independent city-state which made an alliance with Venice. Fano did not have a proper harbour, but rudimentary wharfs projecting from the beach into the sea facilitated the landing of travellers and goods.
According to tradition the diocese of Fano was established in the IVth century. Its Cathedral was rebuilt in the XIIth century on the site of a previous one. It was largely modified in the following centuries, but it retains a XIIIth century portal. Perhaps parts of a previous one were utilized, because the capitals of its left side and a section of the arch are decorated with imaginary animals having some human aspects, whereas the rest of the portal is not. 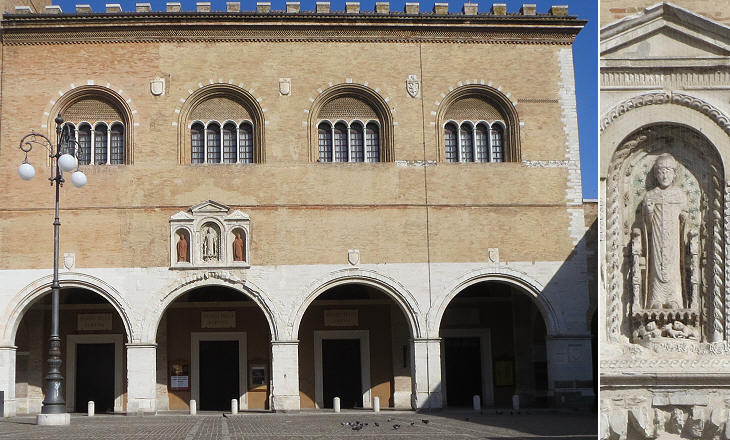 In 1299 the citizens of Fano started the construction of a large building which would serve as the residence of the podestà, a foreigner who was given authority to rule the town for a short period of time. This occurred when the citizens were not able to agree on whom of them should do this.
Dante (Inferno - Canto XXVIII) mentions an episode which is not documented historically, but indicates how the Malatesta, a family from Rimini, managed to acquire control over Fano. Malatestino Malatesta il Guercio (one-eyed) invited two influential noblemen from Fano to a meeting at Cattolica (halfway between the two towns) and sent a ship to pick them up. Then according to Dante (who describes the event as if it were to happen): Cast over from their vessel shall they be./ And drowned near unto the Cattolica/ by the betrayal of a tyrant fell./ Between the isles of Cyprus and Majorca/ Neptune ne'er yet beheld so great a crime/ Neither of pirates nor Argolic people. (translation by H. W. Longfellow). 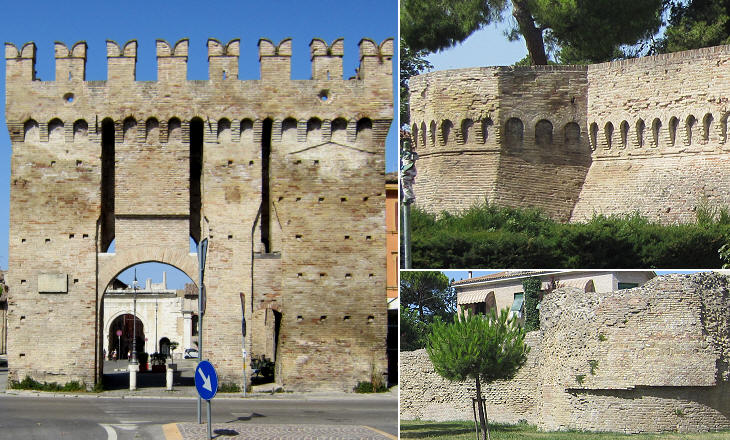 The Malatesta ruled over Fano until 1463 and although they were represented by Dante as ruthless and cruel people, the population of the town grew to the point that in the early XVth century new walls were built to the west of the Roman ones (Addizione Malatestiana). 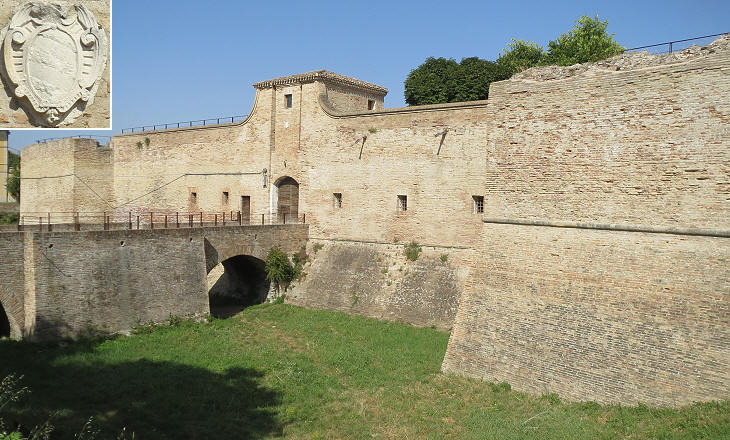 The beach which served as a harbour was protected by some fortifications which in 1438-1452 were replaced by a fortress designed by Matteo Nuti, a local architect who also worked for the Malatesta in Cesena. The fortress, similar to Rocca Costanza in Pesaro, was closer to the sea than it is today and its moat was filled with sea water. A levered bridge gave access to the interior. It had a high tower on its north-eastern corner which was destroyed in 1944. It was called la Vedetta (the Watchtower) because it allowed early detection of ships to which it provided a reference point. 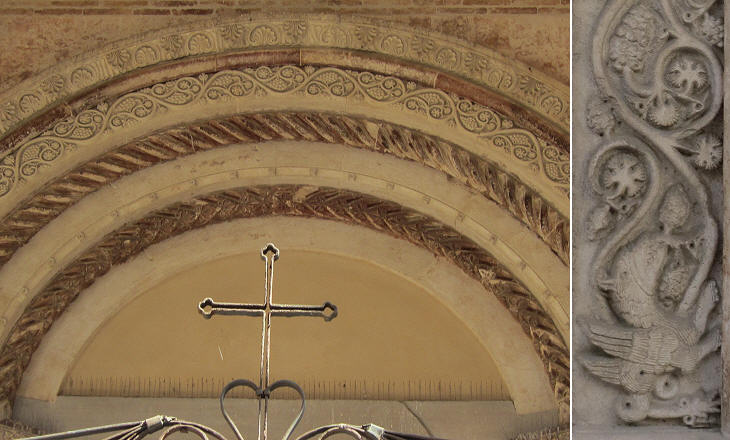 S. Francesco: portal and detail of its decoration

St. Francis of Assisi was highly popular in Fano and in all the other towns covered in this section. S. Francesco was built in the XIIIth century at the initiative of St. Bonaventure, one of the first leaders of the Franciscan Order. The church was redesigned in the following centuries and it was deconsecrated in ca 1900 and turned into a warehouse. All these changes weakened the structure of the building so that its roof collapsed during an earthquake in 1930 and it was never rebuilt. The portal is the only element of the original church. 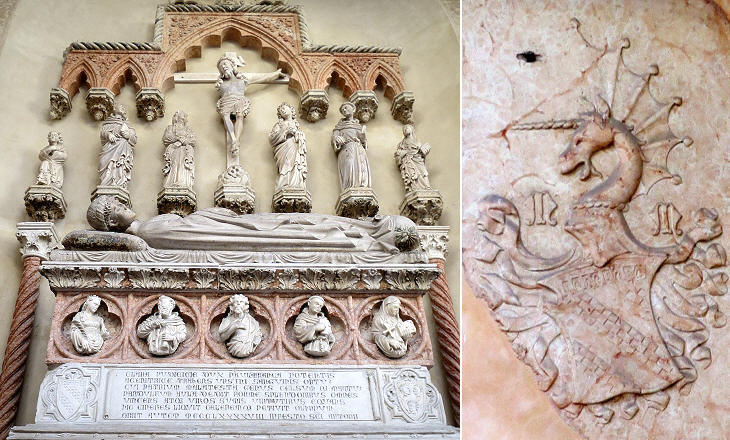 Ex malo bonum (good out of evil - St. Augustine - Sermon LXI). In 1659 during a renovation of the interior of S. Francesco the tombs of some members of the Malatesta family were relocated to the portico of the church which was not affected by the 1930 collapse of the interior. In Rimini too the Malatesta chose the Franciscan church as the funerary chapel for the family (Tempio Malatestiano). The monument to Paola Bianca is a masterpiece of Late Gothic sculpture and it was made by Maestro Filippo di Domenico from Venice. The statues and the use of a reddish stone which was quarried near Verona recall three Gothic portals in Pesaro. 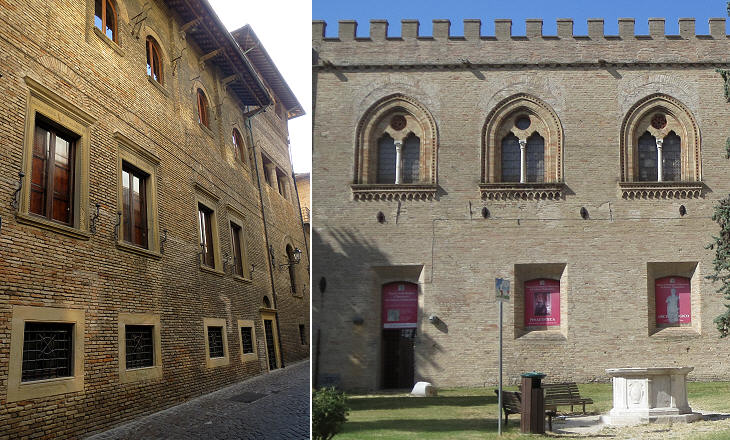 The Malatesta held a small court in a series of buildings opposite Palazzo della Ragione. They were eventually utilized as residences for the papal governors and for tribunals. The whole complex was restored in 1898 and 1930 by adding some details which were believed to emphasize the medieval aspect of the building, such as the battlements, similar to what has occurred in many other palaces throughout Italy (e.g. in Todi). 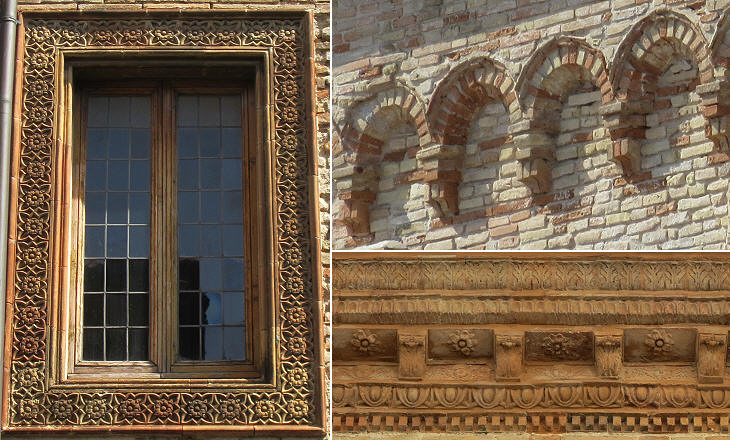 In general Italian towns near the Apennines mountains or in volcanic territories such as those around Viterbo are characterized by the use of stones (e.g. travertine in Rome) for the decoration of palaces and churches. Those in the northern plain or along the coasts such as Fano, where generally stones were not easily available, developed elaborate brickwork patterns for decorating their monuments. 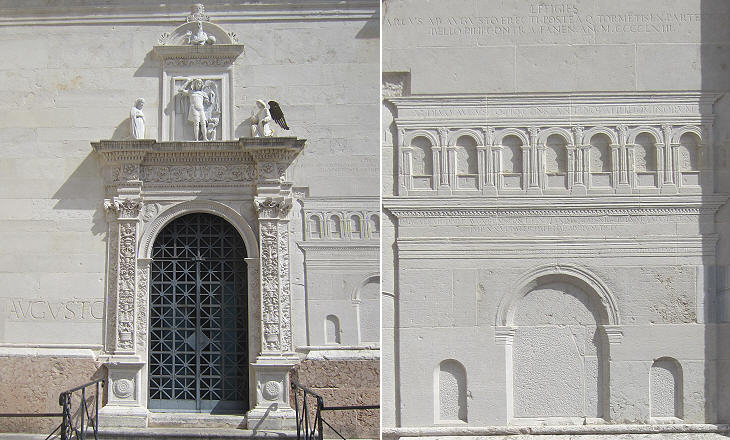 (left) S. Michele; (right) relief showing Arco di Augusto as it was before being damaged

In 1462 Sigismondo Pandolfo Malatesta, at the end of a long conflict with Pope Pius II, was defeated near Senigallia, a port south of Fano, by an army led by Federico da Montefeltro. In June of the following year the latter laid siege to Fano, where Roberto, Sigismondo's son, managed to withstand the enemy assaults until October when eventually he surrendered.
During the siege Federico's artillery hit the upper part of Arco di Augusto, although the latter was now inside the walls of the town. The material which had fallen from the Arch was used to build the complex of S. Michele which included a church and an orphanage. The beautiful portal of the church was designed in 1511 by Bernardino di Pietro da Carona, a Lombard sculptor who worked in the region (see his Monument to Pope Julius II at Ascoli). The pope was portrayed in a tondo of this portal too. The image used as background for this page shows a detail of the lintel. 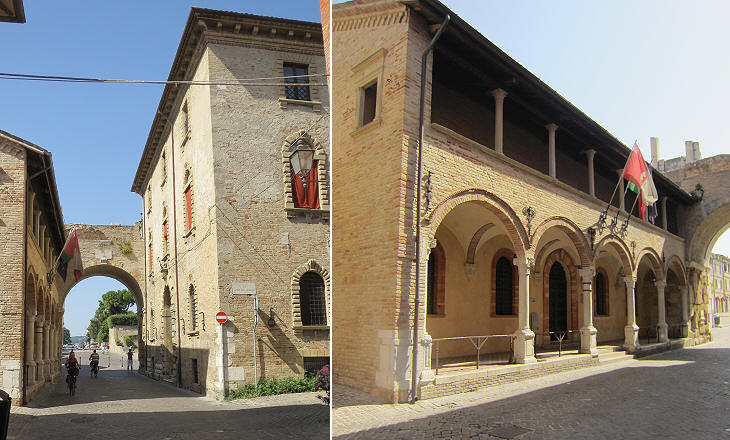 After the surrender of the Malatesta, Fano was directly ruled by governors appointed by the Popes. In 1508 Francesco Maria della Rovere became Duke of Urbino. He already ruled over Senigallia which was added to his new possessions, thus Fano became an enclave inside the Duchy of Urbino.
The governors appointed by the Popes often had to deal with revolts and in some cases they were assassinated. Eventually many inhabitants joined Compagnia della Santa Unione, a brotherhood founded in 1535 whose armed members tried to restore law and order. 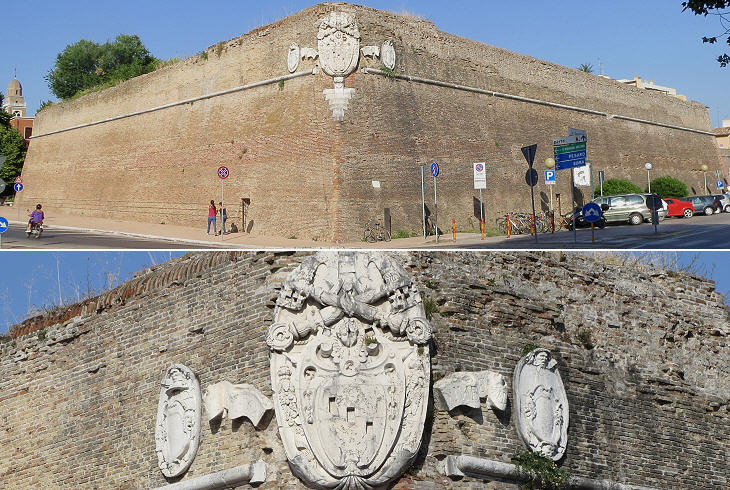 (above) Bastione del Sangallo; (below) detail showing the erased coat of arms of Pope Julius III

During the XVIth century raids by Ottoman corsairs became a constant threat to the Italian coastal towns, not to say that a major Ottoman invasion was feared. Pope Paul III was worried about an Ottoman attack on Rome and he commissioned Antonio da Sangallo, a great military architect, a plan for new walls. Eventually only Bastione del Sangallo was built, but projects were made for strengthening the fortifications of other towns too. In Fano a new bastion designed by Antonio was completed by Luca, his nephew, in 1552. Similar to that in Rome it was embellished with an elaborate coat of arms of the ruling pope. 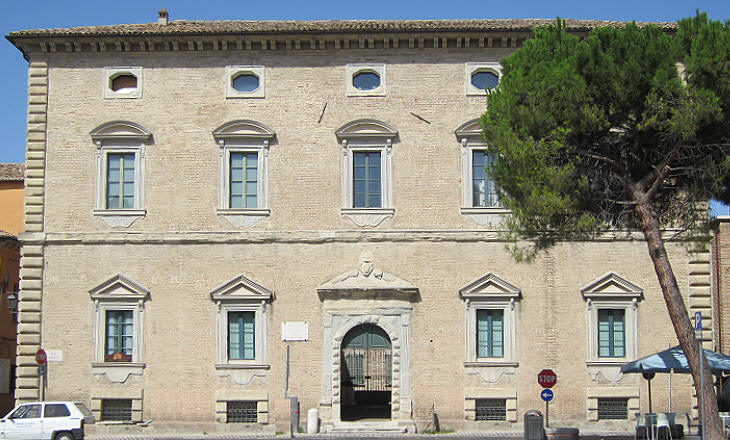 Notwithstanding the confused political situation in town, some families were wealthy enough to build large palaces. The Martinozzi are chiefly remembered for Laura, who married the Duke of Modena and whose daughter Maria Beatrice became the wife of James II and VII, King of England, Scotland and Ireland. Their palace was built in 1560 in a style which recalls Palazzo Farnese in Rome. 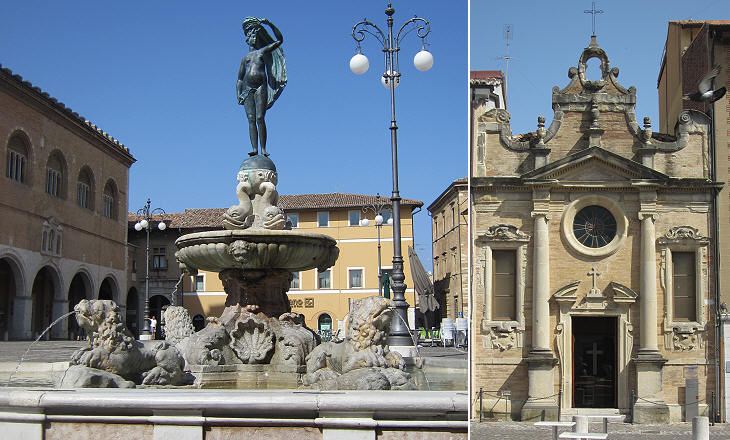 The second half of the XVIth century in Rome was characterized by the construction of many fountains which were built to distribute the water of new aqueducts or ancient ones which had been restored. Provincial towns imitated the capital and in 1576 a fountain was built in the main square of Fano. In 1593 it was embellished with a small bronze statue by Donnino Ambrosi portraying Fortuna, thus recalling the origin of the town. Almost at the same time S. Silvestro was built in the same square to house a sacred image. The upper part of the church was added in 1606, perhaps at the initiative of one of the cardinals appointed by Pope Clement VIII Aldobrandini who was born in Fano and whose father had been the governor of the town.
The fountain was modified in 1697-1699 by the addition of a central structure supporting the statue of Fortuna and of four lions by Ludovico Torresini from Venice. 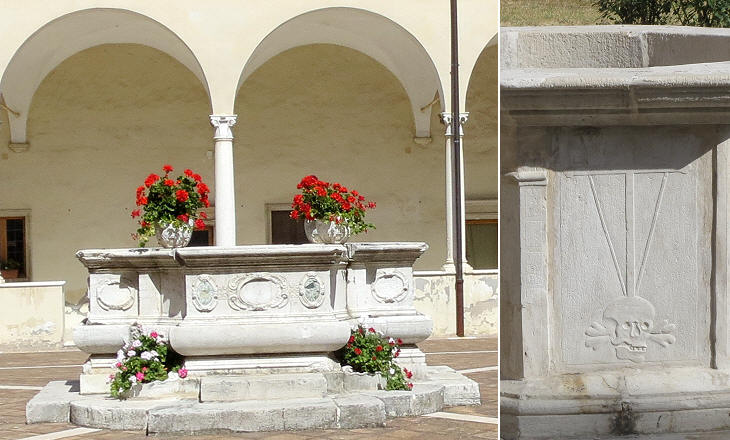 (left) Courtyard in S. Paterniano; (right) detail of the decoration of another well

The influence of Venice can also be seen in some decorated wells of Fano. That in the courtyard of the cloister of S. Paterniano is dated 1557 and signed "Jacobus Venes", probably Giacomo di Stefano Bambagiani from Venice. The second well is probably a XVIIth century work because of its decoration with symbols of Death. 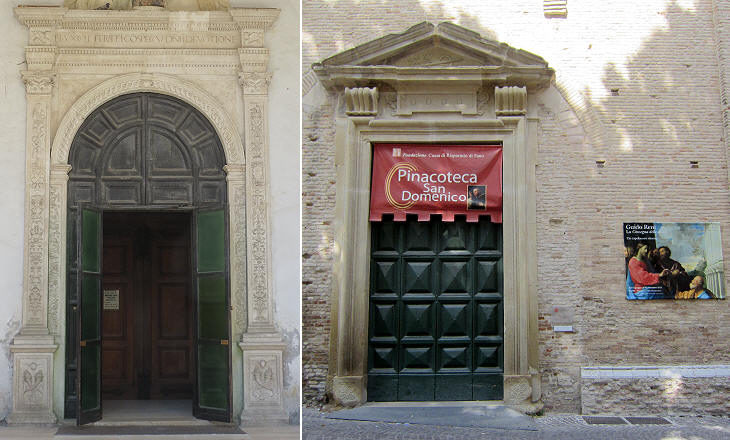 Similar to all towns of the Papal State, Fano has a high number of churches which housed many interesting paintings of the XVIIth/XVIIIth centuries. Some of them were taken by the French in 1797 and never returned. In 2013 the Musée du Louvre agreed to lend a painting by Guido Reni for a temporary exhibition at S. Domenico, a large deconsecrated church.