Links to this page can be found in Book 9, Map C2, Day 4, View C6 and Rione Sant'Eustachio. 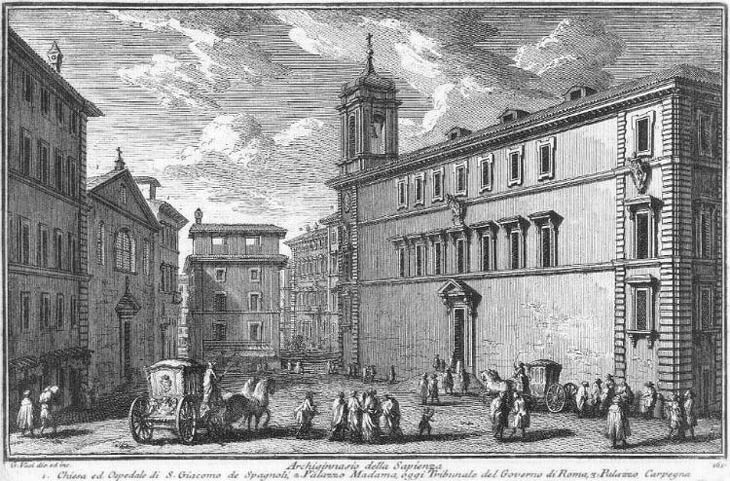 In 1759 Giuseppe Vasi published his ninth book of etchings showing the monuments of ancient and modern Rome. It covered a miscellanea of buildings ranging from colleges to hospitals and hospices for the poor. He opened it with a view of Archiginnasio della Sapienza, the most important high-level educational institution of Papal Rome (arch is a prefix meaning pre-eminent of its kind).
The view is taken from the green dot in the 1748 map below. In the description below the plate Vasi made reference to: 1) S. Giacomo degli Spagnoli; 2) Palazzo Madama; 3) Palazzo Carpegna. These monuments are shown in other pages. The small map shows also 4) Archiginnasio della Sapienza; 5) S. Ivo alla Sapienza; 6) Biblioteca Alessandrina; 7) Teatro Valle. The dotted line in the small map delineates the border between Rione Parione (left) and Rione Sant'Eustachio (right).

The very narrow street between Archiginnasio della Sapienza and S. Giacomo degli Spagnoli was enlarged in 1936-1938 by shortening the nave of the latter and building a new façade in a backward position; the block of houses which is visible at the centre of the plate was demolished so that the view reaches the left side of Palazzo del Collegio Germanico. Palazzo Madama is now hidden by Palazzo Carpegna which was pulled down and rebuilt in a slightly forward position, in line with the façade of Archiginnasio della Sapienza. The street was renamed Corso Rinascimento: see it from Palazzo Carpegna and near S. Andrea della Valle. 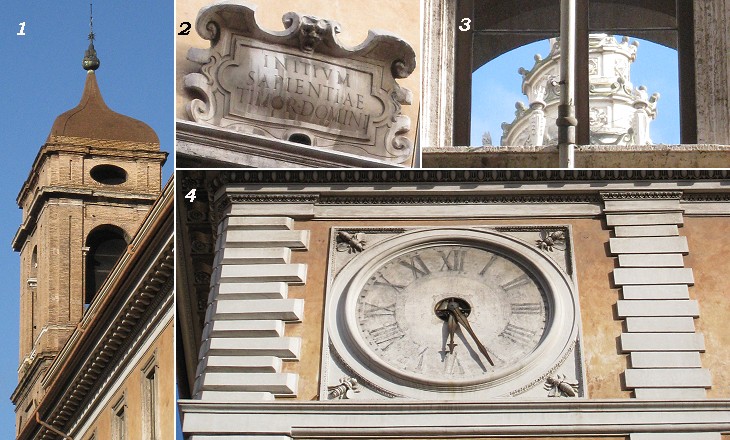 1) Bell tower with the heraldic symbols (three mountains and a star) of Pope Sixtus V; 2) inscription on the façade; 3) lantern of S. Ivo seen through the central window; 4) clock surrounded by bees, heraldic symbol of Pope Urban VIII who placed a sun, another of his heraldic symbols on the southern side of the building

The institution was founded by Pope Boniface VIII with the name of Studium Urbis and it was located in Trastevere. During the XVth century it was moved to Rione Sant'Eustachio and it became known as Archiginnasio della Sapienza (Wisdom) because Pope Sixtus V placed an inscription above its entrance with the following quotation: Initium Sapientiae Timor Domini (The Psalms 111, 10 - The fear of the Lord is the beginning of wisdom). Today the main university of Rome is named La Sapienza. 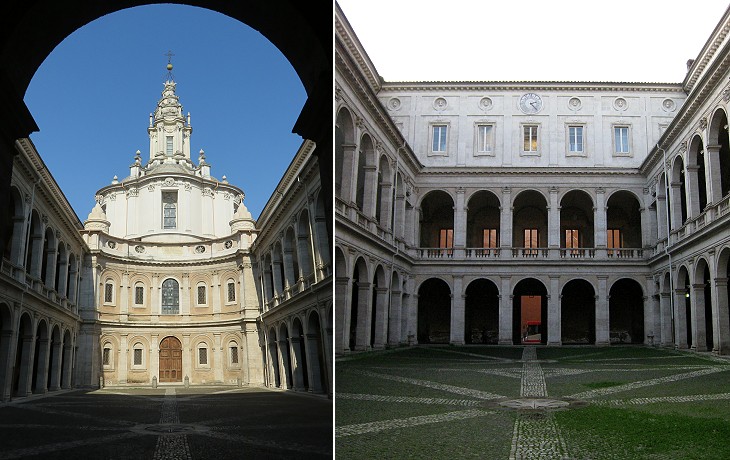 Courtyard: (left) eastern side with S. Ivo; (right) western side where the main entrance is situated

24th February 1645. We passed the afternoon at the Sapienza, a very stately building full of good marbles, especially the portico, of admirable architecture.
John Evelyn's Diary and Correspondence - 1644-1645
In 1564 Pope Pius IV commissioned Pirro Ligorio a project for a total renovation of the buildings which housed Archiginnasio della Sapienza: in 1561 Ligorio had engraved Antiquae Urbis Imago (see a detail of it - it opens in another window), one of the first reconstructions of ancient Rome where he had shown his deep knowledge of classical architecture. His project for Archiginnasio della Sapienza was based on a large rectangular courtyard with two semicircular walls at its ends (a design similar to that he made for the courtyard of Casino di Pio IV in 1562).
Giacomo Della Porta, who actually built most of the current palace in the following years, made many changes to Ligorio's project, but the semicircular façade of S. Ivo della Sapienza in the courtyard is part of the original project.
You may wish to see a detail of the courtyard in the Hall of Fame of the website. 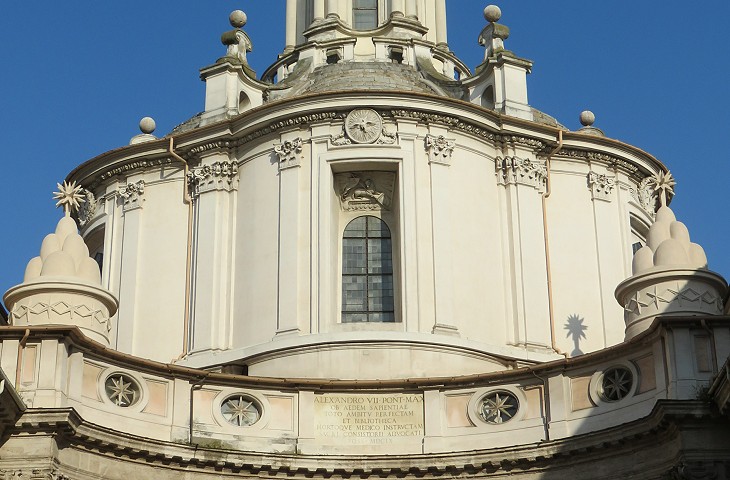 In 1632 Gian Lorenzo Bernini suggested the name of Francesco Borromini to Pope Urban VIII as a master builder capable of completing the construction of Archiginnasio della Sapienza; Borromini was a nephew of Carlo Maderno, a famous architect of the early XVIIth century, and at that time he was working as assistant to Bernini in the completion of Palazzo Barberini; the task he was assigned was rather limited: the completion of the courtyard, the construction of a small church at its eastern end and a second entrance from Piazza di S. Eustachio.
Borromini could only follow the pattern established by Della Porta for the courtyard, but he showed his ingenuity in the design of the church. Pope Urban VIII endorsed Borromini's 1642 project: it was relatively inexpensive (the decoration was based on stucco works), it evocated the Pope's heraldic symbol (the lantern was supposed to represent the sting of a bee) and it was supported by a rationale linked to wisdom. 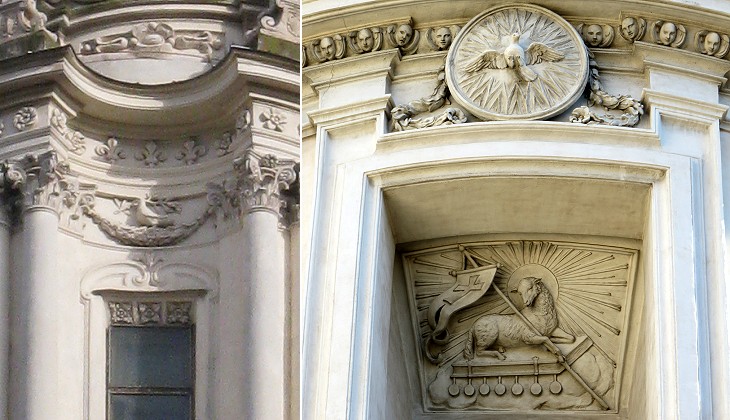 Details of the decoration of the lantern (left), with heraldic symbols of Pope Innocent X, and of the dome (right) portraying the Lamb of God and the Scroll of the Seven Seals

Pope Urban VIII could not see the completion of the dome and of the lantern which occurred in 1650. They were therefore decorated with the heraldic symbols of the new Pope.
The image used as background for this page shows its very tip.
Archiginnasio della Sapienza had academic courses on Theology and Law and its church was dedicated to St. Yves, patron saint of lawyers, although the church was associated also with four other saints: Fortunatus, Leo, Luke and Pantaleon. 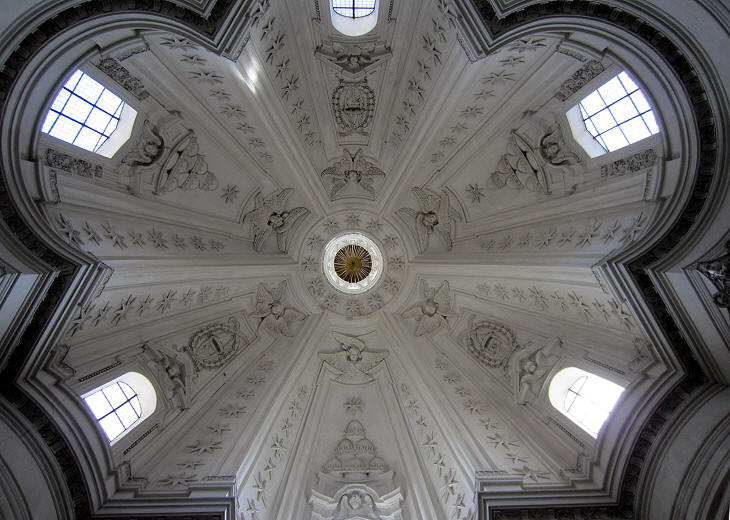 King Solomon was known for his wisdom and his seal had a hexagonal shape (up and down triangles) and so the plan of the church envisaged by Borromini was hexagonal with three concave sides and three convex sides; the triangles were also a reference to the Holy Trinity. The decoration of the interior was made in 1662 and therefore it bears the heraldic symbols of Pope Alexander VII. 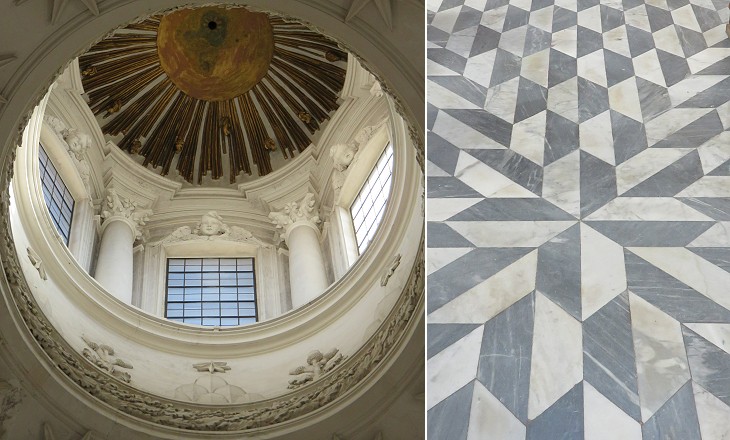 (left) Interior of the lantern. You may wish to compare it with that at S. Andrea al Quirinale by Bernini; (right) "optical" pavement, similar to that at S. Giovanni in Laterano

S. Ivo alla Sapienza is regarded as Borromini's masterpiece, but in the late XVIIIth century and for most of the XIXth century art historians considered it the most striking example of the decline of Italian art after the peaks reached during the Renaissance (you may wish to see a page on how opinions changed during the centuries).
Among the great figures of the Roman High Baroque the name of Francesco Borromini stands in a category of its own. His architecture inaugurates a new departure. Whatever their innovations, Bernini, Cortona, Rainaldi, Longhi and the rest never challenged the essence of the Renaissance tradition. Not so Borromini, in spite of the many ways in which his work is linked to ancient and sixteenth-century architecture. It was clearly felt by his contemporaries that he introduced a new and disturbing approach to old problems.
Rudolf Wittkower - Art and Architecture in Italy 1600-1750 - Penguin Books 1958
This book and other essays by Wittkower have been fundamental in promoting a reassessment of the value of Borromini's very innovative architectural solutions.

(left-above) A laughing mask inserted in a capital; (left-below) an egg-and-dart classical motif which Borromini turned into a very new one; (right) detail of the stucco decoration with a limited use of golden elements as at S. Carlo alle Quattro Fontane

The inner courtyard and the church show the heraldic symbols of the popes who one after the other contributed to building and decorating Archiginnasio della Sapienza and S. Ivo. 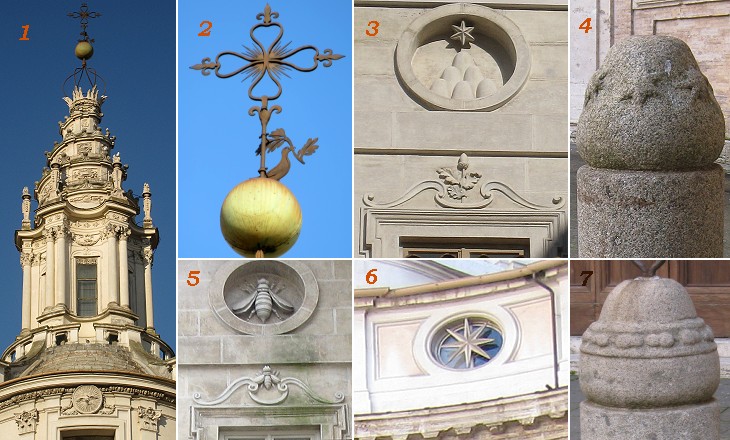 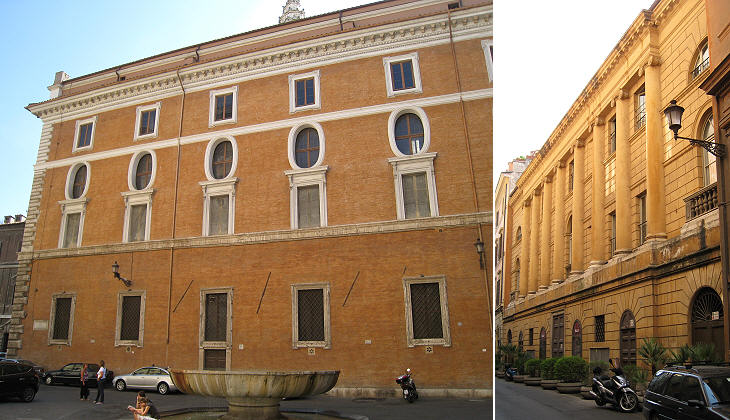 Archiginnasio della Sapienza included Biblioteca Alessandrina named after Pope Alexander VII, who provided the students with a large library which included that of the former Dukes of Urbino (13,000 volumes which today are in the modern University of Rome). The Pope promoted also the construction of Biblioteca Angelica, which however was completed almost a century later.
Teatro Valle was inaugurated on January 7, 1727, the first day of carnival: Roman theatres were active only during the carnival period, but notwithstanding the short season in the XVIIIth century they were a very profitable investment. In December 1816 Gioacchino Rossini was commissioned an opera for the forthcoming carnival and he composed La Cenerentola (Cinderella) in a rush. The premiere at Teatro Valle on January 25, 1817 had the same unfavourable reaction which had occurred a year earlier to Il Barbiere di Siviglia at Teatro Argentina, but eventually La Cenerentola became the hit of the season. It was the last Italian opera buffa by Rossini and according to many his masterpiece. The façade of Teatro Valle was redesigned in 1821 by Giuseppe Valadier.

Next plate in Book 9: Prospetto principale del Collegio Romano.
Next step in Day 4 itinerary: Palazzo Madama.
Next step in your tour of Rione Sant'Eustachio: S. Eustachio.