- Subiaco
(a woman at le Colonnacce by Alberto Pisa)

At the beginning of the XXth century there was a great interest in all aspects of medieval art and a widespread disregard for all works of art produced in the period between approximately 1530 and the end of the XVIIIth century. A luxury book printed in 1905 had the ambitious objective of selecting The Hundred Best Pictures (Charles Letts and Co. - London). 15 of the 100 selected masterpieces belonged to the Italian School, but, with the exception of a painting by Tintoretto they were all painted before 1530. A remarkable absence was that of Michelangelo, whose later works were regarded as the beginning of Italian art decadence.
This explains why painter Alberto Pisa included so many views of Subiaco and of its medieval monasteries (S. Scolastica and Sacro Speco/S. Benedetto) in illustrating a 1905 book on Rome.

The view was taken from the road leading to the monastery of S. Benedetto. There is a clearing in the wood where everybody stops and turns back to see Subiaco and this explains why the painting and the photo are so similar. 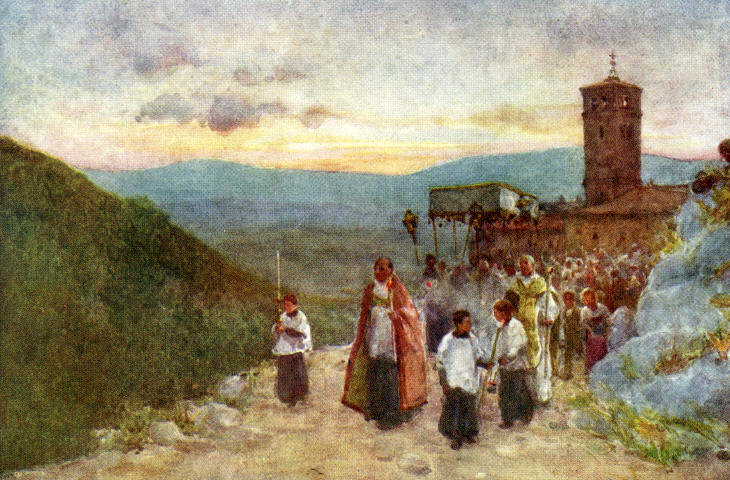 Alberto Pisa - Procession near S. Scolastica on its way to S. Benedetto

German and British travellers of the XVIIIth and XIXth century were often very critical of the pomp of religious ceremonies in Rome. Comments usually made reference to the miserable life led by most of the inhabitants of the Papal State and criticized the Papal government for neglecting to introduce those reforms which in Northern Italy and Tuscany had significantly improved the conditions of the poor and for spending so much money and time on ceremonies.
With the unification of Italy in 1870 the most pompous ceremonies which used to take place in Rome and in other towns of the Papal State came to an end. But the descriptions of the ceremonies of the past had created an expectation in the armchair travellers which Pisa was glad to satisfy by painting a procession coming out from S. Scolastica at sunset. 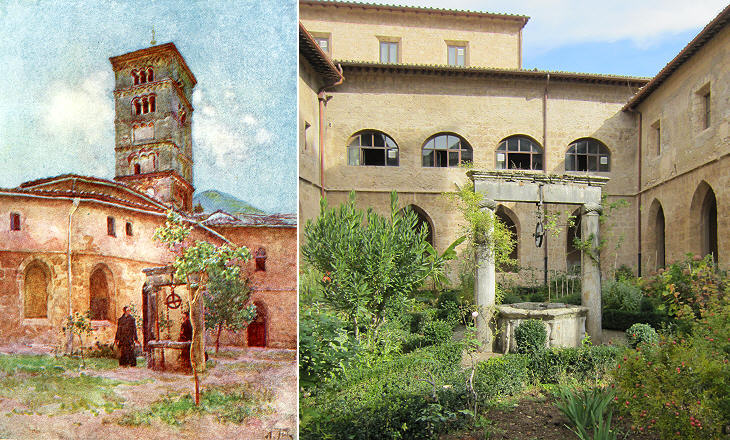 The solitary life of monks and nuns has always fascinated those who, although enjoying some of its aspects, often wonder how long they will be able to sustain the frantic rhythm of their lives. The elegant well in one of the cloisters of S. Scolastica is still there and attracts the attention of both painters and photographers.

Pisa portrayed a lonely old peasant absorbed in his prayers on the Scala Santa of S. Benedetto: definitely he knew how to capture the attention of his readers. The image leads everybody to try to guess which grace the peasant was seeking. 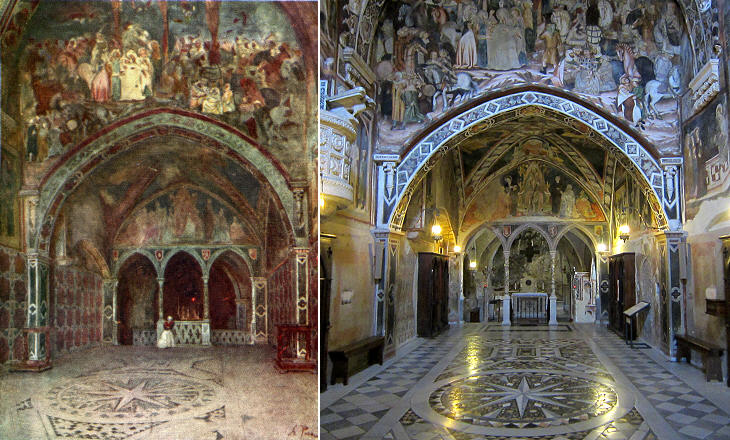 Also in this other view of S. Benedetto Pisa included a lonely believer on his knees to enhance the spirituality of the view.

A skilled painter has ways and means to improve what he actually sees: the faded colours of frescoes can be revived, a few flowers and the branches of a tree can appropriately frame the door of the Upper Church of S. Benedetto and in the inner cloister of S. Scolastica (image below) the bright light of the sun can be tempered, so that it does not cause an excess of contrast.