Piazza di S. Giovanni in Laterano
(Vasi at work in the Grand View of Rome) 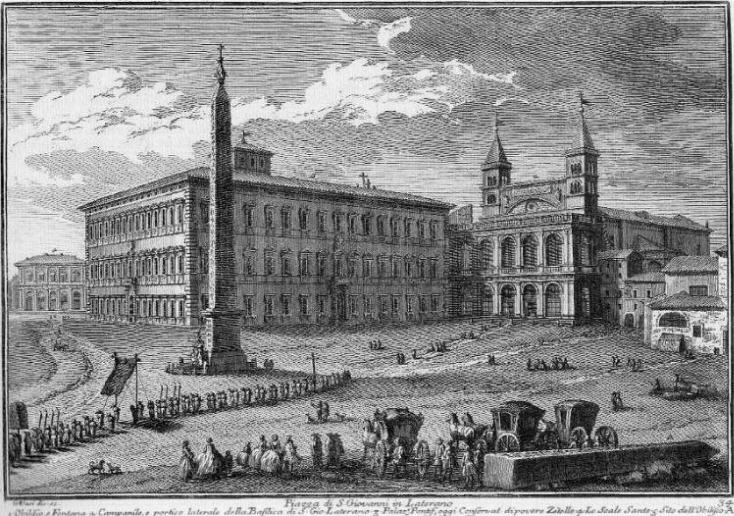 The plate shows the western square of S. Giovanni in Laterano (the eastern square with the main façade is shown in plate 46). It was designed during the pontificate of Pope Sixtus V. The plate shows a procession coming from Santa Maria Maggiore (you may wish to see the grand procession which accompanied the Pope to S. Giovanni in Laterano after his election). The two basilicas were linked by a straight street which was opened in 1575. The square is shown in two other plates by Vasi: 101 - Battisterio Lateranense and 172 - Spedale di S. Giovanni Laterano.
The view is taken from the green dot in the 1748 map here below. In the description below the plate Vasi made reference to: 1) Obelisco e fontana; 2) Campanile e portico laterale della Basilica di S. Giovanni in Laterano; 3) Palazzo Pontificio; 4) Scala Santa; 5) a second obelisk (Obelisco Sallustiano) lying on the ground. At Vasi's time this second obelisk (which had been found at Horti Sallustiani) was planned to be placed in front of the main façade, but eventually it was decided to relocate it to Trinità dei Monti. 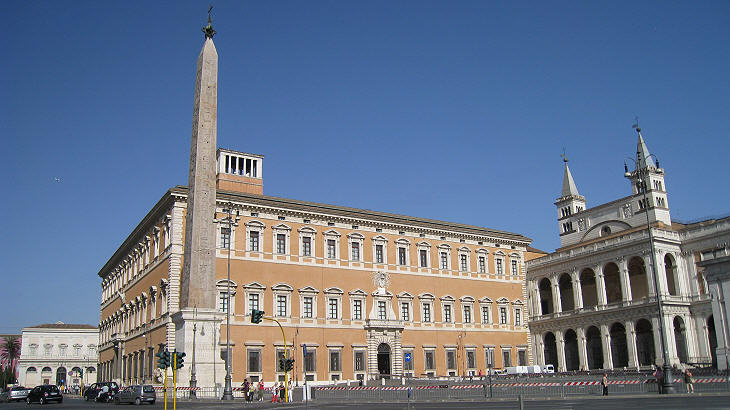 If only the square were not a focal point of Rome's traffic, the view would almost exactly match the plate by Vasi. As a matter of fact some changes actually occurred in the 1880s when the apse of the basilica (which is visible on the far right part of the plate) was pulled down to make room for a larger one. Other facilities of the basilica (which is an extraterritorial property of the Holy See) were built at the side of the façade. 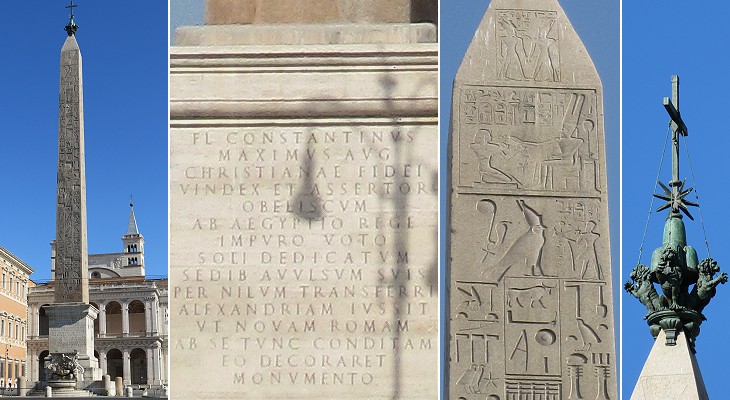 (left to right): The obelisk; one of the inscriptions dictated by Pope Sixtus V; detail of its reliefs; bronze top

This is the oldest and tallest obelisk of Rome and also the last to be brought from Egypt (you may wish to see all the obelisks of Rome in one page). It was originally built to decorate the Temple to Amun at Karnak near Thebes and it was dedicated to Pharaoh Thutmosis IV. Emperor Constantine considered using it for embellishing Nova Roma (Constantinople) and the obelisk was brought to Alexandria together with a second obelisk which was dedicated to Pharaoh Thutmosis III. Of the two obelisks the latter was eventually brought to Constantinople and placed in its Hippodrome, while the former was assigned to Rome by Emperor Constantius II; the transportation occurred in 357 on a specially built ship. In 1587 this obelisk was found in the Circus Maximus and in the following year it was relocated to Piazza S. Giovanni. It is very well preserved, with easily readable hieroglyphics. Pope Sixtus V placed the whole array of his heraldic symbols on its top: not only the three mountains with the star, but also the lion holding the pears. The fountain near the obelisk is covered in another page. 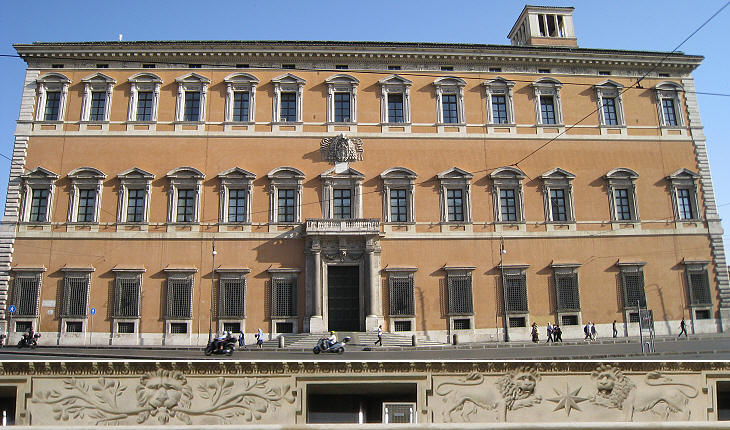 Façade towards S. Maria Maggiore and detail of its cornice (you may wish to compare it with that of the eastern façade which was built by Pope Clement XII)

The Lateran Palace is a hymn to Pope Sixtus V. His heraldic symbols are everywhere from the entrance to the cornice. It was designed by Domenico Fontana who coped with all the challenging tasks the pope commissioned him (reconstruction of aqueducts, relocation of obelisks, a net of conduits and fountains, the opening of new streets, etc.). It was completed in 1589, but the Popes preferred to live in Palazzo del Quirinale and eventually this large building was used as a hospital or a hospice; at the time of the etching it was a Conservatorio di povere zitelle, one of many institutions caring for unmarried women.
Today the palace (which belongs to the Holy See) houses a historical museum of the Papal State. 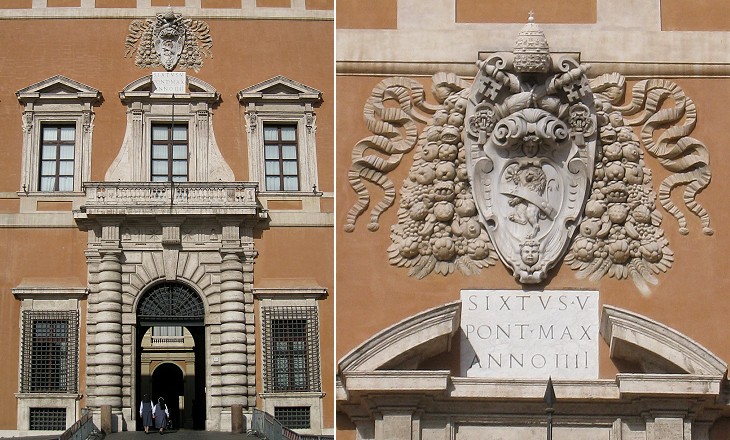 Portal and coat of arms on the main façade 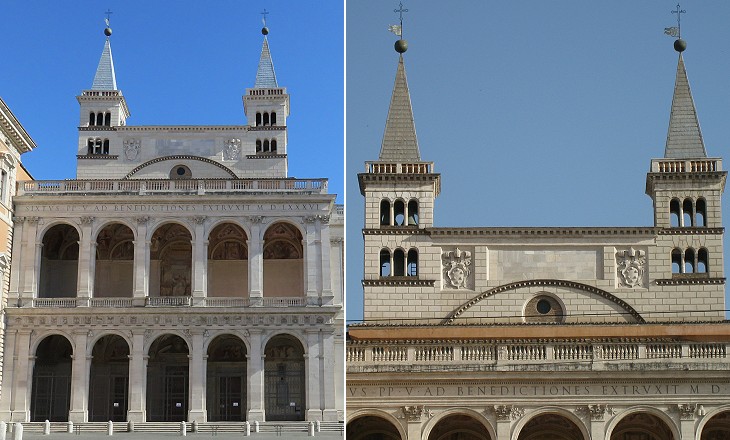 According to tradition the basilica was built on land belonging to Emperor Constantine; although the area was located inside the walls of Rome, it was remote from the centre of the city; the layout of the church was based on an east-west axis: this meant that its entrance was oriented towards Porta Asinaria, in other words the basilica turned its back to the city. For this reason Pope Sixtus V decided to build a large loggia on the northern arm of the transept, the part of the building which faced the city. A few years later Pope Clement VIII lavishly decorated the transept and placed a great altar at its southern end: in this way two churches coexisted: the east-west one (in very poor condition) and the south-north one which was entirely modernized. Later on the east-west one was redesigned by Francesco Borromini for the 1650 Jubilee Year and it was given a new façade by Pope Clement XII in 1735. The façade of the transept retains part of its medieval structure, because the two bell towers, notwithstanding the coats of arms of Pope Pius IV, were built during the pontificate of Pope Innocent II in the XIIth century. 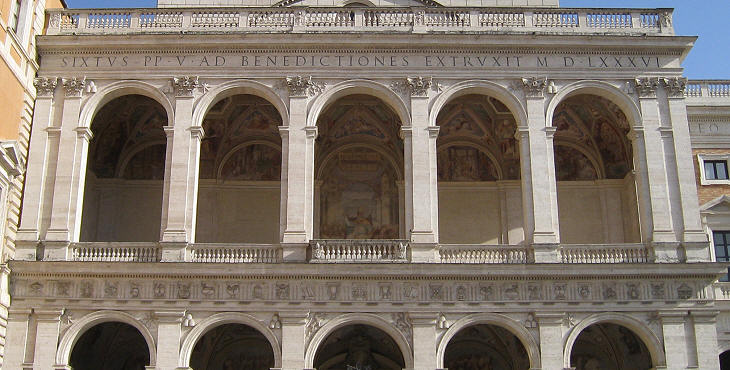 The loggia was used for the papal blessings (SIXTUS PP V AD BENEDICTIONES EXTRUXIT) and it was designed by Domenico Fontana. You may wish to see this side of the basilica before and after the changes made by Pope Sixtus V in a 1588 Guide to Rome. 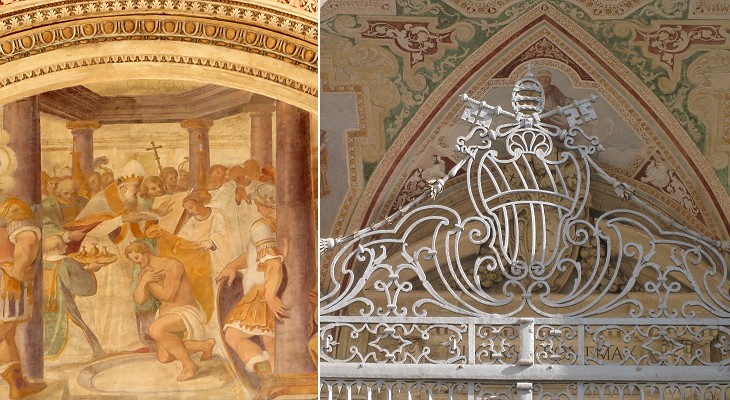 Fresco in the loggia depicting The Baptism of Constantine (the porphyry columns are those of the nearby Baptistery); (right) Coat of arms of Pope Clement XII on a railing which closes the portico. It can be seen in the image used as background for this page 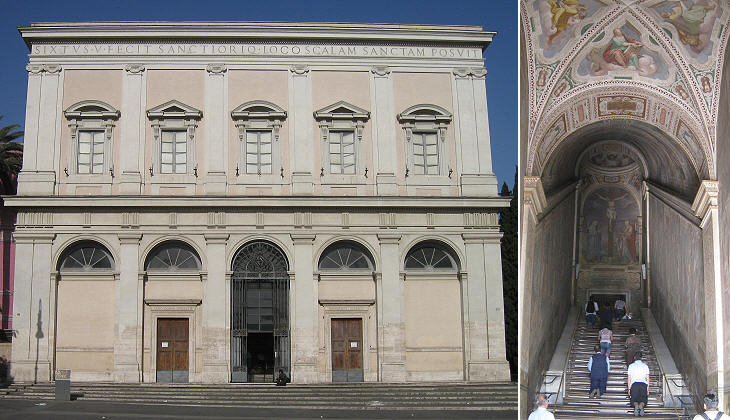 (left) Façade (four of the entrances were closed in 1853); (right) the staircase

Domenico Fontana built this palace to house the staircase of Pontius Pilate's house, which according to one account was brought to Rome by St. Helena, mother of Emperor Constantine. Its 28 steps may be ascended only by worshippers on their knees. Today many do it to pray for the recovery of one of their next of kin, but in the past they did it to gain indulgences, i.e. the total or partial remission of the time to be spent in Purgatory by their souls or those of their relatives.
There were such odd differences in the speed of different people, too. Some got on as if they were doing a match against time; others stopped to say a prayer on every step. This man touched every stair with his forehead, and kissed it; that man scratched his head all the way. The boys got on brilliantly, and were up and down again before the old lady had accomplished her half-dozen stairs. (..) Most of the penitents came down, very sprightly and fresh, as having done a real substantial deed which it would take a good deal of sin to counterbalance. Read more of Charles Dickens's account of his visit to Scala Santa in 1845 and about Fynes Moryson's 1594 visit. Stairs which are/were ascended by worshippers on their knees can be seen in other churches, e.g. at Sacro Speco and at S. Michele e Magno. 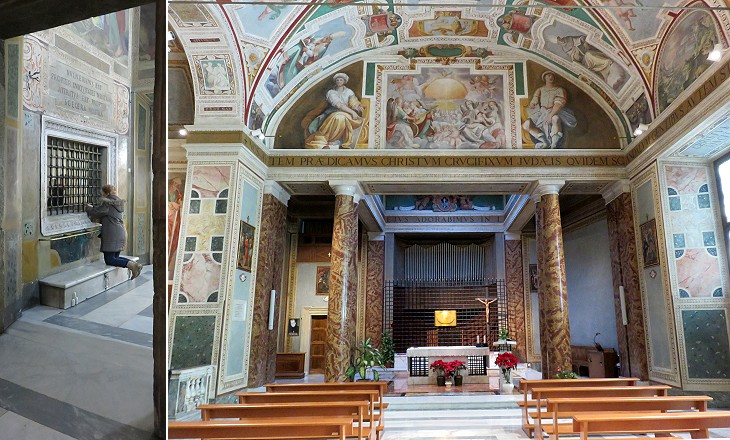 (left) Grill at the end of the main staircase through which one can see Cappella del Sancta Santorum (Holies of Holies, because it houses many relics); (right) Cappella di S. Lorenzo (it was enlarged and modified in 1936)

Domenico Fontana modified an existing medieval complex which included a private papal chapel dedicated to St. Lawrence. The building was decorated with marbles and frescoes by Pope Nicholas III in 1277. Fontana redesigned it and created a new chapel dedicated to St. Lawrence, but occasionally some of the ancient walls with fragments of their frescoes have been identified. 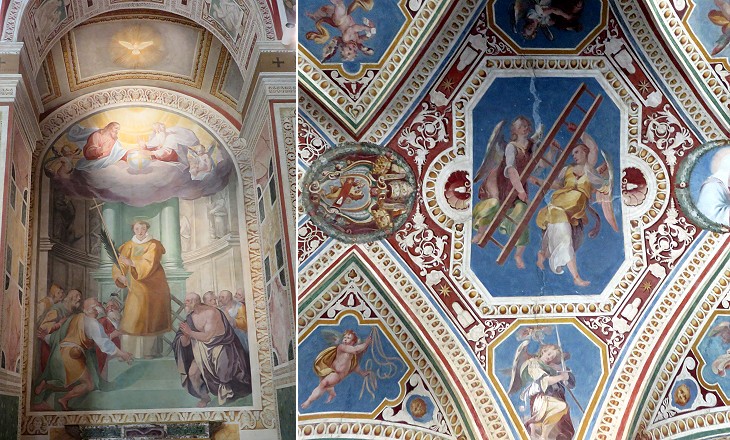 (left) S. Lorenzo, fresco by Baldassarre Croce; (right) Angels carrying the staircase, fresco on the ceiling of the entrance hall (it recalls paintings and reliefs related to angels carrying the Holy House of the Virgin Mary to Loreto, a sanctuary Pope Sixtus V had in his heart)