- Tivoli
(a woman at le Colonnacce by Alberto Pisa)

Black's Beautiful Books is the name of a series of illustrated books published at the beginning of the XXth century by A. and C. Black, Soho Square, London W. The price of the books ranged from 5s. to 20s. The 20s series (size 9x61/2 ins.) were embellished with full-page illustrations, which at the time were reserved only to very expensive books.
The books were dedicated to London and the British countryside, foreign countries, birds and a few contemporary painters. Italy was represented in the series by seven titles: Florence and some Tuscan Cities, The Italian Lakes, Naples, The Riviera, Rome, Sicily and Venice. The illustrations of Rome and Sicily were commissioned to Alberto Pisa, an Italian painter who lived and worked in London. His views of Rome and its environs show that he had clearly in mind what were the expectations of an armchair traveller sitting in a Mayfair club. 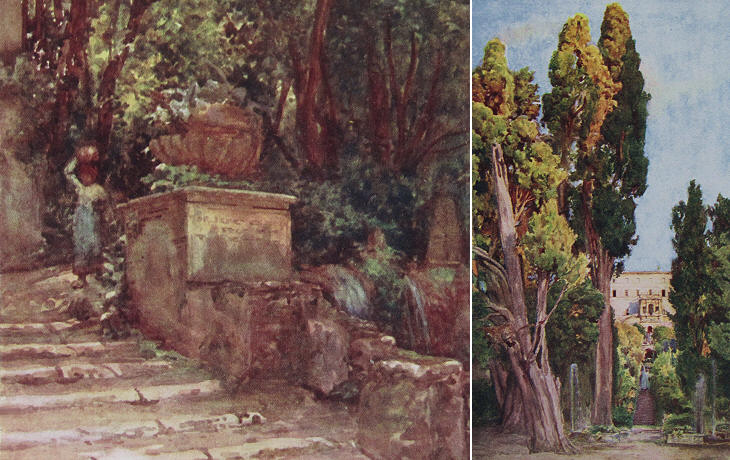 The excursion to Tivoli was a must for every traveller who visited Rome and Alberto Pisa chose to illustrate some of its monuments and in particular the gardens of Villa D'Este. He highlighted the centenarian cypresses in the lower part of the gardens.
Villa d'Este is known for its many fountains and there is water everywhere in the gardens: nevertheless, Pisa painted a woman carrying water on her head; he was aware that the reader of the book was interested in seeing a highly popular picturesque image of Italy and would not have queried its likelihood. A cardinal at Villa d'Este

Another way to give a Roman flavour to an image was to portray in it a member of the clergy. In this illustration of Villa d'Este, Pisa portrayed a cardinal walking in the gardens with a priest. The red dress of the cardinal is the focal point of the painting. As a matter of fact the villa was leased in 1851 to Cardinal Gustav Adolf von Hohenlohe-Schillingsfürst, who carried out the first restorations of the gardens and lived there until his death in 1896. Tivoli retains many medieval buildings near Porta del Colle. Pisa was impressed by a medieval house with an elegant staircase built upon an ancient column and he painted it in two illustrations: in the second one we see again a woman carrying water. 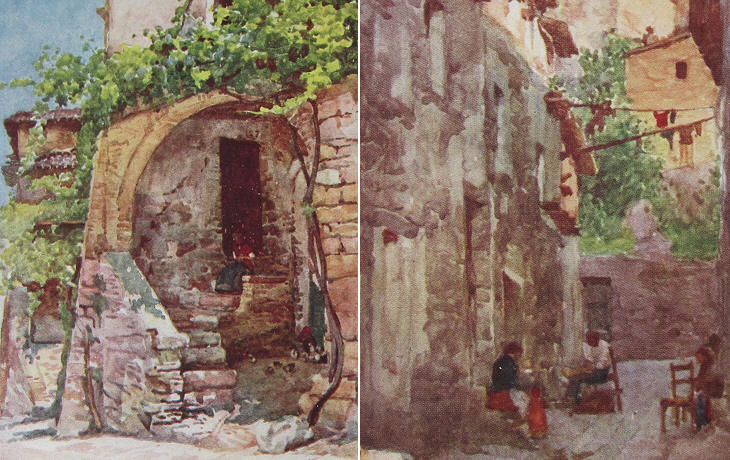 A rustic dwelling and a street at Anticoli Corrado

Many writers had described to the British public the pleasures and the discomforts of a summer in one of the many little towns near Rome and this explains why Pisa dedicated several illustrations to the countryside near Tivoli. Anticoli Corrado, notwithstanding its being a very small town without buildings of interest, was known because most of the models who offered their services on Scalinata di Trinità dei Monti (Spanish Steps) came from there You may wish to read an amusing account about these models by Charles Dickens. 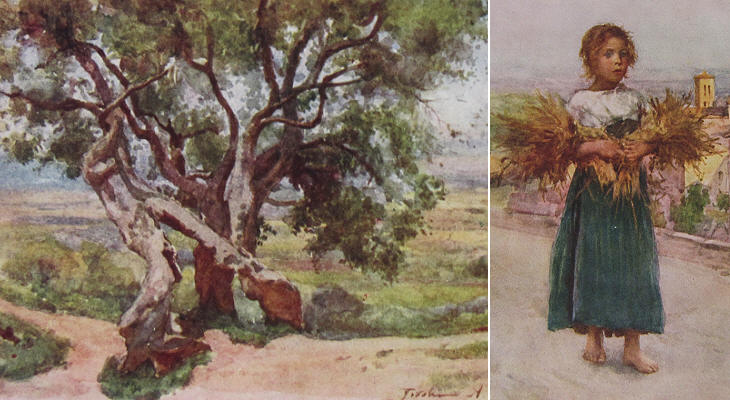 An olive tree and a gleaner in the Campagna near Tivoli

Many other illustrated books showed Rome to the British public: in 1903 a glossy book was published in London by William Glaisher 265, High Holborn. It was the English translation of a French book by Francis Wey, Rome, its Churches, Monuments, Art, and Antiquities. It had about 280 illustrations, to a large extent sketches by Henri Regnault, a young French painter who had died in 1871 during the Franco-Prussian War.
So the illustrations portrayed costumes and a way of living which in 1903 had been largely modified by the effects of progress and of the unification of Italy, but clearly the public liked these picturesque images. 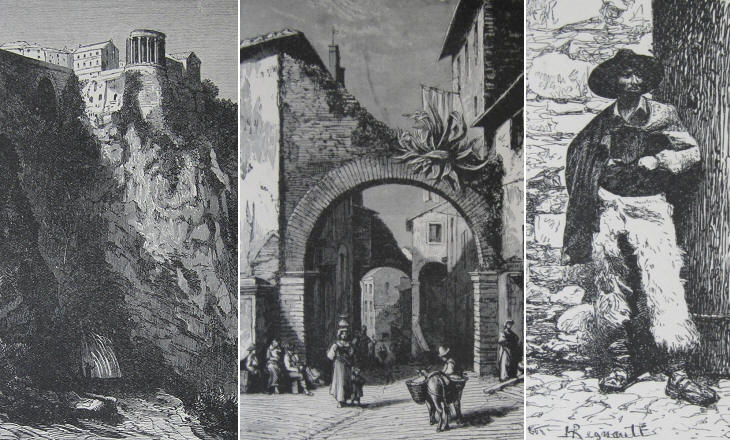 Wey's book had some views of Tivoli which included its ancient Roman temples.