You may wish to read an introductory page to this section first.

Mount Ararat is the tallest peak of Turkey; its elevation is estimated to be 5,137 m/16,854 ft. It is located at the far east of the country, very near its border with Iranian Azerbaijan and Armenia. The mountains which surround the Anatolian tableland are not as high as Mount Ararat, yet the Taurus Mountains which lie along the Mediterranean Sea have peaks which reach 10,000 ft.
These mountains protect the coastal plains from the cold winds which come from the north.

The view of the lake of Eyerdir is indescribably beautiful and may compare with any of the celebrated lakes in Italy. A small island well wooded with poplars and other trees was in front of our resting place. Behind at a short distance rises a mountain. (..) On either side rose more distant ridges peaked and beautifully coloured.
Francis Vyvyan Jago Arundell (chaplain to the British factory at Smyrna) - Discoveries in Asia Minor - 1834
Egirdir Golu is a freshwater long and narrow lake named after the town of Egirdir. It is situated at an altitude of 900m/2,700ft. Egirdir is a modern Turkish adaptation of Akrotiri (steep mountain), the town's Greek name.

A rock which blocked the passage to a short peninsula was fortified by the Byzantines. It is likely that the early inhabitants of Egirdir came from a nearby ancient town called Prostanna which was mentioned by Ptolemy and in a list of bishops attending the 381 Council of Constantinople.

Walls which resemble those of Constantinople

Egirdir flourished under the Seljuks and in 1280 Felekeddin Dundar Bey, the leader of a Turkish tribe (Hamidogullary) made it the capital of a small principality. He also renamed the town Felekabad, but the name did not last. In 1417 the Ottomans took control of Egirdir, which in the following centuries lost most of its importance.

(left and right) Portal of Dundar Bey Medresesi, a detail of which is shown in the image used as background for this page; (centre) minaret of Hizir Bey Camii

Egirdir was located along the route leading from the Aegean coast to Konya and Central Anatolia; the Seljuks built a caravanserai and a warehouse outside the walls of the town. These were converted into religious buildings by the Hamidogullari rulers; the caravanserai became a medrese (a Koranic school) and the warehouse a large mosque; a new caravanserai was built on the route to Konya.

(left) Portal of Hizir Bey Camii; (right) a capital of the medrese courtyard

The mosque on the left especially has a gate of extreme beauty, covered with ornaments, and an inscription in Cufic running all around it. (..) The disposition of the edifice (has) pointed arches, supported by pillars, the capitals of which are the very prototypes of what are seen in our oldest churches (e.g. at S. Giovanni in Laterano). Two had birds with extended wings; others with grotesque figures, and one with leaves. Arundell
The Muslim prohibition against life-like imagery of all living creatures led to the development of an art based on calligraphy and geometric patterns. Yet the Seljuks (and after them the Ottomans) were not so strict about this aspect of Islam. It is not unusual to see reliefs and statues portraying animals, in particular birds, even inside a religious building such as a medrese.

I threaded my way through the dirty streets to the end of the point, where the broad blue lake, surrounded by rugged hills, just assuming the rich tints of sunset, lay stretched before me, while the foreground was broken by two beautiful little islands covered with trees; some red-roofed houses seen amidst the branches of tall and graceful poplars added to the picturesque effect. These islands contain about 150 houses, half of which are inhabited by Armenians or Greeks.
William Hamilton - Researches in Asia Minor, Pontus and Armenia - 1842 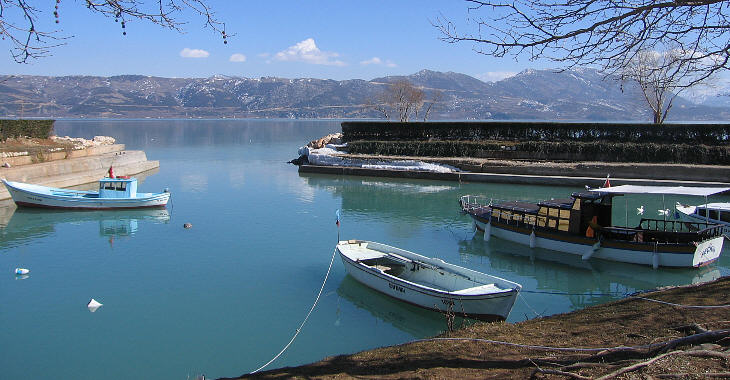 A Greek Orthodox community lived on a small island linked by a causeway to Egirdir: its members had to leave in the 1920s when Turkey and Greece agreed on a vast exchange of population. There were fourteen churches, only one of which (Ayastefanos) still exists; it is deconsecrated and apparently nothing indicates its former use apart from a tourist signpost with its name.
The island has now many restaurants offering the fish of the lake; in winter the lake has a very Alpine appearance with snow-capped mountains all around.

Kuyucak Dagi, a ridge of mountains to the southeast of the lake

The view over the lake was magnificent, and the vast expanse of water, spread out as it were at our feet, was a most grateful sight after the barren plains and hills over which we had so long been travelling. But the shape of the lake was very different from what I had expected, for after contracting to a width of very little more than a mile, at a spot three miles to the west of the hill, it again suddenly expands, forming another large though less extensive sheet of water. Hamilton