at the Cloister of S. Giovanni

The charm of charms at St. John Lateran is the admirable twelfth-century cloister which was never more charming than yesterday. (..) I was in the loving mood of one's last days in Rome.
Henry James - Italian Hours - 1909 (from a piece written in May 1873). 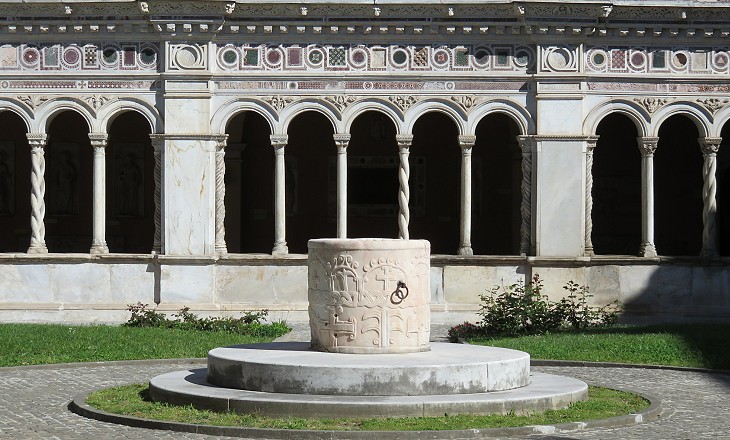 IXth century well at the centre of the cloister 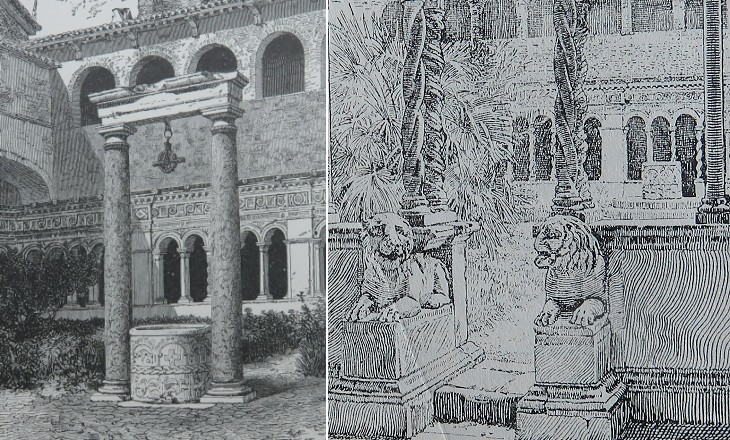 XIXth century book illustrations give an idea of the appearance of the cloister when Henry James visited it. The main change relates to the well which most likely was still in regular use in 1873. 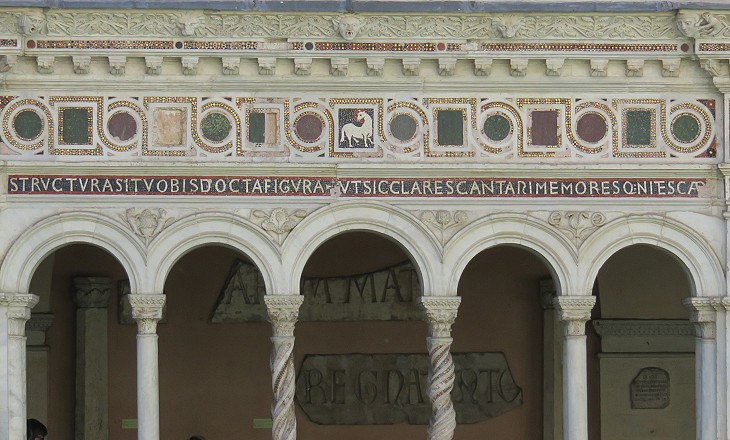 Inscription listing the duties of the Canons

The cloister is the masterpiece of the Vassalletto (father and son) who were architects as well as sculptors and mosaicists. They were active at a time when the Roman Church enjoyed great power. Pope Innocent III and after him Pope Honorius III commissioned them the embellishment of S. Paolo fuori le mura, S. Lorenzo fuori le mura and of the Anagni Cathedral. They were in competition with the Cosma family, who have given their name to a typical decorative mosaic. 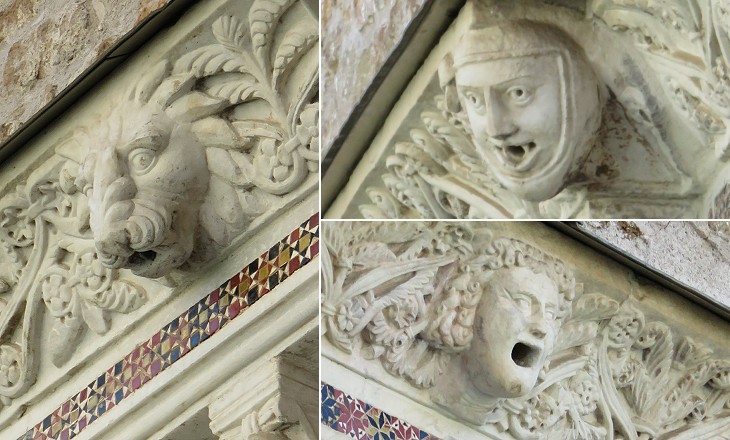 Details of the gargoyles

In the inscription shown in the icon of this page the word DOCT(us) indicates that the Vassalletto were proud of their knowledge of ancient art which permeates the design of the cloister. They did not employ statues, capitals, decorations, etc. taken from ancient monuments, although these were widely available, but they recreated them. The lion gargoyles were based on those of Hadrianeum, but here and there the Vassalletto placed some human heads which are typical of medieval buildings. 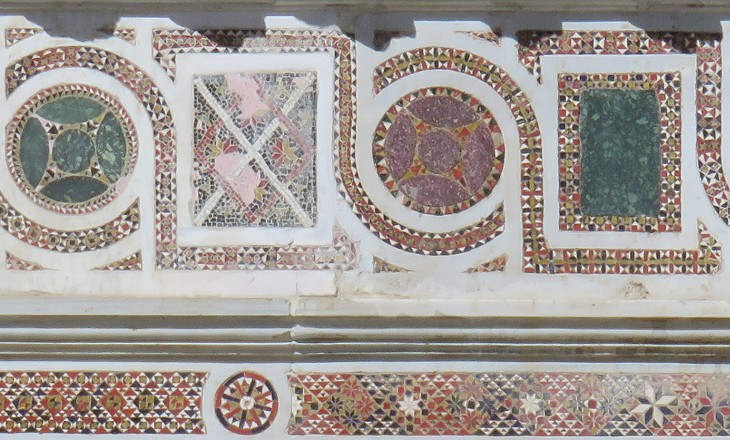 Detail of the mosaics of the main band

The main mosaic band which decorates the cloister was made up of very minute glass "tesserae" and larger pieces of white and green marbles and porphyry. The Vassalletto arranged the decoration of the band so that circles and squares are linked in a dynamic way. 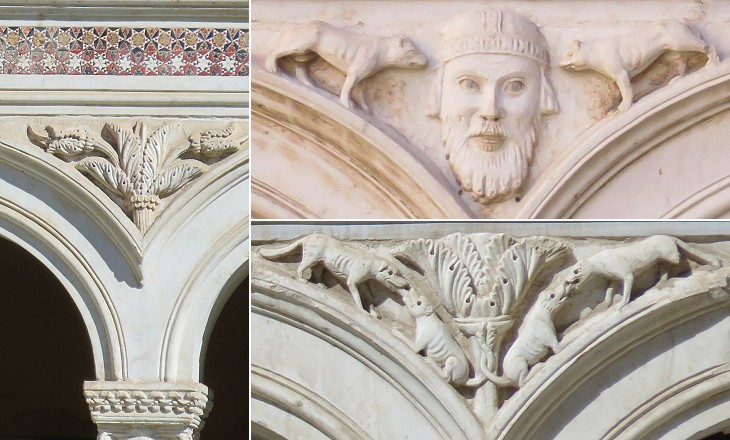 The Vassalletto placed reliefs in the small triangular spaces between two arches which is something unusual in the ancient monuments of Rome, because series of arches (apart from aqueducts) are typical of Byzantine monuments such as St. Simeon's Martyrion in Syria. The reliefs depict floral motifs together with more intriguing subjects which probably refer to popular medieval tales we no longer know of. 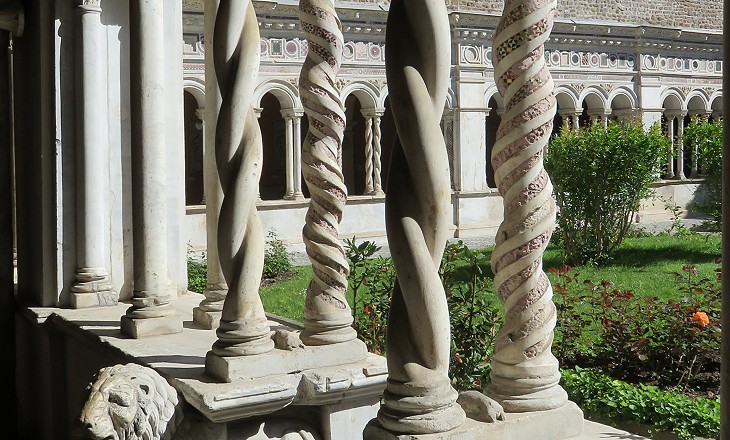 The Vassalletto departed from the canons of classic architecture by widely using Solomonic columns and columns twisted round each other like hawser. They must have developed a technology to make them. During the Renaissance such kind of columns were no longer in fashion, but they were popular again in the XVIIth century (you may wish to see the columns of Gian Lorenzo Bernini's Baldacchino in S. Pietro). 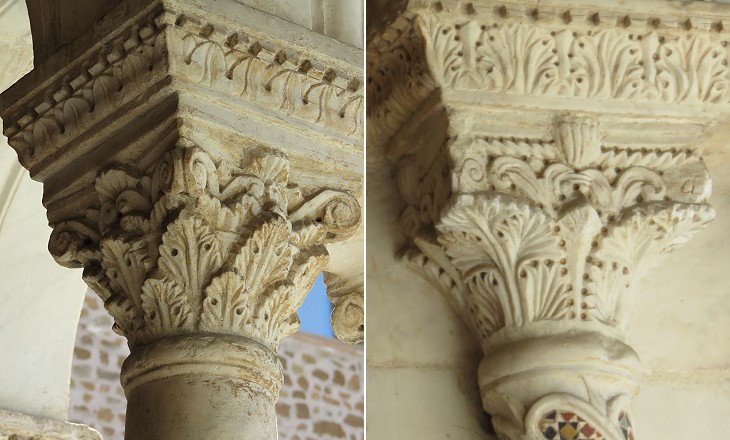 Capitals based on the Corinthian order

The Vassalletto designed a capital which is very close to the classic Corinthian one, but has features in the design of the leaves and in the use of the drill which prevailed in the Late Empire and in Byzantine buildings. The couples of capitals, although very similar, are never identical. The Vassalletto were so skilled that their Ionic capitals at S. Lorenzo fuori le Mura were believed to be the work of ancient sculptors by J. J. Winckelmann, the art historian who set the bases of Neoclassicism. 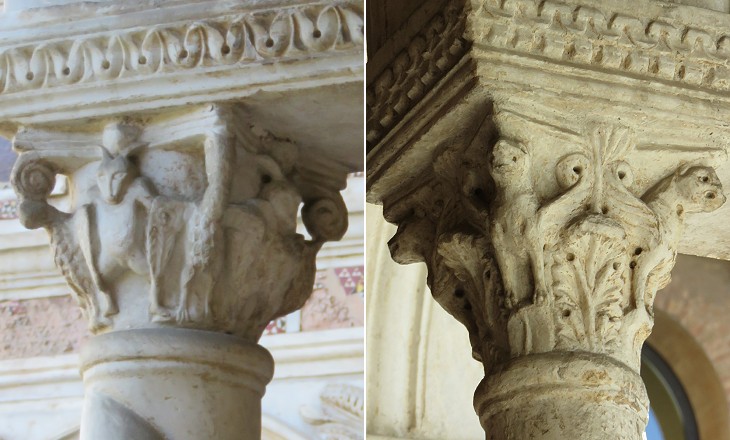 Only four couples of capitals are not based on the Corinthian order, but portray mythological figures. It is difficult to understand why the Vassalletto made this choice. Perhaps they complied with a precise request of the Canons who wanted to show that evil thoughts and behaviours were a constant threat. 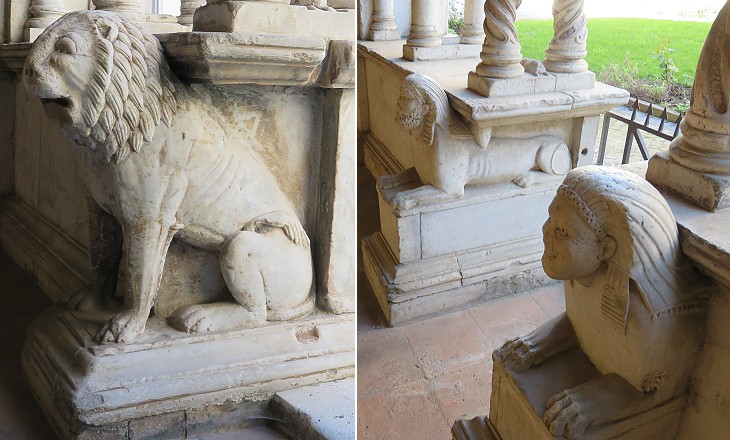 Lion and sphinxes decorating the entrance to the garden

Guardian lions were placed at the sides of the main entrance of many medieval churches (see the gigantic ones at Ancona and Verona). They were very often sculptured in a pretty rough way as those at SS. Apostoli. While the snout of the lion shown above is rather poor, the mane and the body are pretty well executed, bearing in mind that the Vassalletto did not have the opportunity of seeing an actual lion, but based their work on ancient statues and reliefs. 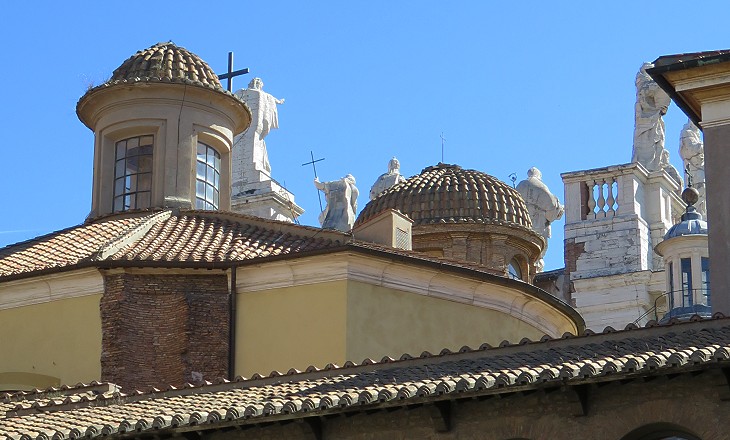 View towards the façade

Standing out in the cloister you may look up and see a section of the great façade of the church. The robed and mitred apostles, bleached and rain-washed by the ages, rose into the blue air like huge snow figures.
Henry James
Actually the statues do not portray the Apostles, but Doctors of the Church. The Apostles are at S. Pietro.
The image in the background of this page shows a detail of a column.

Move to page two to see the works of art housed in the cloister.

Other Days of Peace pages:
A Sunny Day in Villa Borghese
At the Flea Market
At the Beach
Voicing Your Views ..... and feeling better
Christmas in Rome
Eating Outdoors
Celebrating the Foundation of Rome
A visit to Roseto di Roma
The procession of La Madonna de Noantri
Running the Marathon
Watching the Parade
Finding Solace at the Protestant Cemetery
Attending 2007 July Events
Rome's Sleepless Night
Attending Winter Ceremonies
Jogging at Valle delle Camene
Sailing on the River to see the Bridges of Roma
An October Outing to Marino
A Special Spring Weekend
Embassy-hunting in Parioli
Attending a Funeral ...and enjoying it!
Celebrating Eritrean Michaelmas in Rome
Visiting Rome at Dawn
Visiting Rome in the Moonlight
Visiting Rome on a Hop-on-Hop-off Bus
Visiting Multi-ethnic Rome
Baroque Fireworks
Playing in the Snow at the Janiculum
Watching the Pride Parade
Reading Memoirs of Hadrian at Villa Adriana
Visiting the Movie Sets at Cinecittà
Looking up at the Ceilings of the Vatican Palaces
Reading Seneca at the Baths
Reading Ovid at St. Peter's
Walking the Dog at Valle della Caffarella
Keeping up with new discoveries at Museo Ninfeo