It was pleasant to wake up in Florence, to open the eyes upon a bright bare room, with a floor of red tiles which look clean though they are not; with a painted ceiling whereon pink griffins and blue amorini sport in a forest of yellow violins and bassoons. It was pleasant, too, to fling wide the windows, pinching the fingers in unfamiliar fastenings, to lean out into sunshine with beautiful hills and trees and marble churches opposite, and close below, the Arno, gurgling against the embankment of the road.
E. M. Forster - A Room With a View - Chapter II
Regardless whether you have or you have not been given a room with a view at Forster's Pensione Bertolini, Florence offers you a fortress with a view which is located right above Lungarno delle Grazie, the assumed location of Pensione Bertolini. 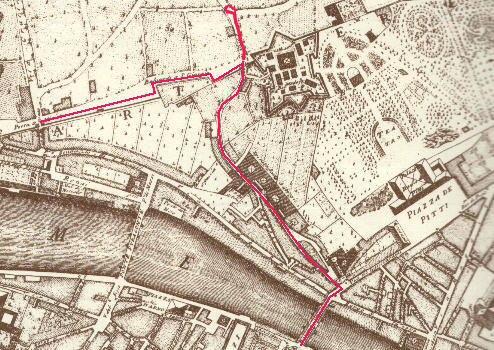 Detail of a 1731 Map: the red line shows the itinerary described in this page including a walk along Via di S. Leonardo

You will find yourself miles away from crowded Ponte Vecchio by climbing steep Costa S. Giorgio (you may wish to stop in S. Felicita - where the street begins - to see a Deposition by Pontormo). 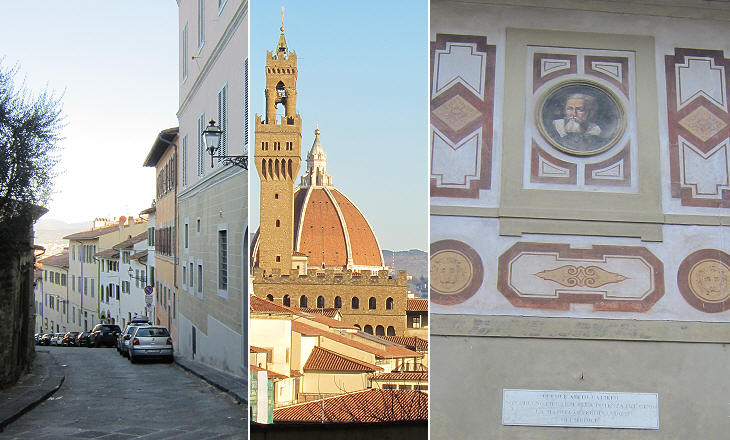 At the top of Costa S. Giorgio an inscription on an old house states that there lived Galileo Galilei, the Italian scientist who became four centuries after his death a key ingredient of Dan Brown's Spaghetti Bolognaise. 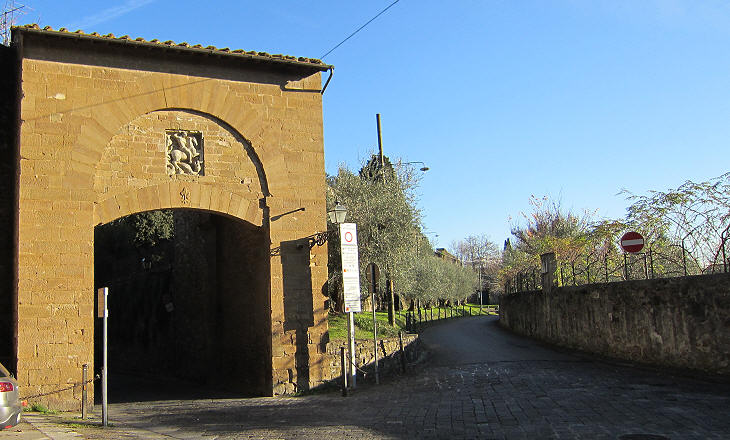 Porta S. Giorgio and the street along the walls leading to Porta S. Miniato

The street ends at one of the old gates of Florence; next to it there is the entrance to a late Renaissance fortress.

Fortezza di S. Giorgio or del Belvedere was for the Medici grand dukes what Castel Sant'Angelo was for the popes. In times of unrest they could escape into it from Boboli, the gardens of Palazzo Pitti, their usual residence. A passage similar to Passetto in Rome allowed them to reach Boboli even from Palazzo Vecchio which is located in the heart of Florence.

(left) Main entrance and Medici coat of arms; (centre) a ravelin of the fortress; (right) another entrance

Florence was protected by walls which were mainly built in the XIIIth century: in the late XVIth century they were not able to cope with the development of modern artillery. Grand Duke Ferdinand I (1587-1609), a former cardinal who had lived in Villa Medici realized that although he pursued a careful policy of amicable relations with both France and Spain, it was wiser to upgrade the fortifications of Florence.
Two state-of-the-art fortresses were built immediately outside the old walls: a large fortress was located in the plain, while a small one was erected on a hill above Palazzo Pitti; the large fortress became known as Fortezza da Basso (Lower Fortress) and the small one as Fortezza da Alto (Upper Fortress).
The former was meant to protect Florence from external enemies, while the latter had clearly the purpose to protect the grand dukes from their own subjects.

View of Florence: in the foreground: detail of a laid table by Mario Merz (1925-2003) having the same length as the diameter of the drum of the dome of S. Maria del Fiore

Both fortresses retained their military use for centuries: only in the 1960s did the Italian Army agree to withdraw from Fortezza da Alto and return it to the City of Florence. Because of its striking views over the monuments of Florence, the municipal administration felt it was a most appropriate location for open air exhibitions. The 1972 Henry Moore Exhibition showed that the site had a vocation for hosting modern art exhibitions. The image above was taken in 2003 during the Belvedere dell'Arte - Horizons, a contemporary art exhibition.

Fortezza da Alto was designed by Bernardo Buontalenti, an architect who was also an expert in scenography and fireworks. The fortress he designed had all the features required by military architecture, but Buontalenti did not miss the opportunity to provide his masters with a villa where they could entertain their guests.
The elegant small building he erected at the centre of the fortress was probably not appropriate from a military standpoint, as it was an easy target for the enemy artillery; it provided however the facilities and atmosphere of a Renaissance villa.

Today Fortezza da Alto is usually known as Fortezza del Belvedere (although its official name is Fortezza di S. Maria del Belvedere or Forte di S. Giorgio): it offers not only a very close view of the main monuments of Florence: it also commands a fine panorama over the low hills which surround the southern part of Florence. A careful town planning has preserved the typical rural aspect of the Tuscan countryside. 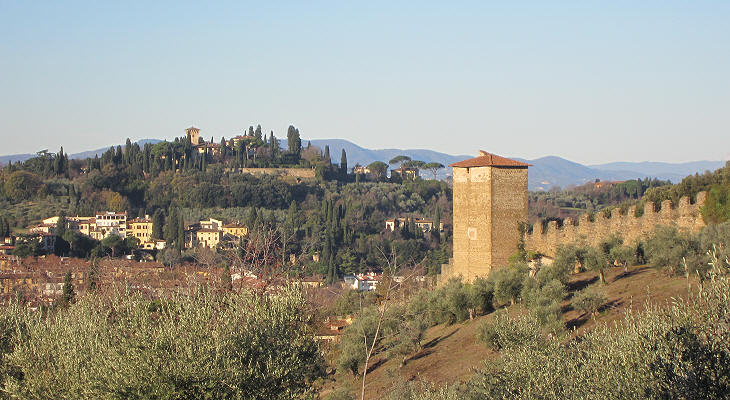 View of the hill to the south of Fortezza del Belvedere from Via di S. Leonardo

Most of the walls of Florence were pulled down and replaced with large alleys when Florence became for a short period (1865-70) the capital of the Kingdom of Italy. Surviving sections of the medieval walls are located near Fortezza del Belevedere and it is possible to delay a bit the return to the crowded city centre by following an almost countryside street along this remaining stretch of the walls. 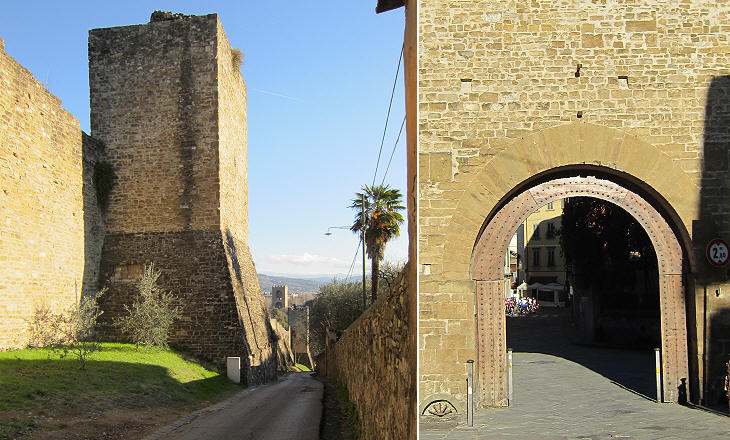 The image used as a background for this page shows a relief portraying St. George in Porta S. Giorgio. 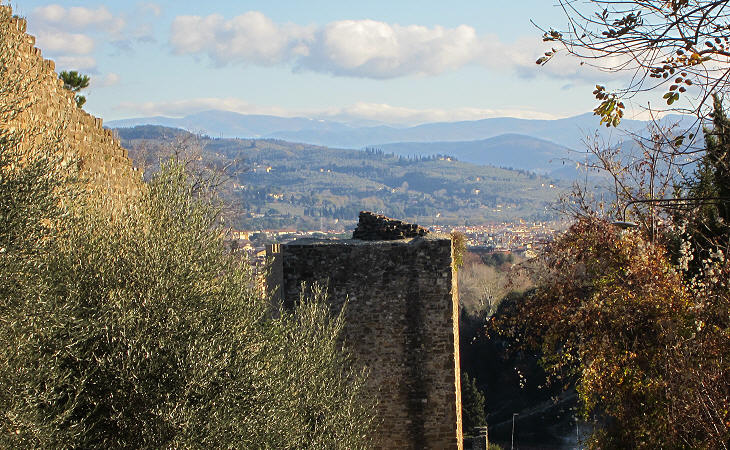 View from the walls between Porta S. Giorgio and Porta S. Miniato