- Remarks on "Angels and Demons"

The menus of nearly all Italian restaurants abroad offer Spaghetti Bolognaise, or Spaghetti Bolognese and (when the owner knows a bit of Italian) Spaghetti alla Bolognese.
With all its popularity abroad this dish does not belong to the Italian cooking tradition.
Spaghetti, a thinner kind of maccaroni are so described by J. W. Goethe (Naples, May 29, 1787): The macaroni, the dough of which is made from very fine flour, kneaded into various shapes and then boiled, can be bought everywhere and in all the shops for very little money. As a rule, it is simply cooked in water and seasoned with grated cheese. The diet of the inhabitants of Naples heavily relied on this simple and economic dish. The hard wheat grown in southern Italy was particularly apt for this kind of pasta.
Bologna, in addition to be called la dotta (the learned) is also known as la grassa (the fat) due to its rich cooking: the wheat grown in northern Italy is less suited for manufacturing spaghetti or maccaroni (which can be stored for a very long time), while it is excellent for pasta fresca, such as tagliatelle, lasagne, ravioli, tortellini and the likes which are all usually served with a rich meat-based sauce called ragù alla bolognese.
By combining the Neapolitan spaghetti with the Bolognese ragù you get Spaghetti alla Bolognese: they can taste very good, but they are not very representative of Italian cooking.
Dan Brown, before his most acclaimed novel The Da Vinci Code, wrote in 2000 an almost identical novel, Angels and Demons, which is set in Rome, rather than Paris: in a foreword note he states: References to all works of art, tombs, tunnels, and architecture in Rome are entirely factual (as are their exact locations).
In my view he cooked for his readers a very tasty Spaghetti Bolognaise-type novel, which here and there may lead them astray.

Much of the plot of Angels and Demons is about a XVIIth century scientific academy, Accademia degli Illuminati (enlightened); in the novel, today's academy members are seeking revenge on the Catholic Church for the persecutions members of the academy suffered in the past.
Galileo Galilei is quoted as having been a member of the academy and clues hidden in his writings guide Dan Brown's hero (a sort of Indiana Jones) through the churches of Rome.

A worn-out 1872 inscription in Palazzo Cesi sheds some light on Roman scientific academies:

Federico Cesi (1585-1630) founded the academy in 1603 when he was just 18 and he named it after the lynx, the animal with the reputation of having keen sight; so the metaphoric meaning of Illuminati (enlightened, a very popular term in the following century) is not so distant from the academy name chosen by Prince Cesi: they both deal with sight.
Members of the academy had different views on the Copernican theory, and Galilei's views supporting it were challenged by other academy members. The academy was under the patronage of Pope Urban VIII, whose nephew Cardinal Francesco Barberini was an academy member too.
The death of Prince Cesi marked the end of the academy he had founded. The aim of the academy and its name were resurrected several times in the following centuries.

Palazzo Corsini: coat of arms of Accademia dei Lincei, recent books published by the Academy, and staircase designed by Ferdinando Fuga which leads to the library

Currently Accademia (Nazionale) dei Lincei is housed in Palazzo Corsini and makes use of nearby la Farnesina for meetings and conferences. An Accademia degli Illuminati does exist in Rome, but its foundation is very recent and it smells of business, rather than science. 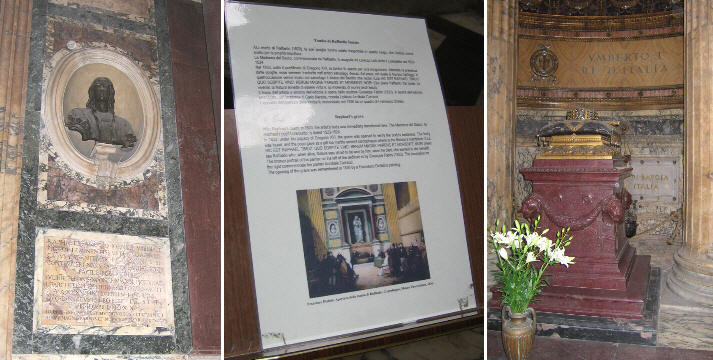 Pantheon: Bust of Raphael; visitors are informed that Raphael was buried there in 1520; Tomb of Umberto I, King of Italy

Much of the novel is about the four traditional components of the world: earth, air, fire and water. Unfortunately, in the novel, the heirs of the XVIIth century academy refer to these elements in a direct and gruesome way which could not be farther from the culture of the academy's first members. 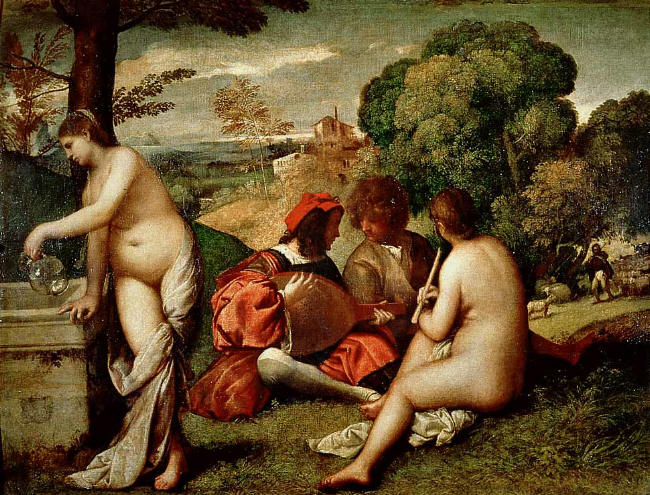 This painting is an excellent example of the indirect way the four elements were referred to by Renaissance artists.
The name given to the painting describes the immediate perception one has of what the portrayed characters are doing. But that perception is accompanied by another one, that there is something strange, mysterious in the apparently idyllic scene.
We ask ourselves why the woman on the right is naked: she is Earth and she directly sits on the ground as if she were part of it. The woman on the left does not seem very interested in what is going on: her aloofness is a reminder of the coldness of Water, which she is getting from a well. Of the two men, one has a very ruffled hair: in the quartet he represents Air; the other man plays a mandola: music is a creative art and Fire is the great creator. So the painting could very well be called The Four Elements and also The Four Seasons because Water with its coldness is a metaphor of Winter, Air is the breath of Spring, Fire the heat of Summer and Earth is Autumn, when the fields are naked. 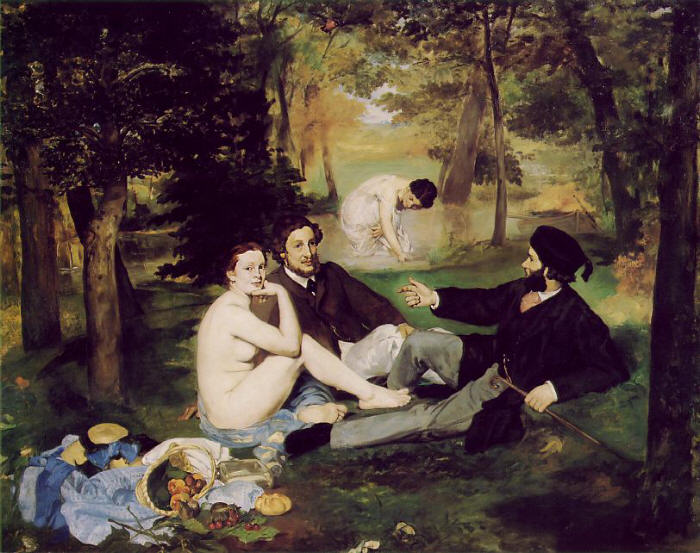 This famous painting by Manet was initially rejected by the Paris Salon mainly for the nakedness of the woman on the left: naked odalisques or slaves were often portrayed by academic painters, but the nakedness of this middle-class woman was a scandal. This painting too has hidden references to the four elements: the two women can be easily associated to those in the previous painting: a flying bird (top/centre) and a small fire (behind the boat) tell which man is Air and which is Fire.

A Few Other Remarks 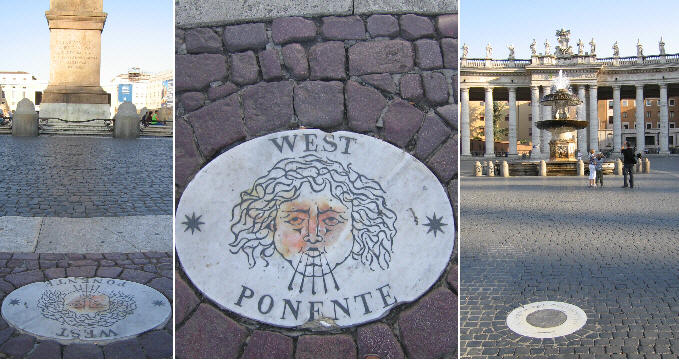 Piazza S. Pietro: inscription near the obelisk: porphyry slab marking one of the foci of the square

Let me say no more on the final 33 chapters in order not to disclose how the novel ends.

The two images used as a background for this page show the angel of Castel Sant'Angelo (chapter 107) and a marble inlay depicting a skeleton in Cappella Chigi in S. Maria del Popolo (Chapter 65).
In addition to the monuments/locations shown or having a link in this page, the following is a list of other monuments quoted in the book which you can find in this web site.
You can find:
Apostolic Palace (chapter 39)
Belvedere Courtyard (chapter 46)
Royal Staircase (chapter 47)
Habakkuk and the Angel in S. Maria del Popolo (chapter 70)
S. Maria della Vittoria (chapter 91)
Piazza Navona (chapter 102)
Ponte Sant'Angelo (chapter 106)
il Passetto (chapter 112)
Isola Tiberina (chapter 125)

I owe the following additional remarks on the conclave to the courtesy of Rev. Niels B. Johansen.