Chiesa di S. Tommaso in Parione
(Vasi at work in the Grand View of Rome)

Links to this page can be found in Book 6, Map C2, Day 4, View C6, Rione Parione and Rione Ponte. 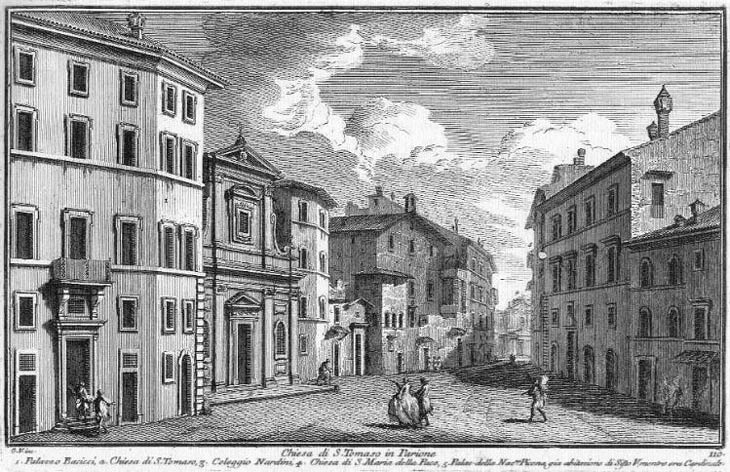 When Pope Martin V died in 1431 the estimated population of Rome was in the region of 30,000; a century later, just before the 1527 Sack of Rome, it had doubled; during this period Rione Ponte and Rione Parione were the heart of the city and their streets were bursting with all sorts of activities.
In 1756 when Giuseppe Vasi drew this etching the city centre had moved eastwards to Piazza Colonna and Via del Corso; Vasi greatly enlarged the narrow street leading to S. Maria della Pace in order to show each and any of the buildings on its two sides, but the very few people in the street are evidence of the loss of importance of the neighbourhood.
The view is taken from the green dot in the small 1748 map here below. In the description below the plate Vasi made reference to: 1) Palazzo Bacicci; 2) S. Tommaso; 3) Collegio Nardini; 4) S. Maria della Pace; 5) Palazzo della Nazione Picena. 4) is shown in detail in another page. The small map shows also 6) Palazzo del Governo Vecchio; 7) Piazza del Fico; 8) Palazzo Tanari; 9) Casa di Teodoro Amayden and Palazzetto Avila; 10) Palazzo di Monte Giordano; 11) Via del Montonaccio; 12) Palazzetto Turci. The dotted line in the map delineates the border between Rione Ponte (upper part) and Rione Parione (lower part). 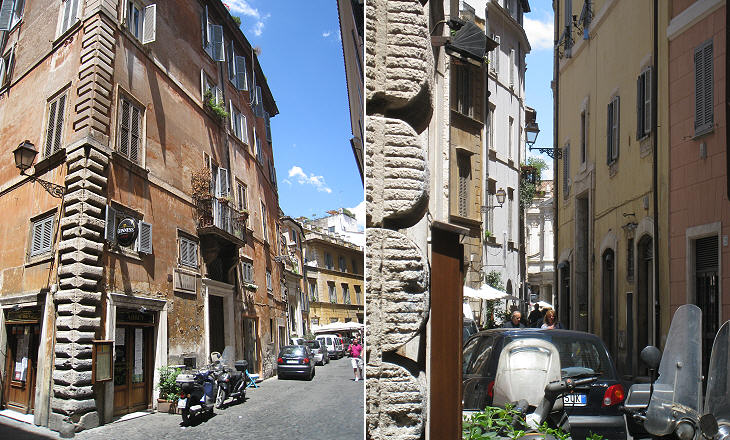 Only a few minor changes have occurred since the time of the etching; in order to catch a glimpse of S. Maria della Pace it is necessary to stay very near the corner of Palazzo Bacicci on Via del Governo Vecchio; the building is named after Giovan Battista Gaulli, known as il Baciccio, the painter of the illusionistic ceiling of il Gesù, who lived there and was buried in S. Tommaso in Parione. (left) S. Tommaso in Parione; (right) detail of the façade

According to records S. Tommaso in Parione was consecrated in 1139 and it was a minor church; on July 1, 1517 Pope Leo X created an unprecedented number of new cardinals (31); he therefore "promoted" S. Tommaso in Parione which became a titular church; the cardinals who were assigned the church however did not promote its restoration and embellishment. Eventually in 1582, Mario and Camillo Cerrini, two commoners, paid for a thorough reconstruction of the building; the new façade was designed by Francesco da Volterra. The image used as background for this page shows one the two lion heads which decorate its upper section; they are most likely a tribute to Pope Sixtus V, the reigning pope in 1585-1590 when the façade was completed (a lion was one of his heraldic symbols). The interior of the church was entirely modified in the XIXth century with the loss of all its old decoration and monuments (you may wish to see the building as it appeared in a 1588 Guide to Rome and learn more about the Cerrini).

(above) Lintel of Collegio Nardini which is located to the right of S. Tommaso in Parione; (below) lintel of Palazzo Nardini in Via del Governo Vecchio

Stefano Nardini covered several important positions at the Papal court in the second half of the XVth century and in particular during the pontificate of Pope Sixtus IV who appointed him cardinal in 1473. In view of the 1475 Jubilee Year he founded a college for the education of 24 priests and at the same time he built a family palace; the two buildings border on each other behind Palazzo Bacicci and S. Tommaso in Parione. 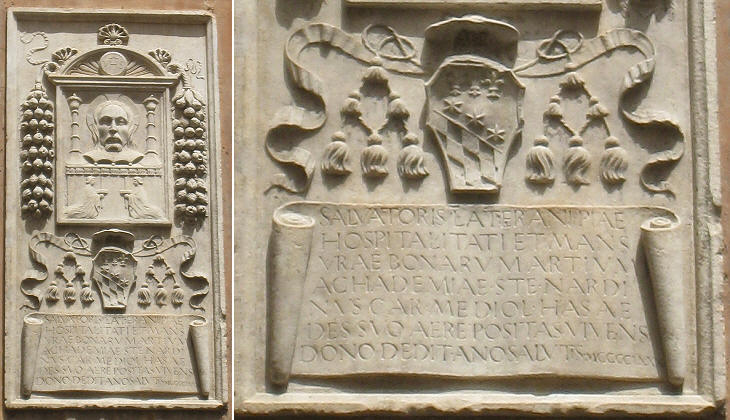 Inscription on Palazzo Nardini with the act of donation to Spedale di S. Giovanni in Laterano

Cardinal Nardini donated his palace to Spedale di S. Giovanni in Laterano; in 1624 Pope Urban VIII acquired the building to house the offices of Governatorato di Roma, the body in charge of policing the city and the palace became known as Palazzo del Governatore; after Pope Benedict XIV relocated these offices to Palazzo Madama in 1755, vecchio (old) was added to the name of the palace; eventually it became known as Palazzo del Governo Vecchio. The section of Strada Papale between Piazza di Pasquino and Piazza dell'Orologio is named after the palace. Strada Papale was the street by which the Pope reached S. Giovanni in Laterano from S. Pietro to take possession of his diocese; you may wish to see a page covering this procession.
The palace was used as a tribunal until 1964 when it was closed and left empty; it became famous in 1976 when it was occupied by feminist activists; the occupation lasted several years; eventually the feminist groups were given Conservatorio della SS. Croce (Buon Pastore) for their activities. The future use of the decaying building is debated. 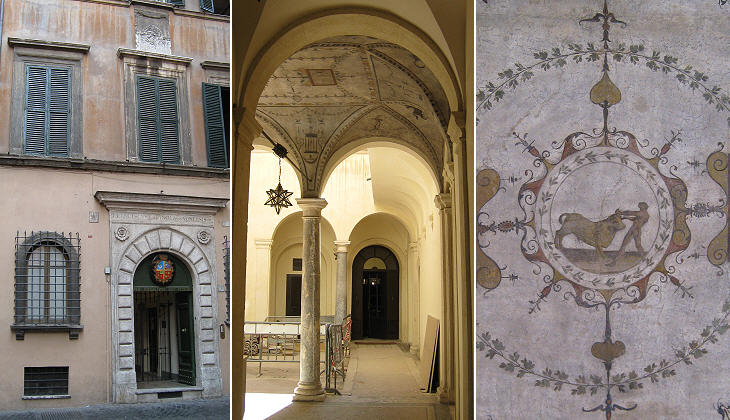 The palace was most likely built for Amanieu d'Albret, brother-in-law of Cesare Borgia, son of Pope Alexander VI, who was created cardinal in 1500; he lived only a short time there because he had to leave Rome after the election of Pope Julius II in 1503 who was a fierce enemy of the Borgia and he never returned to Rome. 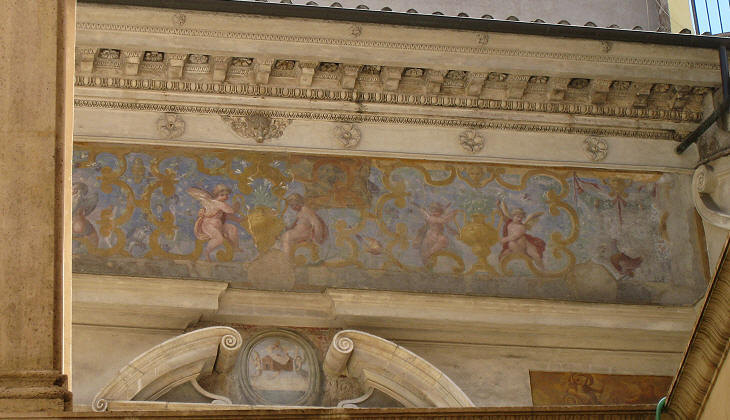 Decoration of the pensive garden

The palace was acquired by the Orsini who added a pensive garden; its walls are decorated with an elegant cornice which is based on their heraldic symbols: roses and bear heads; the walls are painted with lively frescoes by Cesare Arbasia, a Mannerist painter.
In 1645 the palace was bought by the brotherhood of the inhabitants of Piceno, a region of ancient Italy corresponding to the southern part of the Marches. They most likely bought it in the belief that Pope Sixtus V, who was born near Ascoli Piceno had lived there. Recent research found out that actually only a niece of the Pope lived in the building. The brotherhood bought also S. Salvatore in Lauro, a church not far away. A number of streets and squares of Rome were named after trees (e.g. Via della Vite - grape vine); in general the trees do not exist any longer, but Piazza del Fico, a small square crossed by the border between Rione Parione and Rione Ponte, retains a fig tree, although not the one which gave it the name; in summer its shadow helps the concentration of chess players. 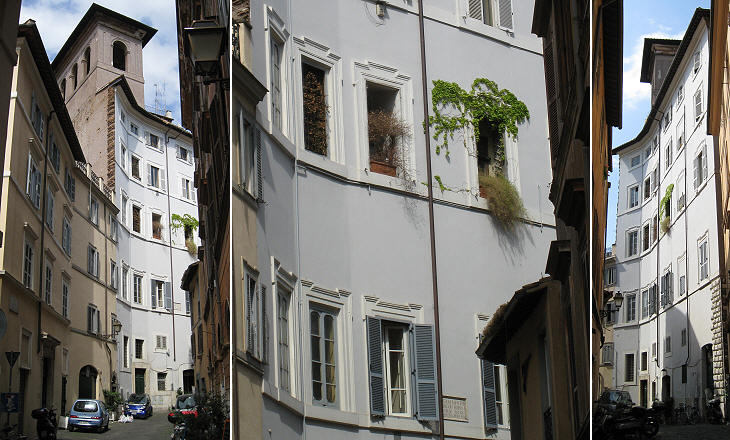 Many narrow streets near Piazza del Fico are known only to those who live there; they retain interesting buildings of the XVIth and XVIIth centuries.
Palazzo Tanari was built in the XVIIth century and it is named after Cardinal Sebastiano Antonio Tanari (1650-1724). He was a likely candidate to be elected Pope in 1724, but he fell seriously ill while he was participating in the conclave (which eventually elected Pope Benedict XIII); he was rushed home where he passed away a few days later. The palace has a high loggia with a very fine view (you may wish to see a page on this topic). The high number of windows indicates that at one point it was split into flats for rent. 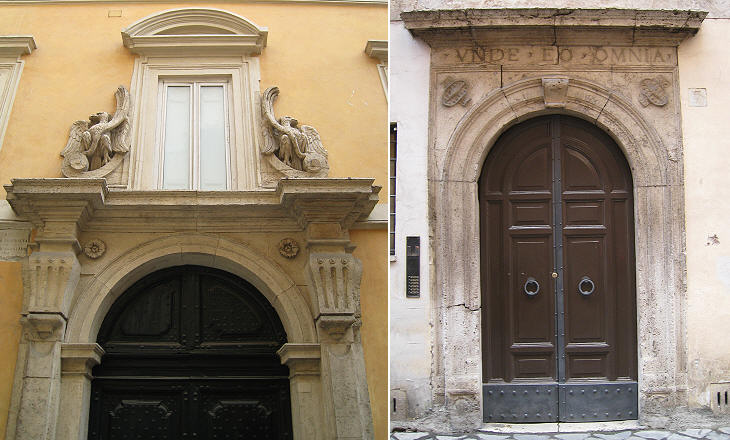 Palazzetto Avila is another XVIIth century building; it belonged to a family of Spanish origin (Avila in Castile is the birthplace of St. Teresa of Jesus); the portal is decorated with the heraldic symbols of the family: an eagle bearing a palm branch. In 1680 the Avila commissioned the design of their family chapel at S. Maria in Trastevere to Antonio Gherardi.
An adjoining Renaissance house is erroneously named after Teodoro Amayden, a Flemish lawyer who settled in Rome towards the end of the XVIth century and who wrote a widely known treatise on the Roman noble families; similar to other Renaissance houses in nearby Via dei Coronari and in Rione Borgo, the lintel bears a moral inscription: Unde Eo Omnia (All things return from where they came). 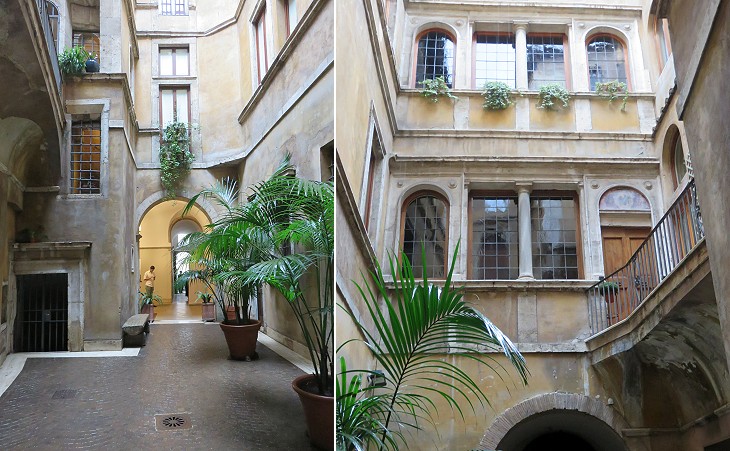 (left) Main entrance; (right) fountain by Felice Antonio Casoni in the courtyard; (inset) one of the two Orsini bears which originally gushed water into the fountain (as shown in an old print - it opens in another window)

The "mount" quoted by Dante is a mound from which it was possible to control the passage of pilgrims to and from the Vatican; it was fortified by the Orsini in the late XIIIth century and it was named after Giordano Orsini .
What today is known as Palazzo di Monte Giordano is actually made up of five different buildings; it included SS. Simone e Giuda, a church which had a direct entrance in Via dei Coronari. The Orsini sold the whole property in 1688, but their heraldic symbols are still visible in the main courtyard and in the decoration of the complex. 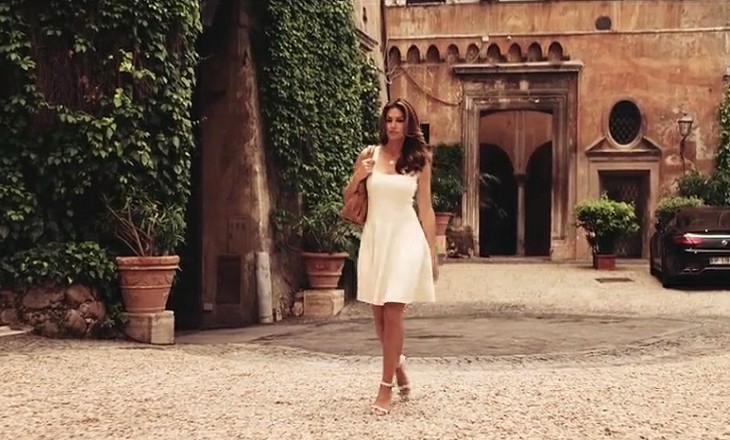 Giordano Orsini was a nephew of Pope Nicholas III, to whom Dante reproached having favoured his relatives by assigning them Soriano and other towns. Today the palace is usually known as Palazzo Taverna, after Count Rinaldo Taverna, of a noble family from Milan, who bought it in 1888.
The long rear courtyard can be mistaken for a street of Rome during the few seconds of a TV commercial. 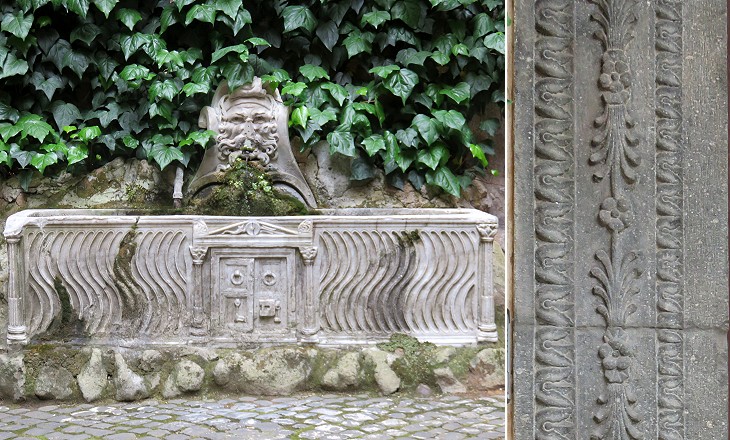 Rear courtyard: (left) ancient "strigilato" sarcophagus used as the basin for a fountain (as in other Roman palaces); (right) frame of a door with the Orsini five petaled roses 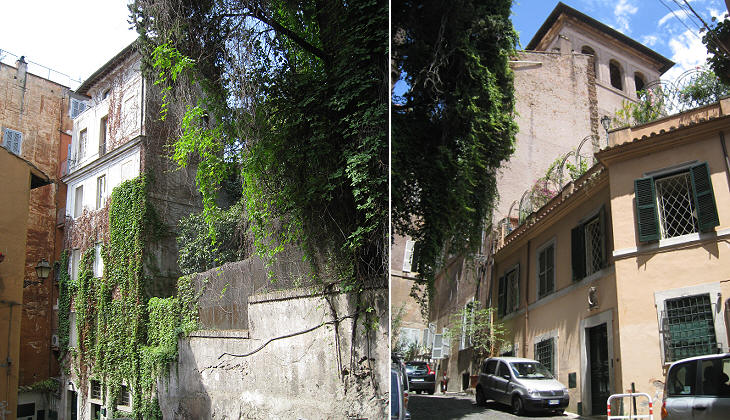 A short dead end alley separates Palazzo di Monte Giordano from Palazzo Tanari. It is a silent street which offers a peaceful haven in the very centre of Rome. 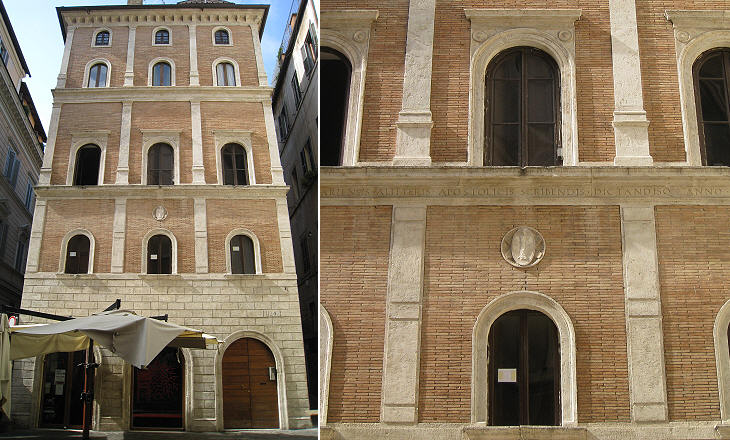 Palazzetto Turci in Via del Governo Vecchio is a fine Renaissance house which was attributed to Donato Bramante, because its design is similar (although at a much smaller scale) to nearby Palazzo della Cancelleria which was (wrongly) attributed to Bramante. It was built in the year 1500 by Pietro Turci, a member of the Papal court in charge of the correspondence; it must have been a very well paid job as it allowed Turci to build his house along what was the most important street of Rome at that time. 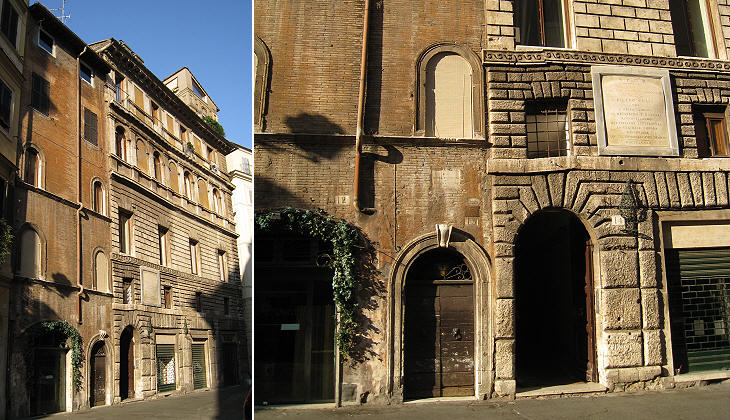 Houses of the XVth century with space between the windows for paintings (left) and of the XVIth century (right, you can read its plaque in another page) in Via del Governo Vecchio