Palazzo Madama
(Vasi at work in the Grand View of Rome)

Links to this page can be found in Book 4, Map C2, Day 4, View C6 and Rione Sant'Eustachio. 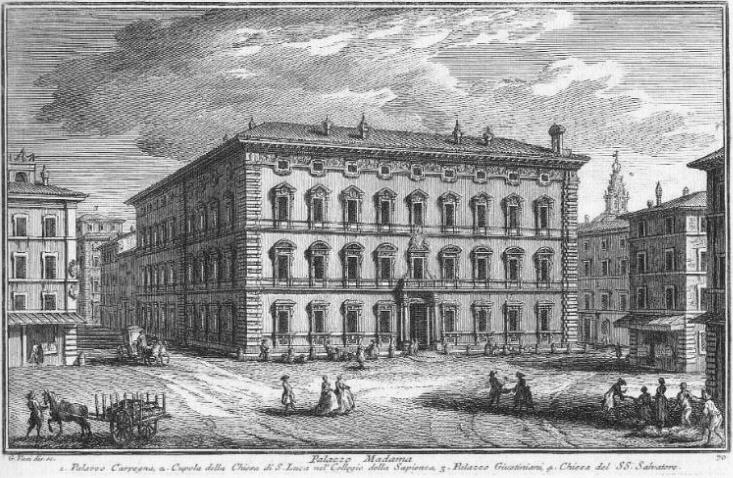 In 1754, when Giuseppe Vasi published this etching, the neighbourhood around Palazzo Madama was an open air marketplace. Piazza Navona housed the fruit and vegetable market, Piazza della Rotonda the meat market and Piazza Crescenzi the poultry one. The small square in front of Palazzo Madama, very near Piazza Navona, was the location where wine was sold. The cart on the left corner of the etching carries small casks and wine sellers with their casks are shown along the façade of the palace.
The view is taken from the green dot in the small 1748 map here below. In the description below the plate Vasi made reference to: 1) Palazzo Carpegna; 2) Spire of S. Luca (S. Ivo) alla Sapienza; 3) Palazzo Giustiniani; 4) Chiesa del SS. Salvatore. 2) and 3) are shown in other pages. The small map shows also 5) Palazzo Madama. The dotted line in the map delineates the border between Rione Parione (left) and Rione Sant'Eustachio (right). 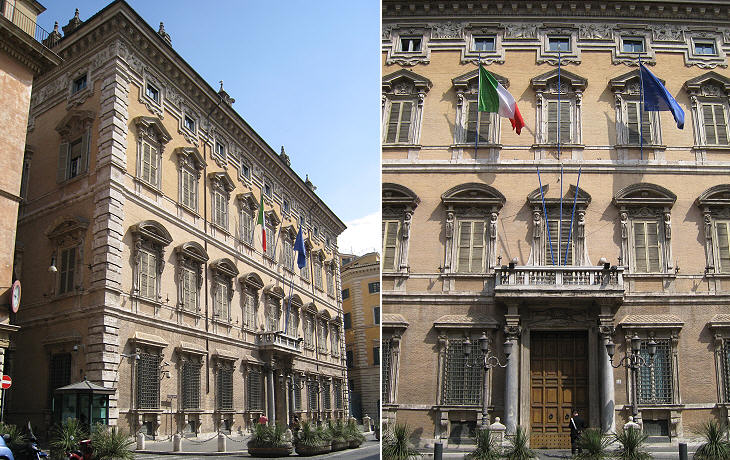 In 1871 Palazzo Madama was chosen to house the Senate of the Kingdom of Italy (and after 1946 of the Italian Republic). In order to provide this institution with appropriate facilities, the palace was enlarged at various steps and the small church of SS. Salvatore was demolished, but the façade was not affected by these changes; in 1936-1938 the building which is shown on the right side of the etching was pulled down to enlarge the street (see image towards the end of this page).
The full name of the church was SS. Salvatore in thermis, but because the building was very small it was known as il Salvatorello; the reference in thermis was due to Thermae Alexandrinae, public baths built by Emperor Nero and restored by Emperor Alexander Severus. They occupied the area upon which Palazzo Madama was built. Some decorative elements and paintings of the church were relocated to nearby S. Luigi dei Francesi and Palazzo di S. Luigi. 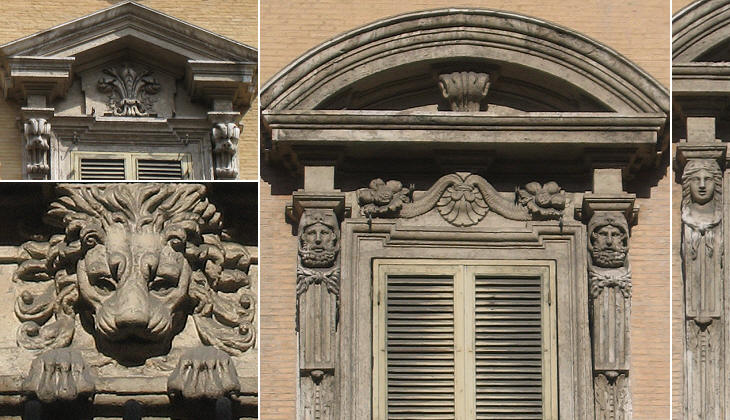 Details of the decoration of the windows with heraldic symbols (lily and lion) of Florence. Some of them portray Hercules wearing a lion's skin and are shown in the image used as background for this page

Palazzo Madama owes its name to Margaret of Parma (1522-1586), illegitimate daughter of Emperor Charles V, who acquired the life tenancy of this palace after the death of her husband Alessandro de' Medici, whose family owned the building. Margaret was called Madama perhaps because she had too many titles; when Charles V recognized her he named her Margaret of Austria; at the age of eleven she married Alessandro de' Medici and she became Duchess of Florence. At fifteen years of age she was already a widow, because her husband was killed by a distant cousin; she was then almost forced to marry Ottavio Farnese, grandson of Pope Paul III, who in 1547 became Duke of Parma and Piacenza (but he managed to actually acquire the duchy only some years later). In 1559 Margaret was appointed governor of the Low Countries, a post she held for eight years, and which was held by her son Alessandro Farnese in 1578-1592.
Margaret returned to Italy, but not to Parma; she lived in her Roman palace, in Villa Madama, in her fiefdom of Castel Madama or in Abruzzo, the region east of Latium which was a Spanish possession and where she was appointed governor of L'Aquila. Palazzo Madama returned to the Medici after the death of Margaret. 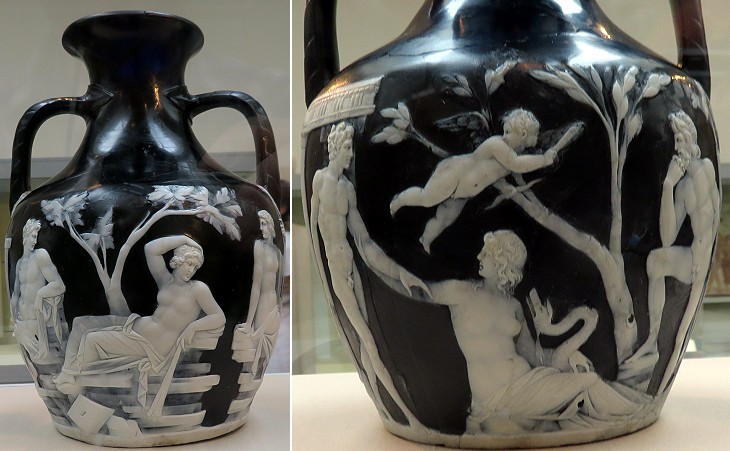 British Museum: Portland Vase (you may wish to see a similar vase from Pompeii)

In 1603 the palace was assigned to Cardinal Francesco Maria Del Monte, a close friend of Cardinal Ferdinando de' Medici who had become Grand Duke of Tuscany in 1587. Cardinal Del Monte was a patron of the arts (he is best known for having bought some of the first works by Michelangelo Merisi da Caravaggio) and a collector of antiquities. A description of his collection includes this vase and says it was found at Monte del Grano, along Via Tuscolana, the assumed mausoleum of Emperor Alexander Severus. The vase was bought by Cardinal Antonio Barberini, nephew of Pope Urban VIII in ca 1626. The Barberini sold it in ca 1780 and in 1784 it entered the collection of the Duchess of Portland. 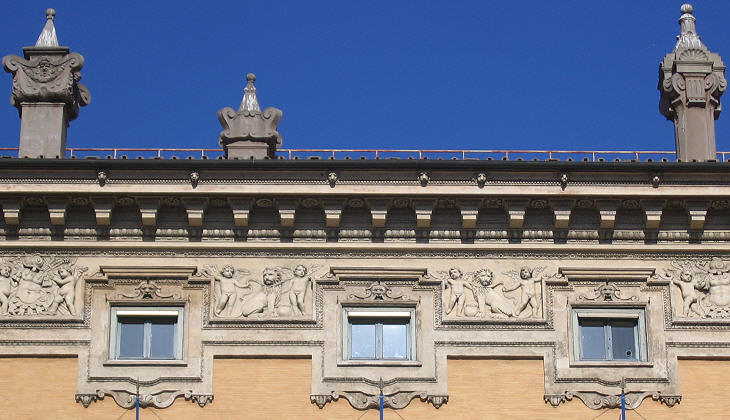 Details of the cornice

At the time of Margaret of Parma Palazzo Madama was a complex of buildings of different sizes and shapes, which were bought by Cardinal Giovanni de' Medici (the future Pope Leo X) in the early XVIth century; he and his family had other properties (Palazzo Medici Lante) in the same neighbourhood.
In 1637 the Medici commissioned Paolo Marucelli a restructuring of their property. The choice of this minor architect, rather than Gian Lorenzo Bernini or Francesco Borromini, led to the design of a façade which is quite different from the patterns which were prevailing in Rome at that time: its structure is that of a XVIth century palace and its decoration is regarded as more suited to a villa than to a city palace; critics were puzzled by the references to Hercules and by the size of the cornice. 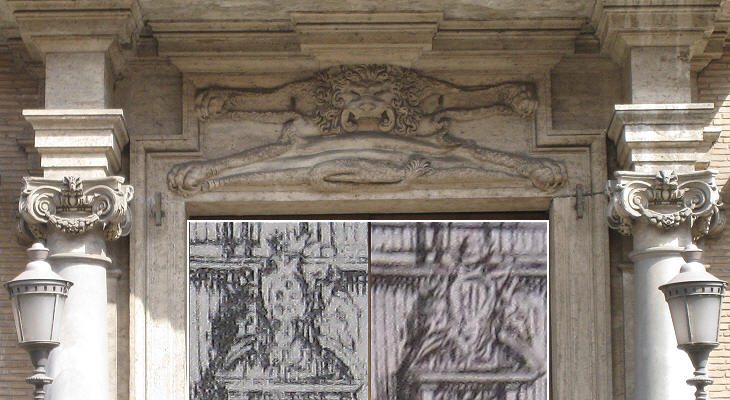 Relief above the entrance showing a lion's skin, a reference to Hercules; (inset) details of the etching by Giuseppe Vasi showing the coats of arms of the Medici family (left-1754 edition) and of Pope Benedict XIV (right-later edition)

Palazzo Madama became the Embassy of the Grand Duchy of Tuscany to the Papal State. In 1755 Pope Benedict XIV bought the palace to relocate there the office of Governatore di Roma (a sort of Chief Police Officer), previously in Palazzo Nardini and the coat of arms of the Medici was replaced by that of the Pope. Vasi retouched his etching to reflect the change. The Embassy of the Grand Duchy was moved to Palazzo di Fiorenza. 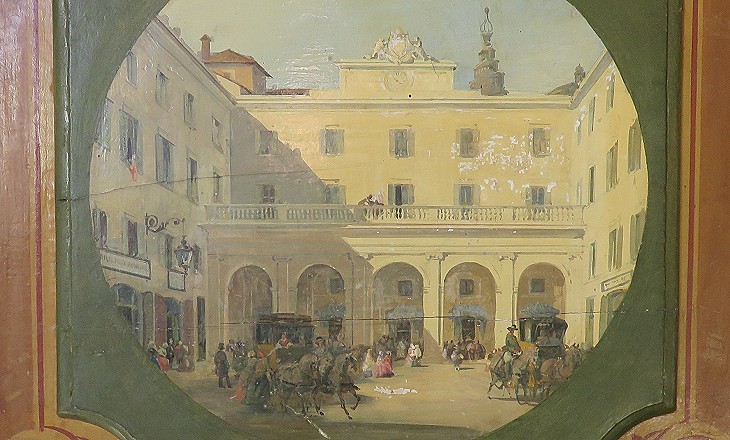 In 1849 Pope Pius IX relocated the Central Post Office from Palazzo del Vicegerente to Palazzo Madama. The change led to an enlargement and redesign of the rear courtyard of the palace. 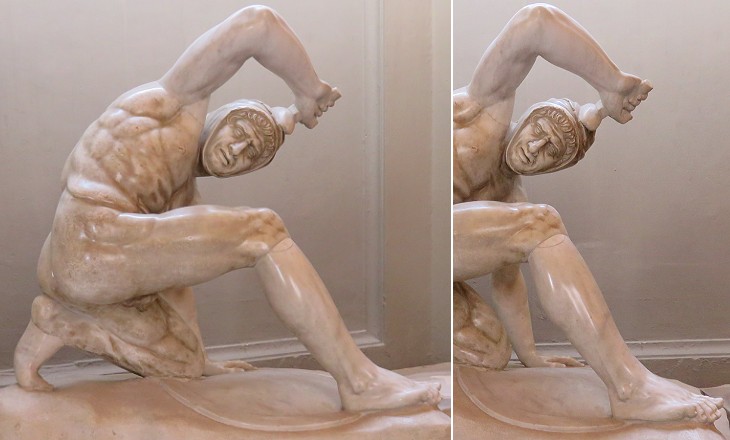 Musei Vaticani: The Persian Warrior, a IInd century AD copy of a (lost) bronze statue made for Attalus I, King of Pergamum. It was found in the early XVIth century during the construction of Palazzo Madama. You may wish to see two other copies of statues made for Attalus I: the Dying Galatian at Musei Capitolini and the Ludovisi Gaul at Museo Nazionale Romano 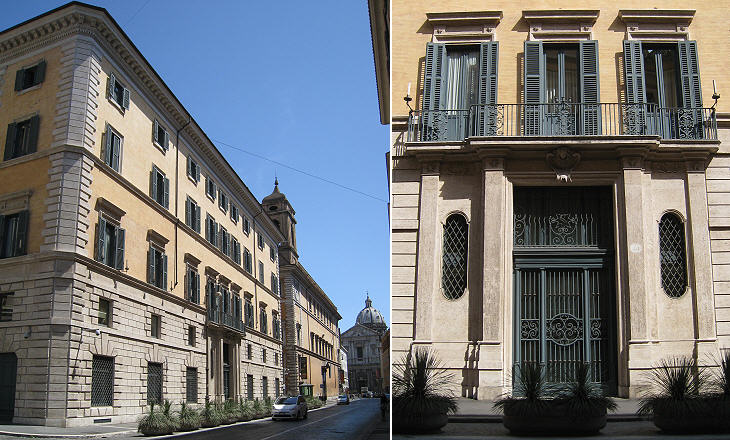 Palazzo Carpegna was originally built towards the end of the XVIIth century and it is generally attributed to Giovanni Antonio De Rossi. The Carpegna had another palace in Rione Trevi and a villa outside Porta Pertusa.
In 1919 Palazzo Carpegna was acquired by the Italian State and initially it was used as an addition to the University which was housed in Archiginnasio della Sapienza; when this institution was relocated outside the walls of Rome Palazzo Carpegna was demolished and rebuilt (1936-1938) in a slightly forward position to expand the facilities of the Senate. 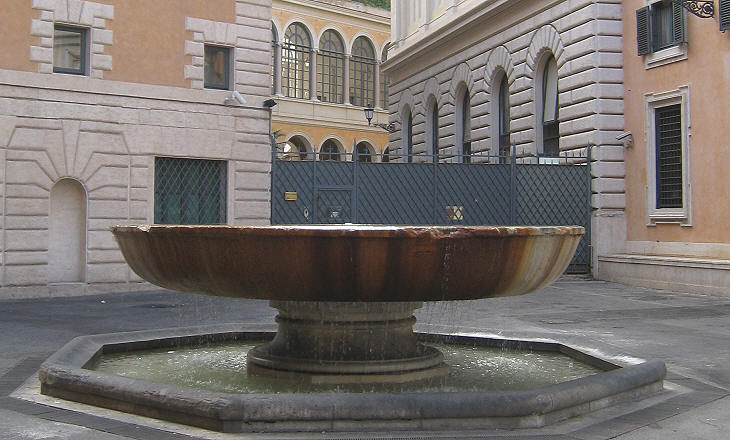 Excavations made in the courtyard of Palazzo Madama led to discovering a large granite basin of the ancient baths. In 1987 it was placed in a small square behind Palazzo Carpegna.