Piazza Crescenzi
(Vasi at work in the Grand View of Rome)

Links to this page can be found in Book 2 and Rione Sant'Eustachio. 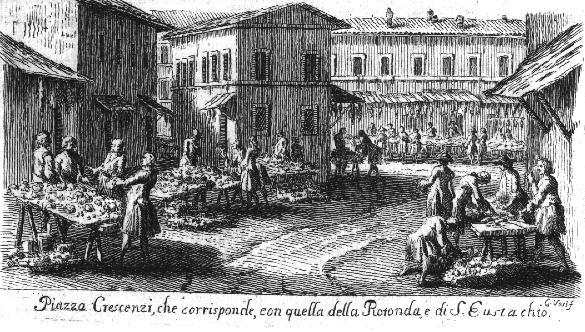 XVIIIth century Rome did not have an indoor market hall; fish was sold at Piazza di Pescaria, fruit and vegetables at Piazza Navona; wine at Piazza Madama; meat at Piazza della Rotonda, but market stands protected by small canopies were placed also in the streets between these two latter squares. Piazza Crescenzi housed the poultry market (as shown in the detail of the plate used as background for this page). This small 1752 etching by Giuseppe Vasi does not show women involved either in selling or buying.
The view is taken from the green dot in the 1748 map here below which shows: 1) Piazza Navona; 2) Piazza della Rotonda; 3) S. Eustachio; 4) Palazzo Crescenzi; 5) Palazzo Melchiorri. 1), 2) and 3) are shown in more detail in other pages. In 1939 the small detached house shown in the etching was pulled down; Piazza Crescenzi (now Via di S. Eustachio) does not house the poultry market any longer, but it is one of the few locations in central Rome where parking is allowed. Two ancient granite columns which were found in 1934 near Palazzo Madama were re-erected along the side of S. Eustachio; they belonged to baths built by Emperor Nero and restored by Emperor Alexander Severus. 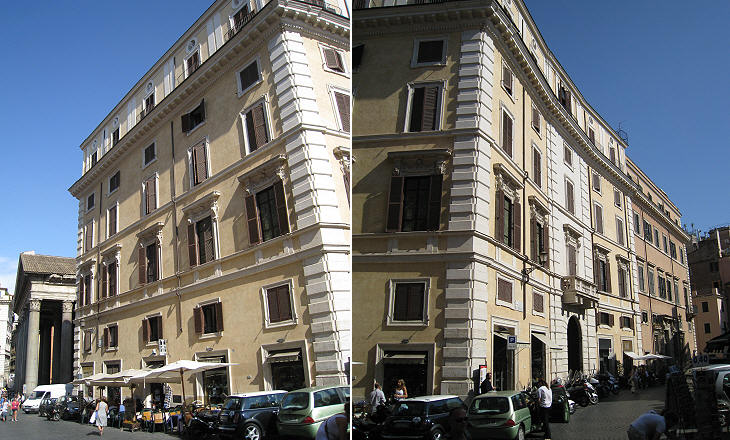 Palazzo Crescenzi was designed in the early XVIIth century; it was almost halved in 1882 to enlarge the street along the Pantheon and the entrance to the palace was relocated to Piazza Crescenzi; also adjoining Palazzo Melchiorri was reduced in size, but its entrance was already in this square. 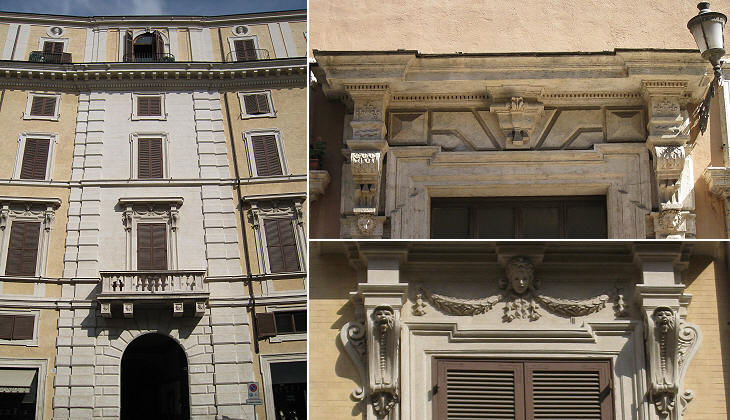 The Crescenzi played a key role in the election of many medieval popes, but by the time Cardinal Pier Paolo Crescenzi built this palace their importance was very much reduced. Eventually the possessions of the Crescenzi were inherited by the Serlupi, so this palace and another one in Rione Colonna are known as Palazzi Serlupi Crescenzi. The Melchiorri (from Recanati) became a noble family in 1585 when they acquired the fiefdom of Torrita from the Orsini which they sold to the Torlonia in the XIXth century.

Next plate in Book 2: Piazza Navona.
Next step in tour of Rione Sant'Eustachio: Piazza della Rotonda.