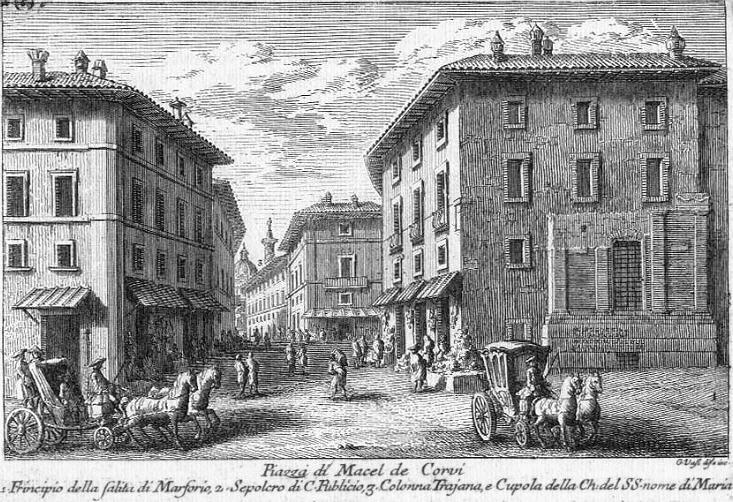 In 1752 Giuseppe Vasi included the slight widening of a street in his second book of etchings which was meant to show the "Main Squares with Obelisks, Columns and other Embellishments". Maybe he was puzzled by the name of the site and he wanted to show his erudition by reporting some of the explanations for it.
Macel de' Corvi literally means Slaughterhouse of the Ravens; according to Vasi, during the siege of Rome laid by the Gauls in 390 BC, a raven (Lat. corvus) helped a Roman warrior in a fight with a Gaul; in memory of his unexpected ally, the warrior added Corvinus to his name and he wanted to be portrayed in a statue with a raven on his helm in the location where the fight took place. The reference to the slaughterhouse was most likely due to the meat which was sold in the shops of this neighbourhood.
The view is taken from the green dot in the 1748 map here below. In the description below the plate Vasi made reference to: 1) Salita di Marforio. This street linked Piazza Venezia with the top of Campidoglio; Marforio, a talking statue, stood there until 1595 when it was moved to Piazza del Campidoglio; 2) Tomb of Caio Publicio Bibulo; 3) Colonna Trajana and Dome of SS. Nome di Maria. 3) is shown in more detail in another page. The small map shows also 4) Piazza di Macel de' Corvi. The dotted line in the small map delineates the borders between Rione Pigna (upper left quarter), Rione Trevi (upper right quarter), Rione Campitelli (lower left quarter) and Rione Monti (lower right quarter). 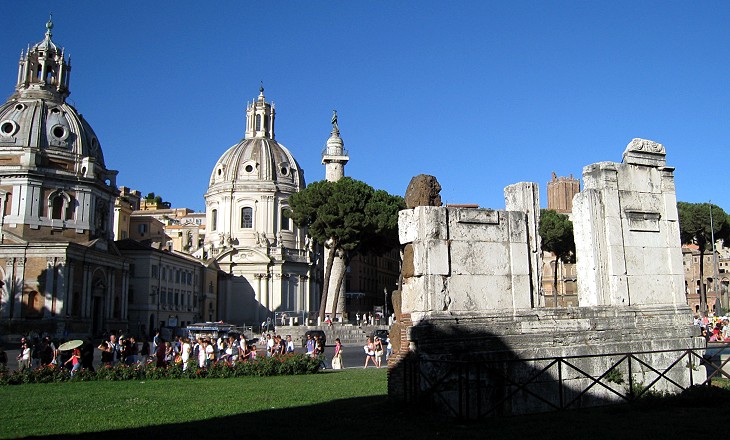 Macel de' Corvi does not exist any longer and now Colonna Trajana and SS. Nome di Maria are in full view. The construction of Monumento a Vittorio Emanuele II (late XIXth century) and the opening of Via dei Fori Imperiali, a large avenue leading to Colosseo (1932) required a toll to be paid and this neighbourhood which did not have famous churches and palaces was completely pulled down, with the sole exception of the tomb of Caio Publicio Bibulo. 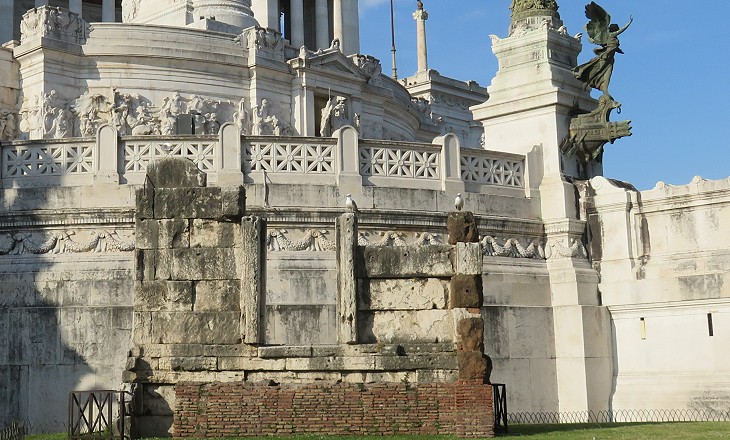 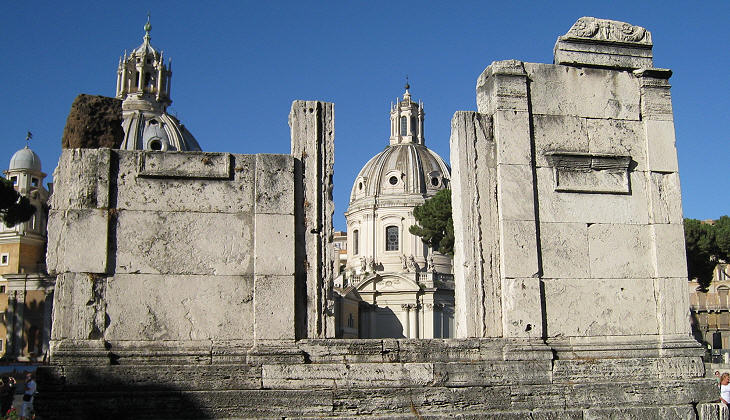 Remaining side of the tomb of Caio Publicio Bibulo; it is thought that what today seems a window was originally a niche housing a statue of Bibulo

Ancient Romans were not allowed to be buried inside the walls and the tomb of Caio Publicio Bibulo seems to contradict this statement, yet when the monument was erected (Ist century BC), the area at the foot of Campidoglio was not included in the pomerium, the sacred boundary of the City of Rome. It probably stood outside Porta Fontinalis, a lost Roman gate at the end of Clivus Argentarius, probably near the shop of C. Julius Helius, a shoemaker who is mentioned in a very interesting stela.

says that the monument was paid for by the Senate in recognition of the services provided by Caio Publicio Bibulo; in the lack of other historic references to him, the decision by the Senate is rather puzzling because "Aedile of the People", the only office held by Caio Publicio Bibulo, was a minor one in the political structure of the Roman Republic. The inscription was repeated on all four sides of the monument, the use of which was granted to Bibulo's heirs forever.
The image used as background for this page is based on a 1756 etching by Giovan Battista Piranesi.