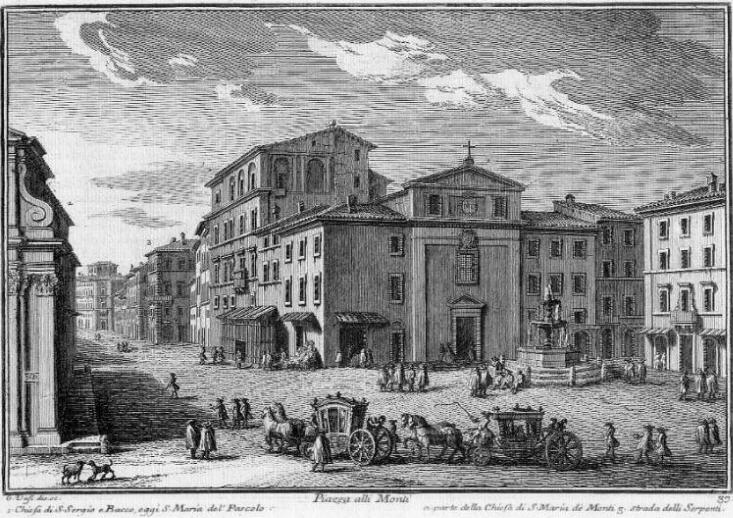 During the XVIIIth century Rome experienced a growth of its population, although lower than that of other European cities; this development led to the urbanisation of areas inside the city walls which had become almost rural after the fall of the Roman Empire.
By 1752 (when Giuseppe Vasi drew this etching) the area around Piazza alli Monti (today Piazza di S. Maria ai Monti) had turned into a middle class neighbourhood with many buildings having some luxury pretensions. According to Vasi, Via dei Serpenti, its main street, was named after a house which had a balcony supported by stucco statues of snakes; other old guidebooks talk of a (lost) fresco depicting the statue of Laocoon and his two sons in the coils of the snakes sent by Apollo, but most likely the name is due to the dice snakes that lived in the area before its urban development. Nearby streets have names which confirm this opinion: Via del Boschetto (small wood), Via del Sambuco (elder), Via Caprareccia (of the goats), Via delle Frasche (tree branches).
The view is taken from the green dot in the 1748 map here below. In the description below the plate Vasi made reference to: 1) Chiesa dei SS. Sergio e Bacco; 2) S. Maria ai Monti; 3) Via dei Serpenti. 2) is shown in another page. The small map shows also 4) Cappella di S. Giuseppe Benedetto Labre; 5) Casa Stefanoni; 6) Piazza degli Zingari; 7) S. Salvatore ad tres images. 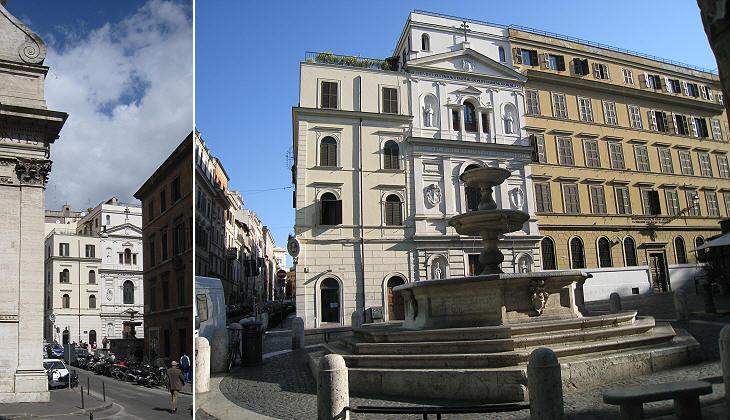 In the plate Vasi ignored a building on the southern side of Piazza alli Monti which impairs the view of the square from nearby S. Maria ai Monti. In the late XIXth century the façade of SS. Sergio e Bacco was modified and the buildings at its sides were enlarged; the shape of the square however is still that shown in the plate; today the neighbourhood is very lively with many restaurants, small hotels, music clubs and specialized shops. 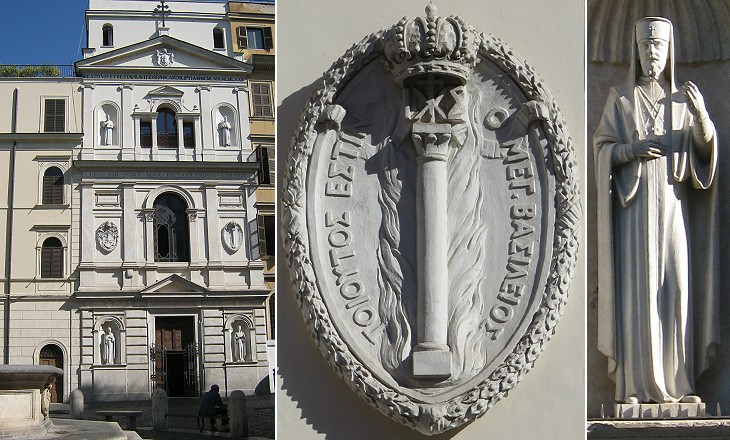 (left) Façade; (centre) symbol of St. Basil the Great (a column surrounded by flames meaning unscathed faith and a motto saying "The Great Basil is like this"); (right) statue of Cardinal Josyp Slipyj (1893-1984), Major Archbishop of the Ukrainian Greek Catholic Church

Sts. Sergius and Bacchus were particularly popular in Constantinople where a large church was dedicated to them. It is possible that the Roman church named after them was founded by Kallinikos I, Patriarch of Constantinople, who was exiled to Rome in 705, because medieval sources called it SS. Sergio e Bacco in Calinico. Another church dedicated to the two saints was situated near Arco di Settimio Severo and it was demolished in the XVIth century. 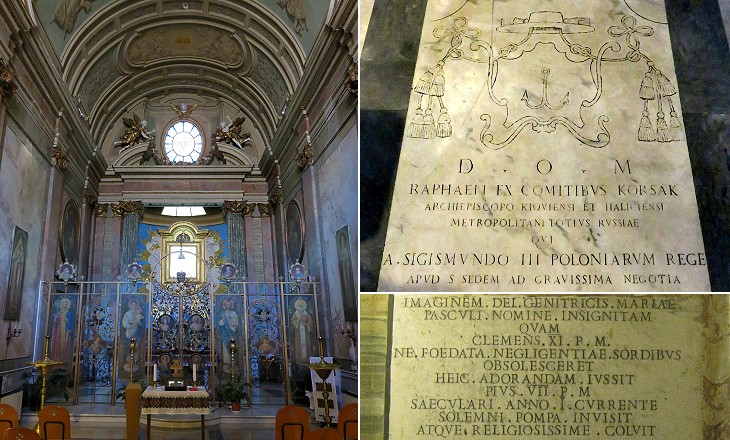 (left) Interior; (right) inscriptions: (above) gravestone of Rafajil Korsak (d. 1640), Archbishop of Kiev, Galicia and Russia of the Ukrainian Greek Catholic Church; (below) inscription celebrating the 100th anniversary of the finding of a fresco depicting a sacred image

The church was renovated in the XVIIth century and with the adjoining monastery it was assigned to Basilian monks from Eastern Europe. In 1718 during the restoration of the sacristy a fresco was discovered on a wall; it was a copy of a famous sacred image found by shepherds in 1470 on a tree at Zyrovici, in today's Belarus; the fresco was detached from the wall and placed on the main altar; the church became known also as Madonna del Pascolo (pasture).
In 1741 the interior of the church was redesigned by Francesco Ferrari; the façade was modified in 1896 and eventually in 1979-973. 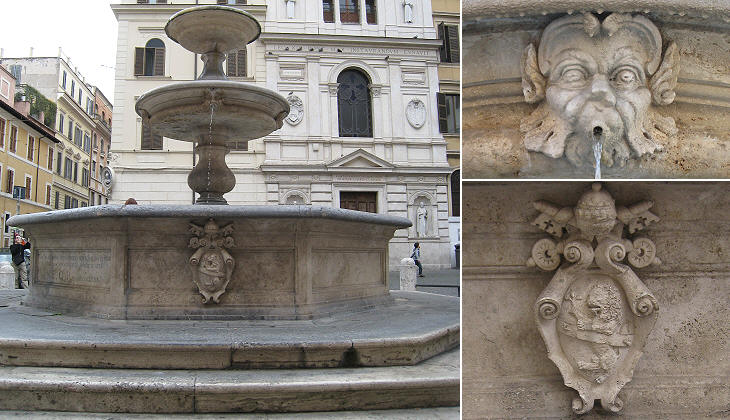 The fountain was designed by Giacomo della Porta and it was built in 1588-589; it was the first of a series of fountains which distributed the water of Acqua Felice, an aqueduct built by Pope Sixtus V. Piazza alli Monti is situated in a depression between the Fagutal, one of the peaks of the Esquiline Hill, and the Viminal.

(left) House where St. Benedict Joseph Labre passed away; (centre) tablet indicating that the building belonged to the hospital of S. Antonio dei Portoghesi (to see similar tablets click here); (right) ancient relief on the back of the house

On April 16, 1783 Benedict Joseph Labre, a French monk who was leading a very penitential life in the streets of Rome, sleeping on the ground and eating very little, lost consciousness on the steps of S. Maria ai Monti. He was brought to a nearby house where he passed away that same day. Later on the room where he died was turned into a small chapel (more on St. Benedict Joseph Labre - external link - it opens in another window).
The narrow street behind the house is named after a Roman relief showing a griffin, a mythological animal often portrayed on the short sides of sarcophagi (you may wish to see that on a sarcophagus at S. Saba).

The neighbourhood retains many XVIIIth century houses which are embellished by an elaborate stucco decoration; in general they were split into apartments (you may wish to see a page covering this type of buildings). 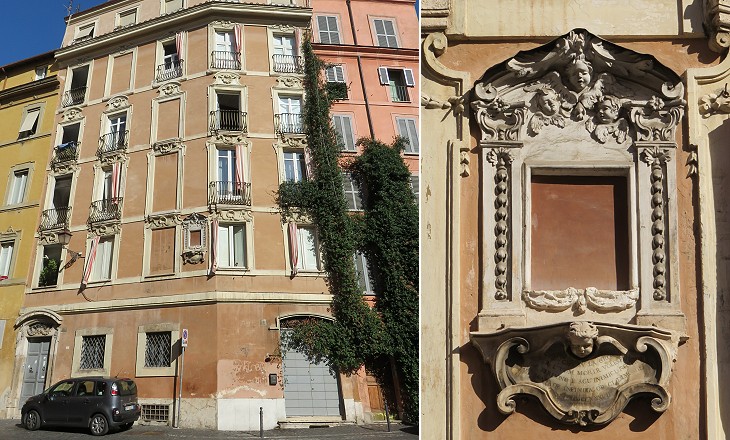 (left) Series of inscriptions/reliefs in Piazza della Suburra; (centre) upper part of the inscriptions; (right) coat of arms of the Copo family

According to tradition Vannozza Cattanei, the mistress of Pope Alexander VI Borgia, lived in a building known as Case dei Borgia between Piazza alli Monti and S. Pietro in Vincoli; a small church at the foot of the steps leading to her house was restored by Stefano Copo, a delegate of the Pope; it was called S. Salvatore ad tres images (at the three images because of three portraits of the Saviour above its entrance). In the XVIIIth century it was a possession of the nearby Monastery of S. Francesco di Paola (Vasi shows it with this name in his Map of Rome - No 200). The church was pulled down in 1884, but the inscriptions celebrating the restoration by Copo were walled in a modern building. They contain also a reference to Subura, the ancient and rather infamous name of the neighbourhood (see an imaginary reconstruction for the BBC "Rome" series).
The image used as background for this page shows an erased coat of arms of Stefano Copo with the words OB MAIESTATEM (in front of majesty) which according to a 1744 guide by Francesco de' Ficoroni were a reference to Julius Caesar, who is known to have lived in a modest house in this neighbourhood until ca 63 BC. You may wish to see the frescoes of a luxury Roman house which were found in 1848 very near Piazza della Suburra.