You may wish to see an introductory page with a map first or two other sections covering accounts by XIXth century travellers in the Holy Land and ancient towns in Israel. 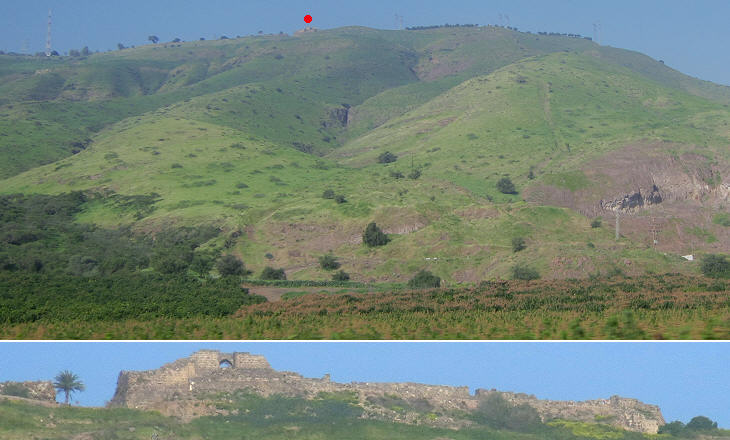 View from the River Jordan valley; the red dot indicates the site of the fortress which can be seen in the enlargement

Kaukab el Hawa is the Crusading Belvoir, which was taken by Saladin in 1188. (..) The soil of this portion of the country, especially on the Kaukab plateau, is of a rich crumbling volcanic character, and very fertile. (..) The modern mud village stands within the crusading fortress.
Claude Reignier Conder - The survey of western Palestine - 1883
The fortress of Belvoir stands at a height of 312 m/873 ft, but because the River Jordan valley is some 200 m/560 ft below the level of the sea, the attackers had to climb 500 m/1400 ft to reach the eastern walls of the fortress. 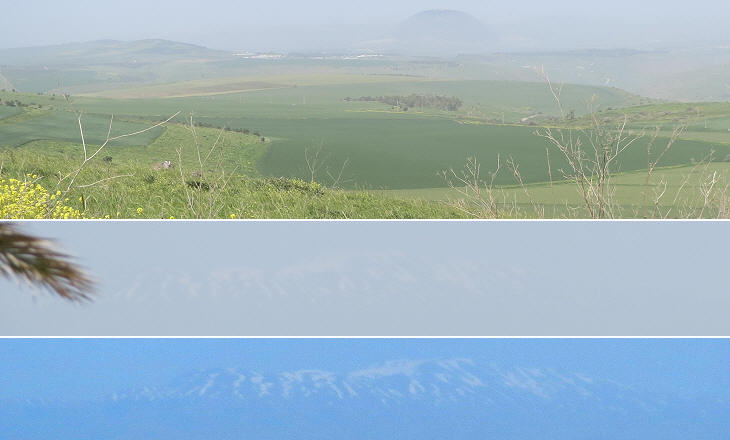 (above) View of Mount Tabor; (below - two images) view of Mount Hermon (in the second image the mountain is made more visible by enhancing the contrast)

The fortress was known as Belvoir or Belvader (Fair View) because it had commanding views over northern and eastern Galilee, in addition to that over the River Jordan valley. The fortress was built by the Knights of St. John in 1168 to prevent an attack on Jerusalem from the River Jordan valley. At that time the river did not mark the border of the Kingdom of Jerusalem, which included a large territory beyond it (Oultrejordain in Old French).
The Knights of St. John were a military order which originated from a brotherhood founded at Jerusalem by Amalfi merchants and named after St. John the Baptist. Because of their activity in favour of the pilgrims, the Knights were also known as the Hospitallers. The military aspect of the order acquired a major importance towards the end of the XIIth century, when the Muslim threat on the Crusader States increased. They were entrusted with the defence of key fortresses such as Krak des Chevaliers and Marqab in Syria. 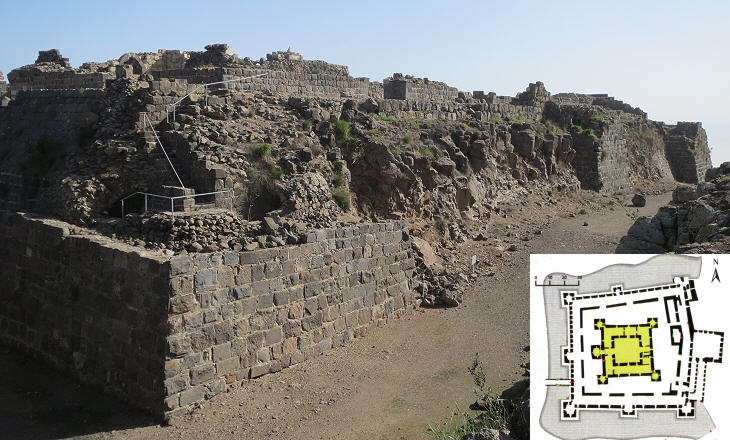 Southern side of the outer walls; (inset) plan of the fortress

The masonry is finely hewn black basalt ashlar, the stones being from 2 to 3 feet long, with a broad boldly cut marginal draft, and a central rustic boss to each stone. It is probable that a gallery was built within the wall on every side, and the ditch thus defended through loopholes. Conder
Unlike many other fortresses of the region, Belvoir was neither built upon a previous fortification, nor did it exploit a natural defence such as a ravine. The top of the hill was almost flat and therefore it provided an opportunity to design a state-of-the-art fortress. It was made up of two square enclosures. Each side of the external one was protected by three towers. 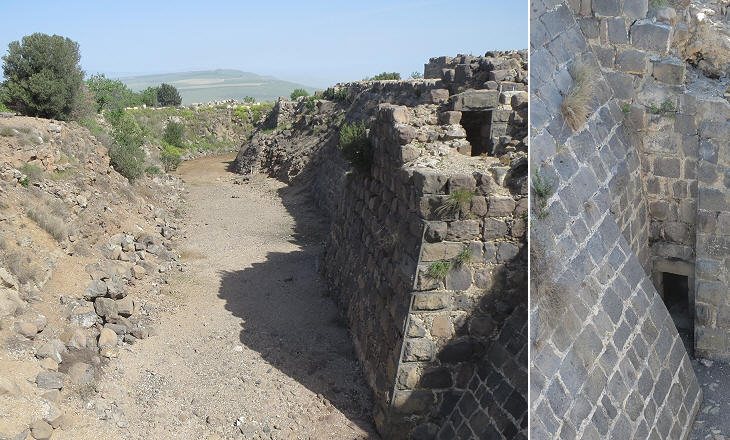 (left) Moat of the western wall; (right) gate for sallies

This fortress is surrounded by a strong wall of black basalt, and by a ditch on three sides, whilst on the east it overhangs the Jordan valley. (..) A tower projects 20 feet from the west wall; it is 30 feet north and south, and a small sally-port or postern leads by a sloping ascent from the ditch to the interior. (..) The ditch on the north, south, and west is about 50 feet broad, the counter-scarp rudely hewn in the black basalt. It is probable that it formed the quarry from which the stones of the wall were taken. Conder
The three sides not overlooking the valley were protected by a moat; the defenders could make surprise sallies from small gates at the foot of the towers. Because the openings are so small and could be reached only through narrow stairs we can assume that the objectives of the sallies were very limited, such as setting fire to siege towers or other siege engines. 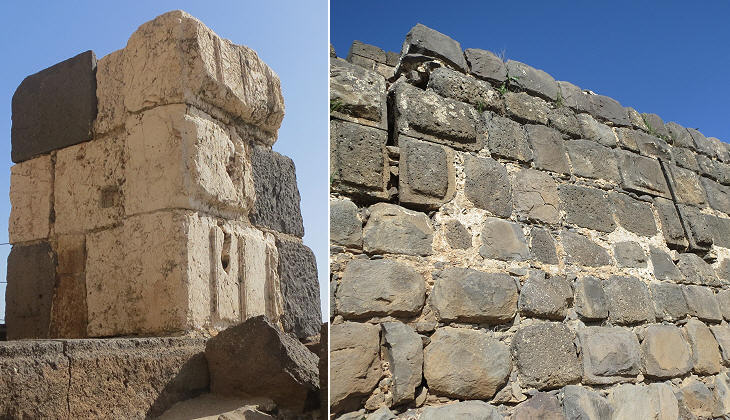 Eastern side: (left) pillar of the main gate with evidence of the location of the hinges; (right) arrow slits in the wall after the gate

The eastern wall was loopholed, and could be defended from the vaulted passage between it and the inner eastern wall. Conder
The fortress was built by employing black volcanic stones, but for arches and gates a limestone was utilized to lighten the overall appearance of the complex. Some details, such as the arrow slits are very similar to those one can see at Nimrod Castle, a Muslim fortress built a few years after Belvoir. The image used as background for this page shows a capital found inside the fortress. 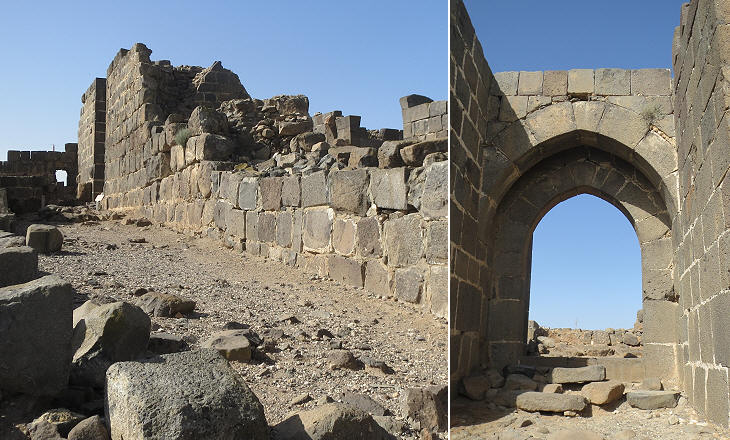 The main entrance was on the east, but approached by a causeway leading through the southern wall. On the east, therefore, there is an interior wall, and the space between the two was arched over. The vaulting remains perfect to the north of the gateway. A long buttress projects from the inner wall south of the gate, so as to form a narrow passage, before arriving at the gateway itself, which has a pointed arch. The entrance is thus, as in most crusading fortresses, very carefully guarded. Conder
The eastern side of the fortress had a complex design with two gates and a long passage between them. Relations between the Kingdom of Jerusalem and Saladin, Sultan of Egypt and Syria, were tense at the time the fortress was built. The vassals of the King of Jerusalem acted as independent sovereigns and some of them did not hesitate to attack caravans on their route to Mecca or make cattle-raids in Muslim territories. Other vassals instead established peaceful relations with Saladin. 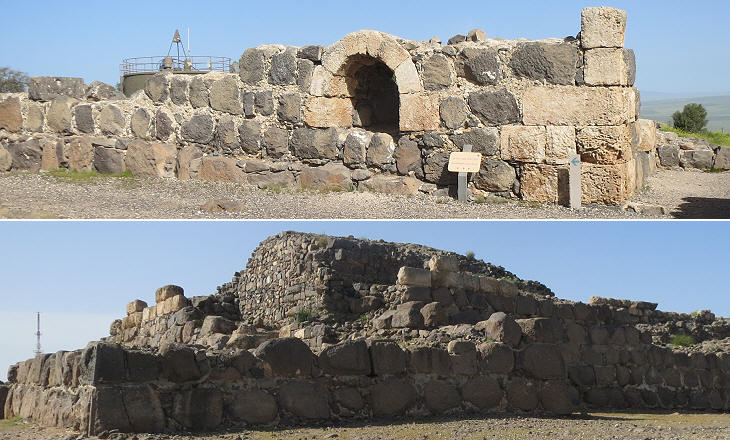 (above) North-eastern tower; (below) inner fortress

In the middle of the fortress are other vaults of similar character, forming probably the foundations of the keep, which has now disappeared. (..) A small modern building stands over these vaults, and is constructed partly of ancient materials. Conder
In 1187 Saladin laid siege to Tiberias, in response to Crusader attacks on Muslim caravans en route to Damascus. The King of Jerusalem marched on Tiberias with a large army, but he was defeated at Hattin and taken prisoner. Saladin did not leave the enemy time to reorganize and he speedily seized Jerusalem and Acre, the main port of the kingdom. The vaulting is of rag-work, the ordinary barrel vault seen in all Crusading buildings. Conder
In his move towards Jerusalem Saladin did not enter the River Jordan valley and Belvoir was sieged only after the fall of the capital. The siege lasted until 1189 when the attackers managed to conquer a huge outer tower on the eastern side of the fortress. At this point the Knights surrendered. In 1220 key parts of the fortress were razed to the ground by the Sultan of Damascus who feared that a new crusade could restore the Kingdom of Jerusalem to its previous state. 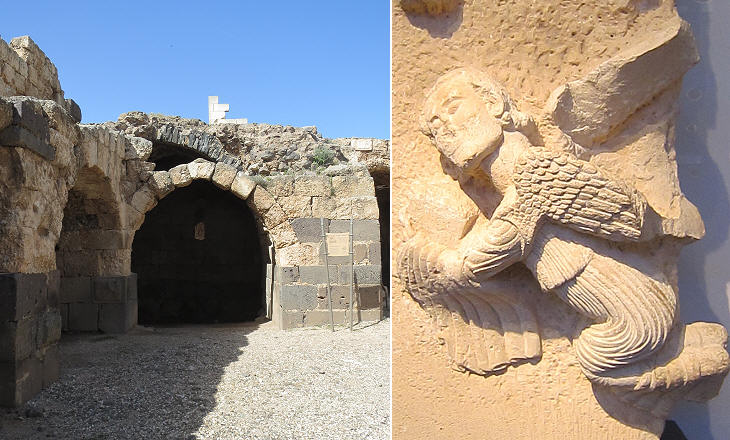 (left) Church; (right) Museum of Israel: relief depicting an angel found in the church, most likely the symbol of St. Matthew

The external walls protected a small square fortress with a tower at each corner. It is unlikely this fortification could withstand a siege and as a matter of fact the Knights surrendered without attempting a last resistance within its walls. The inner fortress housed the barracks and facilities where the Knights lived. A church in the courtyard was decorated with reliefs of which only a small fragment was found during the excavations which were carried out in 1966-1968. 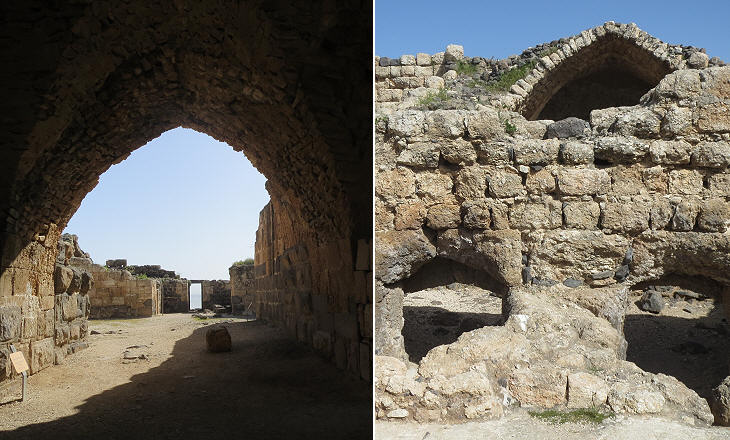 It is but a nest of eagles and the dwelling place of the moon.