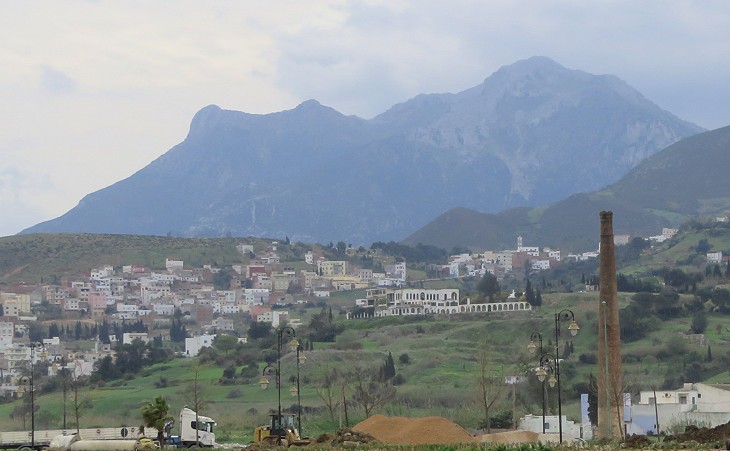 Rif mountains to the south of the town

During the troubles which ensued upon the death of Moulay Ismail in 1727, the savage tribes inhabiting the mountains descended into the level country, and in the ravages they perpetrated reduced the palace of Ahmed Pasha at Tétouan to a heap of ruins, long since overgrown with trees and shrubs, but presenting a fine object to the lover of the picturesque.
Thomas Roscoe - The Tourist in Spain and Morocco - 1838
The Medina (walled town) of Tétouan constitutes an outstanding example of a fortified Mediterranean coastal town, built against a North Moroccan mountain landscape.
From the UNESCO synthesis of the universal value of Tétouan which in 1997 was included in the World Heritage List.
The region to the south of the town is known as er-Rif. Its rugged mountains provided a shelter to many rebels and in particular they favoured the creation of the independent Republic of Rif which was declared in 1923 and withstood the joint attacks of the French and Spanish modern armies until 1926. At that time Tétouan was the capital of the Spanish Protectorate over Morocco. 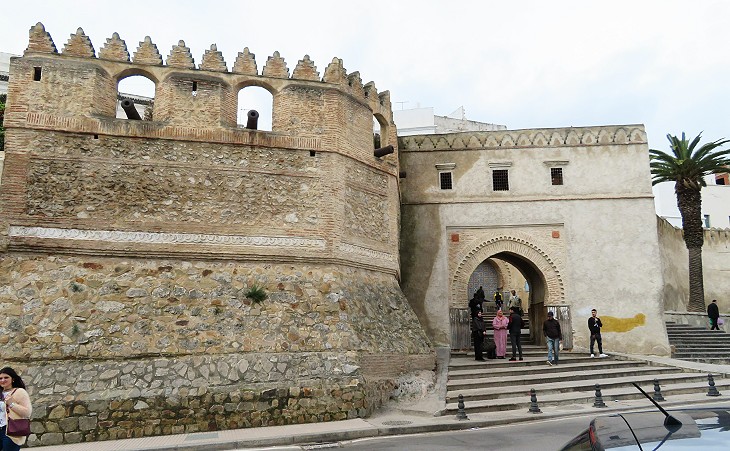 (Tétouan) was reedified and replanted a new with inhabitants by a certaine captaine of Granada, who was called by the Portugals Almandali (Ali al-Mandri who fought on the side of Boabdil, the last King of Granada). Who having obtained the government of this towne, and gotten licence to repaire it, environed the same with new wals, and built an impregnable castle therein compassed with a deepe ditch. Afterward making continuall warre against the Portugals, he extremely molested and endamaged their townes of Septa (Ceuta), Casar (Ksar es-Seghir), and Tangia (Tangier): for with three hundred valiant horsemen of Granada he made daily incursions and inroades upon the Christians, and those that he tooke, he put to continuall labour and toile about the building of his forts. Upon a time I my selfe travelling this way saw three thousand Christian captives, who being clad in course sacke-cloth, were constrained in the night to lye fettered in deepe dungeons.
Leo Africanus - The history and description of Africa: and of the notable things therein contained - 1526 - 1600 translation by John Pory
We entered this truly Moorish city, with its double walls and superb gateways. Having passed the first gate, we skirted along the second wall for a considerable way before we reached the second, where we expected to be detained until word should be conveyed to the governor of the arrival of two Christian travellers. Roscoe
Travel accounts talk about a double wall protecting the town. The inner one which surrounded the El-Blad neighbourhood, the oldest one, is hardly noticeable today, while the outer one is almost entire.
The gate of Bab el-Okla and its adjoining fortifications were built by Sultan Moulay Abd al-Rahman after Tétouan was bombarded in 1829 by the Austrian fleet in retaliation for its being a nest of pirates. 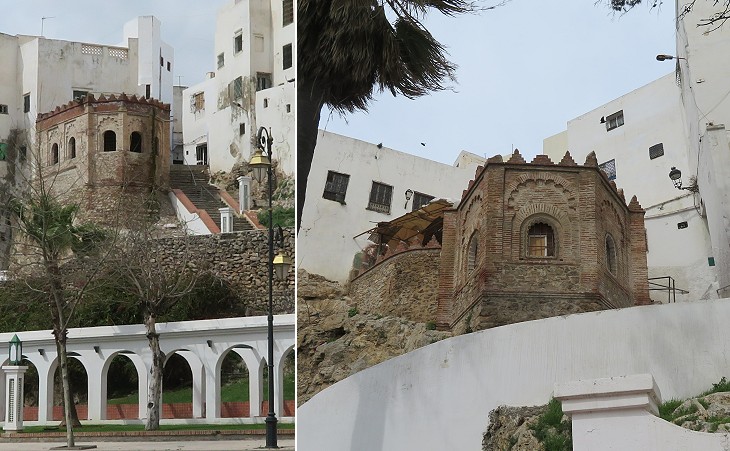 Other fortifications near Bab el-Okla

Tetuan has preserved a communication with Gibraltar, whence the ships come when the wind is in the west, and does not permit them to make Tangiers. The shore of Tetuan is only safe when the wind is in the west, at which time ships ride secure; but when it veers to the east, they must remain there no longer.
Louis de Chénier - The Present State of the Empire of Morocco - 1788
The development of Tétouan is linked to the conquest of Ceuta and other ports on the Strait of Gibraltar by the Portuguese. It did not have a proper harbour, but ships could moor at the mouth of a small river; the town was situated on high ground at a distance from the sea so that it could not be directly attacked by enemy ships. 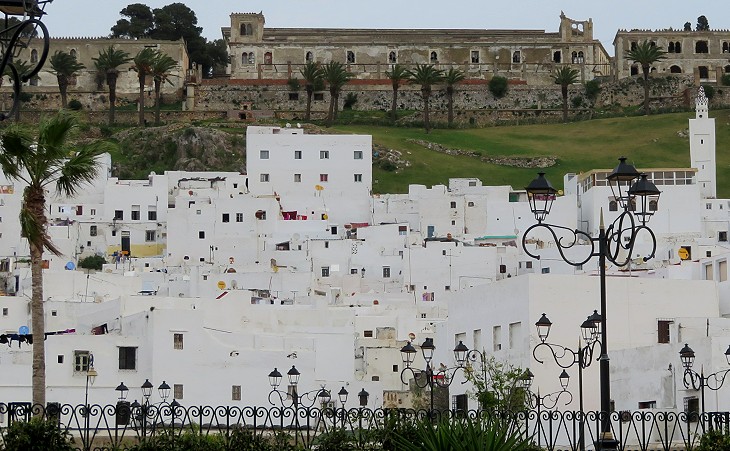 Tangier and Tetuan are not fair specimens of Morocco; they form a transition from Europe to Africa, being neither Spain nor Morocco.
James Richardson - Travels in Morocco - 1860
The town was rebuilt by Andalusian refugees who had been expelled by the Spanish. This is well illustrated by its art and architecture, which reveal clear Andalusian influence. Although one of the smallest of the Moroccan medinas, Tétouan is unquestionably the most complete and it has been largely untouched by subsequent outside influences. UNESCO 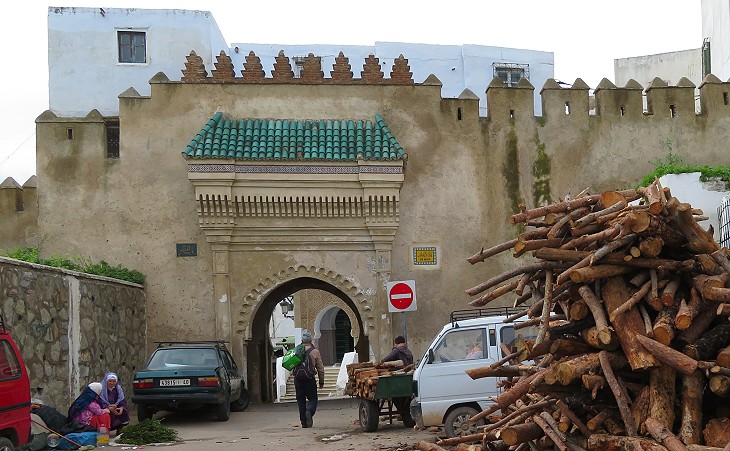 The Medina of Tétouan is surrounded by a historic wall of approximately 5 km in length and accessed by means of seven gates. UNESCO
By and large the gates seem to have been redesigned in the XXth century to enhance their picturesque Moorish aspect. Bab M'Kabar was one the gates of the oldest part of the town. It is the exit towards a cemetery and sellers of timber can be seen in its vicinity. It is the only gate where local guides do not wait for tourists to whom offer their services. 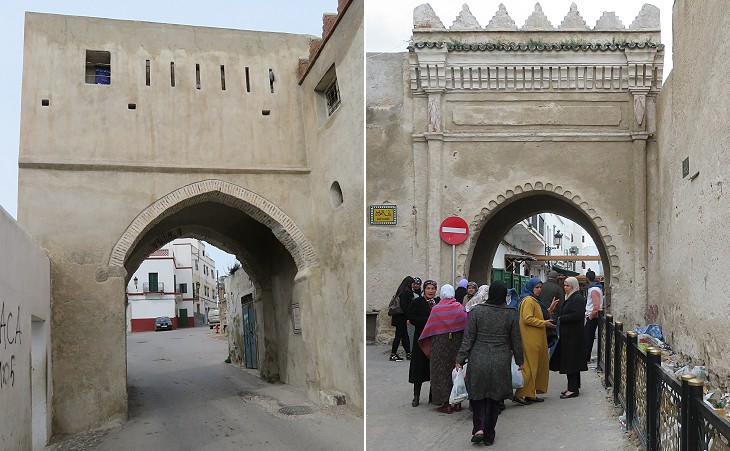 The city of Tetuan is inhabited by Moors and Jews, who most of them, speak Spanish. They are commercial, gentle in their manners, and polite. The environs of this city are planted with vineyards and gardens, kept in good order; and the fruits here are better and more carefully nurtured than in the other parts of the empire. (..) The Europeans of the present century have traded here; and this was the place of residence for several consuls till the year 1770, when the reigning Emperor would no longer permit them to remain, nor again to establish themselves, in this city. Chénier 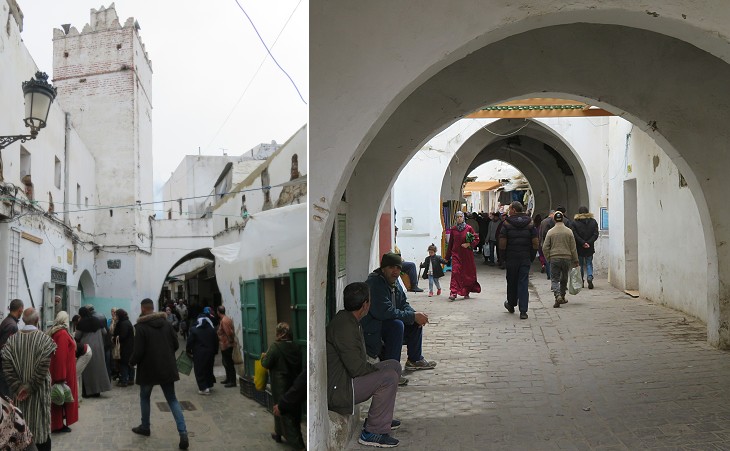 The urban layout is characterised by main streets linking the gates to one another and giving access to open spaces (squares and smaller squares) and public buildings such as funduqs, mosques, zawayas and to the artisan and commercial districts, and on the other hand to smaller lanes leading to passages and semi-private residential areas. (..) The Medina possesses an original urban fabric characterised by the hierarchy of streets and division of residential, commercial and artisan areas following a clearly defined plan. In general, the built heritage such as the zawayas, fountains, hammams, ovens, and historic silos, have retained their authenticity, be it in their shape, their construction materials or their decoration or even for some, their function. The majority of houses have remained intact, even although some floors have been illegally added and interior separations have been installed. UNESCO 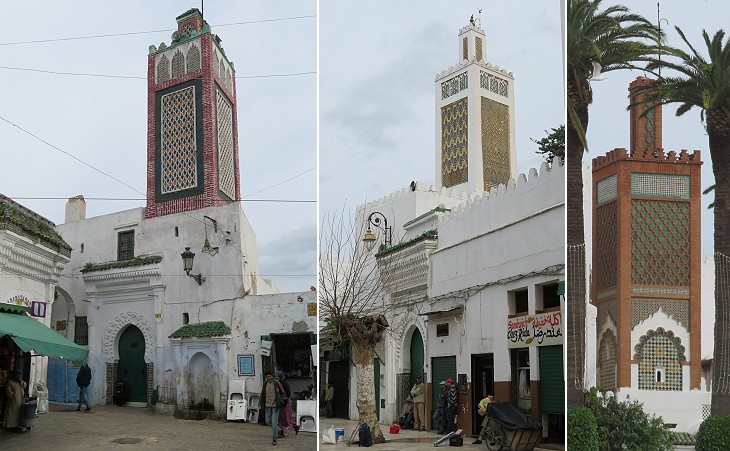 Square towering minarets are the main feature of Moroccan architecture. Because they were erected also in Andalusia, when this region was part of the Almohad Empire, they are usually referred to as Andalusian minarets, especially because the Giralda of Seville made this type of monuments widely popular. Tétouan has a number of Andalusian-style minarets; their being decorated with heavily contrasting colours indicates that they are rather modern. 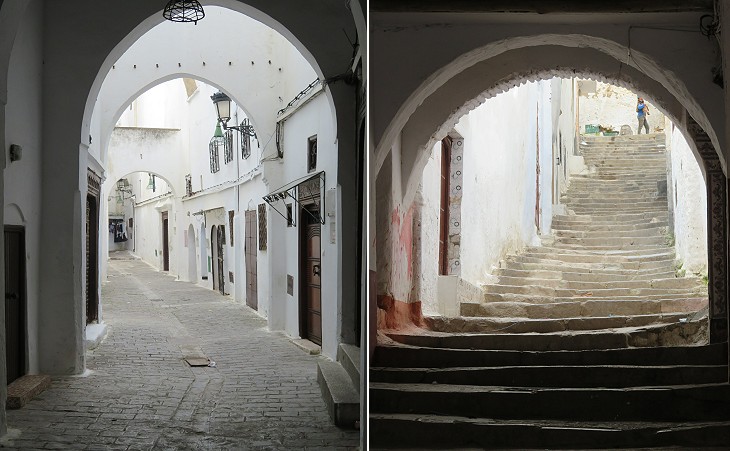 Local guides warn those who are not willing to buy their services that they will get lost in the maze of streets of the old town. The medina however stands on the slope of a hill; the long east-west crowded streets run on flat ground, whereas the short north-south streets slope down towards the modern town, so it is easy to know which way to go. 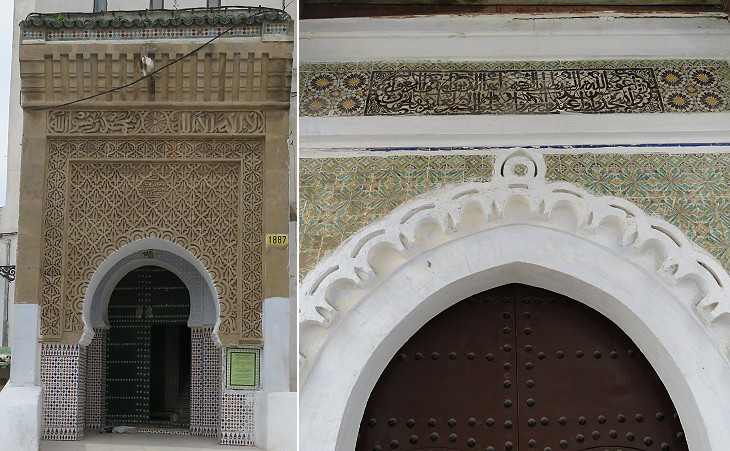 Tétouan has a small, but interesting museum with exhibits from Roman Lixus and on the Portuguese/Spanish tenure of the region.
The image used as background shows a sebka, a typical Moroccan/Andalusian decorative pattern based on a grid of diamonds at Mosque El-Fouqia.