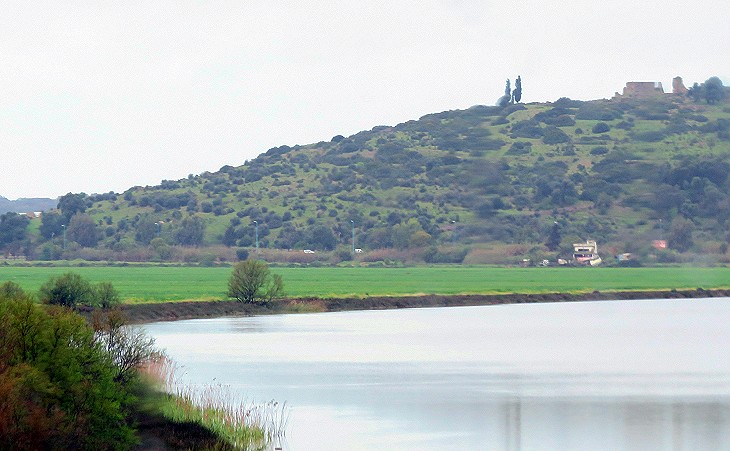 Thirty-two miles distant from Julia Constantia is Lixos, which was made a Roman colony by Claudius Caesar, and which has been the subject of such wondrous fables, related by the writers of antiquity. At this place, according to the story, was the palace of Antaeus; this was the scene of his combat with Hercules, and here were the gardens of the Hesperides. An arm of the sea flows into the land here, with a serpentine channel, and, from the nature of the locality, this is interpreted at the present day as having been what was really represented by the story of the dragon keeping guard there. This tract of water surrounds an island, the only spot which is never overflowed by the tides of the sea, although not quite so elevated as the rest of the land in its vicinity. Upon this island, also, there is still in existence the altar of Hercules; but of the grove that bore the golden fruit, there are no traces left, beyond some wild olive-trees.
Pliny the Elder - Historia Naturalis - Book V - translation by John Bostock and H.T. Riley
Coasting along to the south we find, at the distance of twelve leagues (from Tangier), the city of Laracha, built on the river Luccos, which is the Lixos of the Greeks. The name of this City comes from the Arabic El-Arrais, which signifies a place abounding in gardens: perhaps its founders were desirous to preserve the memory of the garden of the Hesperides which is supposed to have been here situated.
Louis de Chénier - The Present State of the Empire of Morocco - 1788 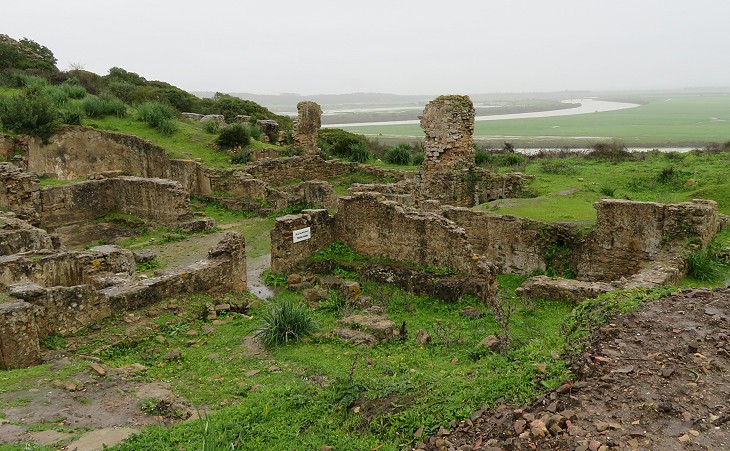 Baths and view of the coastline in the distance; in the past the ocean was near the foot of the hill

L'Araisch (or El Araish) is situated at the extreme left bank of the Ued-Kus, so that on one side it faces the river, and on the other the sea. About three miles and a half up the river is the site of the ancient Punic town of Lya, called later by the Greeks and Romans Lina, once the most important colony on the Atlantic Ocean. (..) The ruins have been visited by Sir Drummond Hay and Heinrich Barth, though without any important discoveries being made by either, which, indeed, except by clearing away the soil and digging, cannot be done. (..) Of the island mentioned by the ancients as lying at the mouth of the Lixos, and called by them Hesperides, at the present day no trace whatever remains, unless one can suppose the sand-bank, not a mile in extent, situated in the purse-shaped river-mouth, which is visible at very low tides, to be the remains of the once so fruitful Hesperides island, though, supposing a general sinking of the Atlantic coast to have taken place, it is not impossible.
Gerhard Rohlfs - Adventures in Morocco (in 1861) - 1874 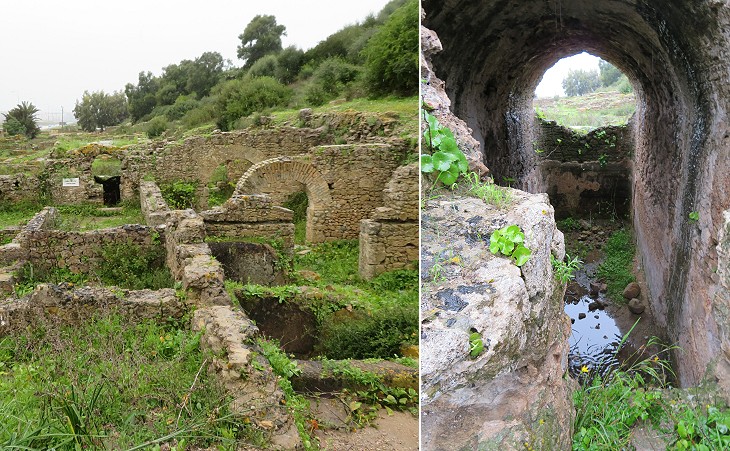 The economy of Lixus during the rule of the Mauretanian kings and (after 40 AD) of the Romans was based on the manufacturing of garum, a fish sauce made with viscera of tuna. These were catched during their seasonal migrations from the Atlantic Ocean to the Mediterranean Sea and garum factories have been found also at Tangier and at Baelo Claudia, on the northern side of the Strait of Gibraltar. The factories at Lixus are very large ones and their establishment was favoured by the availability of fresh water from the river which was used for cleaning and brining. According to Strabo: not unimportant, either, is the fish-salting industry that is carried on (..) in the seaboard outside the Pillars; and the product is not inferior to that of the Pontus. (Strabo - The Geography - Book III:2 - translation by H. L. Jones) 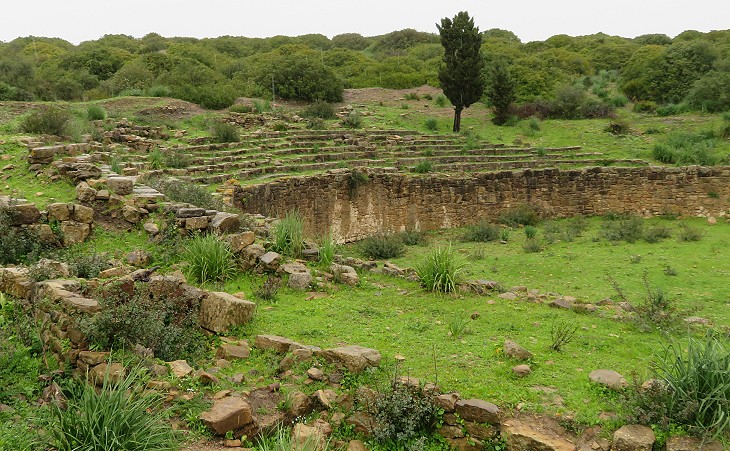 This entertainment facility at the foot of the hill is a rare example of theatre/amphitheatre because it was designed for housing both theatrical plays and gladiatorial combats. The cavea (seating section) was half of an ellipse (the typical shape of amphitheatres) and a stage stood opposite it (see a list of Roman amphitheatres in this website). In the IIIrd century its use as theatre was discontinued, the stage wall was dismantled and its stones were used for building the bath establishment. 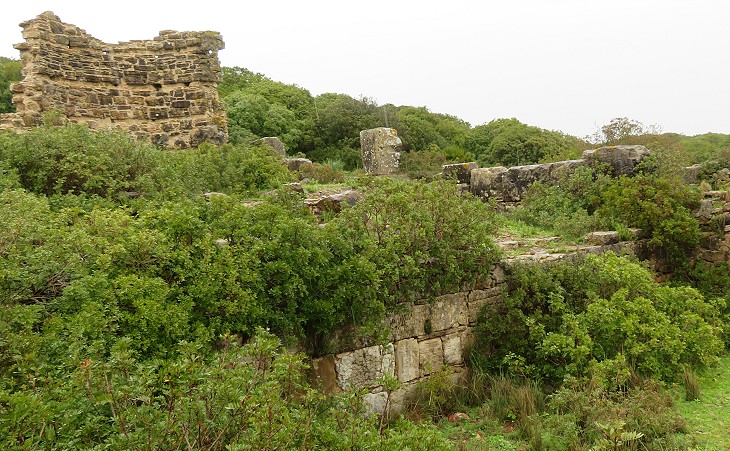 Walls between the Theatre / Amphitheatre and the Upper Town

When the first excavations unearthed sections of walls surrounding the upper part of the hill, archaeologists thought that they protected the powerful Carthaginian town referred to by many ancient writers. Today they are dated to the Mauretanian tenure of Lixus and in part to the initial Roman period. The passage to the direct Roman rule was not smooth and Emperor Claudius sent troops from Spain to quell a revolt, which seems to have affected Lixus too, although ancient historians wrote about military campaigns in the mountains or in the desert. 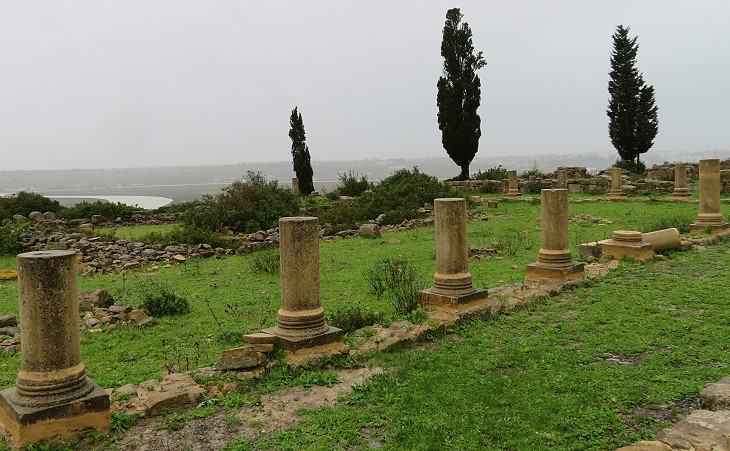 Palace of Juba II: one of the peristyles

Excavations carried out in 1948 by Miquel Tarradell, a Spanish archaeologist (at the time Lixus was part of the Spanish Protectorate over Morocco) identified evidence of temples at the very top of the hill; for this reason the location was known as Area of the Temples. More recent studies, while confirming that some temples did exist came to the conclusion that they were replaced by a palatial residence during the reign of Juba II, King of Mauretania in 25 BC-23 AD. 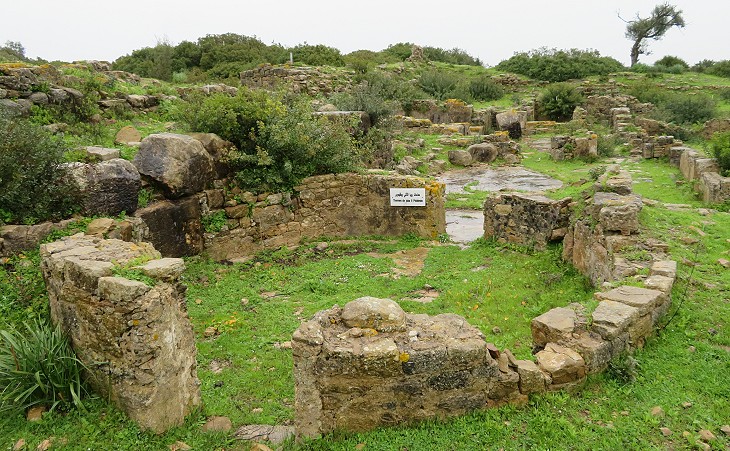 The current opinion is mainly based on comparisons between the layout of the buildings at Lixus and those of the House of Augustus on the Palatine Hill and of the House of the Faun at Pompeii. A marble throne which was found at Lixus (it is shown in the introductory page) is another indication that Juba II might have had a palace in the town. 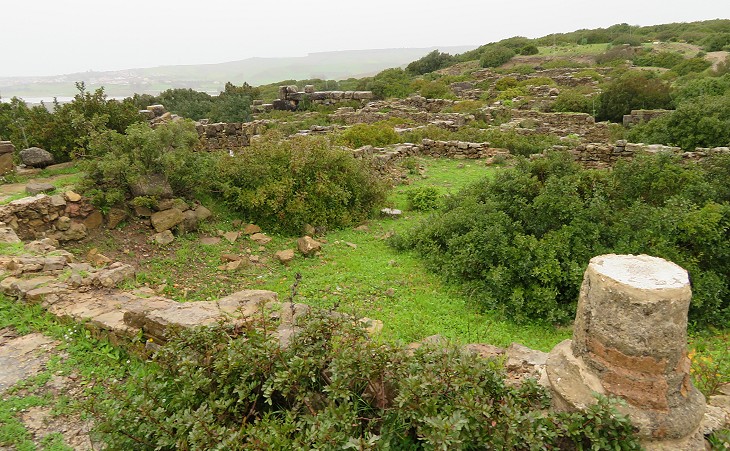 A residential neighbourhood was located in a terraced space slightly below the Palace of Juba II. Part of it was affected by the collapse of the walls which supported it. Here three Roman houses were identified in the 1950s and their floor mosaics were moved to Tétouan, the capital of the Spanish Protectorate. 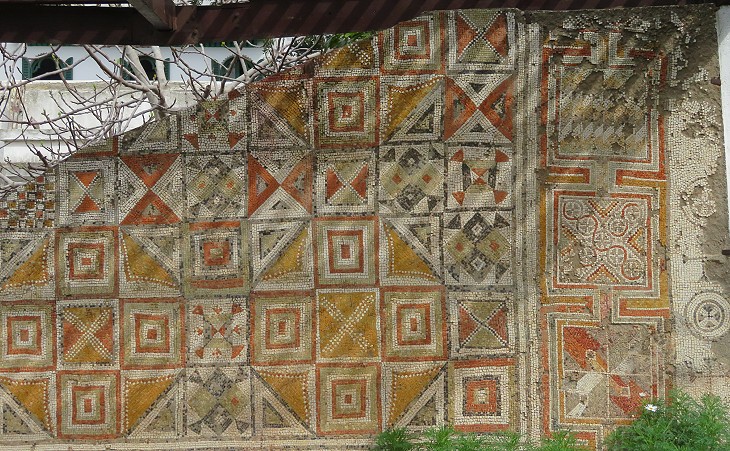 Although Morocco regained full independence and unity in 1958 some effects of the divisions of the past can still be noticed in the different approach of the management of the museums in allowing the taking of photographs; this is allowed at Rabat, but it is forbidden at Tétouan with the exception of the exhibits which are displayed outdoors. 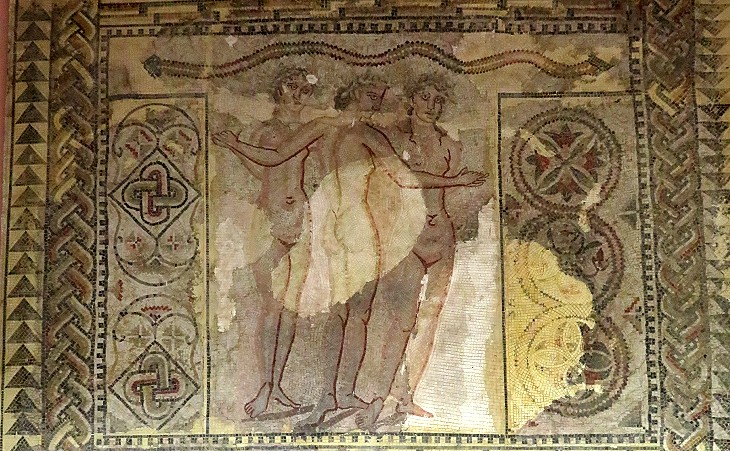 Museum of Tétouan: mosaic from Lixus from the House of the Three Graces who are portrayed according to the traditional iconography

The number of floor mosaics found at Lixus is rather small when compared to that at Volubilis; those at Lixus often have scenes with figures of a large dimension, whereas at Volubilis this can be found only in the Mosaic of Navigium Veneris. 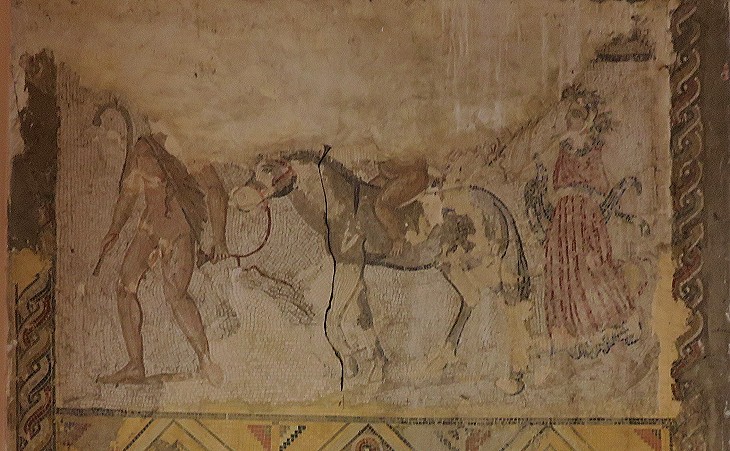 The subjects of the mosaics are those which were made very popular by Ovid's The Metamorphoses.
Lixus declined towards the end of the IIIrd century AD as an effect of a long period of military anarchy. In 286 Emperor Diocletian realized that the Empire had no longer the resources to military control the whole of Mauretania Tingitana and he reduced the size of the province by abandoning its southern part which included Volubilis and Sala. Lixus became a frontier town and this had a negative impact on its economy. 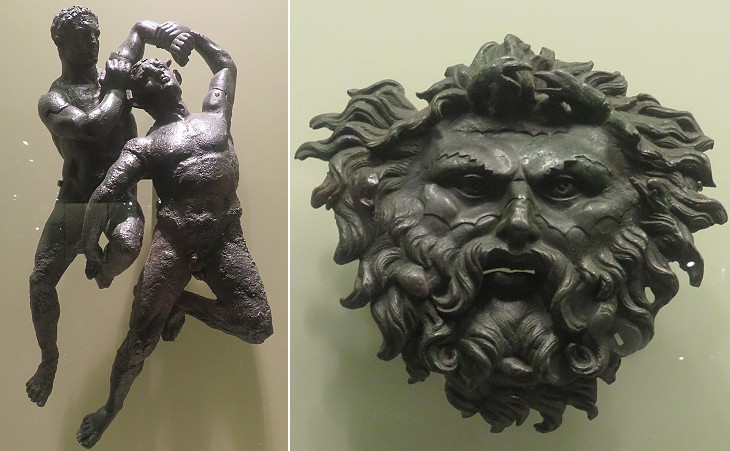 Archaeological Museum of Rabat: bronze exhibits from Lixus: (left) Theseus and the Minotaur; (right) head of Oceanus with crab claws (which are better seen in mosaics)

Lixus was very remote from Italy, Greece and Turkey where marble statues or sarcophagi were made and then shipped to other parts of the Empire. The wealthy inhabitants of the town had to content themselves with small bronze artefacts.

Move to:
Introductory page
Sala and Chellah
Volubilis
Tangier and other Roman towns