You may wish to see an introductory page on this section or pages on Volubilis first. 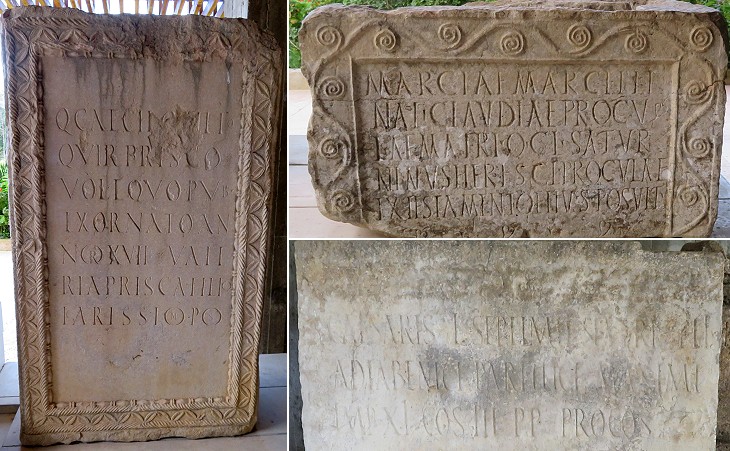 Museum of Volubilis: (left and right-above) decorated funerary inscriptions; (right-below) inscription celebrating Emperor Septimius Severus in which the name of his son Geta was erased

Emperor Claudius granted Volubilis the status of municipium in recognition of the loyalty of its inhabitants who acquired almost all the rights of Roman citizenship and a degree of self-government. This led to a Latinization of the local names; those written on many funerary inscriptions are based on the Roman triple name (praenomen, nomen and cognomen). In some instances the dead had full Roman citizenship and this was made clear by mentioning his "tribe" of origin. The inscription of Q(uintus) Caecil(ius) Priscus states that he belonged to Quir(ina tribu), a status which was initially reserved to the Sabines of Reate (Rieti), but later on was attributed also to the provincial élites who acquired full Roman citizenship. 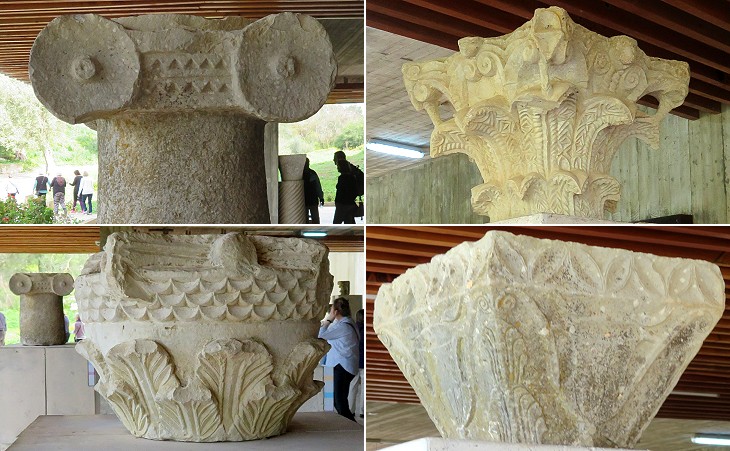 The availability of a calcareous grey stone meant that the columns and capitals which decorated the buildings of Volubilis did not need to come from abroad. Local stonecutters were able to obtain fine results which in some instances departed from the design of the classical orders. Also many funerary inscriptions show the hand of a skilled stonecutter and the development of local decorative motifs. 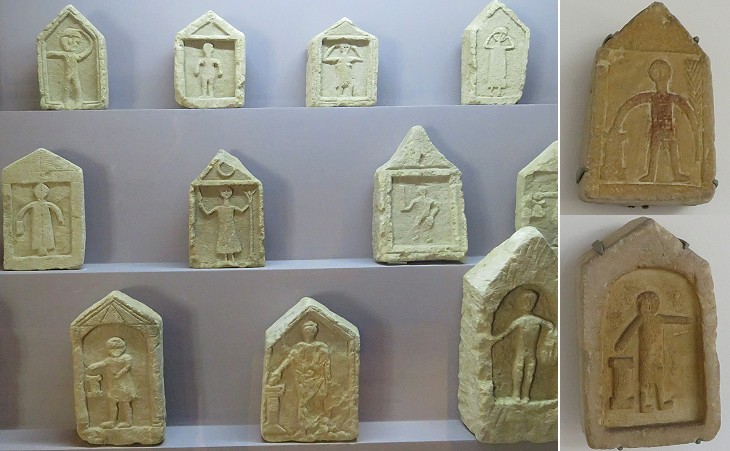 In 1915 the site of a shrine was discovered outside the walls of Volubilis. The excavations led to finding more than 800 votive stelae. The temple is usually named after Saturn (most likely a Latinized name for Baal, a Phoenician/Carthaginian god) who was widely worshipped in towns of Algeria and Tunisia. The roughly carved stelae of Volubilis however do not match the quality of those found elsewhere, e.g. at Thamugadi in Algeria. The basic pattern shows a figurine next to an altar in a frame which is characterized by a triangular top. 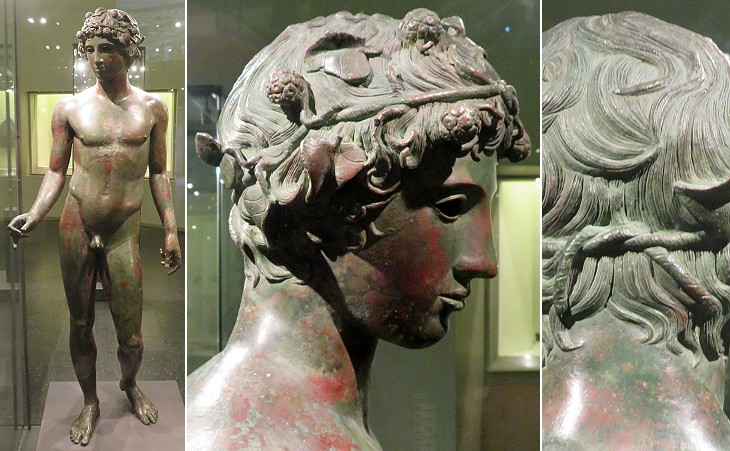 Archeological Museum of Rabat: Ephebe Crowned with Ivy from the House of the Ephebe (see another statue of an ephebe in the introductory page)

The year 1932 provided us, on the very first day, as a sort of gift, with a very valuable finding.
French archaeologist Etienne Michon reported the discovery of this fine bronze statue with these words. He added that the statue was in very good condition with only the eyes missing (they were most likely made of vitreous paste). In many ways the posture resembles that of other bronze statues of ephebes (e.g. that of Selinunte) and the quality of the execution brings to mind some bronze statues of Villa dei Papiri at Herculaneum. The ivy crown is an attribute of Bacchus.
The right hand most likely held something, perhaps a torch and in his report Michon quoted Lucretius' De Rerum Natura: Aurea sunt juvenum simulacra per aedes / Lampadas igniferas manibus retinentia dextris / Lumina nocturnis epulis ut suppeditentur (Golden images of boys along the halls, with right hands holding out the lamps ablaze, the lights for evening feasts - translation by William Ellery Leonard). 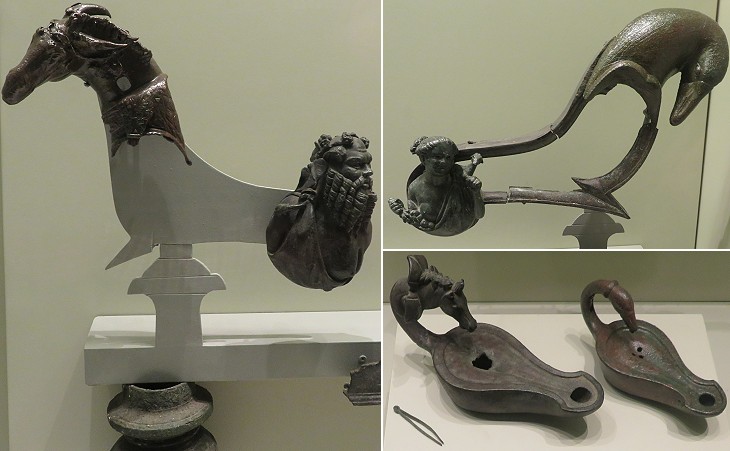 The bronze artefacts which decorated the richest houses of Volubilis were most likely made in Greece and bought at Tingis (Tangier), the capital of the province. In 1907 the wreck of a ship carrying fine bronze artefacts (it opens in another window) from Greece was found by chance at Cape Africa (Mahdia). Other bronze artefacts were found in wrecks near Marseille. Two large bronze statues from Greece were found at Riace near Reggio Calabria in 1972. A flourishing trade of marble sarcophagi developed in the IInd century, but maybe because they were very heavy and expensive they did not reach remote Volubilis. 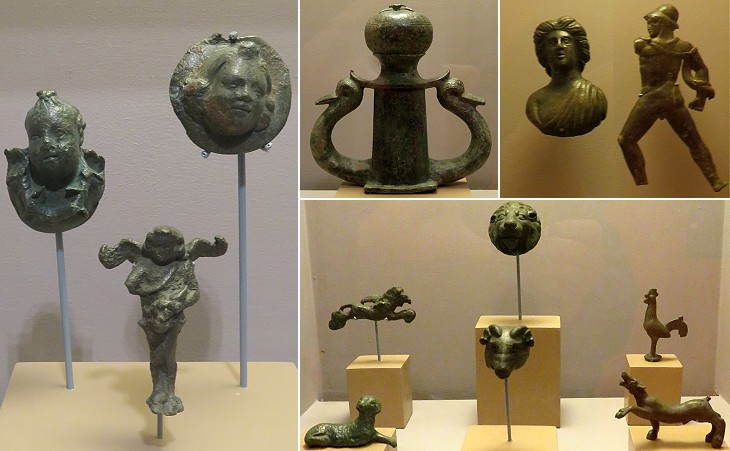 In 2009 a small museum was inaugurated at the archaeological site. Its collections include recent findings and many minor items which were not deemed important enough to be displayed in the Archaeological Museum of Rabat, the capital of Morocco. The bronze exhibits show that they were not reserved only to the decoration of the houses. Some of them were toys for children. 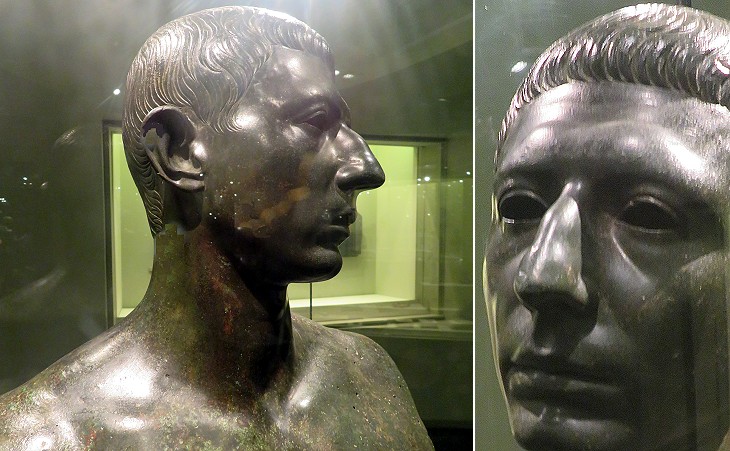 Archaeological Museum of Rabat: bust of Cato the Younger from the House of the Voyage of Venus

It is unlikely that this bust was listed in the catalogue of a bronze artefact reseller at Tingis. It had a political connotation, i.e. it portrayed a keen supporter of the Republican tradition of Rome, which greatly restricted the number of potential buyers. It was found in a house which belonged to a very rich person who had a good understanding of classical literature. He might have commissioned it during a journey to Rome or Athens (also this exhibit brings to mind busts at Villa dei Papiri). Museum of Volubilis: mosaic portraying Medusa from the House of Orpheus; see a similar mosaic at the Archaeological Museum of Sousse.

The head of Medusa had an apotropaic effect, i.e. that of chasing evil influences. It was often depicted on sarcophagi (even Christian ones), but also at the centre of a large floor mosaic. 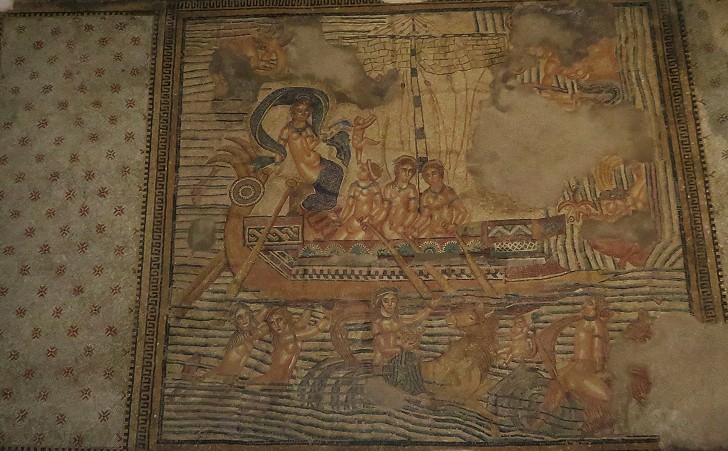 Museum of the Kasbah of Tangier: mosaic from the House of the Voyage of Venus (aka "Navigium Veneris)

This mosaic is the "must see" of Volubilis, but one has to go to Tangier to see it. According to Ovid, Venus travelled through the sky on a chariot drawn by swans, so the literary reference for the subject of this mosaic must be looked for elsewhere, perhaps in Lucius Apuleius' The Golden Ass: Enim sitarchia navigium Veneris indiget sola, ut in nocte pervigili et oleo lucerna et vino calix abundet (The voyage of Venus wanteth no other provision than this, that the lamp may be all the night replenished with oil, and the cups filled with wine. Book II - translation by W. Adlington - revised by S. Gaselee). 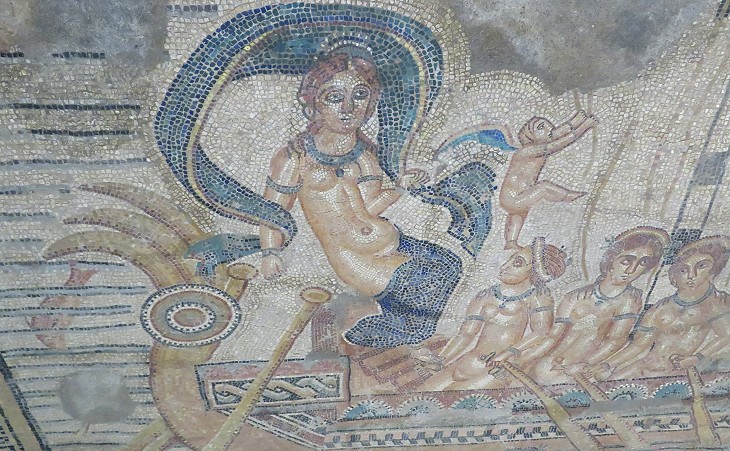 Mosaic of "Navigium Veneris": detail showing the goddess, the Three Graces and Eros

The image of Venus brings to mind that of the sea goddess Amphitrite in a mosaic at Utica, but the portrayal of the Three Graces at the oars is utterly different from the usual iconography which can be seen in many mosaics and statues. Also Eros taking care of the sails is not the traditional naughty boy throwing golden and lead arrows.
It is possible that the design of this mosaic was developed on the basis of suggestions made by the landlord, rather than out of a catalogue of drawings, which would explain why it is so unique. Mosaic of "Navigium Veneris": detail showing two Nereids, sea nymphs (two other Nereids can be seen in the introductory page)

The image used as background for this page shows a bronze statue from the House of the Cavalier.

Return to the page on the main monuments of Volubilis or to that showing its houses.