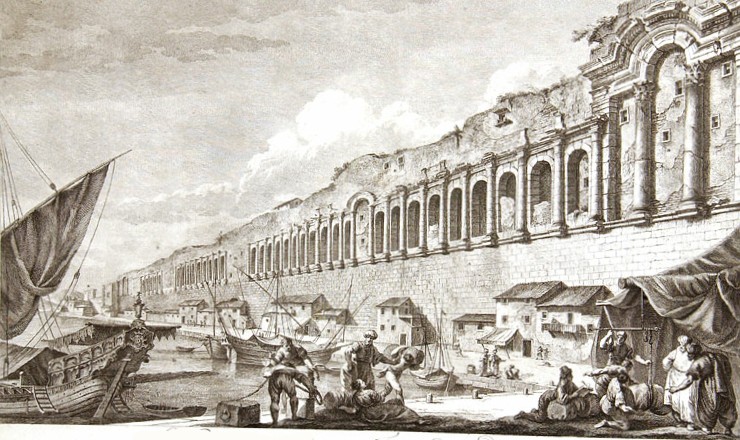 Waterfront of Emperor Diocletian's Palace in an etching by Robert Adam (1728-1792), a Scottish architect and engraver who published "Ruins of the Palace of the Emperor Diocletian at Spalatro in Dalmatia" in 1764

(July 2, 1675) Spalato seemeth to be a corruption of the word Palatium. For the Town that now is here, was the Palace of the Emperour Dioclesian. (..) It hath a very pleasing prospect, entring the Haven; one side of the Palace, now part of the Wall of the Town, first offering it self to the view. For it hath a Gallery of ancient Windows, adorned with Pillars, and Cornishes between each of them, of the Dorick-Order; except one at each end, which are larger, and of the Corinthian.
A journey into Greece by George Wheler, Esq., in company of Dr. Spon of Lyons - 1682
Emperor Diocletian came to power in November 284 AD under rather obscure circumstances following the assassination of Emperor Numerian by his father-in-law. Ten years later he decided to build a palace by the sea near Salona, his supposed hometown. Diocletian had humble origins and spent his life in the army, mainly in the eastern provinces of the empire (he visited Rome only once in 304); the palace he ordered building was very similar to castra stativa, the permanent quarters of the Roman legions he knew so well. Its side towards the sea was embellished by a very long open colonnaded loggia, while the others were characterized by defensive walls and towers. Castra stativa influenced the construction of other palaces including those of the Umayyad Caliphs in Syria and Jordan. 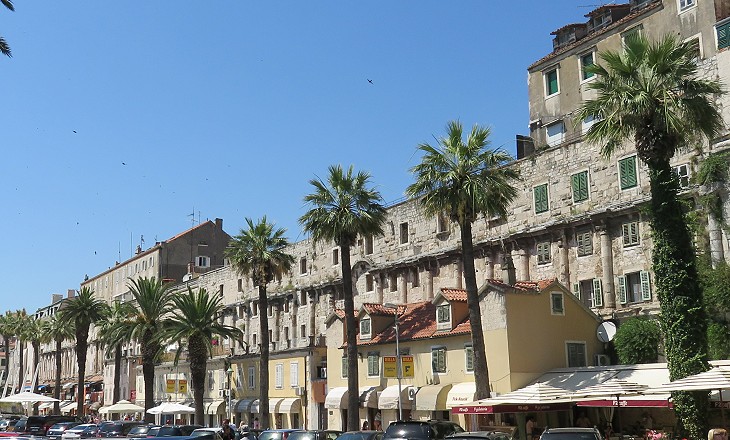 The small harbour shown in the etching by Adam has been replaced by a sea promenade with restaurants and parking facilities. Palm trees impair the overall view of the waterfront which has a length of 157m/515ft. Diocletian did not commission an exceptionally large building. Castra Albana, the barracks built by Emperor Septimius Severus at Albano had a length of 400m/1312ft and Terme di Diocleziano, the baths named after the Emperor in Rome were four times the size of the palace. 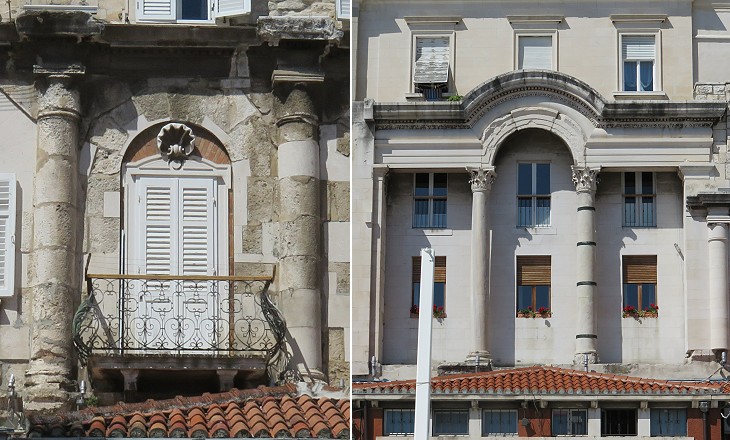 The uniformity of the colonnaded loggia was interrupted by three Serliana, a structure consisting of an arched lintel between two flat ones. It can also be found inside the palace and is the most interesting aspect of the building from an architectural viewpoint. Serliana became popular in the IInd century AD (in particular in buildings linked to Emperor Hadrian e.g. Hadrian's Temple at Ephesus and Villa Adriana at Tivoli) and again in Renaissance and Baroque architecture (e.g. Villa Lante at Bagnaia and Borromini's windows in Piazza Navona). 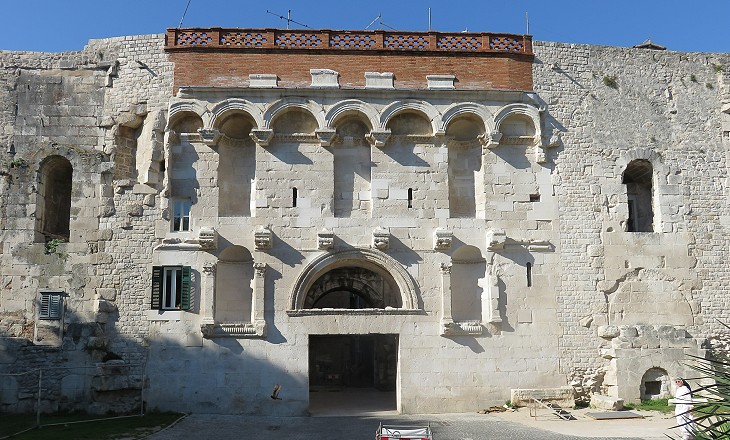 The North-gate was well adorned with Statues, as the Niches shew. The weaving together of the Stones of the Architrave of the great entrance of this Gate is very pretty. This was for Horses and Carts to come in at. The two lesser entrances, at each side of it, were for the people, on foot. Wheler
The waterfront does not have a monumental gate, but just a small opening in the wall. We can therefore assume that the gate on the opposite (northern) side of the palace was Porta Praetoria (the main gate of castra stativa). It is likely that the two niches at the sides of the entrance housed statues of Diocletian and Maximian, a general whom the Emperor associated to power in 285. The gate was protected by two (lost) projecting octagonal towers. The current names of the gates making reference to metals were used in the first Venetian descriptions of the town. Golden Gate is the name of a gate in the Byzantine walls of Constantinople. 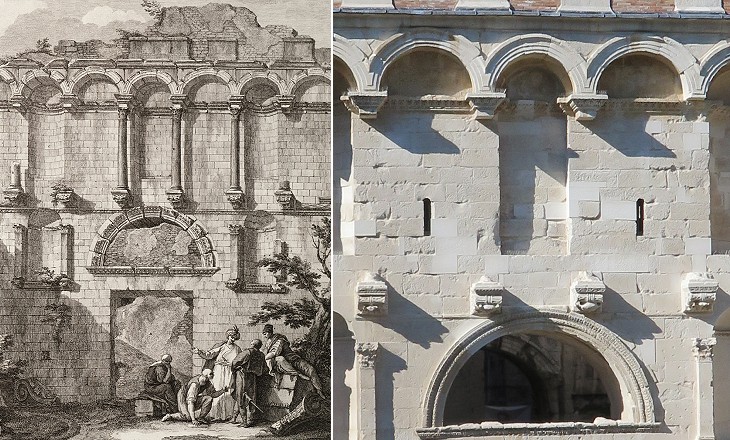 A white limestone quarried on Brac, an island near Salona, was used to face the brickwork structure of the palace. The limestone could be easily worked to obtain mouldings and reliefs. It was again used for the medieval and Venetian buildings of Spalato. Some dark granite columns were brought from Egypt to obtain a decorative contrast with the whiteness of the limestone, but they were probably removed during a XIXth century restoration of the gate. The series of small arches above the entrance is a forerunner of the narrow windows/niches of Byzantine buildings at Constantinople and of those of Venetian palaces. 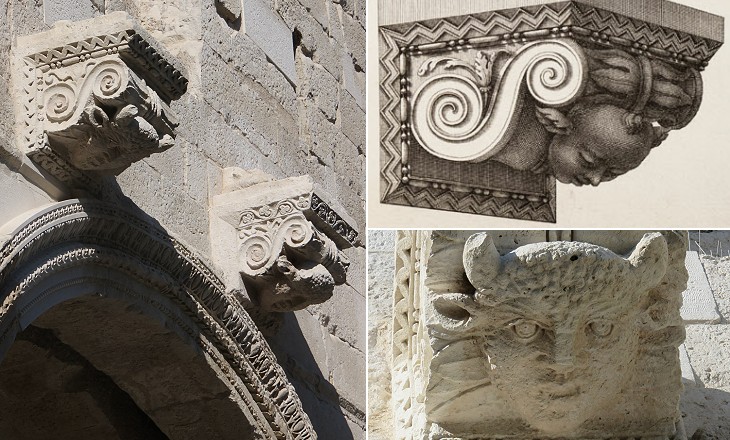 Porta Aurea: details of its decoration; another detail can be seen in the image used as background for this page

The statues which decorated the gate are all lost. Looking at the few remaining reliefs the conclusion is reached that they were not of a very high quality, although it is possible that they came from other locations, such as Afrodisias, where fine sculptures were made. Diocletian persecuted the Christians in 303-305 and because of this, most sculptures portraying him were destroyed after Christianity became the state religion. 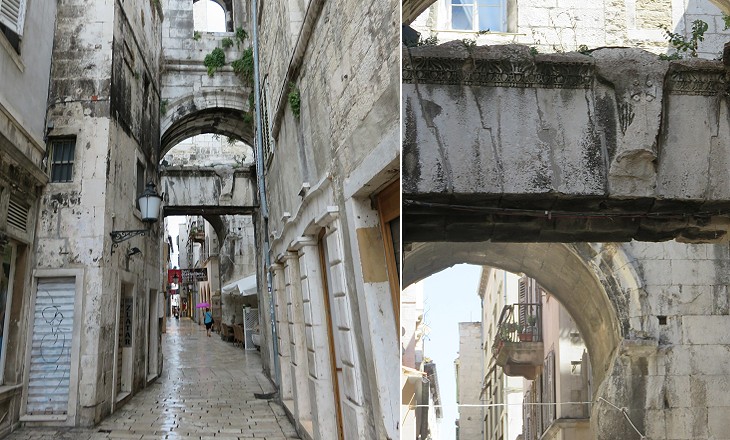 This Palace is square, and comprehends above two parts of three of the City; the rest, being a little oblong, added to the West-side, makes the whole oblong; but both one and the other are lately fortified, and encompassed by a Work of three Bastions Northwards, and two ranging in the same line with the Wall of the Palace, and the Old City fronting the Haven. Wheler
Venetian Spalato had approximately twice the size of the palace as it included a "new town" built to its west and having roughly the same rectangular shape and dimension. The two sections of the town communicated via Porta Ferrea (and two other very small passages). The western walls of the palace were incorporated into buildings of the medieval/Venetian town. 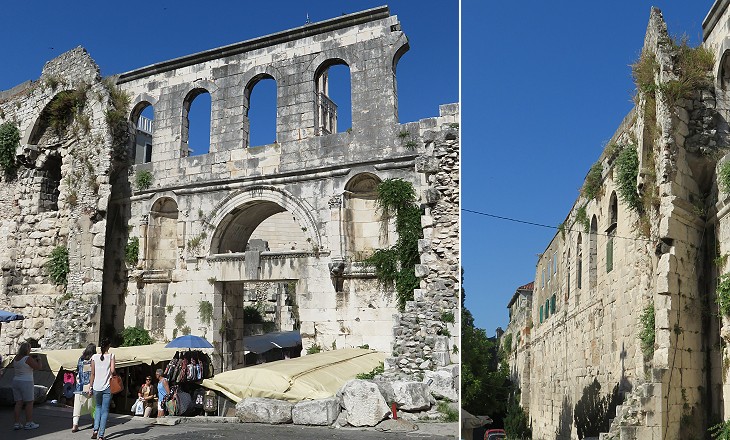 Porta Argentea is a partly modern reconstruction of the gate, which was walled up when Adam visited Spalato. This gate and Porta Ferrea had only a decorative purpose when the palace was built. The latter was situated on a narrow peninsula ending with a small hill and there was only one road linking it to Salona which began at Porta Aurea. The construction of towers at the sides of the gates was consistent with the military origin of the palace design. Eventually these "decorative" fortifications proved their effectiveness in the VIIth century when the inhabitants of Salona, unable to defend their very large town, sought refuge in the palace. 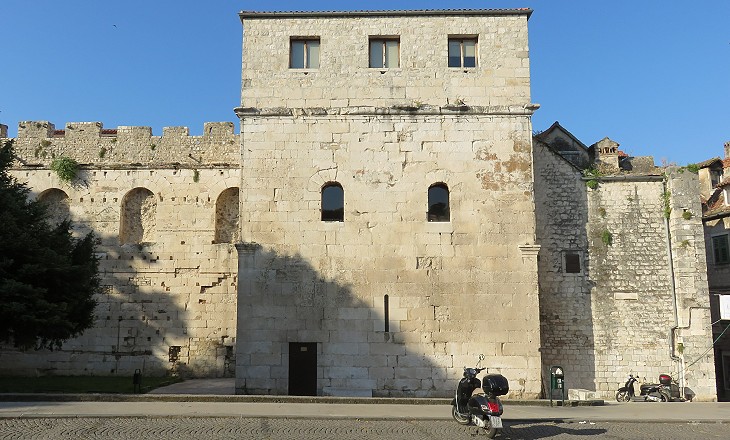 Square towers were placed at the corners of the palace. Three of them were restored and strengthened by the Venetians, who in the XVIIth century built brand new walls with spearhead bastions surrounding the old ones. In 1657 they complemented the fortifications of Spalato by building a fortress at Gripe, a small hill one mile to the east of the town. 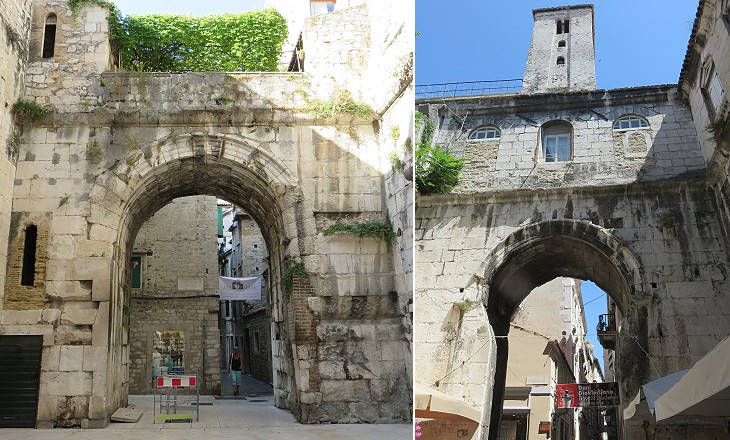