You may wish to see a page on the Lower Town first.

The older part of Ephesus was located at the top of a hill. The street which linked the two parts of the town is named after the Kouretes, the young men who according to the Greek myth clashed their spears against their shields and shouted to cover with their noise the cry of infant Zeus, lest Cronus might hear it. In more general terms their weapon-clashing drove off evil spirits and young men accompanied with their chants the processions to the Artemision.

The Library of Celsus was built during the reign of Emperor Hadrian and a temple was erected in Ephesus to celebrate the Emperor: the design of its entrance reminds the viewer of the Canopus of Villa Adriana, near Tivoli. Some columns of the temple are made of cipollino, a marble the Emperor liked very much and which was used throughout the empire in many monuments of the IInd century AD, e.g. Hadrian's Library in Athens. (left) Temple to Hadrian: decoration of the front arch showing Tyche, a goddess who was patron of towns and wore a crown resembling their walls (the image used as background for this page shows another detail of the decoration); (right) base of a statue of Emperor Diocletian in front of the temple with the dedication: B(onae) F(ortunae). / Optimo clementissimoque / principi, domino nostro / Diocletiano, invicto Aug(usto). (To Good Fortune. To the best and most clement ruler, our lord Diocletianus, never defeated Augustus)

The temple has an elaborate decoration of the time of Hadrian, but addition and changes were made in the IIIrd and IVth centuries. In ca 293 statues of the Tetrarchs were placed in front of the building. They are lost, but the dedicatory inscriptions have been found. It is interesting to note that Diocletian was referred to with words (Domino Nostro - Our Lord) which eventually were used for Jesus Christ. 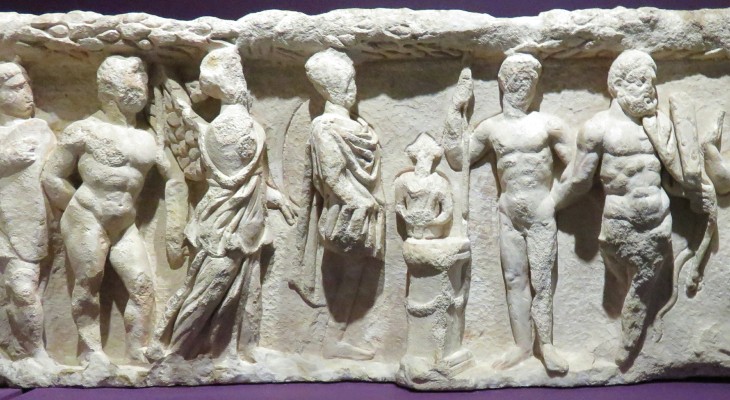 Archaeological Museum of Ephesus: detail of a frieze from the Temple to Hadrian (IVth century AD). It shows a Roman Emperor making a sacrifice in front of an altar decorated with garlands. The Emperor wears a military tunic and is crowned by a Nike, a winged Victory. On the right of the altar is a male figure, possibly Theseus, and next to him Heracles (you may wish to see another detail of the frieze portraying Emperor Theodosius and his family among the Olympian Gods)

Archaeologists found some reliefs which decorated the interior of the building and celebrated Emperor Theodosius. The reliefs must have been made before 389, because in that year the Emperor issued a series of decrees, which are regarded as the beginning of the Christian persecution of paganism. Greek inscription reporting a letter/decree by Emperors Valentinian, Valens and Gratian to Festus, governor of Ephesus (opposite Hadrian's Temple, an identical Latin inscription stands next to the Greek one)

The inscription was most likely made by order of Festus, the governor to whom the letter was addressed. It is dated 375 and it deals with the organisation of provincial games in Ephesus and other large towns of Asia. It is interesting because it shows that games were not yet regarded with hostility by the first Christian emperors. They realized that they were useful to maintain public order and gain popularity.
Some sort of public games/entertainments continued to be held well into the VIIth century in the Byzantine Empire. A Council held in Constantinople in 692 reiterated the Church condemnation of all games as stated in Canon 51: This holy and ecumenical synod altogether forbids those who are called "players", and their "spectacles", as well as the exhibition of hunts, and the theatrical dances. If any one despises the present canon, and gives himself to any of the things which are forbidden, if he be a cleric he shall be deposed, but if a layman let him be cut off. 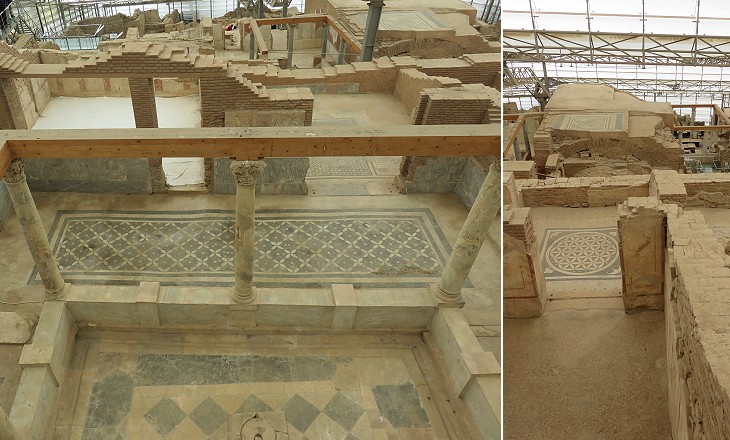 Terrace Houses: views from the upper houses showing some of the floor mosaics

A city of some 250,000 inhabitants does not vanish in a day. In 262 a major earthquake struck Ephesus, soon after the Goths raided the city, the Artemision was destroyed in the early IVth century, then the harbour silted, etc. All these events had an impact on the monuments of the city and archaeologists had to make a choice on which historical period was to be preserved. By and large their decision has been to bring back the city to the days Emperor Hadrian visited it. Archaeologists found evidence of six luxury Roman houses of that period beneath layers of later Byzantine buildings. They removed the latter and in April 2015 they were in the process of reconstructing the houses. The complex was built on three terraces and it had elaborate water and wastewater systems so that each of the six houses received clean water and could discharge its waste without interfering with the neighbouring ones. Each house had an independent entrance. They had roughly the same size, but at one point one of them was enlarged to the detriment of the adjoining one. 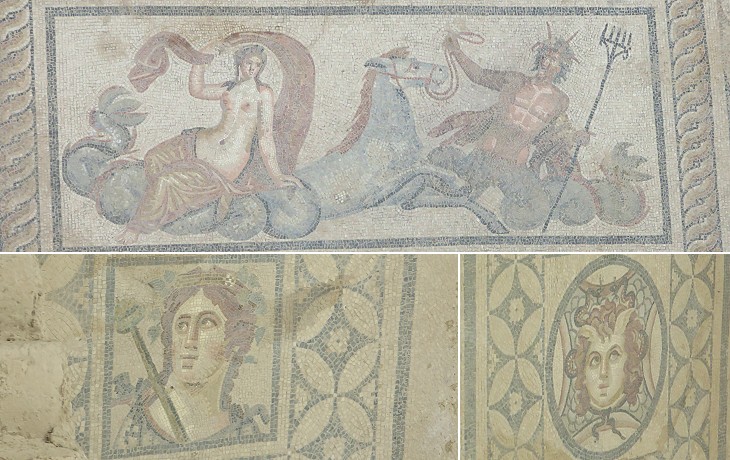 In general the floors were decorated with black and white geometrical mosaics, but some larger rooms had small coloured mosaics depicting popular subjects. It was not an apartment block similar to those found in Rome and Ostia, because the house layout was that of a domus, a Roman house built around one or two courtyards (you may wish to see the Houses of Pompeii). 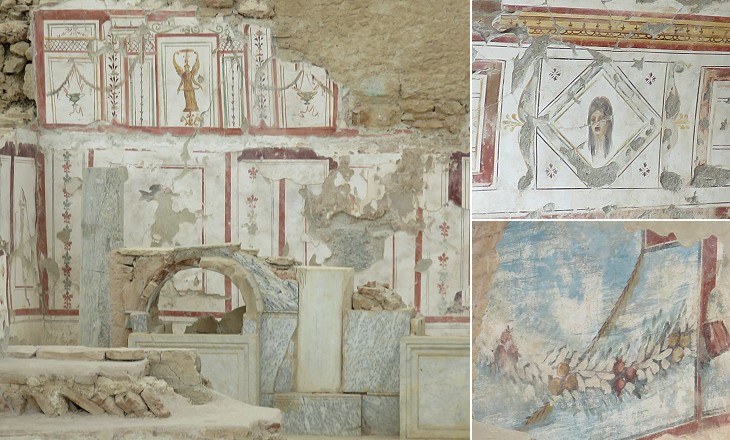 Terrace Houses: frescoes decorating the walls. They recall those at the House of Augustus in Rome

The luxury of the internal decoration was based on a wide use of coloured marbles and frescoes. It was proportioned to the real estate value of the property, which was situated on the main street of Ephesus and enjoyed (from the two upper houses) a commanding view over the Lower Town. 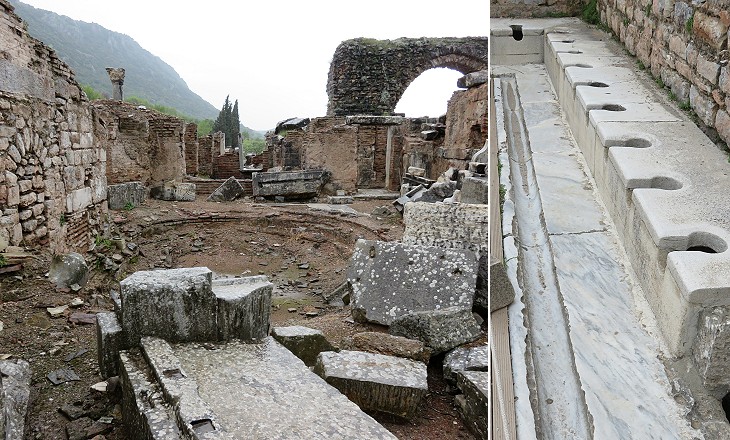 Baths of Scholastica (redesigned in the IVth century) near Hadrian's Temple: (left) one of the halls; (right) reconstructed latrines, similar to those at Ostia and Sabratha

The inhabitants of Rome spent many hours at the baths. It was an intrinsic part of their way of living. There was a fee to pay, but it was very low. Men, and to a lesser extent women, were accustomed to nudity. You may wish to read a page where Seneca describes a day at the baths.
Those of Ephesus did the same, but it all completely changed with the new faith: The infirm may take baths whenever it is advisable, but the healthy, and especially the young, should be given permission less often. (Rule of St. Benedict - 36.8 - early Vth century). Eventually the rule was made stricter and the monks bathed only on Christmas day and Easter, since regular bathing was known to invite carnal thoughts. Nudity was to be avoided for the same reason. 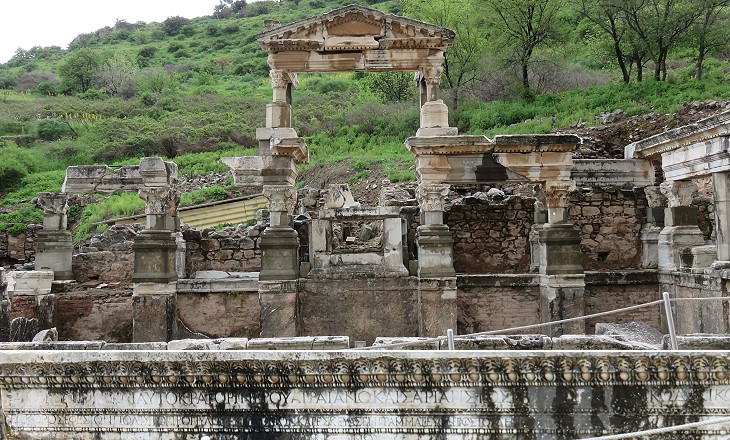 (above) Emperor Trajan's Fountain; (below) inscription celebrating the Emperor

Ephesus was supplied with water by aqueducts dating to the Hellenistic period which were supplemented by additional conduits built by the Romans. One of them, having a length of ca seventeen miles, ended with a monumental fountain along the Street of the Kouretes. In 2015 it was in the process of being reconstructed (in 2006 it was not even noticeable). 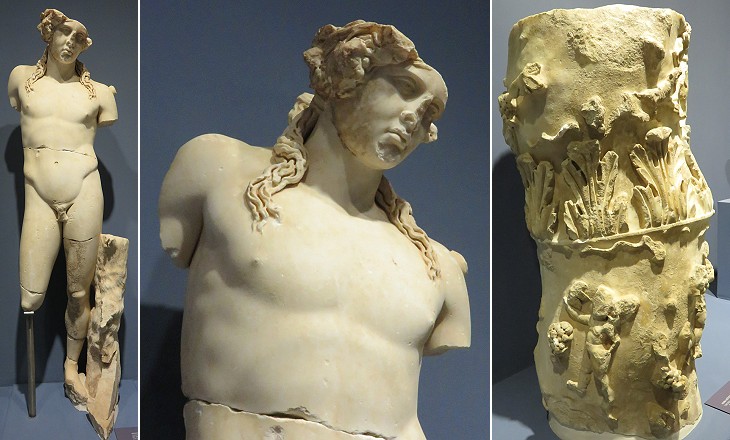 Archaeological Museum of Ephesus (from Trajan's fountain): (left/centre) Dionysus: (right) fragment of a column found near the statue

The central niche of the fountain was decorated with a large statue of Emperor Trajan, of which the head is at the Archaeological Museum. One of the side niches housed a statue of Dionysus. The God of Wine was portrayed in his usual state of dizziness. To a modern eye his look conveys a feeling of sadness and frailty as if the god had a premonition that his world was coming to an end. The IInd century AD was the century of Dionysus in the sense that statues of the god were in high demand for the decoration of monuments, perhaps even more than those of Apollo, the blockbuster of ancient statuary. You may wish to see a similar statue which decorated a fountain at Sagalassos. 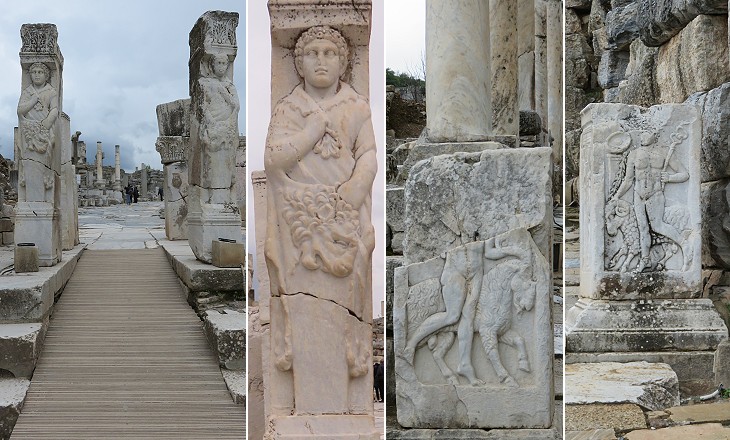 (left) Heracles' Gate in Street of the Kouretes; (right) reliefs at the beginning of the Procession Street

Street of the Kouretes is narrowed towards its upper end by a sort of gate made up with hermae (boundary markers portraying Hermes) decorated with busts of Heracles holding the skin of the Nemean Lion. The face however is clean shaven, whereas Heracles was a bearded hero. The unknown sculptor perhaps wanted to portray Hermes as Heracles. The hermae are dated IInd century AD and they come from another monument. They were used to narrow the street in the late IVth century or early Vth century. The opinion that they were part of a triumphal arch is not very credible, because the pillars are too small and too close to each other.
The Street of the Kouretes ended at an angle with the last section of the overall street which crossed Ephesus from the harbour to the Magnesian Gate. It is called Procession Street because of two reliefs of Hermes leading a goat and a ram to a sacrifice (the procession to the Artemision crossed the whole town, including this street).

One of the oldest Roman monuments of Ephesus was erected by Gaius Memmius, proconsul of Asia in ca 30 BC, to celebrate his grandfather Silla. It was modified in the late IIIrd century when one of its sides was turned into a fountain.
Excavations along the Street of the Kouretes have brought to light a row of shops preceded by a large pavement decorated with fine mosaics. 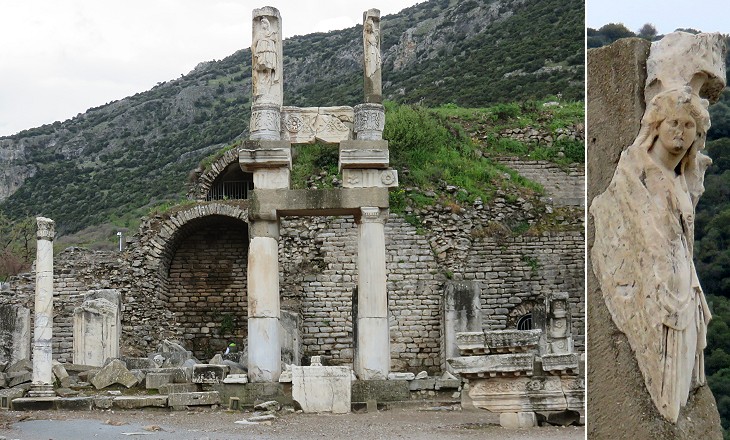 The cult of a Roman Emperor i.e. the dedication of a temple to him was subject to an authorization by the Roman Senate, which initially was granted to a few allied cities such as Pergamum. In 89 AD this privilege was granted to Ephesus where a temple to the reigning emperor was built in the Upper Town. When in 96 Domitian was killed and his memory damned, the dedicatory inscription was rephrased and made reference to Vespasian, Domitian's father and the building was referred to as the Temple of the Sebastoi (Emperors). It was decorated with friezes and a gigantic statue of Domitian which are now at the Archaeological Museum. 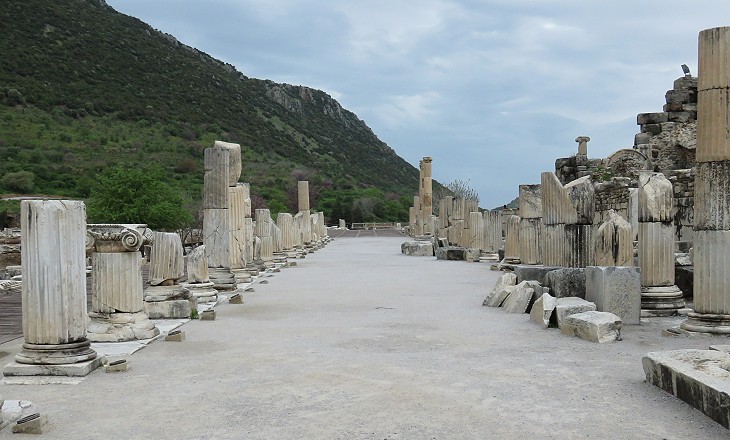 Portico of the Basilica

The Commercial Agora of Ephesus was situated in the Lower Town, not far from the harbour. A second Agora which is usually referred to as the State Agora existed in the Upper Town. It housed a large basilica which was used as a tribunal and was most likely built at the time of Emperor Augustus, because statues of the Emperor and his wife Livia were found there. 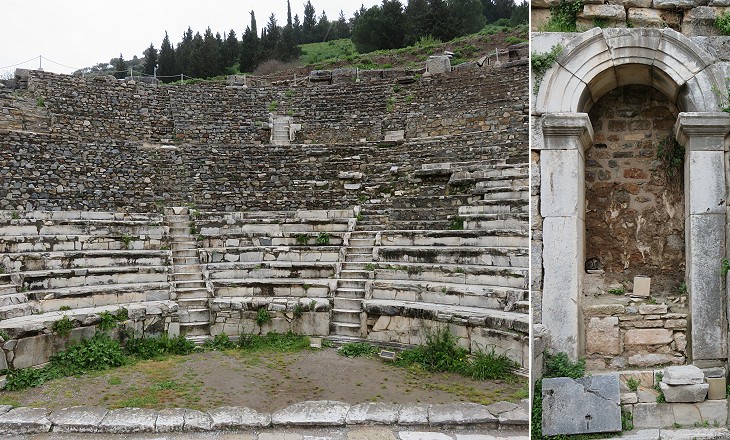 (left) Bouleuterion/Odeon; (right) a walled up passage to the upper seats

The Upper Town had an odeon, a small covered theatre for music and poetry contests. In origin it was built to house the council of citizens. It was enlarged/rebuilt in ca 160 AD by Publius Vedius Antoninus who held the highly respectable office of Asiarch, i.e. the pontiff of the Province of Asia, in charge of public games and religious rites and whose name is associated also with the construction of a Gymnasium. 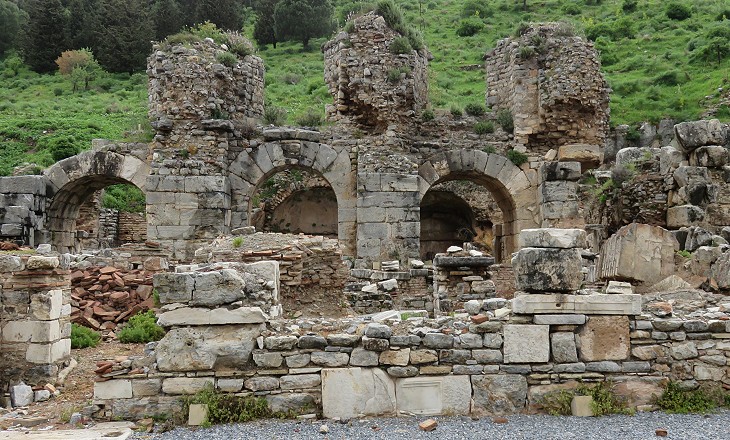 These baths were built in the IInd century AD and redesigned in the Vth century. They are named after an inscription mentioning Varius and they are situated very near the site of the Magnesian Gate at the northern end of the Upper Town. The gate has not been reconstructed (yet).