- Sebenico/Sibenik - The Town
(a sphinx at Diocletian's Mausoleum) 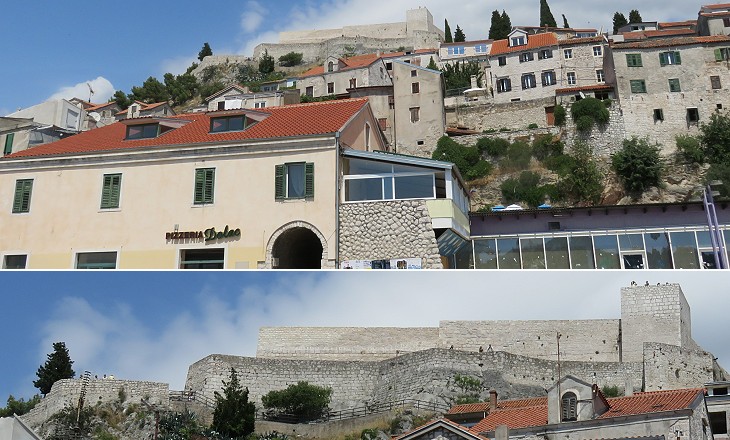 The city is an imposing mass of picturesque old houses piled up the mountain side, with the great white-domed cathedral in the middle, the massive towers of the castle of S. Anna in the highest point of the town, and two other old forts weathered to a rich mellow brown colour crowning the barren summits of two loftier hills in the backgrounds.
Sir Thomas Graham Jackson - Dalmatia, the Quarnero and Istria - 1887
Sir Thomas Graham Jackson (1835-1924) was one of the leading architects of his time. He visited Sebenico in 1885 and he wrote a very detailed account of its Cathedral, the main monument of the town. 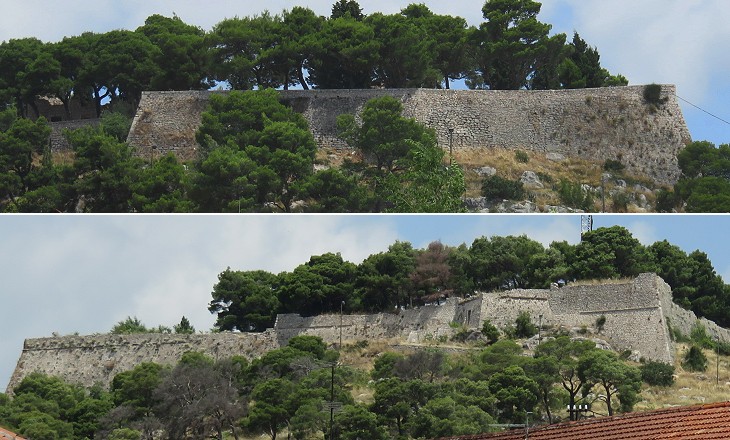 The two other fortresses mentioned by T. G. Jackson

In addition to the land fortresses the Venetians protected the sea access to Sebenico: I now embarked in a boat, and was rowed for about half an hour in smooth water to the mouth of the gulf of which the Fort of San Nicolo is a sort of padlock. As we approached, I recognised the architecture of the gate to resemble that of Sant' Andrea at the entrance of the Lagoon, and is surmounted by a huge lion, with the inscription: Pax tibi Marce Evangelista meus.
Andrew Archibald Paton - Highlands and Islands of the Adriatic - 1849
The original Venetian lion was smashed by the French in 1805, restored by the Austrians in 1824 and finally destroyed by Slav nationalists in 1932. 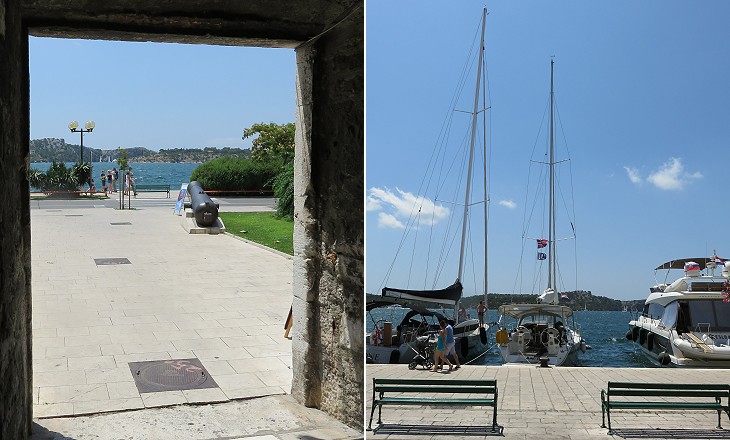 The quays were crowded with men and women in their national costume, and the port filled with gaily painted coasters with huge lateen sails, laden with wine casks, or crammed with peasants from the islands returning from market. There is no place on the coast more inviting to a painter's pencil than Sebenico. T. G. Jackson
Today the harbour has lost its former importance. The waterfront may not be as picturesque as it was in the XIXth century, but it is still a nice place to walk along. 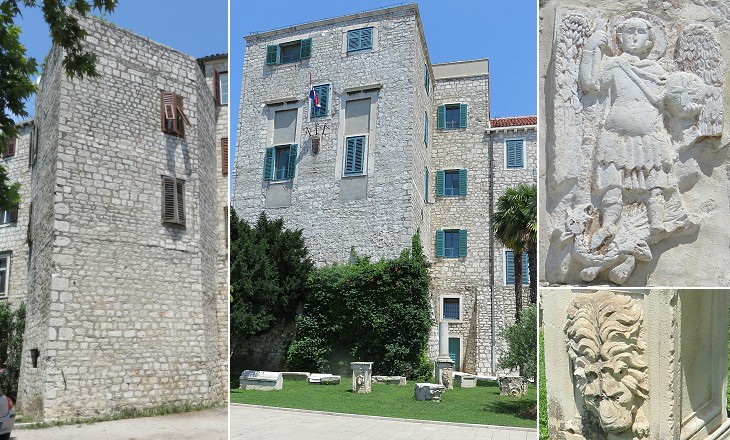 On Oct. 30, 1412 the inhabitants of Sebenico surrendered the city to the Venetians under certain conditions. Sebenico was fortified by the Venetians against the Turks, and under Venetian government she advanced rapidly in wealth and consequence. The principal event in her after-history is the invasion of Dalmatia by the Turks under Tekely, pasha of Bosnia in 1647, (during the War of Candia) when the place was besieged by the pasha and successfully defended by Adolf Degenfelt, who repulsed the enemy with a heavy loss of 4000 killed, besides 5000 who had been struck down by disease. T. G. Jackson
The maritime walls were much closer to the sea than they are today. Some of their towers have been turned into houses. (left/centre) Bernardi Bastion (1660) protecting the eastern side of the town; (right) relief portraying St. Michael which stood on the lost eastern gate. It is is attributed to Bonino da Milano who designed a beautiful chapel at Spalato

During the War of Candia, the Venetians upgraded the fortifications of Sebenico by building modern bastions, similar to what they did at Spalato. In the late XIXth century parts of the new enclosure were pulled down to facilitate the development of the town. 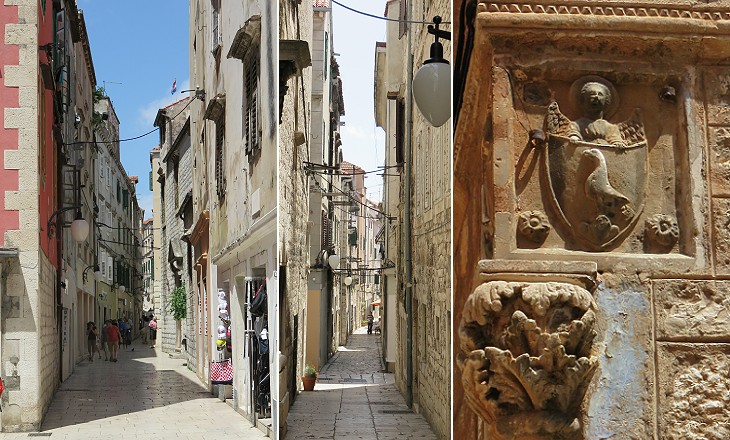 (left/centre) Main street; (right) detail of small palace. The image used as background for this page shows another detail of a building

The interior of the city is not less picturesque than the outside. Its little piazzas and its steep and winding alleys,  they can hardly be called streets,  abound in handsome doorways and windows of Venetian Gothic or of the early renaissance. Everything here is Venetian; not a single architectural feature that meets the eye can be referred to a date prior to the final Venetian acquisition of the town in 1412. T. G. Jackson 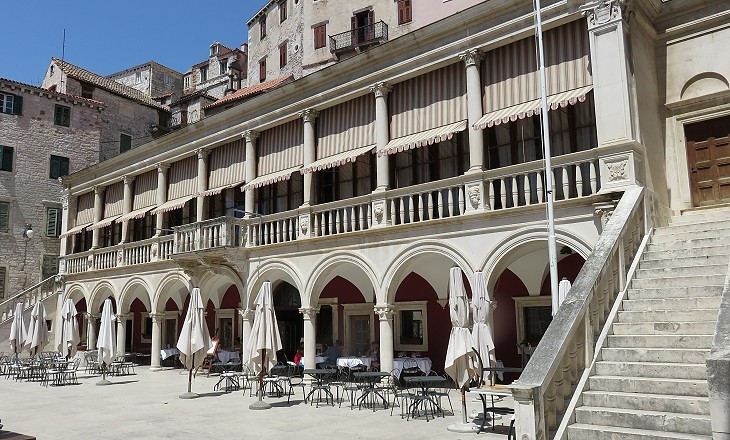 On the left is the cathedral, and on the right, built against the steep hill side, and overtopped by the buildings on the ascent behind, is the old loggia, a long arcaded building of two stories, now turned into a caffe below and a casino or club room and reading room above. It is dated 1552 and is a structure of some stateliness. T. G. Jackson 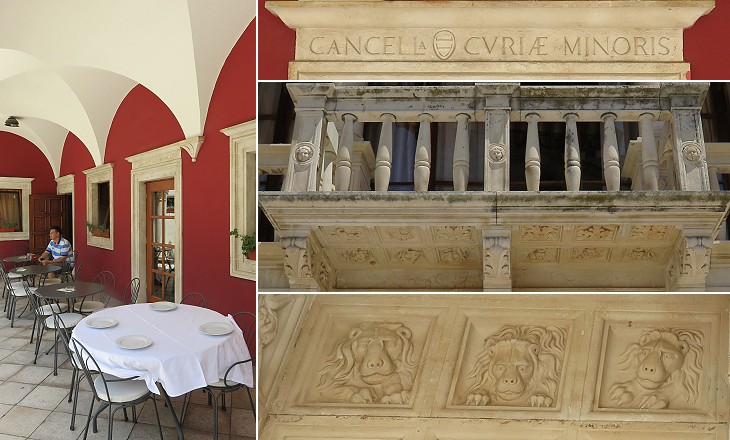 The Loggia housed Fabrica Ecclesia S. Iacobi, the body in charge of the Cathedral construction and maintenance and other offices related to the administration of justice (Cancelleria Criminalum and Cancelleria Curiae Minoris) or to brotherhoods (Scola Sacratiss. Corporis). Its design is attributed to Michele Sammicheli, an architect best known for the fortifications he designed in many Venetian towns (e.g. La Canea and Verona). 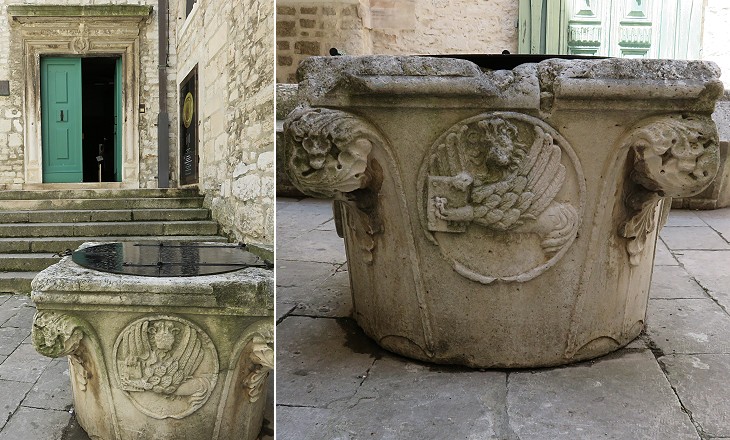 Venetian well above a large cistern near the Cathedral

At the present day Sebenico is one of those towns where party feelings run highest between the Latin and the Slav, and disturbances and crimes of violence frequently occur on these grounds of difference. Sebenico is gradually losing the reputation for politeness and high culture by which it was distinguished in the days of Fortis (Alberto Fortis - Viaggio in Dalmazia - 1774), and seems likely to become once more a Croatian city. T. G. Jackson
In 1932, similar to what occurred at Traù, almost all Venetian symbols were removed or destroyed.