Towards the end of the VIIIth century the power of the Byzantine Empire in Italy came to an end. Charlemagne in a series of campaigns between 788 and 798 nearly ended the Emperor's rule in the West. The Byzantines were left with a few coastal cities in southern Italy and with Sicily.
In 826 the Arabs or, as they were more often called, the Saracens occupied Crete and in 827 started the conquest of Sicily.
The coasts of Latium became vulnerable to attacks by the Saracens and for the first time the Pope had to defend Rome without asking for the intervention of the Emperor. Because of this threat between 842 and 843 Pope Gregory IV built a fortified village, pompously called Gregoriopolis, near ancient Ostia. 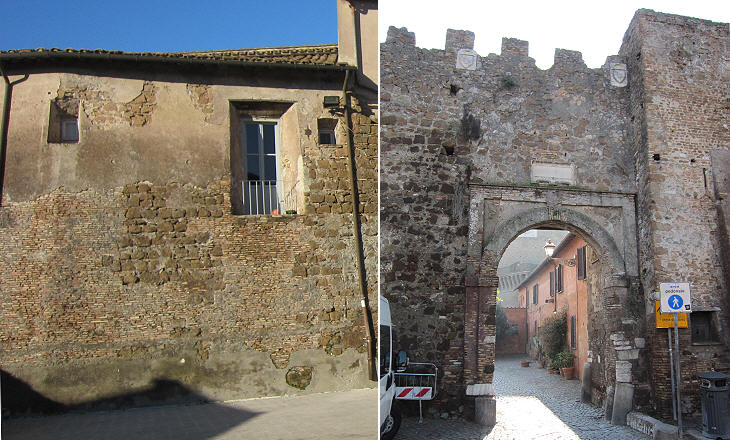 Walls and gate of Gregoriopolis

The walls and the towers of Gregoriopolis, notwithstanding the fact that they were reinforced in later periods, clearly show the limited resources which were available to the Pope. The Saracens landed in 846 and did not bother about Gregoriopolis: they went on towards Rome and sacked the Vatican which was outside the walls erected by the Emperor Aurelian. They were however so greatly impressed by the walls and the size of the city that no other attempts were made to attack Rome. 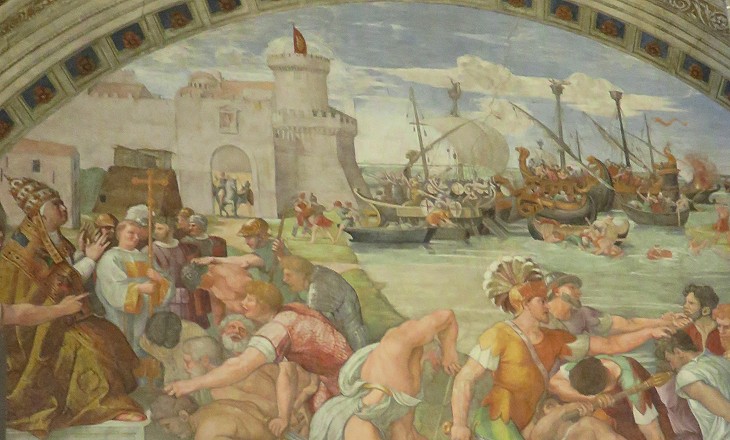 In 849 a fleet of ships from the maritime towns of Naples, Amalfi, Sorrento and Gaeta defeated the Saracens, but Gregoriopolis did not expand even when the threat of their raids faded out: a greater threat was constituted by malaria and most of the houses were empty. 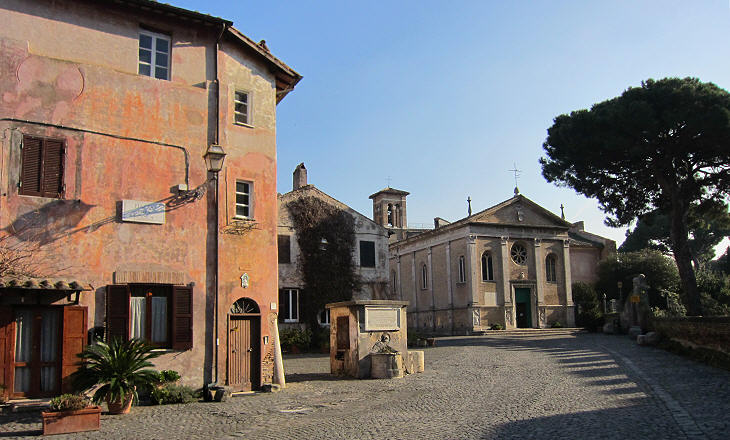 In the XVth century with the expansion of the Turks in the Mediterranean and the fall of Constantinople in 1453, the risk of corsair raids on the coasts of Italy became again very high. The importance of Gregoriopolis grew also because of the salt-works the popes had activated at the mouth of the Tiber. 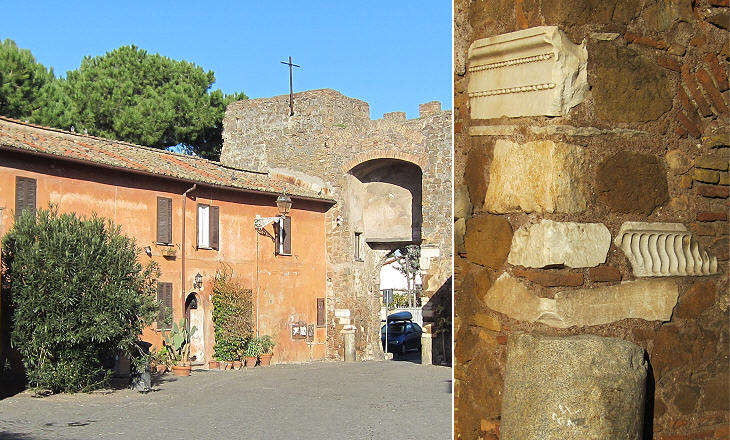 Houses of Gregoriopolis and stones and marbles from ancient Ostia

Pope Martin V and Cardinal d'Estouteville among others reinforced Gregoriopolis and brought a new population there. In 1471 Giuliano della Rovere was made cardinal by his uncle Pope Sixtus IV and he was given the administration of the area between Albano and the sea (for the record 7 out of the 35 cardinals appointed by Sixtus IV were chosen among his relatives). In 1483 Cardinal della Rovere undertook a plan for a large renovation of Gregoriopolis and most of what we see today (including the pieces of Roman reliefs walled in many buildings) belongs to that period. (left) S. Aurea and the Bishop's Palace to its left; (right) a relief of the façade

The church of S. Aurea by Baccio Pontelli is dedicated to a martyr of the IIIrd century, a young girl whose name Chryse was latinized into Aurea (golden). The church has the proportions of a classic temple. Cardinal della Rovere did not find it inappropriate for a church to be decorated with Roman war reliefs, similar to what he did at Abbazia di Grottaferrata. These reliefs were inspired by paintings discovered in those years at Domus Aurea in Rome. Other titular cardinals of Ostia embellished the church, but not many, because the population of Gregoriopolis was always very small (you may wish to see the 1698 baptismal font which was donated by Cardinal Alderano Cybo).

In 1503 Cardinal della Rovere was elected pope and he chose the name of Julius II, perhaps as a reminiscence of Julius Caesar. For this reason the castle he built in Gregoriopolis when he was a cardinal is now known as the Castle of Julius II. 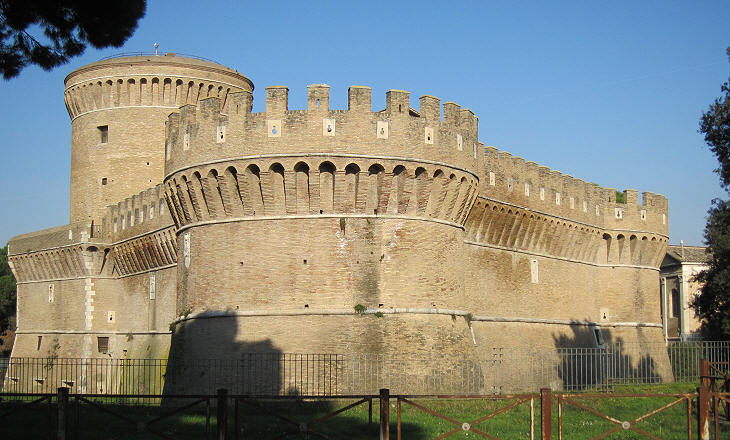 The Castle was designed by Baccio Pontelli and it had to fit within the limited space existing between Gregoriopolis and the river. That's why it has a triangular shape which is uncommon for such a fortification. 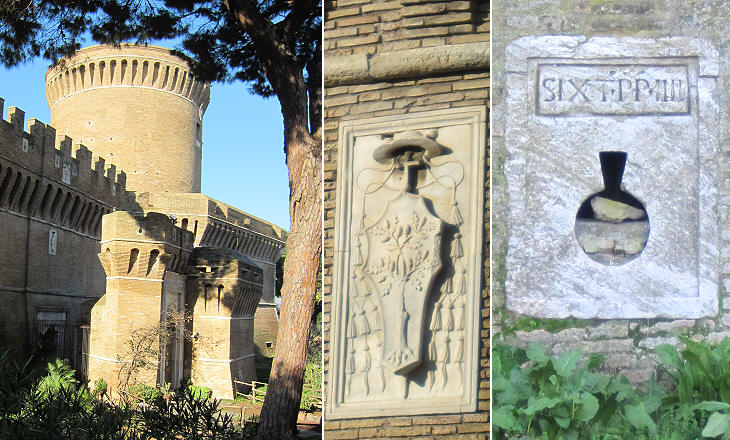 The fortress is made of three parts: a large tower (in part built by Pope Martin V), the castle itself and a little ravelin (outwork of fortifications, with two faces forming a salient angle). Several fine coats of arms of Cardinal della Rovere decorate the outer walls of the castle. The name of the cardinal as well as the name of his uncle can be read also on the embrasures. For the horizontal lines which highlight the different sections of the walls, Baccio Pontelli used parts of Roman columns from nearby Ostia. 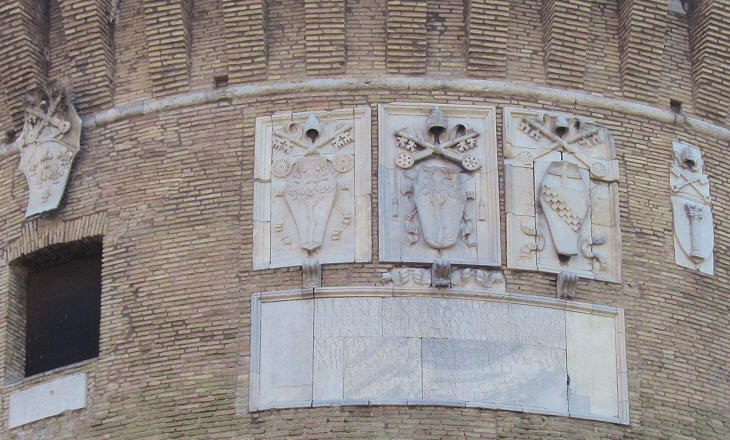 A large inscription over the main tower celebrates the completion of the castle which occurred in 1486 after the death of Sixtus IV and during the papacy of Innocent VIII to whom Cardinal della Rovere was a very influential advisor. The year of the completion is written both with reference to the Christian era (1486) and to the foundation of Ostia by Ancus Martius, fourth king of Rome, a sign of how the men of the Renaissance were tracing back their roots in the history of Rome. Most likely at the beginning there were only two coats of arms above the inscription, but when Cardinal della Rovere became pope he added his own coat of arms to those of Sixtus IV (left) and Innocent VIII (right). The little coat of arms to the far right belongs to Pope Martin V. The coat of arms to the far left belongs to Pope Paul III who, after the Sack of Rome in 1527, arranged for suitable papal apartments to be designed inside the fortress just in case he had to sustain an enemy's attack there. The inscription below tells us that Paul III had to partly rebuild the tower which had been struck by lightning.

Coats of arms of Popes Leo X and Pius IV

Other popes had their coats of arms celebrating initiatives they took to restore the fortress. It's worth noting the inscription below the coat of arms of Leo X where his being a Medici is highlighted (this is very unusual, some popes chose to put a reference to their country or town of origin). The inscription below the coat of arms of Pius IV expands on the works he did to rebuild a wall damaged by the war (the so called Guerra di Campagna in 1556) waged by his predecessor Pope Paul IV and it is phrased in a way which sounds very critical about that decision.

In 1557 an extraordinary flood caused a permanent deviation in the flow of the Tiber and Gregoriopolis and the castle lost their importance. Things worsened in 1612 when Pope Paul V dug again the artificial channel which in Roman times linked the river with the artificial harbour of Porto which was created by Emperors Claudius and Trajan to facilitate the supply of Rome. Traffic between Porto di Ripa Grande and the sea left the Tiber to make use of this channel and Gregoriopolis was abandoned. For nearly two hundred years it became a dead town and the castle was turned into a prison. Only the excavations of Ostia during the pontificates of Pope Pius VII and of Pope Pius IX in the XIXth century revived Gregoriopolis slightly and the castle was used to exhibit the first findings of the excavations. In 1884-1904 the marshy land around Gregoriopolis was reclaimed and this undertaking was celebrated by a little monument.