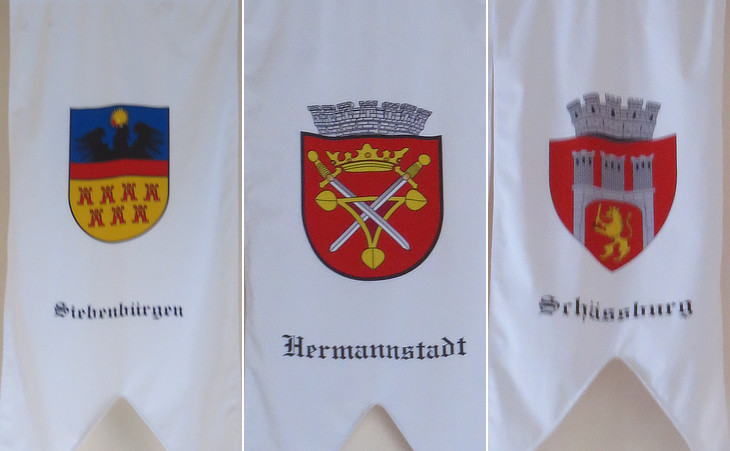 Transylvania's German name of Siebenburgen has been derived from the first seven "burgs", or fortresses, built by the German colonists, or from the seven once fortified towns of Hermannstadt, Klausenburg, Kronstadt, Bistritz, Mediasch, Muhlbach and Schassburg. (..) Hermannstadt (1410 ft.), one of the earliest Saxon colonies, lies on and near a hill on the river Zibin. It is now the capital of the county of the same name, the seat of a Prot. Saxon bishop and of a Greek-Oriental archbishop, and the headquarters of the 12th Army Corps. Of its 33,200 inhab. two-thirds are Saxons. Its once very strong fortifications are represented by some fragments of the wall and by a few towers near the Theatre.
1911 Baedeker's Guide Book of Austria - Hungary, with excursions to Cetinje, Belgrade and Bucharest.
In 2004 Romania submitted an application for Sibiu being included in the UNESCO World Heritage List. The following is an excerpt from the application:
Sibiu was colonized by Saxon settlers in the mid-12th century. (..) The earliest written records date from 1191. From 1366 onwards the city became known by the Saxon community as Hermannstadt. The overall form and shape of the city is medieval. Its evolving lines of strong fortifications, together with its characteristic street pattern, squares and building plots, developed and grew especially following the Tatar / Mongol invasion of 1241. Sibiu was the capital of the Saxon settlement in Transylvania. Strategically located, it was its most important fortified town. It was also its administrative, religious and economic centre. (..) The plan form and the architecture of Sibiu bear witness to the important political, religious and economic role that the city played for almost six centuries. Of particular note are the three interlocking squares of the upper town (Huet, Kleiner Ring, Grosser Ring), the succession of smaller squares in the lower town, and the many narrow streets, steps and covered passages that link them. The historic centre displays an extensive stock of Gothic, Renaissance, and Baroque architecture, as well as examples of late 19th to early 20th century date.
The application was not accepted, perhaps because the town has been modernized too much. A 1999 similar application for Sighisoara (Schassburg), another of the seven historical Saxon "burgs", was accepted because that town retains most of its historical aspect. 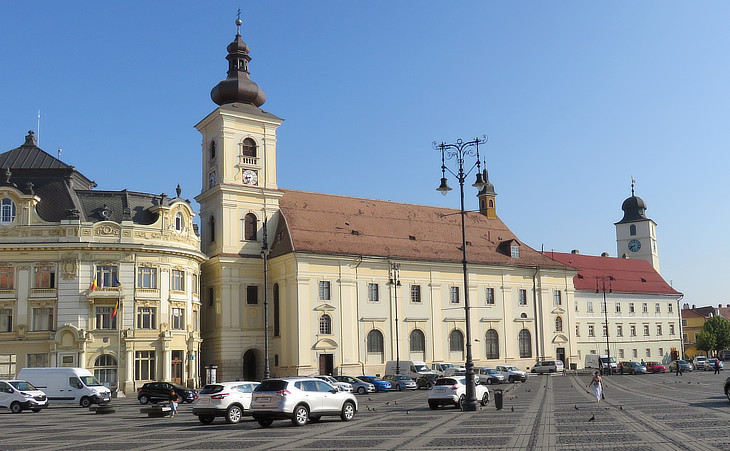 We arrived at Hermanstadt formerly Cibinium. (..) It is the capital of the province, a large and opulent town, full of inhabitants, situate in a campaign country. Hermanstadt contains fifteen thousand inhabitants. A theatre is opened only during the summer. The sight of handsome female faces at the windows was so new to us (the writer came from Ottoman Wallachia) that we seemed to be suddenly transported into another world. The Turkish Ambassador, with his suite, had entirely filled the principal inn: we therefore drove to a second, where we were well treated.
Edward Daniel Clarke - Travels in various countries of Europe, Asia and Africa - 1817-1824
Hermannstadt itself, the capital of the Saxon-land, though tolerably well built, and possessing a handsome square, has a dull and stagnant appearance.
John Paget - Hungary and Transylvania - 1839
The central point of the old town is the Grosser Ring; on the N. side are the Roman Catholic Church and a Tower of 1588, between the Grosser and the Kleiner Ring. On the W. side is the Brukenthal Palace built by Baron Brukenthal, Governor of Transylvania in 1777-87, and now the property of the Protestant gymnasium of Hermannstadt. It contains several collections. Baedeker
In 1906 the houses next to the tower of the Jesuit Church were demolished in order to build the Art Nouveau palace of the Land Credit Bank. Today it houses the new Town Hall of Sibiu. 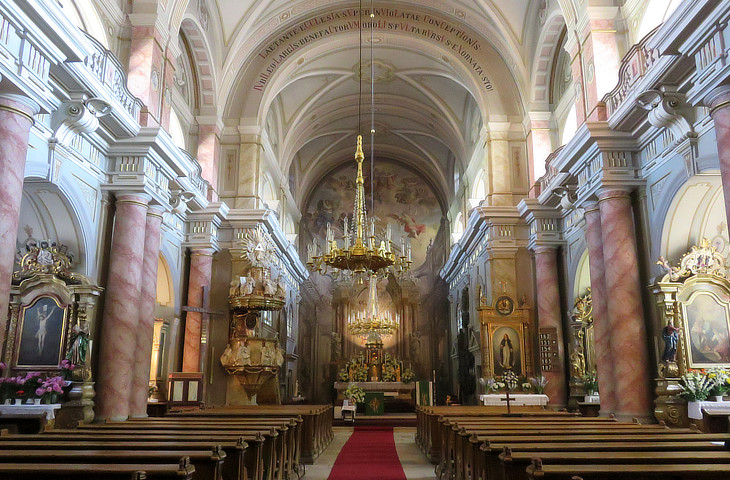 Jesuit Church: interior; the round apse with the canopy is an optical illusion, similar to what can be seen in other Jesuit churches, e.g. the dome of S. Ignazio in Rome

There are three monasteries in the town for men, and one convent for women. The monasteries are, one for Ex-Jesuits, one for Catholics of the Franciscan order, and one for Greek monks of the order of St. Basil. There are, besides, two public schools; one for Protestants, and one for Greeks. Clarke
The Austrian Emperors and in particular Charles VI promoted the recatholicization of Hungary and Transylvania and the Jesuits had a major role in this effort. Jesuit churches were characterized by their rich decoration. You may wish to see Jesuitenkirche in Vienna and Chiesa del Gesù in Rome. Brukenthal Palace: a detail of its decoration is shown in the image used as background for this page; see the portal in the introductory page; you may wish to see some palaces of the same period in Vienna

We went early to visit Baron Bruckenthal; and were employed the whole morning in the examination of his collection of Pictures; perhaps the largest in the possession of any private individual in Europe. It contains many works by all the best masters; and they are indisputably originals. Clarke
The first objects we visited on the morning after our arrival were the museum and gallery of Baron Bruckenthal. It has always been one of the peculiar privileges of greatness to choose great instruments for effecting its purposes, and in none was this more remarkable than in Maria Theresa. This prudent queen, setting aside all the prejudice which exists in Transylvania against the Saxons, raised for the first time in the history of that country, a Saxon Baron Bruckenthal to the supreme administration. Hermanstadt became the seat of Government. Bruckenthal built a splendid palace; formed a large collection of pictures, and a very valuable library of thirteen thousand volumes, and at his death bequeathed the use of them to the public. We found the pictures scarcely deserving the high character we had heard of them, but they are quite as good as those found in many second-rate German and French towns, and they are well worth attention, as they form the only collection in the country. The library is in excellent order, and most freely open to all comers. Paget 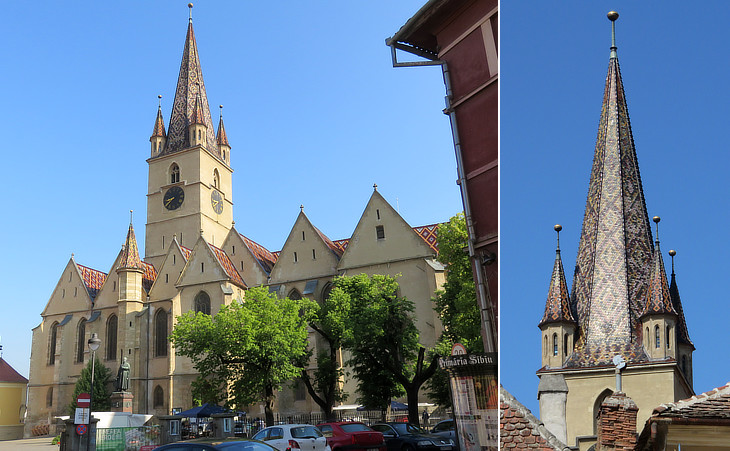 They all spell and write German as it is now spoken. Here as elsewhere, Luther's Bible has formed the language after its own image, but even in reading the Bible they translate it into the common dialect. Paget
The Protestant Church dates from the 14-16th cent. (..) The tower 243 ft. high. with corner-turrets, commands a fine view. Baedeker
The church was built on the site of a Romanesque one of the XIIth century. The four small turrets around the main one, the tallest of Transylvania, indicate that the magistrates of the town had the right of sentencing to death. They can be noticed also in other monuments of Transylvania, e.g. Katharinen-Tor at Brasov and Stunden-Turm at Sighisoara. 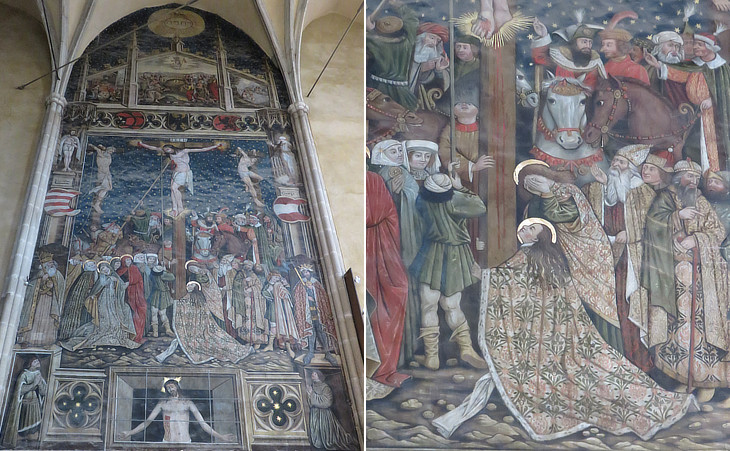 On the wall of the choir is a large mural painting of the Crucifixion, with numerous figures, by Johanu of Rosenau (1445), one of the best specimens of Transylvanian art. Baedeker
The painting shows Italian and German influences. Until the conversion to the Lutheran faith, which was carried out from Sibiu in 1545 for the entire Transylvanian-Saxon nation, the church and city were fully integrated into Catholic religiosity. Post-Reformation overpaintings have changed the original composition, especially its top part. The Crucifixion scene, thanks to its compatibility with the contents of the Lutheran creed, survived the Reformation relatively unchanged. The church contains tombstones of old Saxon counts, burgomasters, etc. Baedeker
Starting with 1496 the Church served as a burial place for mayors and other magistrates of Hermannstadt. In 1796 burials in the church were prohibited, but an exception was made in 1803 for Baron von Brukenthal. The tombstones that covered the graves were dismantled from the church nave in 1853 and incorporated in the walls of the church courtyard, thus obtaining a unique gallery of 67 tombstones. Many of them are pretty well executed and they portray local officers who were aware of the fashion of the time, showing that the town was not a provincial one, notwithstanding its remoteness from the cultural centres of Europe and its being under nominal Ottoman suzerainty for more than a century. 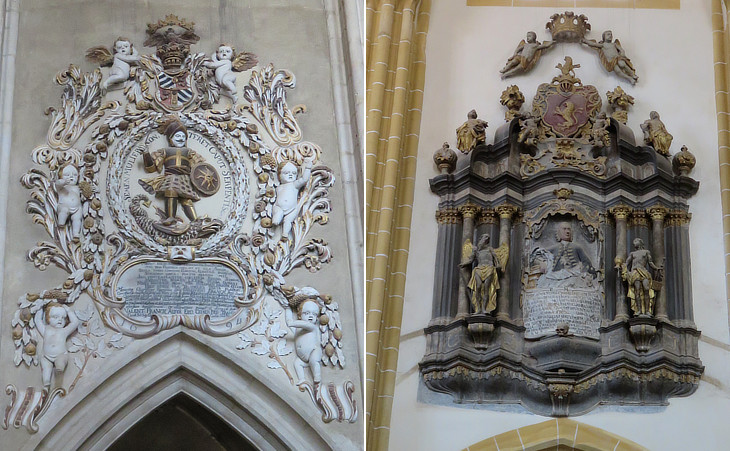 Evangelical Church: funerary monuments on the walls of the church 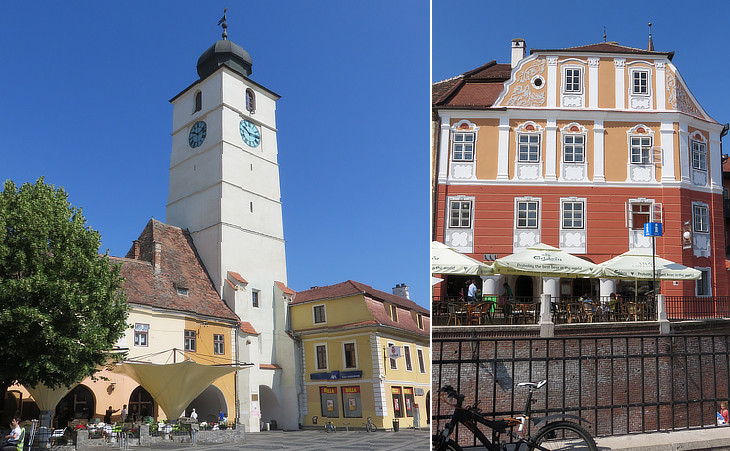 Hermannstadt is the head-quarters of the commander-in-chief of the troops in Transylvania, and of course of the staff. Several departments of the Government, as the Customs, Post-super-intendence, etc., are located here, but notwithstanding these helps, Hermannstadt is not what it was. The overland trade through Wallachia has almost disappeared, and with it the best days of the town. Paget
The Rathaus, originally the fortified dwelling of a patrician, purchased by the town in 1445 has interesting architectural details. It contains the Archives of the "Saxon Nation" and a well-arranged armoury. Fine door of the beginning of the 16th century. (..) Since 1867 Transylvania has been in legislative and administrative respects incorporated with Hungary. Baedeker The large portal displays the coat of arms of Mayor Johann Reussner junior (d. 1654). It is accompanied by the year 1652 and by the monogram EN (Elias Nicolai), a sculptor who was active in Sibiu in 1638-1654. The inscription in the small portal contains moral maxims e.g. in the last line "quod tibi non vis fieri alteri ne feceris" i.e. do not treat others in ways that you would not like to be treated. 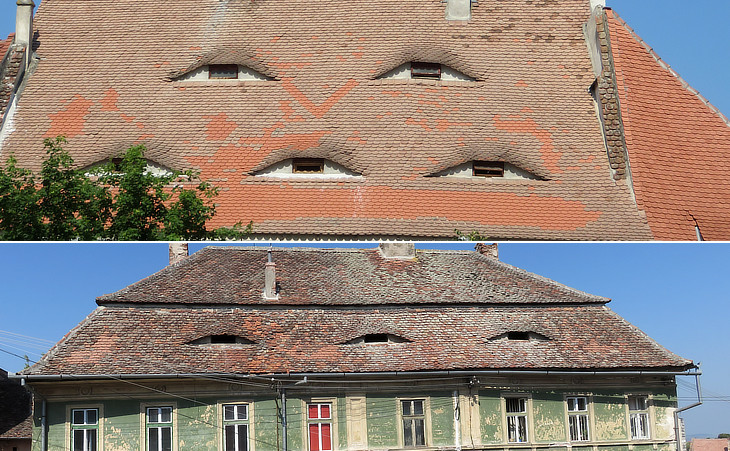 Houses with "eyes": (above) Haller House; (below) historical building in the street leading to the lower town

The plot shapes, layout and organization of the larger merchants' houses in the upper town, with their large courtyards behind, are also distinctive. The evolution of the city from its initial strategic stronghold protecting a rural settlement to a mercantile and artisan centre and powerful regional capital city is expressed in the important collection of vernacular buildings, to be seen especially in the lower town. From the application to UNESCO. 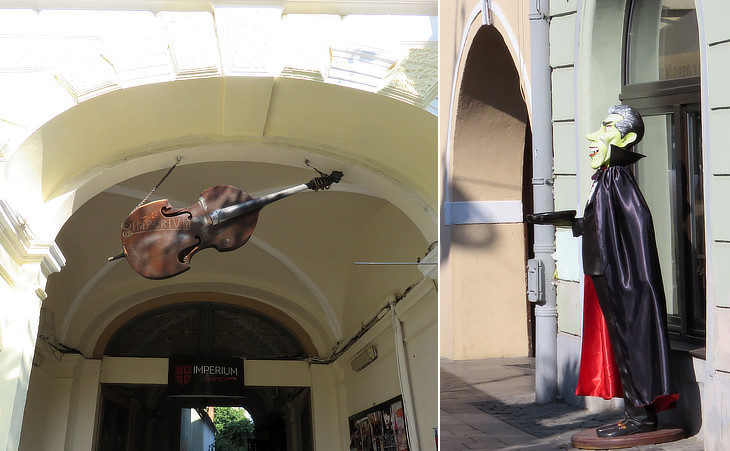