The campo, or plain of Scio is a very beautiful country, about two leagues long, and a league broad, but it consists entirely of country houses and gardens walled round, great part of them are groves of orange and lemon trees; and the houses are so near to one another that it appears like the suburb of a town; and from the sea it looks almost like one continued city.
Richard Pococke - A Description of the East and Some Other Countries - 1745

The countryside at Kampos

The mastic tree, or as it is sometimes called the lentisc, they say, is of two sorts, the wild and the domestic tree: What they call (..) the wild produces mastic, but not so good as the other; and of this the female, which has larger leaves, and is a brighter green, produces the best mastic; and that which comes first from all of them, is better than that which drops afterwards, when the tree has lost its strength. (..) They make holes in the trunk; (..) in three days the gums begins to run, and they let it lie and dry for about eight days ; it is then hard enough to handle, and they take it up. The mastic was formerly sent to Venice, but is now exported only to Constantinople and Smyrna; it is chewed only by the Turks, especially the ladies, who use it both as an amusement and also to whiten their teeth, and sweeten the breath, on which account it is much used by those of the grand signor's seraglio. Pococke
The wealth of Scio (Chios) was (and in part still is) linked to the lentisk, a small tree exuding a gum. The tree Lentiscus Pistacia grows in most of the Mediterranean countries, but only in Scio its gum solidifies: this evergreen is called a mastic tree and it was known to the ancient Greeks and Romans: in a way it was the chewing-gum of antiquity. Maona Giustiniani promoted farming on Scio and in particular in Kampos, a plain to the south of the town.

There are also in it several gardens of mulberry trees for silk worms; those that are the most beautiful have a walk in the middle, and to the right and left from the house, with square pillars on each side, and seats built between them of hewn stone; the pillars support a trellis-work, which is covered with vines, and on the spaces on each side there are groves of orange and lemon trees: Some have chapels in their gardens, with a family vault under them. Pococke
Each farm was surrounded by walls, often rather high, having the objective to minimize the erosion of the soil due to the meltemi, the strong northern wind which blows on the Aegean. The walls and the buildings were erected making use of thymiana, a local stone with warm yellow and red tones.

A farm well and a gate

Of those parts of the island, in which cultivation is practicable, almost the whole may be said to be a garden. The deficiency of water is supplied by a large wheel, to which buckets are attached communicating with a cistern, and worked by an ass or mule. By narrow channels the water is regularly diffused, and the health and vegetation of the plants supported to the utmost luxuriance by this rustic system of hydraulics.
James Dallaway - Constantinople Ancient and Modern with Excursions to the Shores of the Islands of the Archipelago and to the Troas - 1797
Each farm had a deep well to intercept the flow of abundant underground water. Overall the layout of buildings, gates, boundary walls, etc. is still very consistent and the majority of the modern additions respect the old architectural patterns.

The farms of the Kampos plains could be easily protected from corsar raids by the Genoese ships in the harbour of Scio, but the southern tip of the island was exposed to this risk. For this reason the peasants lived in fortified villages, which have retained their peculiar layout.

Walls and only gate of Mesta

The villages of the Campo, as well as most of the others in the island, which are sixty in all, are really like towns; the houses are built together, and consist of several narrow streets, having gates at the entrance, and many of them a castle in the middle, especially the villages of Mastic; which manner of building in the country seems to have been introduced as a defence against the incursions from the continent, which were often made when this island was not under the same government. Pococke
The villages did not have walls, but the external houses were lined up to form a barrier. They did not have doors or windows on this side (now they have been opened). At each corner of the village there was a tower and there was only one gate giving access to the village. This structure is still very well preserved in Mesta.

The defence of Mesta was entrusted to the villagers themselves. The corsairs who had managed to penetrate inside the village found themselves in a maze of very narrow alleys covered by archways through which the villagers could easily move and repel the assailants. This layout is impressively similar, although the buildings of Mesta are not as high, to the carrugi, the very narrow streets of the medieval quarter of Genoa. The fortifications of the villages were completed by a large tower at the centre of the village. It could be reached only through very narrow streets and it did not have openings at the ground floor level. The tower of Mesta has been pulled down to provide the village with at least one open space, but that of nearby Pirgi still exists. 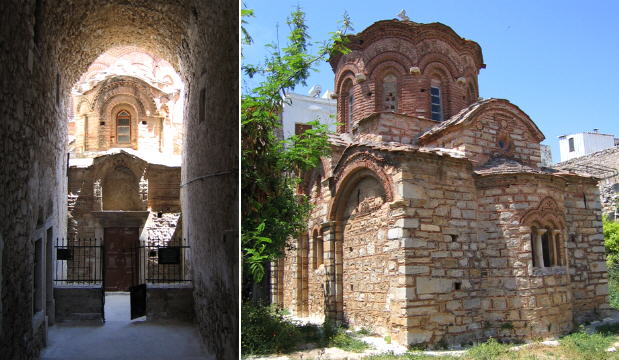 These villages have great privileges ; they pay no rent, only a certain quantity of mastic to the grand signor, which I was informed is yearly five thousand and twenty okes of four hundred grams each; and they are subject only to an aga placed over them; are permitted to have bells to their churches, being all Christians, and may wear white fashes to their turbants. Pococke
Even the fine church of Pirgi was accessible only through an archway (today some buildings have been pulled down and its rear part is visible).

Houses with a "graffiti" decoration at Pirgi

Another link to the Genoese period can be noticed in the decoration of the houses of Pirgi, a kind of graffito, a technique developed in Italy during the Renaissance. Today the decoration, which once was based on very simple geometrical shapes, and which can still be seen on a few buildings, includes many varieties of patterns. The technique too, is no longer the original one.

Many of the present inhabitants are proud to own their descent from the Casa Giustiniani, or Grimaldi, anciently noble. Dallaway
Some inhabitants of Pirgi pretend to be the descendants of Columbus, as they believe that the great Genoese navigator was born in Scio.