If you came to this page directly, you might wish to read a page with an introduction to this section or read J. L. Burckhardt's account of his visit to Petra first. 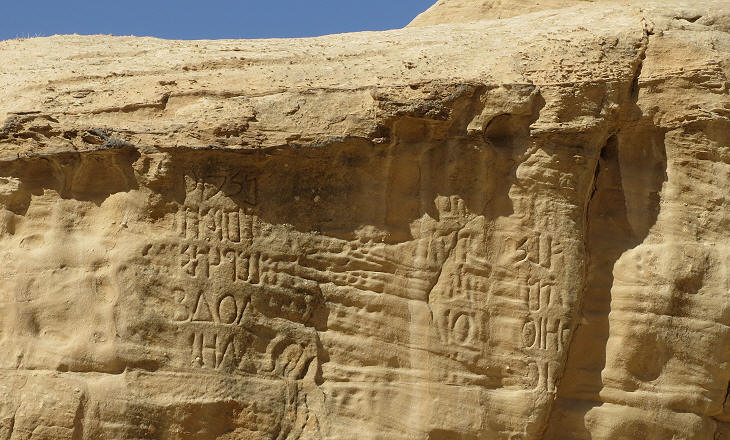 Inscription in Nabatean (above) and Greek (below) near the Djinni tombs

Petra retains an enormous number of monumental tombs which were meant to celebrate the achievements of the dead and yet we do not know for whom they were built, because very few inscriptions have been found. Archaeologists believe that the façades (or part of them) were plastered and inscriptions were painted, because where inscriptions were carved, erosion has not completely cancelled them. The Nabateans used an alphabet derived from the Phoenician one (you may wish to see an inscription at Leptis Magna in Punic/Phoenician alphabet) which was similar to the Aramaic/Palmyrene one. 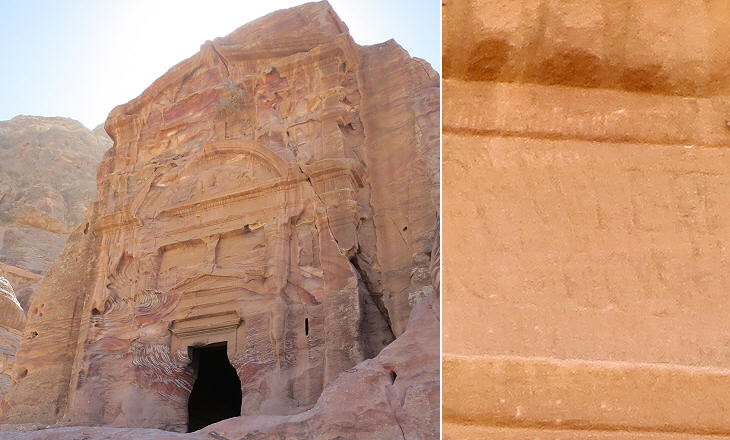 Romans made carved inscriptions a form of art and the son of Sextius Florentinus, governor of the province of Arabia Petraea in ca 126-29, had a Latin inscription carved on the tomb he dedicated to his father. Notwithstanding the impact erosion had on the architectural elements of the tomb, the inscription is still readable. It indicates that monumental tombs continued to be built at Petra during the IInd century AD. The fact however that the tomb is located in a rather hidden location on the cliff to the east of the town is seen as evidence that the most visible part of the cliff was already occupied by the "Royal Tombs". 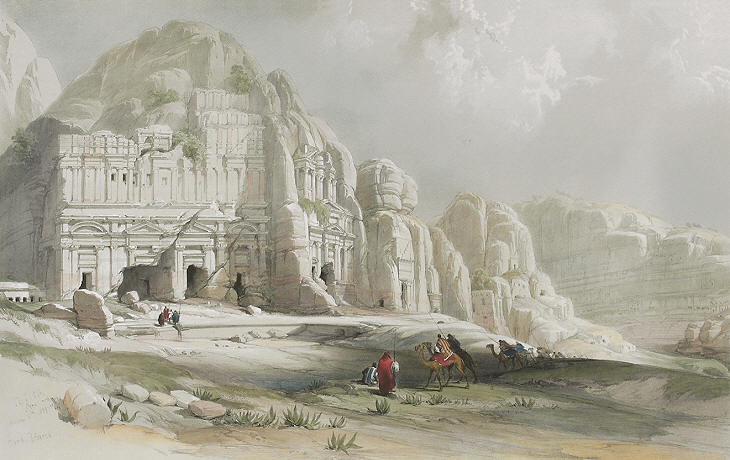 David Roberts' drawing of "The Eastern End of the Valley"

Four tombs on the eastern cliff have been named "Royal Tombs" because of their size and decoration. Archaeologists have found inscriptions on papyruses at other locations and they have been able to establish the chronology of Nabatean kings, but the "Royal Tombs" cannot be linked to any of them in particular. 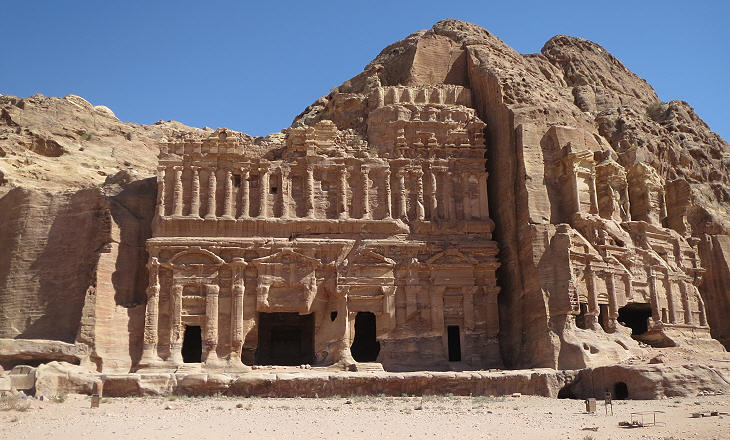 Carved rocks in the shape of temples and used as tombs are not unique to Petra: Kale Kapi in north-western Turkey is a spectacular tomb carved in a hard rock. Many towns of Lycia in south-western Turkey, such as Kaunos and Myra, have high cliffs housing temple tombs, yet the "Royal Tombs" of Petra have an enhanced theatrical element which makes them more impressive. The Palace Tomb, the largest one, recalls the proscenium, the wall behind the stage of Roman theatres (e.g. that of Sabratha). As a matter of fact there are doubts whether the Palace Tomb was actually a tomb. 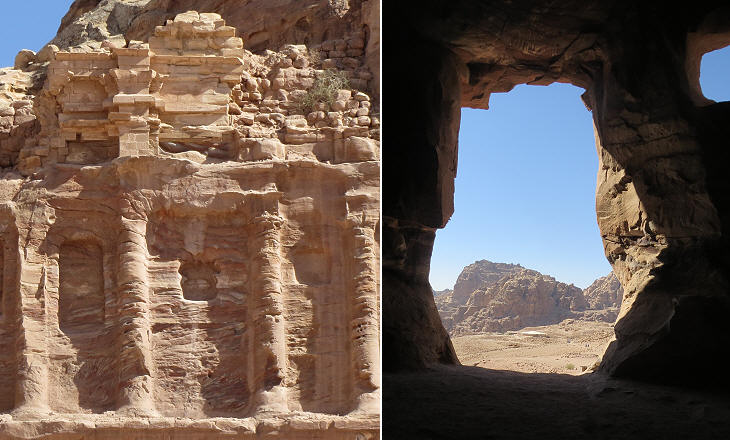 Royal Tombs: Palace Tomb: (left) detail of its upper right end which was not cut into the rock; (right) view from the interior towards the town

The tomb façades were very large to make them visible from the town which was situated at some distance. When the cliff was not high enough the size of the façade was increased by masonry. The Royal Tombs are best seen in the afternoon, when direct sunlight enhances the pink colour of their stone. 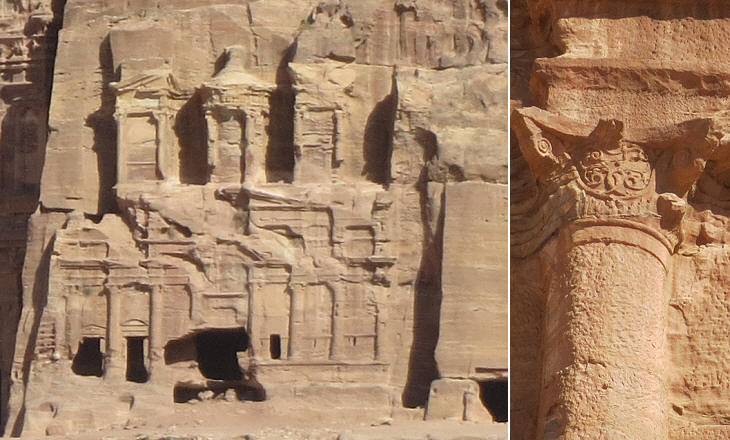 Burckhardt noted a tomb with fine Corinthian capitals in his account and he most likely had in mind a tomb similar to the Treasury. On closer examination however the capitals show a design based on a local pattern, rather than on the Corinthian one. 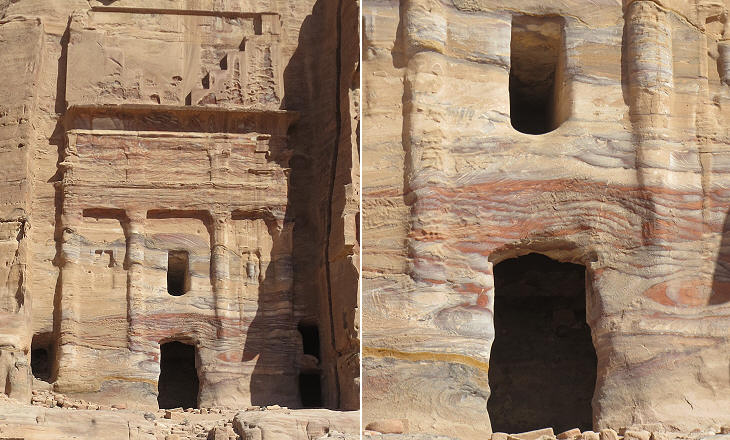 Royal Tombs: Silk Tomb, thus named because of the erosion effect on the rock near the entrance which resembles silk

The Assyrian-style step motif of the upper part of this tomb recurs in many others, especially in the smallest ones. It is likely that the earliest tombs were decorated with this simple pattern, before more elaborate designs came into fashion. 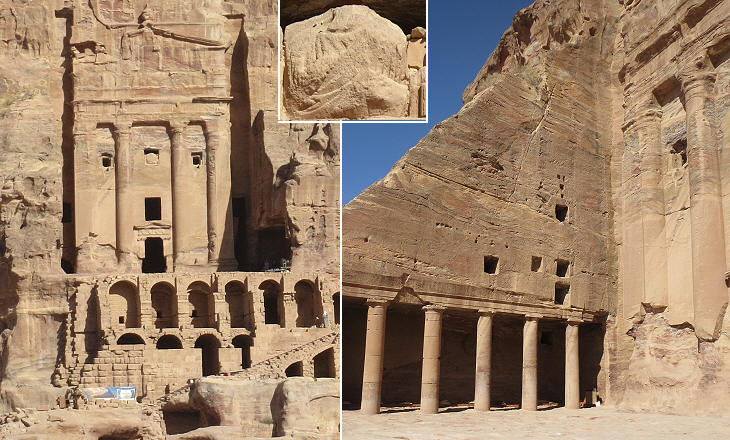 An enormous amount of rock had to be pulled away to obtain a vertical plane upon which to carve the decorative elements of the façade of this tomb. A much worn out bust of a man wearing a toga, a typical Roman garment, can be seen in the central niche, but it might have been added to the original building at a later period. The tomb is named after the urn at its top. 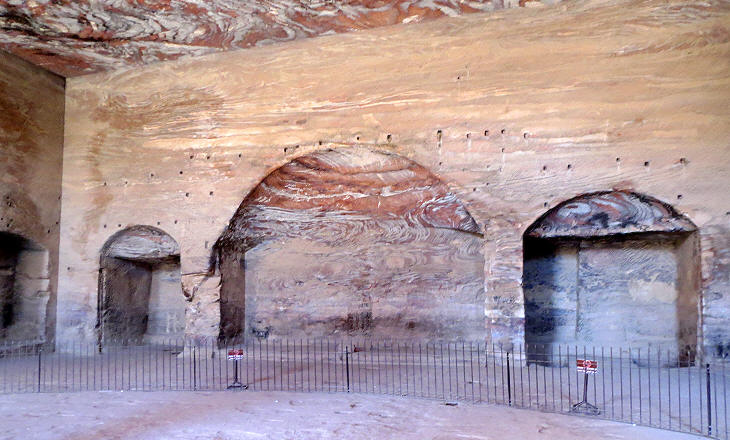 The interior of the Urn Tomb was turned into a church by excavating three apses in 447. It is one of few examples where the tombs were re-utilized (apart from those which were and are used as houses and stables by Bedouins). 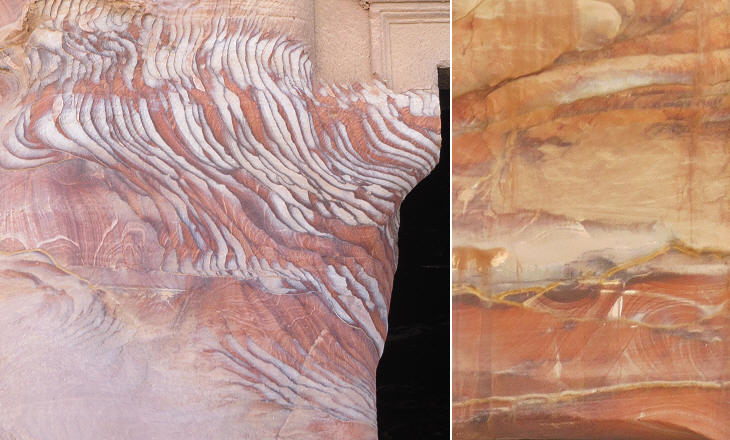 The tombs on the eastern cliff and in the Outer Syk are characterized by a distinctly reddish colour of the rock which here and there shows white, black and yellow veins. Similar veins were utilized as pigments for paintings by the first inhabitants of today's desert of El Auis in Libya near the border with Algeria. 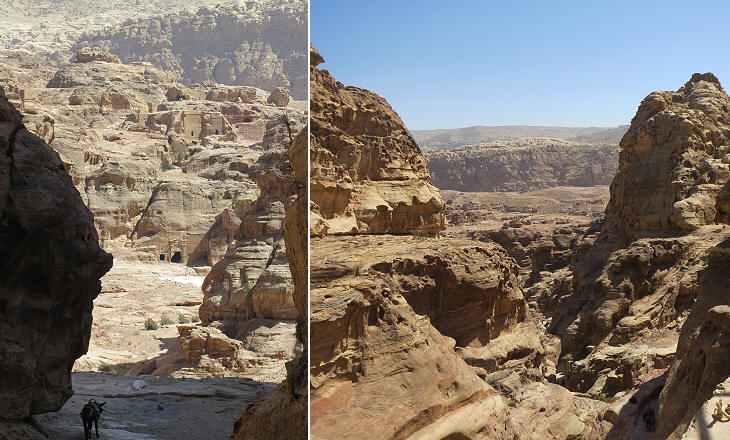 Burckhardt had many constraints during his visit to Petra. He had to be cautious in asking questions about ancient monuments because the locals feared he was trying to steal hidden treasures by magic. He could not deviate from the route followed by his guide without arousing suspicions. Europeans who visited Petra after him had more freedom of movement and were told that a large monastery (Ad-Dayr) stood at the top of a mountain north of Petra. They had to climb a steep path through a narrow valley in order to reach it. 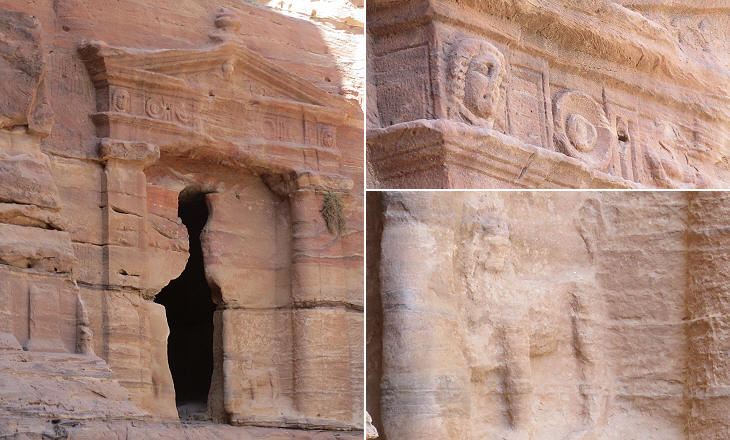 Tomb of the Lions and details of its façade

A side track leads to a hidden group of tombs, one of which retains interesting and elaborate reliefs. Heads of Gorgons were meant to chase away evil spirits and guardian lions at the sides of the entrance had the same purpose. The lintel was partitioned into triglyphs and metopes in line with classic architecture. 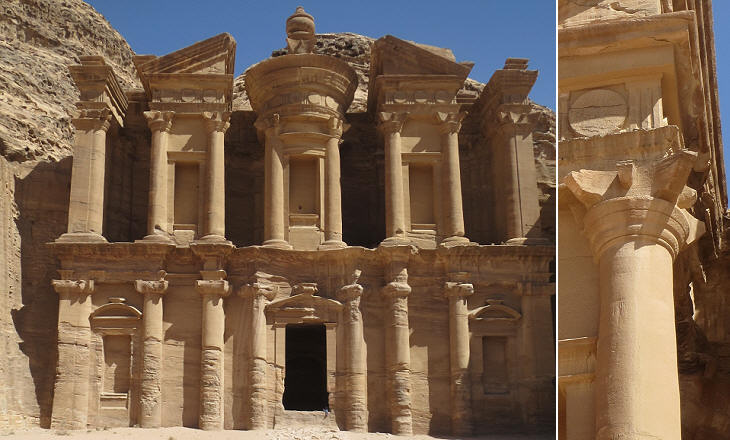 Ad-Dayr and an enlargement of one of its capitals

A drawing by David Roberts (which you may see in the image used as background for this page) made Ad-Dayr popular with the public at large. It is one of the three "must see" of Petra with the Royal Tombs and the Treasury. It appears to have been built before the latter, because some details such as the capitals are less influenced by classic architecture. 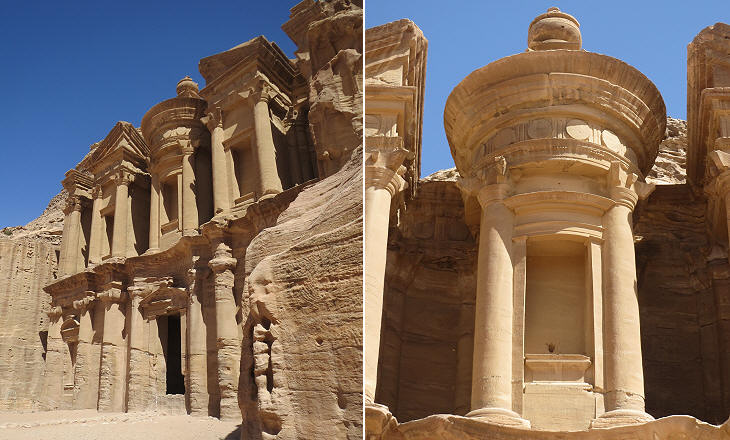 Other views of Ad Dayr

The building, which is preceded by a large terrace, was most likely a temple. There is evidence that it was used as a church. The central circular building in its upper part is a feature it shares with the Treasury and the Corinthian Tomb. 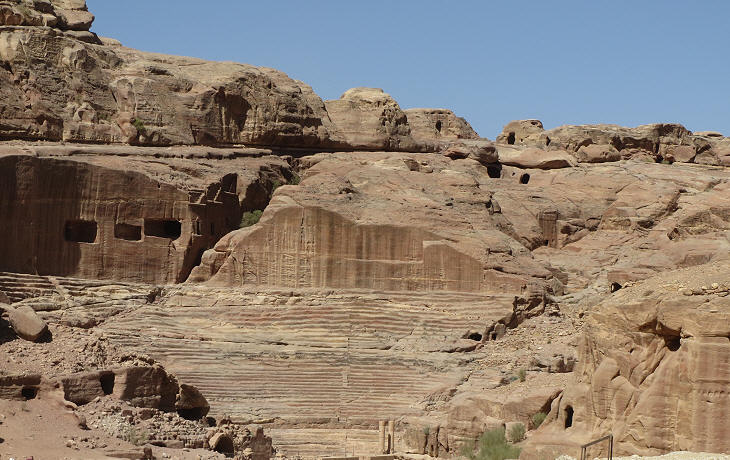 Hill of the High Place of Sacrifice

The Outer Syk separates the Royal Tombs from a hill made up of the same reddish stone. The façades of many tombs were cut when the theatre was enlarged, but some tombs remain on the other side. The hill is named after a terrace placed at its top where sacrifices were offered on a baetylus, a sacred stone of Phoenician origin. 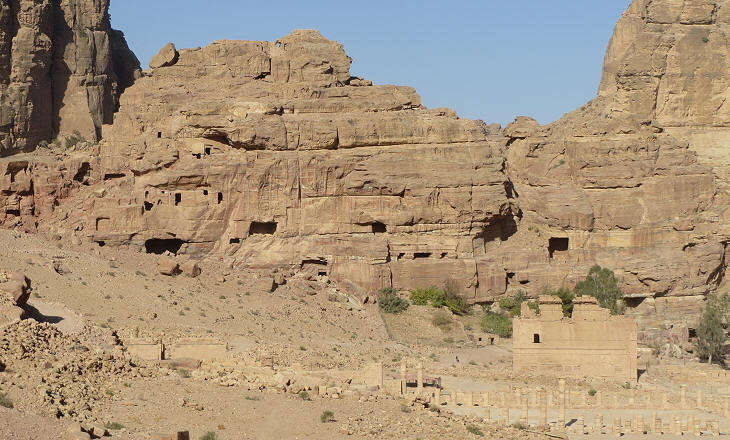 Al Habis, the hill nearest to the town, houses only some small tombs which explain its Arabic name. Perhaps the rock which appears cut by horizontal lines was not suited for large façades. Remains of medieval fortifications have been identified at its top. 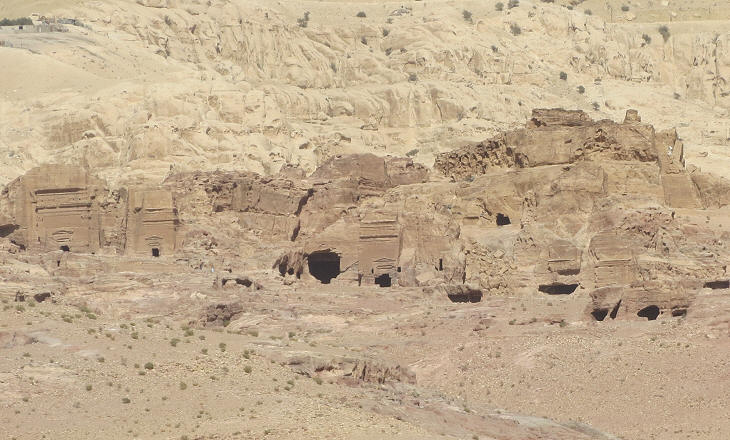 This necropolis is located to the north-east of the town and it houses many very similar tombs, including some with Christian symbols. 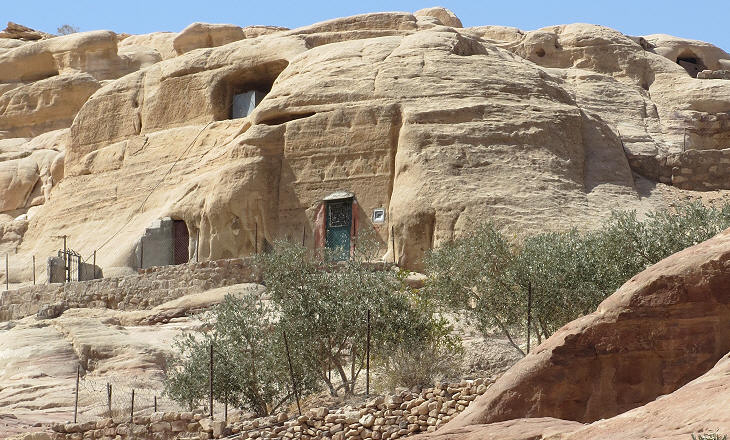 When Jordan authorities established the archaeological area of Petra they had to evict some Bedouins who lived at Al-Habis. Burckhardt did not see a living soul on his journey to Jebel Haroun, where he sacrificed a goat to Haroun (Aaron, Moses' brother), but today some Bedouins live inside some tombs on the road to Jebel Haroun.