July 13th, 1812 - In order to see Medaba, I left the great road at Hesban, and proceeded in a more eastern direction. (..) In seven hours and a half we came to the remains of a well paved ancient causeway; my guide told me that this had been formerly the route of the Hadj (the pilgrimage to Mecca), and that the pavement was made by the Mohammedans; but it appeared to me to be a Roman work. At the end of eight hours we reached Madeba, built upon a round hill; this is the ancient Medaba, but there is no river near it. It is at least half an hour in circumference; I observed many remains of the walls of private houses, constructed with blocks of silex; but not a single edifice is standing.
J. L. Burckhardt - Travels in Syria and the Holy Land - 1822 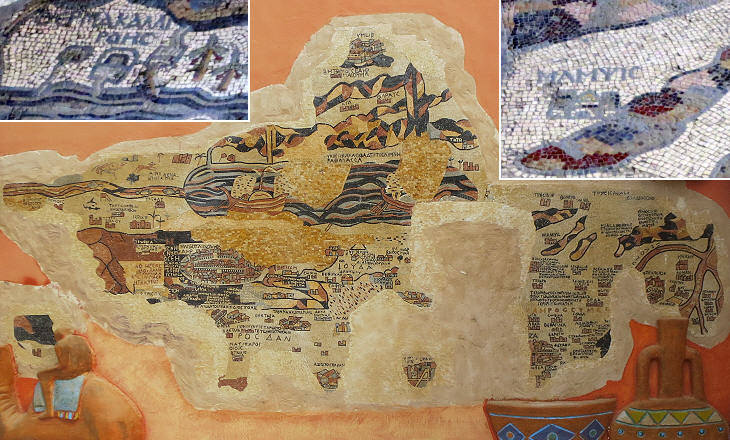 Painted and simplified copy of the mosaic at St. George's depicting a map of the Holy Land; insets (from the original mosaic): (left) Terma Kallirhoe, a spa on the Dead Sea coast; (right) Mamfis, a town in the Negev Desert

Burckhardt saw only ruins when he visited Madaba. In 1880 Christians from the region of Kerak in southern Jordan settled at Madaba. In 1896 they uncovered a large mosaic by clearing away the rubble from an ancient church. It depicted a map of the Holy Land, Jordan and Lower Egypt (East is at the top of the map). 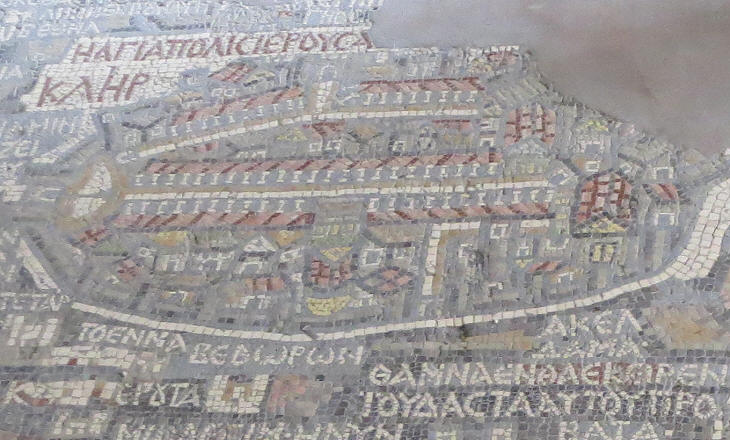 St. George's - Mosaic of the Map of the Holy Land: detail showing the Holy City (Hagia Polis) of Jerusalem

The mosaic was made in the VIth century, a period when Madaba was a flourishing town and an important bishopric see. The accurate depiction of Jerusalem has proved of great value in establishing the appearance of the Roman/Byzantine city and the location of its main streets and churches. Other towns were depicted in a more symbolic way by showing a gate or a couple of towers. 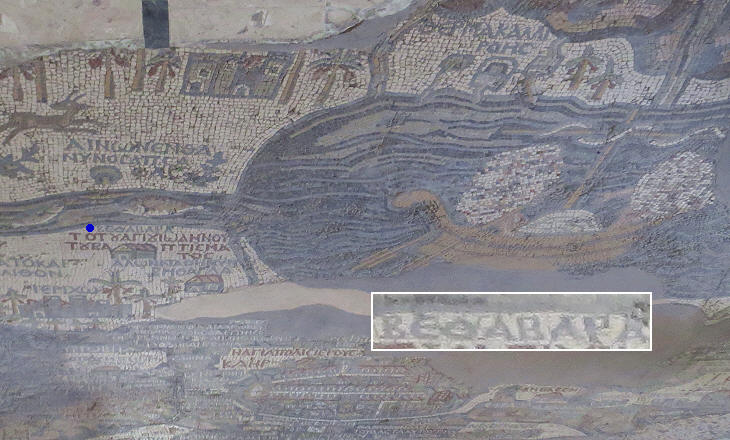 St. George's - Mosaic of the Map of the Holy Land: detail showing the River Jordan emptying into the Dead Sea. The blue dot indicates the site of the enlargement shown in the inset

The desert and the barren hills gleam painfully in the sun, around the Dead Sea, and there is no pleasant thing or living creature upon it or about its borders to cheer the eye. It is a scorching, arid, repulsive solitude.
Mark Twain - The Innocents Abroad - 1869.
The map suggests that the Dead Sea was larger than it is today, that there were ships sailing on it and that animals and plants lived on its shores. The map contains references to the Old and New Testaments, e.g. the location where Jesus was baptized is indicated by the word Bethabara meaning place of crossing (of the River Jordan). 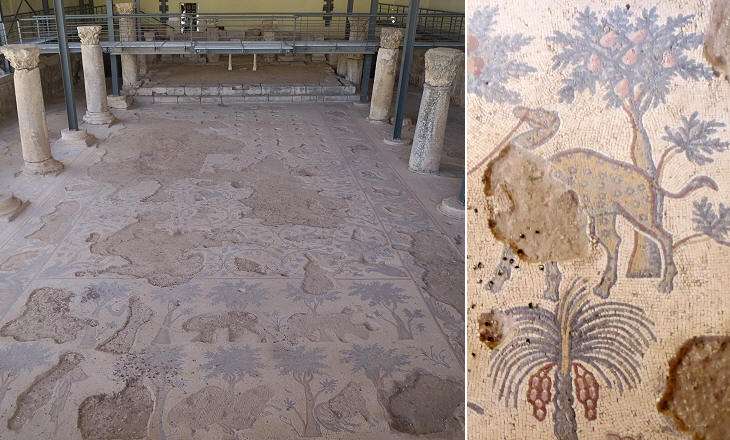 Church of the Martyrs and a detail of its floor mosaic. The pear tree is very similar to another one at a church on Mount Nebo

Eventually Madaba turned out to have many ancient churches with elaborate mosaics, some of which were made after the Muslim conquest of the country in the VIIth century. Some mosaics appear to have been damaged on purpose to delete images of human beings (maybe by Christian Iconoclasts). Because of the number of mosaics and of some inscriptions, archaeologists believe that there were local workshops making mosaics and this tradition has been revived in recent years. 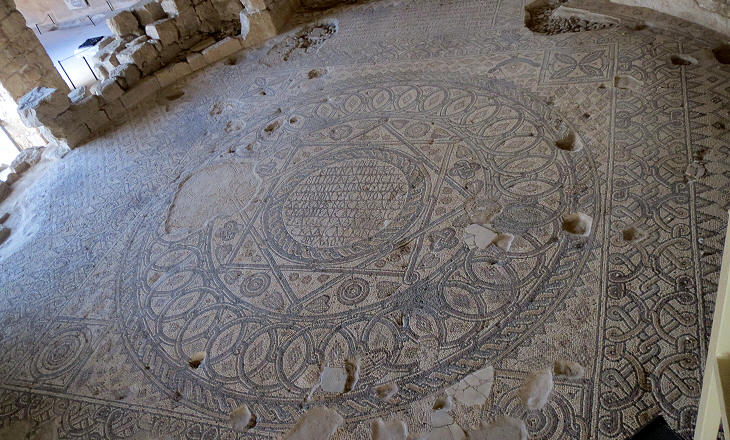 Church of the Virgin Mary: mosaic with dedicatory inscription

Archaeologists have identified the pavement of Cardo Maximus, the main north-south street of ancient Madaba. In the VIth century churches were built above temples or other buildings which flanked it. The largest one housed an icon of the Virgin Mary. A large dedicatory inscription on the floor mosaic indicates that the church was restored in 757 which denotes the existence of a wealthy Christian community even after the 747 or 749 major earthquake which struck the region and caused the abandonment of many towns. 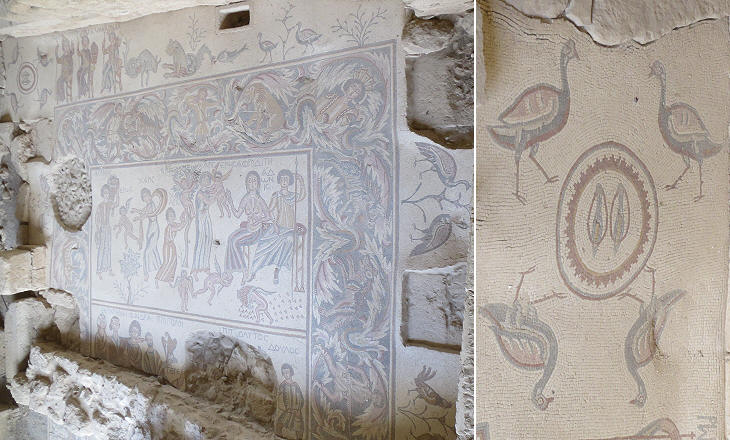 Church of the Virgin Mary: (left) Hall of Hippolytus; (right) detail showing sandals which indicated the entrance to the hall (in the external frame). The image used as background for this page shows a mosaic found at Madaba showing a similar detail (now in the Museum inside the Roman Theatre of Amman)

In 1982 archaeologists found out that the Church of the Virgin Mary was built incorporating some halls of a private residence of the early VIth century. The mosaic floors of this building depicted personages of the Greek myth. This is unusual considering the period when they were made. 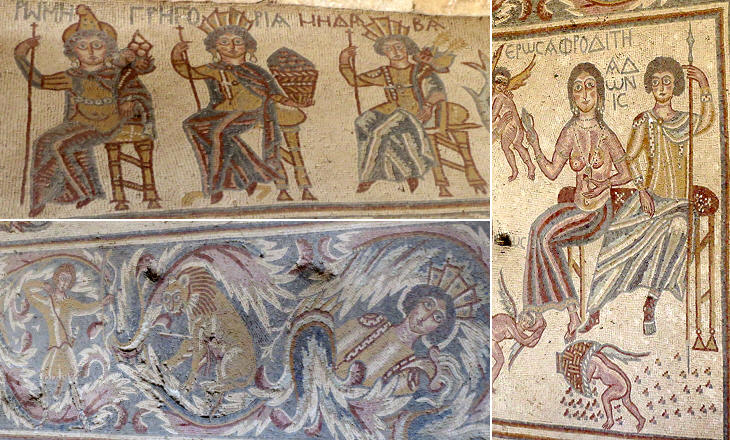 Church of the Virgin Mary - Hall of Hippolytus: details: (left-above) external frame: personifications of three towns: Rome, Gregoria and Madaba; (left-below) acanthus scroll surrounding the central panels and depicting hunting scenes and a personification of the Seasons; (right) Aphrodite and Adonis sitting on a throne

One the two central panels portrays Hippolytus (only the name is left) and Phaedra with her maidens (see image below). He was the son of Theseus who was falsely accused by Phaedra, his stepmother, of having raped her (you may wish to see a mosaic at Paphos on Cyprus on the same subject). The other central panel shows Aphrodite and Adonis (image above) with the Three Graces playing with Cupids (image below). 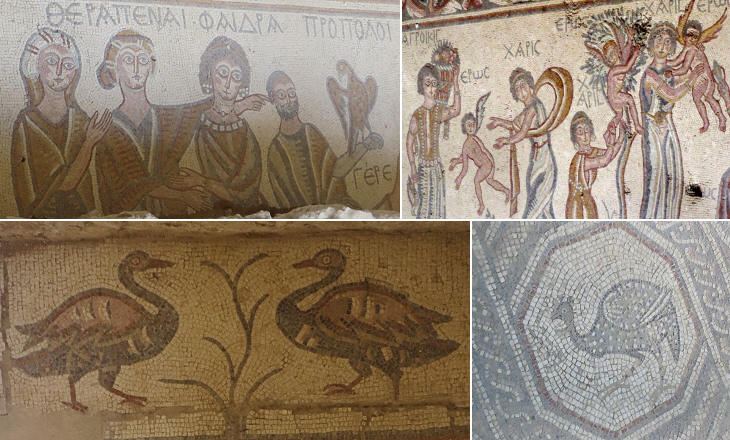 Church of the Virgin Mary - Hall of Hippolytus: details: (above-left) Phaedra with her maidens and a falconer who accompanied Hippolytus: (above-right) the Three Graces playing with Cupids and a farmer carrying a basket of fruits; (below-left) a detail of the external frame; (below-right) a detail of the floor mosaic of Crypt of Saint Elianos, a nearby chapel

Archaeologists believe that the mosaics of the Hall of Hippolytus were covered by the floor of the church only a few years after they were made. This perhaps because of the campaign launched by Emperor Justinian to completely eradicate paganism, even in private life; his decrees of 529 and 534, which were part of a large code, were zealously enforced and a mosaic such as that of the Hall of Hippolytus would have been regarded as unlawful. 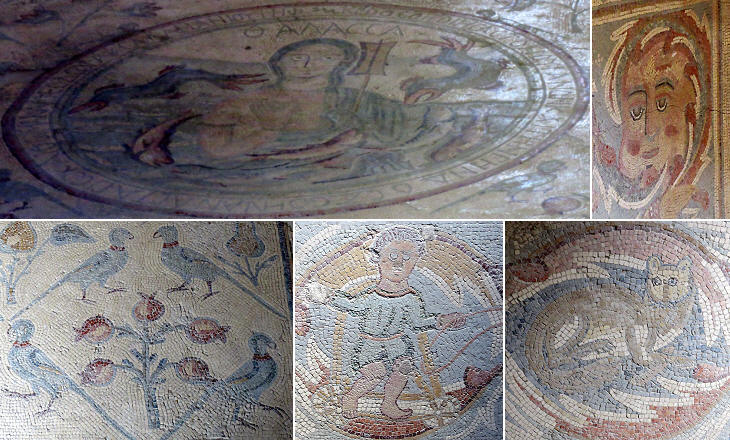 The efforts by Justinian to eradicate deep-rooted traditions were not entirely successful. The large floor mosaic of Agii Apostoli was made in 578 by a local mosaicist and at its centre a medallion portrays Thalassa, a sea goddess, surrounded by sea creatures. For centuries mosaicists had depicted Neptune and other sea gods in grand panels (you may wish to see a mosaic found at Utica in Tunisia) and the Bishop of Madaba did not feel the portrait of Thalassa could do any harm to his flock. She was not an Olympian goddess, but rather a synonym for the word "sea". The design of the mosaic is very elaborate and contains some unusual features e.g. the vivid depiction of a pine marten, an animal which is extinct in Jordan. You may wish to see a mosaic portraying Thalassa at Antioch. In 1985 the mosaics of a private mansion of the VIth century were found near the Church of the Martyrs. The mosaics are dated VIth century and include hunting scenes, several isolated animals, geometric patterns and here too sandals inside a crown to mark the entrance. The building was destroyed by a fire which caused the collapse of the ceiling, an event which protected the mosaics. 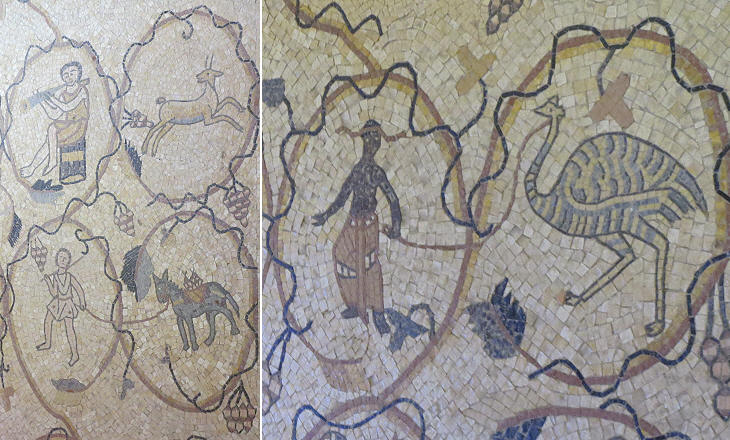 Umm ar-Rasas is situated twenty miles south of Madaba. From inscriptions found in the ruins of its churches it has been identified with Kastron Mefaa, a military Roman camp which became a flourishing town in the VIth century. The large and elaborate floor mosaic of St. Stephen's was completed in 757. The central part of the mosaic portrays many small scenes showing a man leading an animal; rather than being enclosed in acanthus scrolls they are inserted in a loose grapevine. You can see another image of this mosaic in the introductory page. 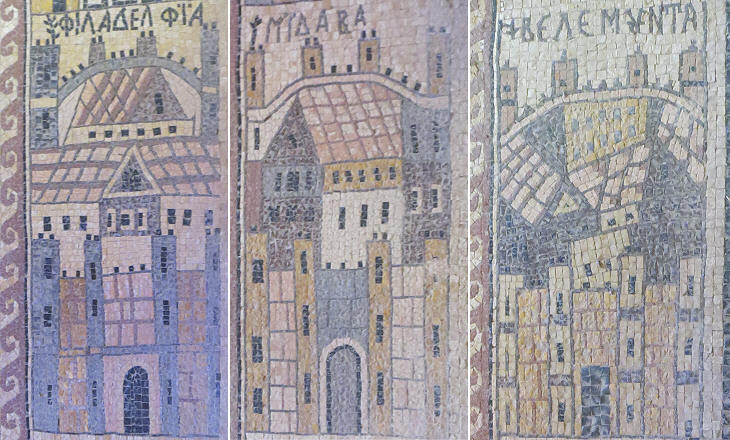 The key feature of the mosaic is the representation of eight towns of the Holy Land and of seven Jordanian towns on the sides of the central panel. This depiction of towns is not unique to Umm ar-Rasas and Madaba, but has been found at Jerash too. 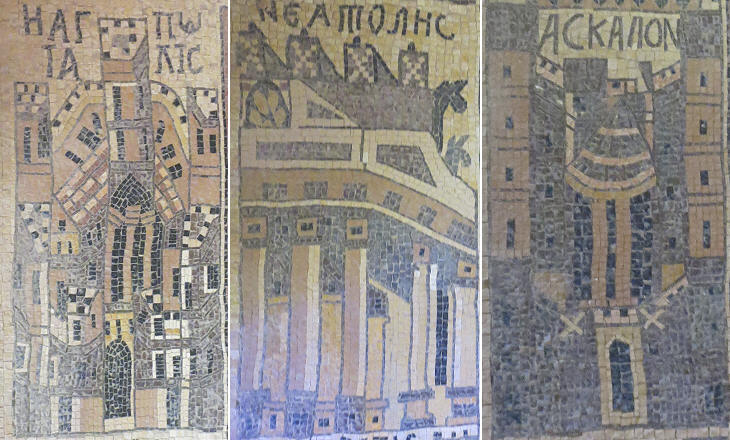