Madonna di S. Biagio seen from the western side of Montepulciano

Without the gate of S Biagio there is a magnificent church dedicated to the virgin Mary and built by Francesco (!) da S Gallo.
Thomas Nugent - The Grand Tour - 1749
The fine ch. of the Madonna di San Biagio, built from the designs of Sangallo the Elder, is considered one of his most successful works.
John Murray - Handbook for travellers in central Italy - 1853
Passing through the town-gate, we see, half-way down the hill, the graceful Church of La Madonna di S. Biagio, erected in 1518 by Antonio di San Gallo the Elder, and his best work.
Augustus J.C. Hare - Cities of Northern and Central Italy - 1876 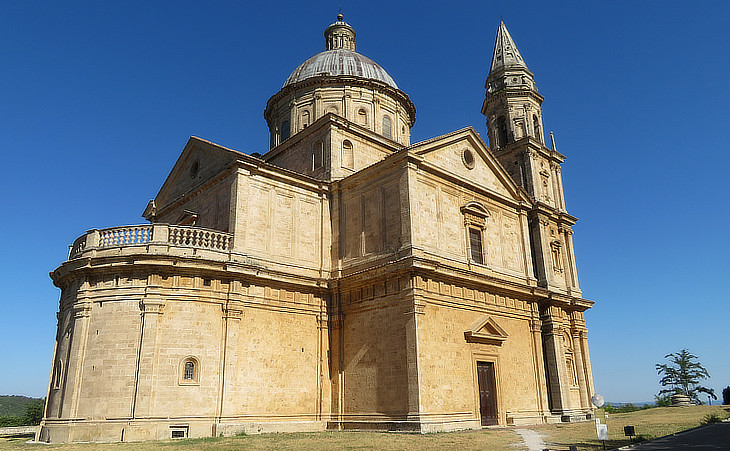 The men of Montepulciano determining, by reason of the miracles wrought by an image of Our Lady, to build a temple for it at very great cost, Antonio made the model for this, and became head of the undertaking; on which account he visited that building twice a year. At the present day it is to be seen carried to perfect completion, having been executed with supreme grace, and with truly marvellous beauty and variety of composition, by the genius of Antonio, and all the masonry is of a certain stone that has a tinge of white, after the manner of travertine. It stands without the Porta di S. Biagio, on the right hand, half-way up the slope of the hill.
Giorgio Vasari - Lives of the most eminent painters, sculptors and architects - translated by Gaston Du C. De Vere - 1913 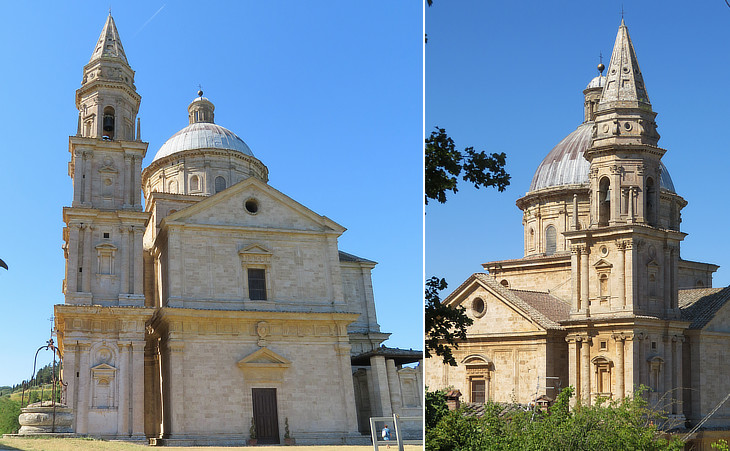 It is a Greek cross with singularly short transepts, and, standing on a little green platform rising out of the valley, built of rich yellow-grey stone, its appearance has a remarkable charm. Hare
Sangallo planned the construction of two identical bell towers at the sides of the façade but only one of them was completed. Its first three square stories were decorated with semicolumns and pilasters of the three classic orders, similar to the Colosseo of Rome. Renaissance architects looked for examples of ancient towers which they could study in order to develop the perfect bell tower to place near a dome, but they did not know of some very tall and fine Roman funerary monuments e.g. Mausoleum of the Julii at Glanum in France and Igeler Saule in the Mosel Valley. The issue of bell towers applied also to S. Pietro Nuovo and eventually it was decided not to build them. The title of Master Architect, rather than being a prerequisite of employment, was normally granted to a master craftsman in another field in consequence of his receiving his first building commission. Because in this system architecture perforce involved more taste than technique, the social position of the architect was high, and if a man was not a gentleman before practicing architecture, he became one after. Antonio Sangallo rose to eminence by another path, which appears to have been a risky and uncompromising one. He apprenticed in carpentry. By virtue of excellent family connections and good fortune of working under Bramante at the Vatican, he was able to overcome this stigma and to gain the title "Architect". (..) He was the only important Roman Renaissance architect who rose from the building trades. (..) The practical knowledge that the young Antonio gained working in the fabbriche of St. Peter's, the Vatican Palace and the Castle of Ostia (or Nettuno), combined with design training as a draughtsman for the ageing Bramante, appears today to be an excellent background for the practice of architecture. But the sixteenth century attitude is typified by Benvenuto Cellini, who wrote after Antonio's death that his inferiority to Michelangelo must be ascribed to the fact that he was neither a sculptor or a painter.
James S. Ackerman - Architectural Practice in the Italian Renaissance - Journal of the Society of Architectural Historians Vol. 13, No. 3 Oct., 1954 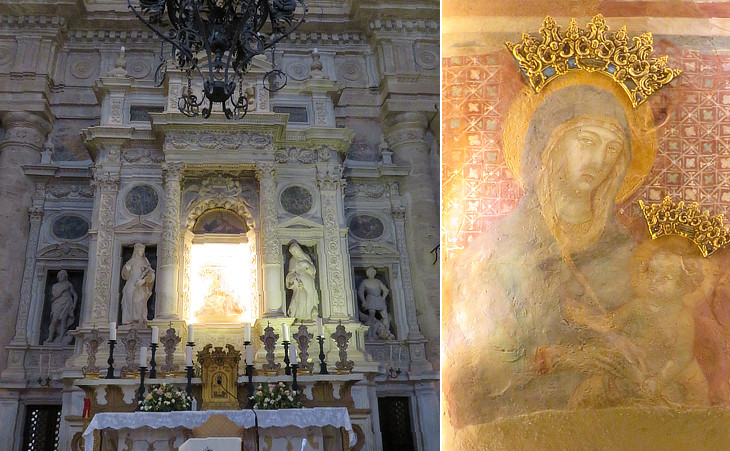 The most interesting building is the church of San Biagio, without the wails, a modern edifice after the designs of Sangallo, which owes its existence to a miracle of a Madonna, who is recorded to have winked her most holy eyes at two washer-women, in so fascinating a manner as to bring even a herd of cattle to their knees before her image.
George Dennis - The Cities and Cemeteries of Etruria - 1878
According to extant documents, 500 years ago, on April 23, 1518, the Virgin - depicted in the fresco (attributed to Maestro di Badia a Isola, XIII c.) in the middle of the monumental marble altar - opened and closed her eyes several times in front of two young girls, Antilia and Camilla, as they were returning from the nearby Pescaia fountain, situated under this building. Toto, a humble peasant also present at the scene, not only witnessed the Virgin's eyes repeated movements, but also saw his oxen kneel in front of the Virgin's image. At that time, the image was kept in a smaller church adjacent to the space that would later be used for the larger Temple that we have today.
From the official website of Tempio di S. Biagio.
The construction of the church was supported by Cardinal Antonio Maria Ciocchi del Monte, whose family palace at Montepulciano was designed by Sangallo. The Cardinal promoted also the construction of S. Maria della Consolazione, a church of Todi which has a design similar to Madonna di S. Biagio. 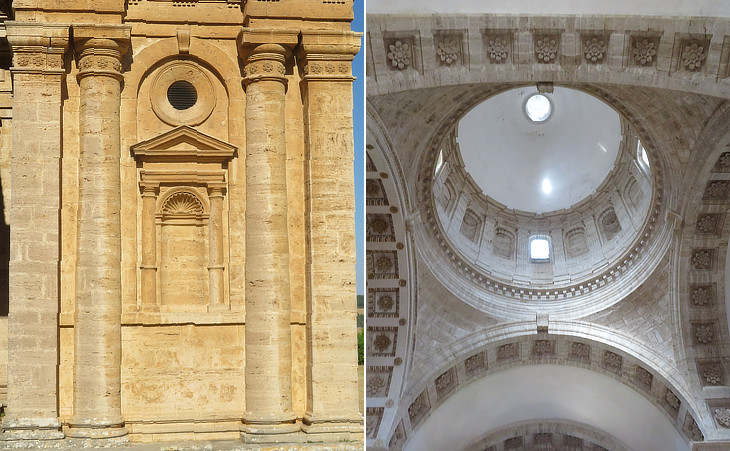 (left) Detail of the bell tower; (right) interior of the dome

The mass is built up of simple geometric forms capped by the cylinder of a drum and a slightly pointed dome. The interior gives a feeling quiet, harmonious spaciousness. All the mouldings and ornamental elements were carved with strong projection, so that heavy Roman arches, with deep coffers containing rosettes, define the tunnel vaults rising over the arms of the church. The neat Renaissance architectural features of the building gain from the absence of statues, coats of arms, paintings and other ornaments. 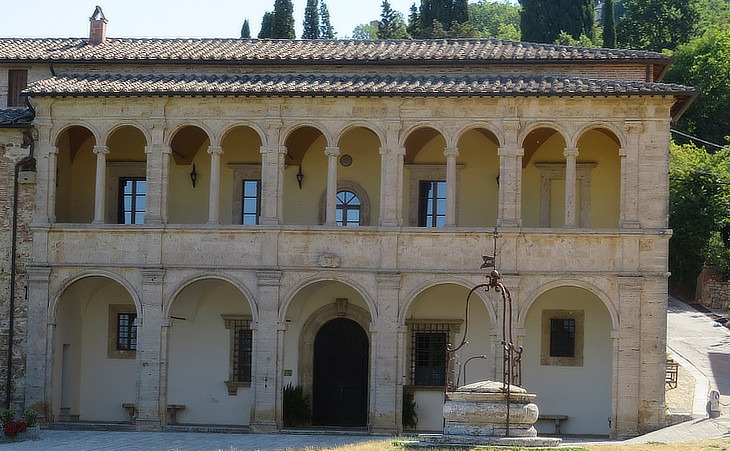 The Deanery was built towards the end of the XVIth century, but in line with the original design by Sangallo. The portico and the loggia make up a very harmonious structure which is based on both the study of the ancient buildings and the Renaissance development of "perfect/golden" proportions. 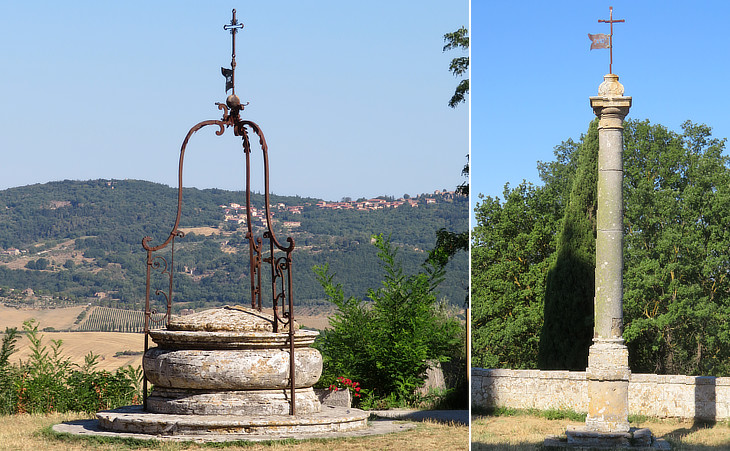 In origin the well was completed by two columns with a lintel above them, similar to that in Piazza Grande (also by Sangallo).
The image used as background for this page shows the coat of arms of the tomb of a member of the Cervini family inside the church. Pope Marcellus II was a Cervini and the family had a fine palace in town.