in Central Asia - Khiva - p. 2
(detail of a decoration at Abdoul Aziz Khan Medrese in Bukhara)

According to the Uzbek Institute of Restoration there are 54 historical monuments within the walls of the old town. These include 23 medreses, 6 mosques, 1 caravanserai, 6 mausoleums and one working hammam. There are 290 listed old houses. The large majority of the population of Khiva lives outside the old town, but the government is trying to repopulate it.

The existing monuments of Khiva were generally built after those of Samarkand and Bukhara and their design was influenced by those existing there. The very tall minaret built for Islam Khodja Medrese was a sort of local response to Bukhara's Kalon minaret. Together with the adjoining medrese it can be regarded as the last monument of the Khanate because it was built in 1910.

Mosques. There are few mosques in Khiva of much antiquity or artistic construction. Those that follow alone deserve notice. (1.) Hazreti Pehlivan, an edifice four centuries old, consisting of one large and two small domes: it contains the tomb of Pehlivan Ahmed Zemtchi, a revered saint, patron of the city of Khiva. Its exterior promises little, although the kashi (ornamental tiles) of the interior are tasteful.
Arminius Vambery - Travels in Central Asia in 1863
It is difficult to summarize the personality of Mahmoud Pakhlavan; he was a Persian Sufi teacher, but also a gymnast and a wrestler known for his strength as the Hercules of Asia. He is attributed the following verse: "Learn modesty, if you desire knowledge" which is recited at meetings of Varzesh-e Pahlavani (Sport of the Heroes), which is still popular in Iran.

Both inside the dome and in the courts leading to it there are always swarms of blind practitioners of the "memoria technica" who know the Koran by heart from frequent repetition, and are ever reciting passages from it. Vambery
In Khiva Pakhlavan Mahmoud (who died in 1325) was regarded as a sort of patron saint and the last khans chose to build their burial chamber next to that of Pakhlavan.

The current complex of buildings is mainly the result of an 1810 expansion, but additions continued until 1913. It is usual for newlyweds to pray briefly at Pakhlavan's tomb (see image in the introductory page).

(2) Another mosque is the Djiima-a-Mesdjidi, which the khan attends on Friday, and where the official khutbe (prayer for the ruling sovereign) is read. Vambery
Djuma Mosque, a mosque with a covered courtyard designed for the rugged climate of Central Asia, is unique in its proportions and the structure of its inner dimensions (55m x 46m), faintly lit by two octagonal lanterns and adorned with 212 columns.
From the UNESCO synthesis of the universal value of Itchan Kala, the Old Town of Khiva which in 2000 was added to the World Heritage List.
The Jamia (Friday) Mosque of Khiva is a very large one-storied building; the roof of the main prayer hall is supported by finely carved wooden columns. The mosque was almost entirely reconstructed in 1788-1789. The leaning minaret dates to that period too.
With some exceptions, the construction technique used for minarets in Central Asia did not stand the test of time. Earthquakes had a major role in damaging them, but probably the key cause lay in their mud bricks which did not have the required level of strength, because baked bricks were not often used.

Medresse (Colleges). The number of colleges and their magnificent endowments are, in Central Asia, always a criterion of the degree of prosperity and religious instruction of the population; and when we consider the limited means at their disposal, we can not but laud the zeal and the readiness to make sacrifices evinced both by king and subject when a college is about to be founded and endowed. (..) Allahkuli Khan Medressesi has 120 cells. Vambery
The madrasahs, which make up the social areas, have majestic proportions with a simple decoration, and they form another type of Islamic architecture specific to Central Asia. UNESCO
The Khans of Khiva competed in associating themselves with the construction of a large medrese. A large part of the old town, especially the southern one, is almost entirely occupied by medreses and other religious buildings. The bazaar was located outside Palvan Darvoza, the eastern gate of the old town.

Medemin Khan Medressesi, built in 1842 by a Persian architect, after the model of a Persian caravanserai of the first rank. On the right is a massive tower, somewhat loftier than the two-storied medresse, but which, owing to the death of the builder, remains imperfect. This college has 130 cells, affording accommodation for 260 students. Vambery
In the XIXth century Khiva was the capital of a relatively small nation surrounded by hostile tribes and threatened by colonial powers, but Mohammed Amin Khan decided to build a new medrese next to which he planned to erect the highest minaret of the world. In 1855 the minaret was still under construction when the Khan was assassinated; the medrese was completed but not the minaret, so that Khiva has the largest uncompleted minaret of the world.

Mohammed Rakhim Khan II wanted to see his own medrese from his palace in the citadel. It was built in 1871 and shortly after its completion, the Khan's grandeur ambitions were dramatically curtailed: in 1873 he surrendered to the Tsar's troops; some of his properties were confiscated, he had to pay a yearly compensation for the Russian protection and the lucrative slave market was ended.

These medresse are the only edifices in the midst of the mud huts that deserve the name of houses. Their courts are for the most part kept clean, are planted with trees, or used as gardens. Vambery
In return for his acceptance of the Russian protectorate, Mohammed Rakhim Khan II had the opportunity to travel to St. Petersburg. He was very impressed by the early use of electricity he saw there. Unfortunately the appliances he brought home did not work, because there was no electricity in Khiva.

Matinyaz was the divanbegi (high officer/advisor) of Mohammed Rakhim II Khan of Khiva between 1864 and 1910. The relatively small medrese he built near the citadel has been turned into a restaurant.
The hammams named after Prince Anoucha are among the oldest monuments of Khiva. They were built in 1647 and they are still working.

Tach Kaouli Palace harem courtyard: (left) iwans of the (four) wives; (right) base of a column

In Central Asia stone is generally not available for use as a building material.
Andrew Petersen - Dictionary Of Islamic Architecture - 1996
In the 1830's Ala Kuli Khan built a second royal residence at the eastern end of the old town. Kaouli (or haouli) was the name given to fortified houses in Khiva's countryside, Tach (or Tash) means stone. The new residence was given the outer appearance of a fortress while its courtyards were finely decorated. 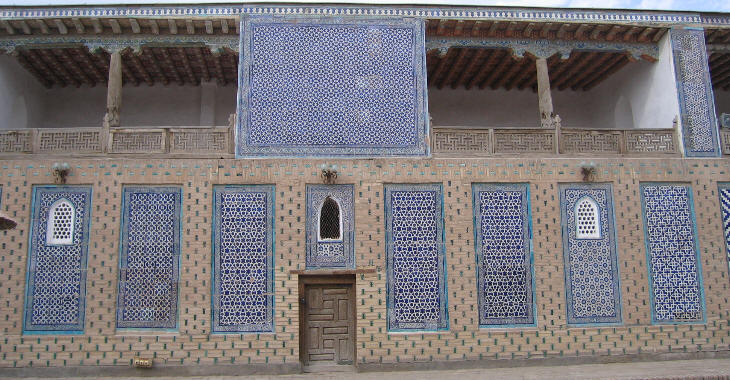 Tach Kaouli Palace harem courtyard - side where the concubines lived; you may wish to see the Harem of Topkapi Palace in Istanbul

In 1875 Colonel Frederick Gustavus Burnaby, an English traveller and soldier, reached Khiva to ascertain what had really happened to the Khanate since the Russian occupation. He was warmly received by the Khan who hated the Russians. He was impressed by the number of guards who protected the privacy of the harem. He also noticed that although the Khan had four wives and many concubines some good-looking boys of an effeminate appearance, with long hair streaming down their shoulders, and dressed a little like women, lounged about, and seemed to have nothing in particular to do.

Burnaby so described his reception by the Khan: After I had been kept waiting for about a quarter of an hour, a messenger entered the room and told that the Khan was disengaged and ready to receive me. Here we found the reception hall, a large tent of a dome-like shape. I was motioned to enter by lifting up a fold of thick cloth. On doing so I found myself face to face with the celebrated Khan, who was reclining against some pillows or cushions, and seated on a handsome Persian rug, warming his feet by a circular hearth filled with burning charcoal.

Return to Khiva - page one or move to:
Introductory page
Bukhara
Chakhrisabz
Samarkand