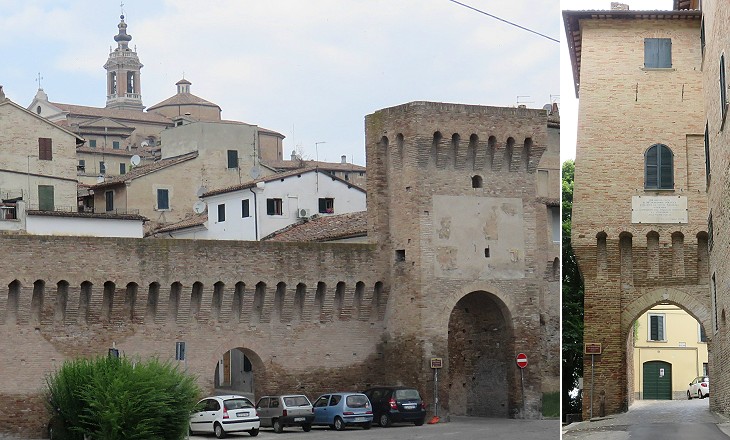 Gates: (left) Porta Valle and the Cathedral in the background; (right) Porta Nuova aka Bersaglieri (eastern gate near the Cathedral)

Jesi is situated on a low ridge to the north of the River Esino. Its name and that of the river derive from Aesis, the Latin name of a Roman colony founded in 247 BC. The urban layout of the medieval town was based upon that of the Roman one with a long east-west street, similar to the ancient Decumanus Maximus (you may wish to see that of Damascus). It linked the Cathedral, which was built on the highest point of the Forum, to a lost western gate. 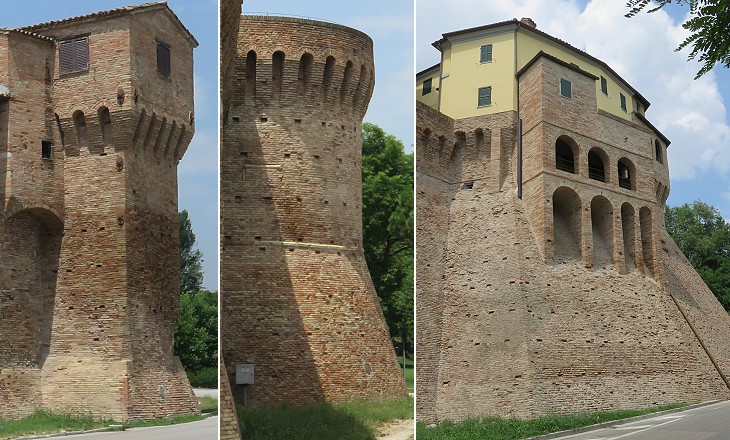 Eastern section of the walls

The height and the slope of the ridge did not provide medieval Jesi with a natural fortification. Its inhabitants had to build high walls (protected in some sections by a moat) in order to defend themselves during their frequent wars against Fabriano, Ancona and other towns. The eastern section of the walls is well preserved and it shows some additions which were designed in the late XVth century by Baccio Pontelli, an architect who built many other fortifications for the Popes (e.g. Castle of Julius II at Ostia). At that time Jesi was a direct possession of the Papal State after having been a Comune, an independent city-state, for centuries. 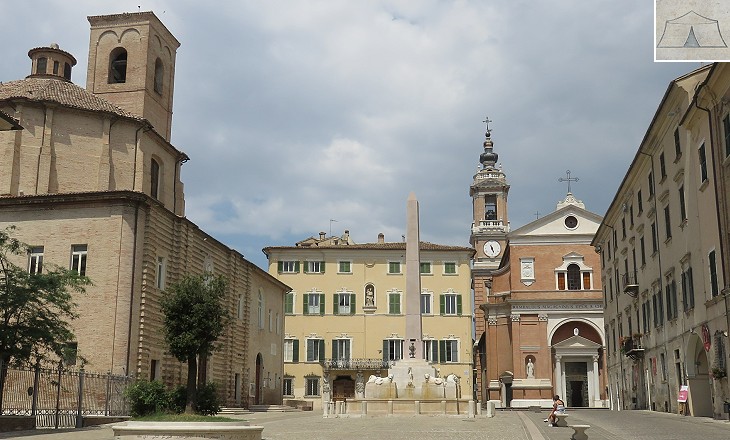 Piazza Federico II which stands on the site of the ancient Forum: (left) S. Floriano; (centre) a modern obelisk/fountain relocated to this square in 1947; (right) Cathedral of S. Settimio with bell tower having a spire resembling that of Loreto by Luigi Vanvitelli; (inset) stone in the pavement of the square marking the site of the tent where Emperor Frederick II was born

Italian Comune drew their right to self-government from authorizations granted by the German (aka Holy Roman) Emperors or by the Popes. The Comune supporting the Emperors were known as Ghibellines and those standing for the Popes as Guelphs. In 1176 Emperor Frederick I was defeated by a coalition of Guelph Comune at Legnano. The marriage in 1186 of his son Henry with Costanza d'Altavilla, who became Queen of Sicily (and southern Italy) in 1194, gave new strength to the Ghibelline party. Costanza was on her way to Sicily when she gave birth to a baby boy (Frederick II) in Jesi. Because there were rumours that, owing to her age, she was not actually pregnant, the delivery was arranged in a tent and the noble women of Jesi were invited to attend the event. 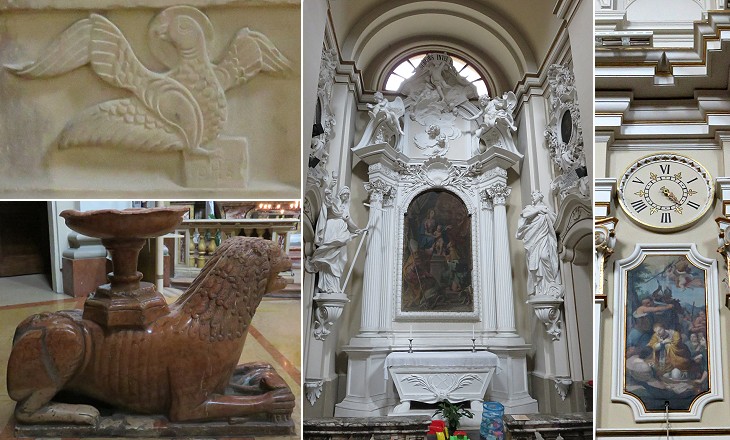 Interior of the Cathedral: (left-above) medieval relief; (left-below) one of two statues of lions which stood outside the Cathedral; (centre) XVIIIth century altar; (right) clock marking the Italian Hour

During the first half of the XIIIth century Jesi enjoyed great economic and demographic development, thanks to the protection of Emperor Frederick II. Its Cathedral was completed in 1238 and it was designed by Giorgio da Como, who built the porch of S. Ciriaco in Ancona (the lions now inside the Cathedral resemble those at S. Ciriaco). The interior was renovated by Filippo Barigioni in 1732-1741 and the façade was completely redesigned in 1889. 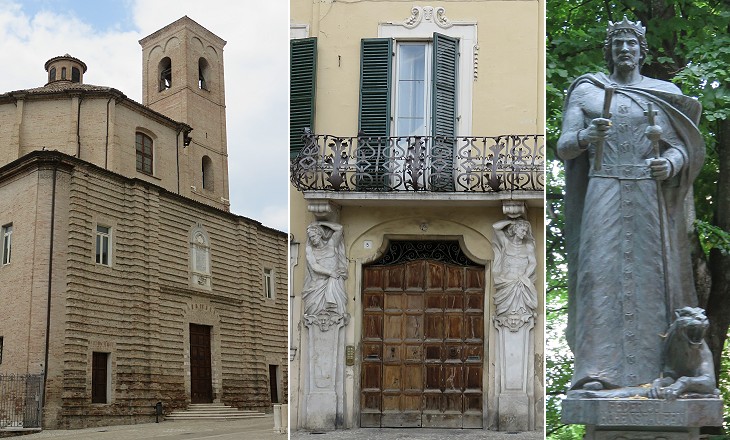 The medieval aspect of Piazza Federico II was completely lost in the XVIIIth century when S. Floriano and Palazzo Balleani were built. The Balleani were a very wealthy family and they had another large palace at Osimo. Usually architects working in provincial towns of the Papal State followed the trend of Rome. In the case of Palazzo Balleani instead the design of the portal was inspired by palaces of Milan or Vienna.
Emperor Frederick II was placed by Dante in Hell (Canto X), but in another passage Dante said of him d'onor sì degno (was so worthy of honour) (Canto XIII). He was highly praised by Voltaire, the leading French Enlightenment philosopher: Frederick II was born in Italy: he was fond of that agreeable country, and could bear neither the climate, nor customs of Germany. (..) The kingdoms of Naples and Sicily were civilized and embellished through his care. He built towns, founded universities, and gave encouragement to letters, which in some measure seemed to revive.
Voltaire - An Essay on Universal History translated into English by Thomas Nugent - 1759 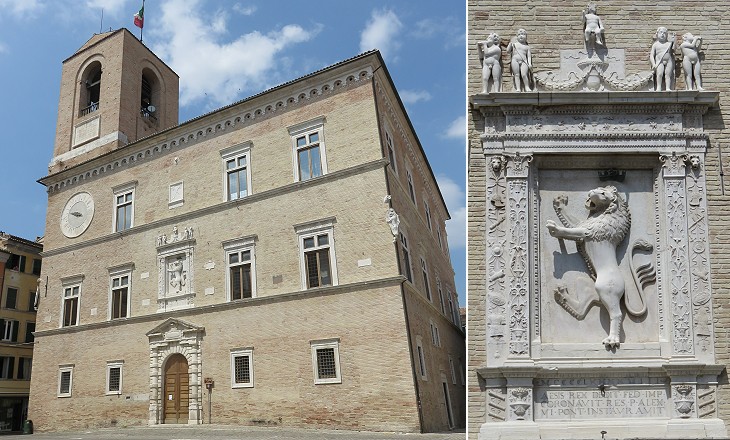 (left) Palazzo della Signoria designed by Francesco di Giorgio Martini in 1486 (the tower was added in its present form in 1661); (right) coat of arms of Jesi and marble frame by Michele di Giovanni da Milano (1498). Another similar coat of arms can be seen in the image used as background for this page

So this is the building one has come to see, this square brick edifice that is in bloom. For the decrepit brick has given birth to straight stone window-frames beaded as with the pips of young fruit. (..) In the great period of the fifteenth century Renaissance sculptors made stone to bloom. (..) This Quattro Cento palace at Jesi gives testimony of human will that can pierce mist and rain with blood afire, gives back joy in life that stirs in human blood, overcomes the sense of dreariness.
Adrian Stokes - The Quattro Cento - 1932
Adrian Stokes (1902-1972) was a British writer and painter known principally as an influential art critic. 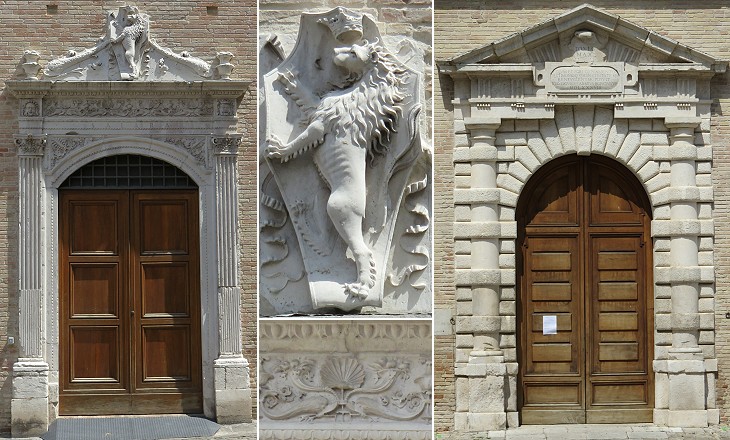 Stokes was somewhat visceral in his appreciation of the Quattrocento (Italian architecture of the XVth century) and in his despise for the styles which came after, but Palazzo della Signoria is indeed worthy of his enthusiastic description.
In addition to Palazzo della Signoria, which is regarded as one of his masterpieces, Francesco di Giorgio Martini designed many buildings for the da Montefeltro in Urbino, Sassocorvaro, Gubbio and other towns of their Duchy. Palazzo della Signoria was the residence of the Papal governors from 1585 to 1860.

The neat design of Palazzo della Signoria and its balance between brickwork and white stone frames had an influence on two large buildings which stand opposite it in the same square. Although some details, such as the frames of their windows, show that they were not designed in the Quattrocento, Stokes did not complain about them marring the beauty of the site. 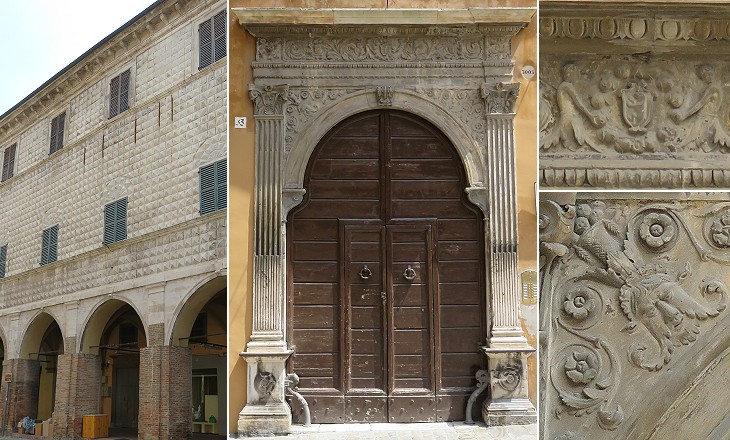 Stokes considered appreciation of art as the means to make sense of life and he concentrated his attention on what he considered to be masterpieces capable of doing this. He came to Jesi with the sole objective of seeing Palazzo della Signoria, so in his account he did not mention other Renaissance buildings.
Palazzo Ricci has a relatively rare diamond-shaped decoration. The best known example is Palazzo dei Diamanti in Ferrara, but it can also be seen in Rome at Palazzo Santacroce. Palazzo Amici has a portal with an elaborate decoration which is typical of the period it was designed. 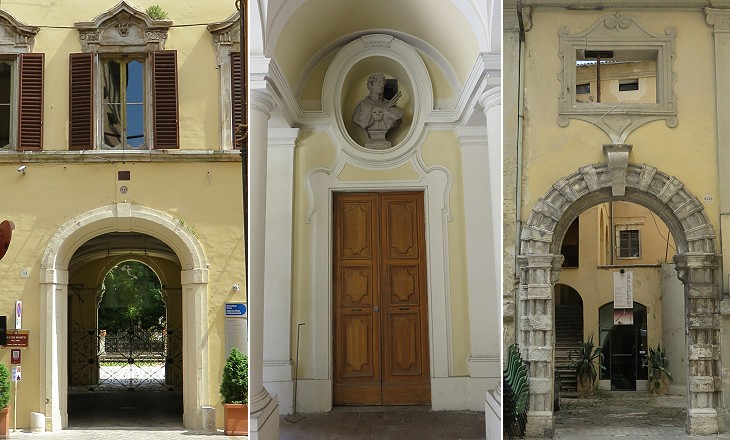 We know that Stokes drank one or two glasses of Verdicchio, the white wine for which Jesi is renowned, before visiting Palazzo della Signoria. Although the XVIIIth century is generally regarded as a period of economic decadence of the Papal State, it was not so in Jesi where many palaces and churches were built. The wealthiest families of the town owned large estates in the countryside. Unlike those of other locations, they took an interest in developing them. In 1838 they promoted the foundation of Società di Agricoltura Jesina, a sort of academy aimed at introducing the best farming practices. 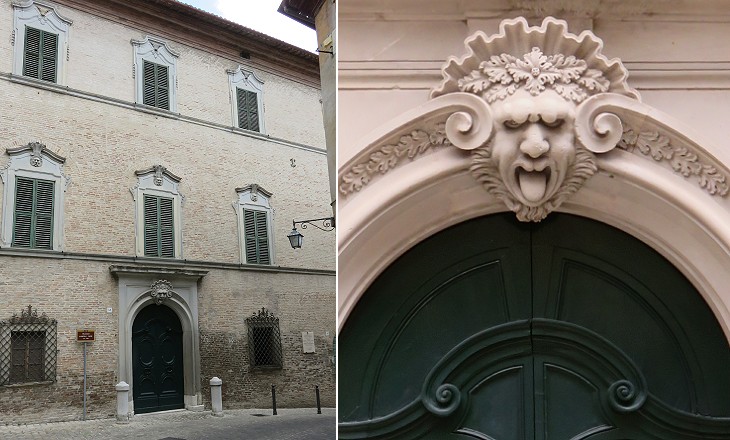 Stokes made a remark on the "awry" (twisted, not straight) masks he saw on some palaces of Jesi and criticized them. The use of stucco decoration irritated him. Being an easy-going fellow I rather asked myself how parents living at Palazzo Marcelli could teach their children not to stick out their tongue. You may wish to see a page on the masks of the Roman palaces. 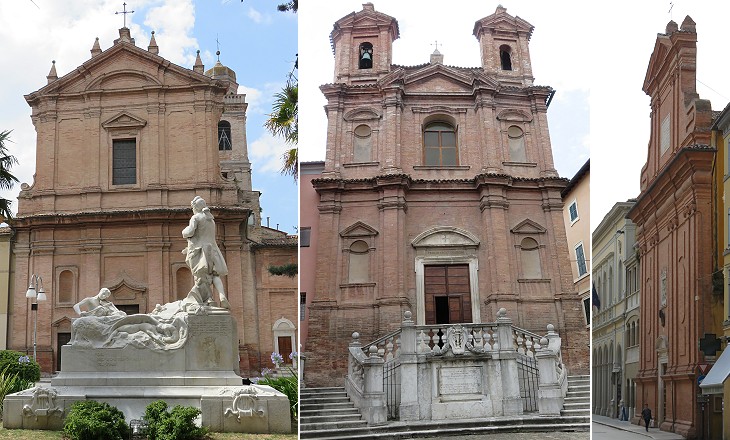 The western part of the town is mainly an XVIIIth century development which today has become its busiest section. It is crossed by a long straight street (see below) ending with Arco Clementino, an arch built in 1734 to celebrate Pope Clement XII (another Arco Clementino was built in Ancona in the same period). It has several churches which are characterized by the use of bricks without white stone frames for the windows. 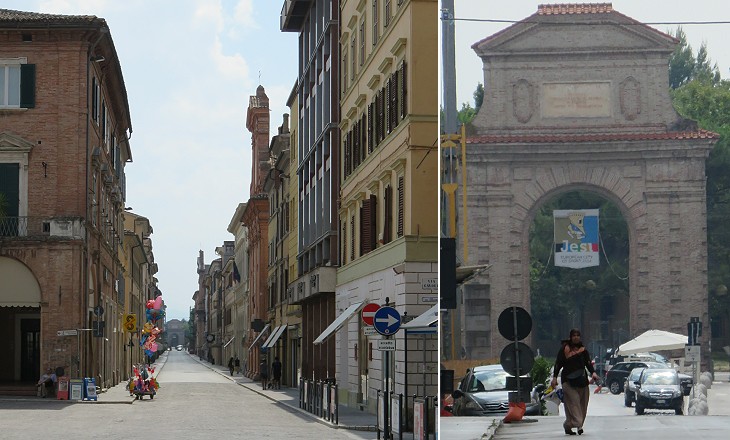