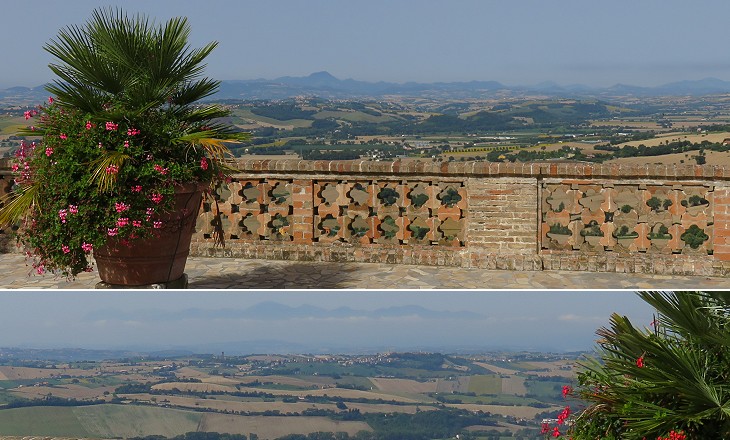 Westward views from Osimo: (above) Mt. Catria north of Cagli; (below) Mt. Vettore west of Ascoli

Est Auximum urbium Piceni princeps (..) excelso in colle sita nullum habet in plano aditum. Osimo is the most important town of Picenum (the southern part of the Marches) and it stands at the top of a hill which cannot be reached from the valley.
Procopius of Caesarea - De Bello Gothico
Procopius described the events which occurred during the Greek-Gothic War of 535-553. At that time many Roman towns had already been abandoned, but Auximum (Osimo), thanks to its strong position, had grown in importance to the point that Procopius referred to Ancona as its port. The town enjoys commanding views over the whole region. Courtyard of the Town Hall: 1) one of twelve beheaded statues from the Forum of Auximum; 2) relief portraying lictors (Roman officers who preceded consuls or magistrates holding fasces, symbols of power, during public celebrations); 3) inscription making reference to Pompey; 4) capital with a portrait of Francesco Sforza. He was the brother of Alessandro Sforza who ruled over Pesaro and he seized Osimo in 1433; 5) coat of arms of Osimo with the keys of St. Peter, symbol of the Papal State

The exhibits displayed in the Town Hall provide clues to the long history of Osimo from the time it was a Roman colony (157 BC) to its final acceptance of the Papal rule at the end of the XVth century. 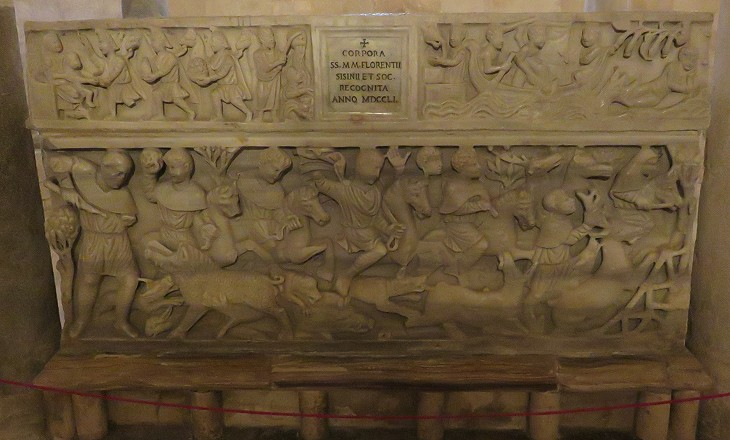 The Cathedral houses other exhibits which are relevant to the history of Osimo. The sarcophagus containing the remains of four martyrs combines traditional Roman subjects with new ones. The lower part depicts a boar hunting scene, whereas the lid depicts four small scenes showing events from the New and the Old Testament (The Nativity and the Adoration of the Magi, St. Peter striking a rock wall and drawing forth water, Noah in the Ark and Jonah being swallowed by a sea monster). These scenes have similarities with other sarcophagi (see a list of ancient sarcophagi which are shown in this website). 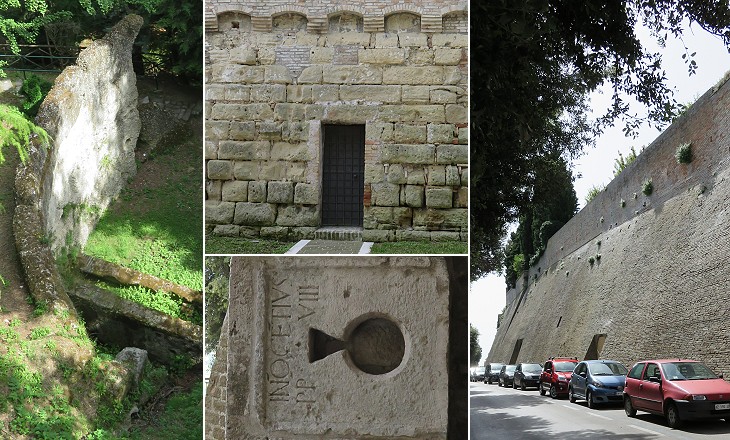 According to Procopius, Byzantine general Belisarius besieged Auximum in person, to recover it from the Goths who had taken possession of it. He succeeded in making himself master of it by means of poisoning the wells(Fonte Magna), after a siege, as another chronicler reports, of six months.
Thomas Adolphus Trollope - A Lenten Journey in Umbria and the Marches - 1862
The name of Pope Innocent VIII is linked to another dramatic episode in the history of Osimo. In 1486 the town was seized by Boccolino Guzzoni, a condottiere, a leader of mercenary troops who fought for whoever could pay him the most and often switched sides. Guzzoni did not hesitate to ask Sultan Bayazid II for help. In the following year the papal troops led by Gian Giacomo Trivulzio, another condottiere, ousted him from Osimo before the Ottomans could intervene. 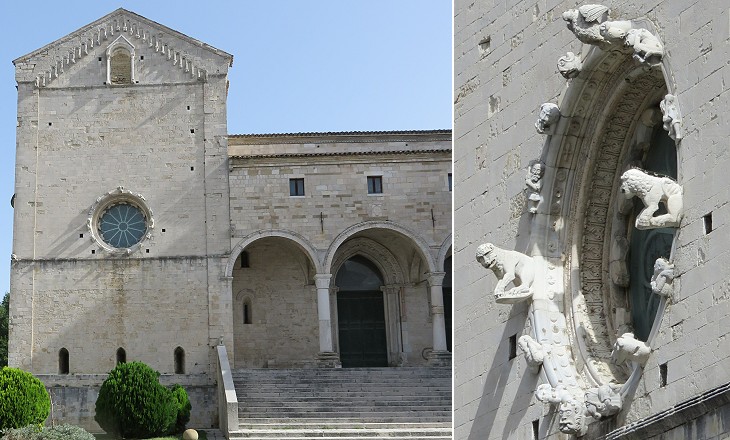 The Cathedral occupies the extreme summit of the hill, a kind of peak rising to an elevation above the rest of the town. Trollope noted that the deep and ample porch before the door of the Cathedral is at Osimo an object of necessity quite as much as of ornament. For the city on its isolated hill is exposed to such winds as the neighbouring country knows nothing of. The day we passed there was a perfectly fine one, with a brilliant sun shining in a deep-blue cloudless sky. But such a wind was blowing through the streets of the little town, that it was without exaggeration at times as much as I could do to walk against it.
The Cathedral stands on the site of a temple to Aesculapius and is dedicated to St. Leopardo, the first Bishop of Osimo. 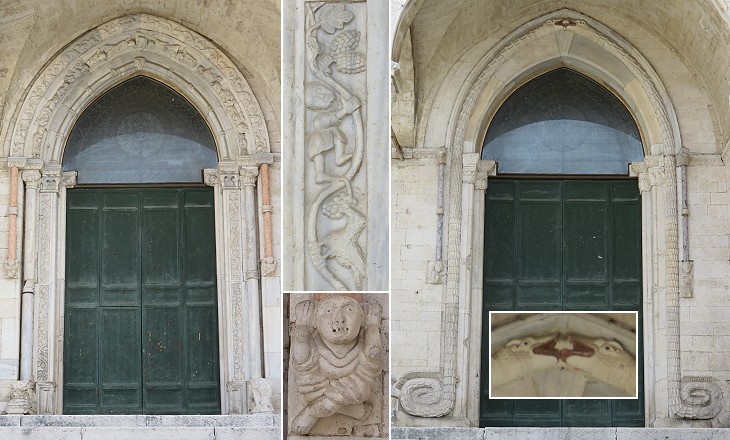 The design of the porch, which was the main entrance until 1589, is attributed to Filippo Lombardo who built the façade of S. Maria di Piazza in Ancona. The decoration is less rich than in S. Maria di Piazza because in Osimo Lombardo paid more attention to architectural elements. In the right portal two large snakes replace the traditional minute reliefs in a very novel way. Lombardo added a touch of colour by placing small columns of ancient marbles at the sides of the portals. 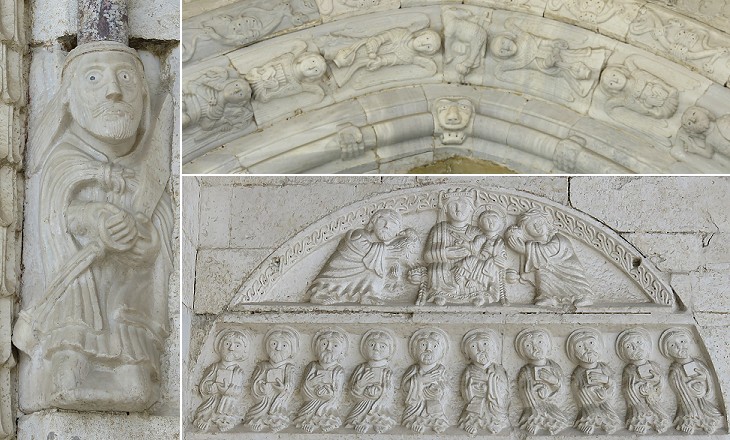 Southern side of the Cathedral: (left) King David in the right portal; (right-above) angels at the sides of the Lamb of God in the central portal; (right-below) relief from the previous cathedral dedicated to St. Vitaliano, Bishop of Osimo in the VIIIth century; it portrays ten apostles; Filippo Lombardo added the upper relief

Reliefs portraying ten apostles usually indicate that there was another separate relief or statue portraying St. Peter as in S. Pietro in Fermo, another town of the Marches. The ten apostles are portrayed after Jesus' appearance to them in the Hall of the Last Supper in Jerusalem (after the Resurrection) and before Matthew replaced Judas Iscariot.

Filippo Lombardo designed the interior and the crypt of the Cathedral. The former was greatly modified in the following centuries when the orientation of the church was changed. The crypt retains most of its original aspect, although some additions were made in the late XVIth century (e.g. the sort of second sarcophagus above that of St. Benvenuto). The image used as background for this page shows a capital by Lombardo.
In 1723 Francesco Guarnieri, Knight of Malta and member of a noble family from Osimo, captured an Ottoman ship near Anzio and he donated its flag to the Cathedral of his hometown. 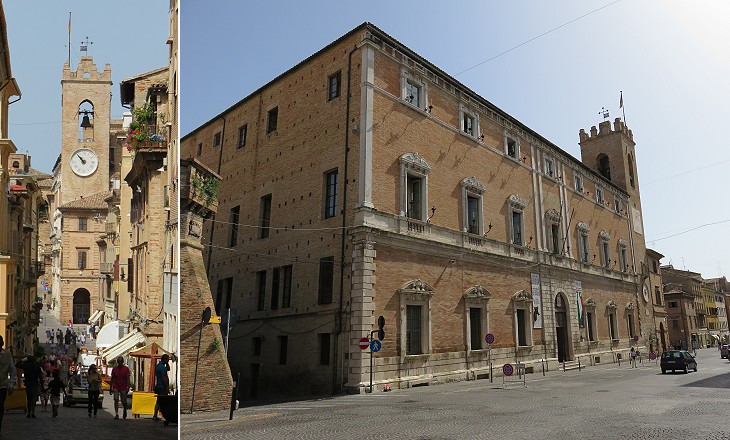 During the XIIth century many towns of Italy, including those belonging to the Papal State, became Comuni and were ruled by their inhabitants through political systems partly built upon those of Ancient Rome. Osimo retained some sort of independence until 1487. Pope Innocent VIII ordered the construction of a fortress around the Cathedral, but the Bishops of Osimo complained that they felt separated from their flock and in 1506 Pope Julius II agreed to pull it down. 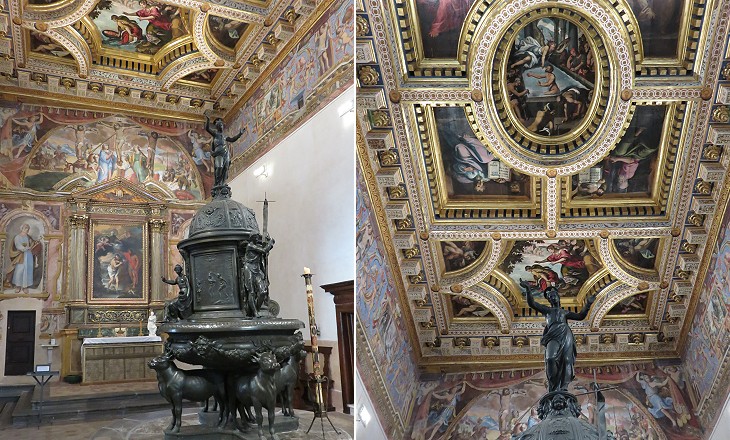 In many towns of the Marches there are monuments built by Pope Sixtus V who was born in this region. At Osimo the decision to turn an old church near the Cathedral into a richly decorated baptistery was taken by Cardinal Antonio Maria Galli, Bishop of Osimo, a young coppiere* of Pope Sixtus V who was created cardinal by his patron. He is best known for the improvements he made to the Basilica of Loreto.
*coppiere means cup-bearer and at the time of Galli it was a duty assigned to the most trustworthy persons, not just to servants. 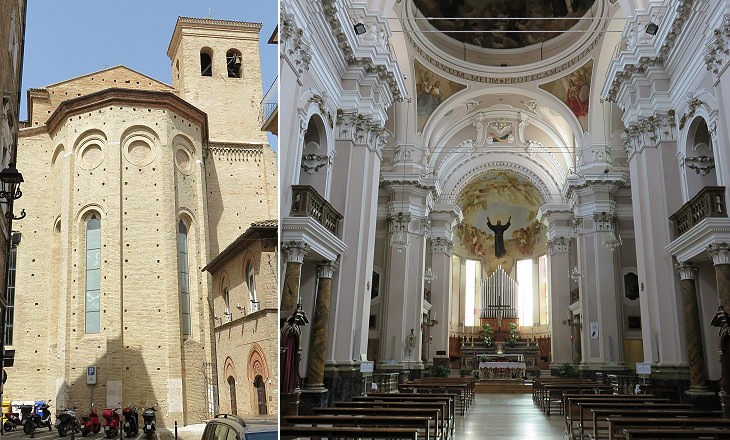 This large church belonged to the Franciscan convent of Osimo and it is still known as S. Francesco. The name was changed in 1781 after the interior of the building had been entirely renovated. Brother Joseph of Copertino was an embarrassment to the Catholic Church throughout his life (1603-1663) because he levitated in the air during his ecstatic visions and was therefore suspected of witchcraft. The Inquisition confined him to the smallest Franciscan convents and only shortly before his death was he allowed to join the convent of Osimo. He was beatified and canonized almost a century after his death. He is the patron saint of astronauts and of students passing examinations (because he was a particularly poor student). 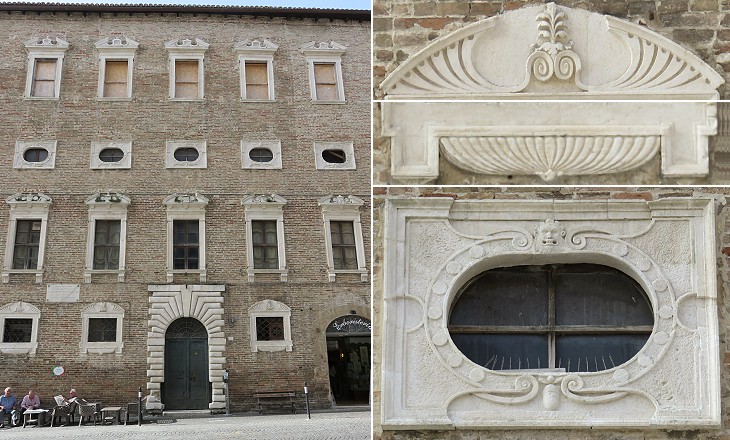 The Guarnieri were one of the most prominent families of Osimo. They had a Bishop of Osimo in the XIIIth century and other members of the family were bishops of Segni, Recanati and Loreto. The family became extinct in 1788 and their fine XVIIth century palace was bought by the Balleani Baldeschi from Jesi. 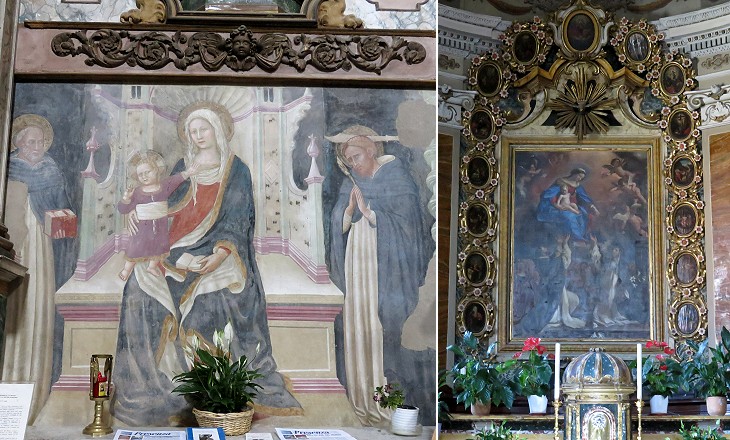 The churches of Osimo house interesting paintings from local or well-known artists and in addition the Diocesan and the Municipal Museums display other paintings from lost or deconsecrated churches.