In the XVIIIth century Rome was already renowned for its fountains and features of some of them can be seen in those of Vienna. The image used as a background for this page shows a detail of Fontana di Trevi, the best known XVIIIth century Roman fountain. 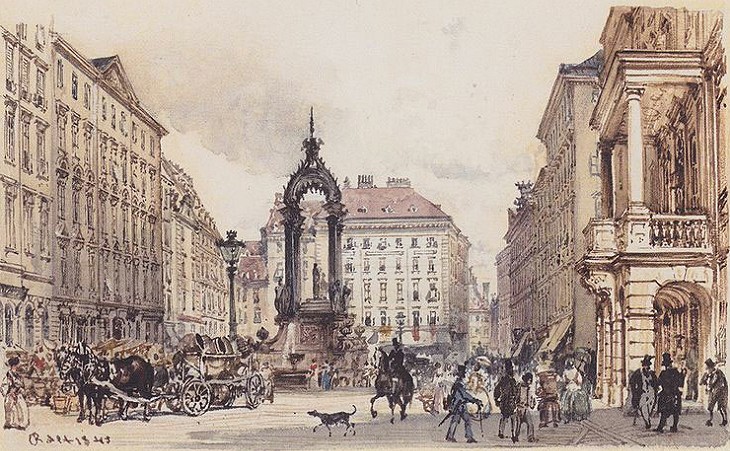 Vienna has some very noble public squares. (..) The best of these squares happen to be in parts of the city where the fashionable world does not often intrude; they are not planted, but excellently paved; they are not gaudy with palaces, but surrounded by the busy shops and substantial and comfortable dwellings of happy citizens, and are commonly adorned with some religious emblem (as at Graben) or a public fountain.
John Russell - A Tour in Germany, and Some of the Southern Provinces of the Austrian Empire - 1825
In origin Hoher Markt was decorated with a religious emblem, i.e. a wooden monument to the Marriage of Joseph and Mary which was erected to fulfil a vow made in 1702 by Emperor Leopold I for the safe return from the war of his son Joseph. It was replaced by a marble one at the initiative of Emperor Charles VI and in conjunction with the opening of a new water conduit. 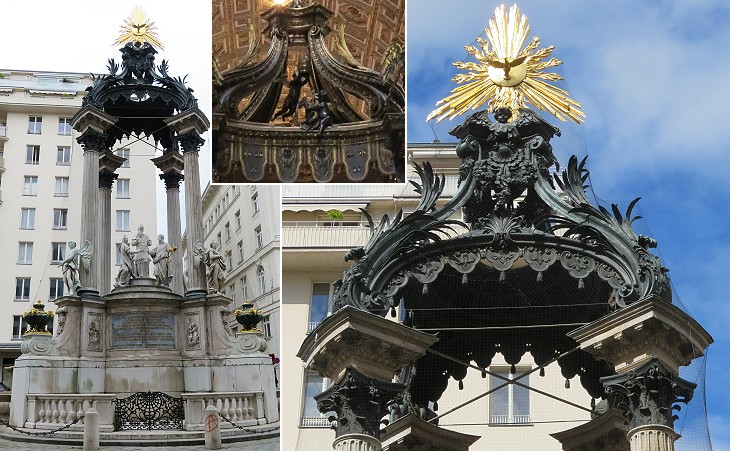 The fountain was designed in 1732 by Josef Emmanuel Fischer von Erlach with input from his father Johann Bernard. It is not a very Roman fountain in the sense that water plays a very minor role in its design, because of low pressure; the curved ends of the bronze canopy however are directly derived from the baldachin designed by Gian Lorenzo Bernini with the assistance of Francesco Borromini.
In 1948 some Roman houses of Vindobona were discovered under Hoher Markt.

(left) Donnerbrunnen in Neuer Markt (in 2005); (right) the River Traun

The municipality of Vienna commissioned in 1737 a fountain to Georg Raphael Donner, a sculptor who had learned the art from Giuliano Giuliani, a leading artist of the previous generation. Donner thought of providing Vienna with a Fountain of the Four Rivers, the name given to a fountain designed by Bernini for Pope Innocent X in Piazza Navona. It shows four naked figures representing the principal rivers of Austria, all tributaries of the Danube, which is symbolized by putti surrounding the statue of Providentia, a personification of good government.
Baroque artists used to surprise the viewer by placing parts of their sculptures (or paintings) outside the architectural elements (very often a niche, in the case of sculptures) which framed them. A fine example of this method by Melchiorre Caffa, a scholar of Bernini, can be seen in S. Agostino. In portraying the River Traun, Donner had an extraordinary idea; the river, portrayed as a young fisherman, is entirely outside the fountain and one is naturally inclined to go next to him to see if he actually manages to catch a fish. 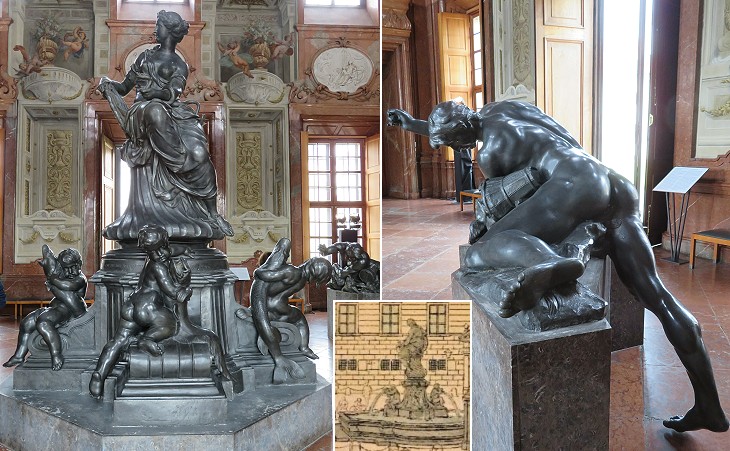 Donnerbrunnen originals at the Great Hall of Lower Belvedere; (inset) detail of an engraving showing that for a period the fountain was reduced in size and only the central group was left

The empress did not practise the sublime virtue of tolerance for what is called illegitimate love, and in her excessive devotion she thought that her persecutions of the most natural inclinations in man and woman were very agreeable to God. Holding in her imperial hands the register of cardinal sins, she fancied that she could be indulgent for six of them, and keep all her severity for the seventh, lewdness, which in her estimation could not be forgiven.
The Memoires of Casanova, by Jacques Casanova de Seingalt. Translation by Arthur Machen
The original statues were cast in lead and were removed in 1770 because Empress Maria Theresa was ashamed of their nakedness. Her successors placed them back at the fountain in 1801, but eventually they were replaced by copies. 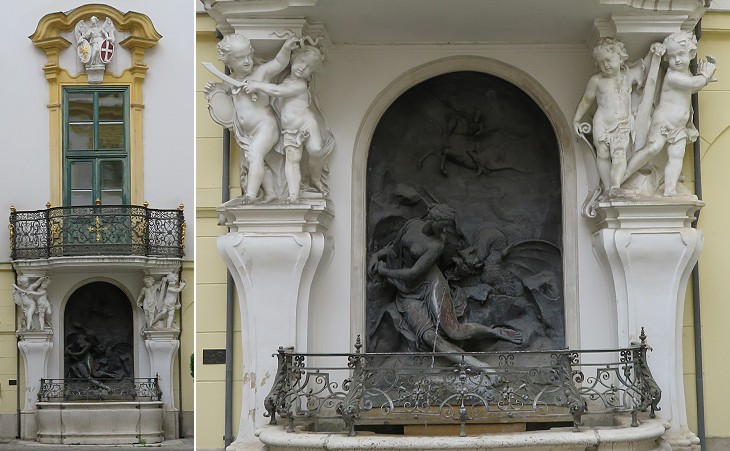 Rome had many Baroque fountains in the courtyards of private houses, in addition to the public ones. In 1741 the municipality of Vienna decided to embellish the courtyard of the Town Hall with an artistic fountain and commissioned it again to Georg Raphael Donner. 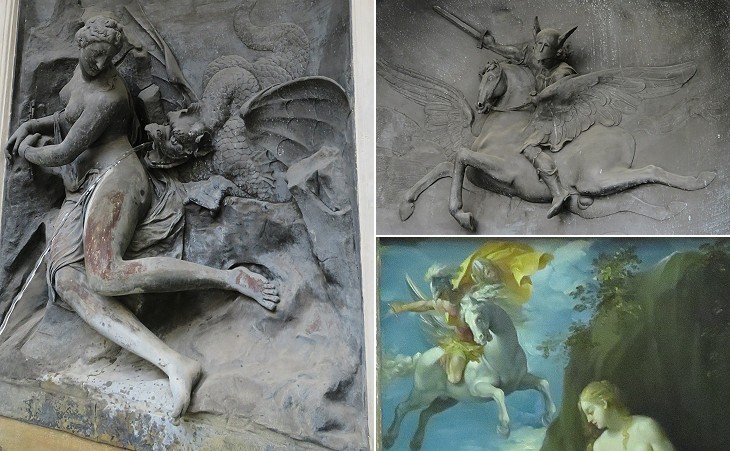 Andromedabrunnen in Altes Rathaus: details: (left) Andromeda; (right-above) Perseus and Pegasus; (right-below) the same in a 1602 painting by il Cavalier d'Arpino which was acquired by the Habsburgs in 1613 and is now at the Kunsthistorisches Museum

In 1737 Gian Gastone de Medici, the last of his family, died and the Grand Duchy of Tuscany was assigned to Francis Stephen of Lorraine, husband of Maria Theresa, at the time the presumptive heiress to Emperor Charles VI; in December 1739 the couple visited Florence and stayed at Palazzo Pitti for three months. They might have seen a fountain by Giambologna in the adjoining Boboli Gardens and a relief by Benvenuto Cellini at Piazza della Signoria, which both portrayed Perseus and Andromeda; this may explain the choice of the subject for the fountain, which was developed by Donner in line with a famous painting by Cavalier d'Arpino in the imperial collections. 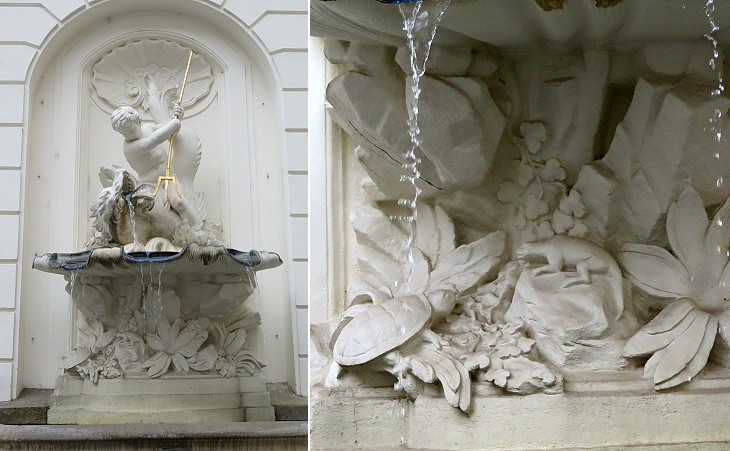 In Bernini's fountain in Piazza Navona the gigantic statues portraying the four rivers lay on a rock populated with animals and plants; these elements appear in a 1753 fountain embellishing a palace of the University of Vienna which today houses Akademie den Wissenschaften.

Vienna has two other fountains having the same subject as Donnerbrunnen, but not the same grace.
The 1846 fountain of Austria shows the main rivers of the empire: Danube, Elbe, Po and Vistula; the 1902 fountain in front of the huge Parliament building shows the main rivers of Cisleithania, the Austrian part of the Empire after 1867: the Rivers Po and Vistula were replaced by Inn and Morava.