We marched out at the stately Damascus gate, and the walls of Jerusalem shut us out forever. We paused on the summit of a distant hill and took a final look and made a final farewell to the venerable city which had been such a good home to us. (..) We came finally to the noble grove of orange-trees in which the Oriental city of Jaffa lies buried; we passed through the walls, and rode again down narrow streets and among swarms of animated rags, and saw other sights and had other experiences we had long been familiar with.
Mark Twain - The Innocents Abroad - 1869 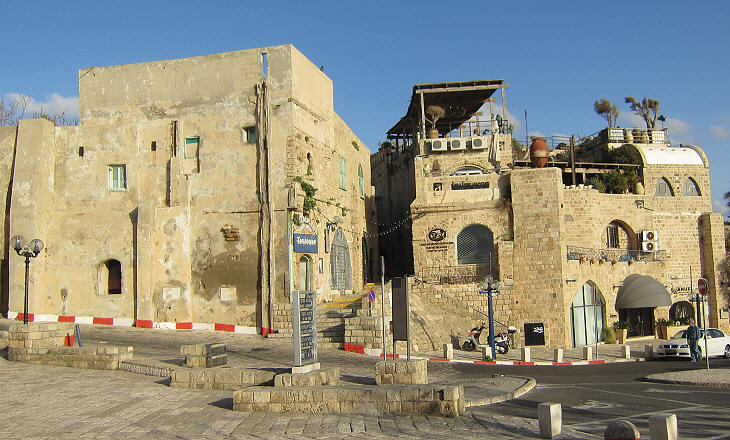 For the last half hour we rode along a narrow lane bordered on each side by the city gardens which abound in orange, lemon, almond, mulberry, olive and fig trees, sycamores, prickly pears and produce large quantities of tobacco. At a quarter before seven we entered the city by the sole gate, there were seven, but the Aga has shut up six to render the police of the city easier, on the left side of which was a small castle with four or five guns and on the right a beautiful small vineyard. The wall incloses the city on three sides, there being none towards the sea, and it has a fosse all round it, except at a castle on the south westerly corner.
William Turner - Journal of a Tour in the Levant - 1820
The walls of Jaffa do not exist any longer, but their location can be guessed by the remaining old houses of the town. 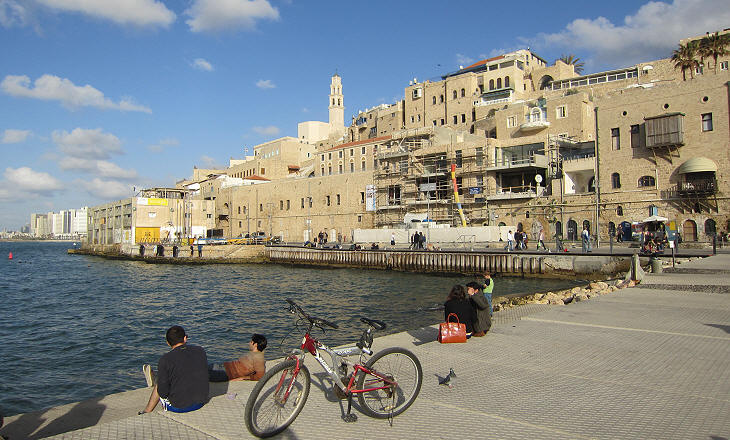 The old harbour and the Franciscan monastery on the hill

We rode through wretched small dirty streets and a narrow quay which was crowded with pilgrims departing for Constantinople, Damietta and Cyprus. (..) Crowds of these pilgrims are now lining the narrow quay under my window making a terrible noise preparing to embark; some crying for their baggage, some bastinadoed by the Turks and others remonstrating against the extortions of the boatmen who have raised the passage from the shore to the ships from fifteen paras to two piastres. Turner
We dismounted, for the last time, and out in the offing, riding at anchor, we saw the ship! I put an exclamation point there because we felt one when we saw the vessel. The long pilgrimage was ended, and somehow we seemed to feel glad of it. Twain 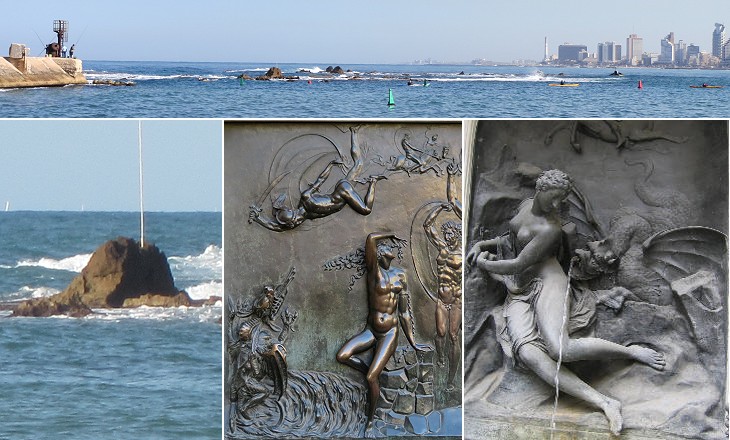 (above and below-left) Andromeda's Rocks; (below) Perseus freeing Andromeda at Florence (Cellini's Perseus) (centre) and at a fountain in Vienna by Georg Raphael Donner (right)

Joppa is situated on the side of a low hill over the sea; there seems to have been an ancient port, which might have contained great Vessels, but now large boats only can go into it. The ships ride in the open road, and are often obliged to go to sea in stormy weather. (..) This place is also mentioned by the ancients, as the scene of the adventure between Andromeda and Perseus. And St. Jerom says, that the ring to which the lady was fastened remained in the rock to his time.
Richard Pococke - A Description of the East and Some Other Countries - 1745.
The port which my window looks on is execrable being a long narrow shallow basin inclosed by rocks and the roadsted is unsafe in winter for the boats of the country. Turner
The timbers used in the construction of Solomon's Temple were floated to Jaffa in rafts, and the narrow opening in the reef through which they passed to the shore is not an inch wider or a shade less dangerous to navigate than it was then. Twain
As Perseus rounded the coast of Philistia he caught sight of a naked woman chained to a sea-cliff, and instantly fell in love with her. (..) Poseidon sent a flood and a female sea-monster to devastate Philistia and (..) the Oracle of Ammon told that the only hope of deliverance lay in sacrificing Andromeda, the king's daughter, to the monster. She was therefore chained to a rock, naked except for certain jewels, and left to be devoured. (..) Perseus grasped his sickle and, diving miraculously from above, beheaded the approaching monster.
From Robert Graves - The Greek Myths - Collins I went to the Latin convent, where European pilgrims are received. It is said to have been the house of Simon the tanner. But the tradition is more probable that it was on the site of an old convent, near the European burial ground, over the sea, at a place where there are tanpits, which may have been made of late years. Pococke
We were well received by the Vice Consul's son, who, as he had not expected us, had not prepared the only habitable chamber and put us into such a filthy room that I went to the convent, to the superior of which Padre Clemente had given me a letter, to sleep. (..) I supped with my companion at the Vice Consul's whose house is close to the wall of the city on the south west and slept most soundly at the convent. Turner
The church was built in 1888-1894, whereas the convent dates 1650 and it stands on the site of a Crusader castle built by King Louis IX of France. 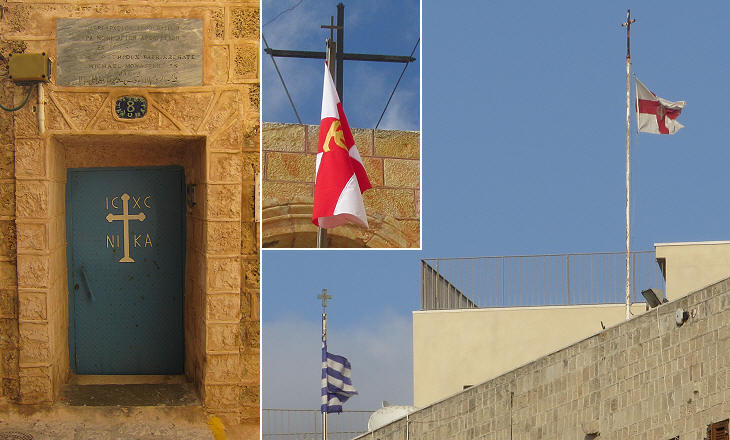 All the other religions have their convents at the foot of the hill near the sea, with conveniences for receiving a great number of pilgrims, who often wait here to go with the caravan to Jerusalem before Easter, and to embark when they return. Pococke
Whenever one sees a Franciscan church/monastery/hostel in the Holy Land, he/she can be sure to see a similar Greek Orthodox building in its proximity. Roman Catholics and Greek Orthodox never share a hostel or a hospital for pilgrims; at Nazareth they claim the Annunciation occurred in two different locations, in the Holy Sepulchre they have two different holes marking the site where the Cross stood and because of the different calendars, they do not celebrate Christmas and Easter on the same days. 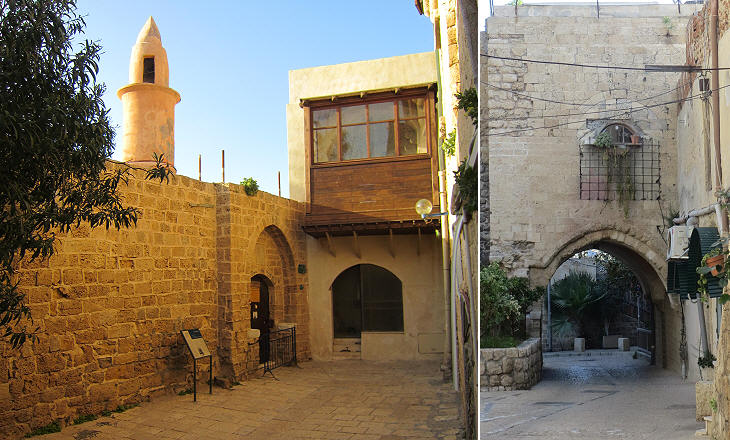 (left) A corner of Old Jaffa near the House of Simon the Tanner; (right) another old building

They have a great trade at Joppa in soap, which is not only made here, but likewise at Jerusalem, though commonly sold under the name of Joppa soap, and it is from this place that Egypt is chiefly supplied; it is made of the oyl of olives and ashes. Pococke
Simon the Tanner formerly lived here. We went to his house. All the pilgrims visit Simon the Tanner's house. Peter saw the vision of the beasts let down in a sheet when he lay upon the roof of Simon the Tanner's house. It was from Jaffa that Jonah sailed when he was told to go and prophesy against Nineveh, and no doubt it was not far from the town that the whale threw him up when he discovered that he had no ticket. Jonah was disobedient, and of a fault-finding, complaining disposition, and deserves to be lightly spoken of, almost. Twain 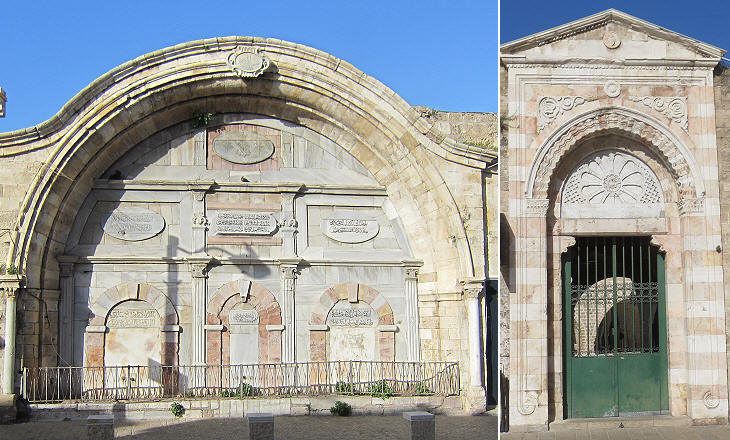 To the right on entering the gate is a pretty fountain. W. Turner
During the XIXth century the Ottomans made some attempts to improve facilities for pilgrims en route to Jerusalem. 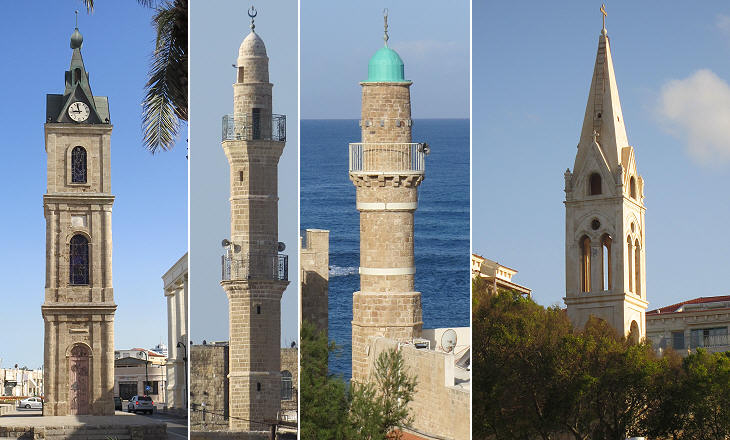 At the beginning of the XXth century Ottoman Sultan Abdul Hamid II decided to celebrate his accession to the throne by erecting a series of clock towers (at Constantinople near Dolmabahce Sarayi, his residence on the Bosporus). Some of these clock towers were eventually pulled down including that in Jerusalem, but at Acre and Jaffa they are still a landmark. In 1947-1948 Jaffa was the site of fierce fighting between Jews and Arabs during which some buildings were blown up. It was eventually united to Tel Aviv, but its population is still mainly Arab. 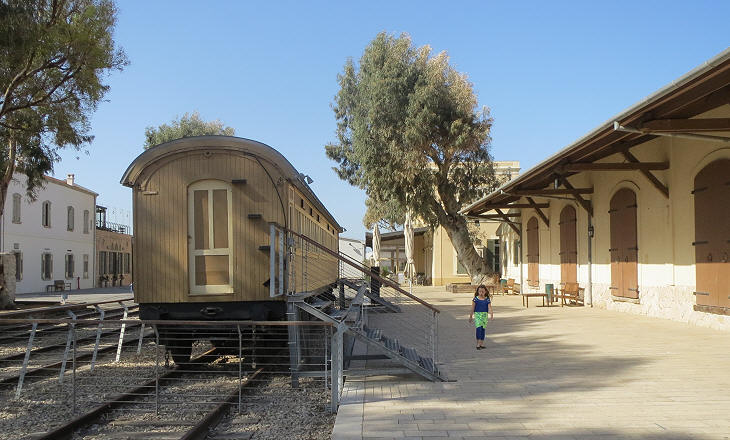 In 1890 Ottoman authorities authorized a French company to build a railway between Jaffa and Jerusalem. The line was completed in 1892. The railway station was built at some distance from the northern walls of Jaffa. The station was closed in 1948. Today it houses shops and cafés. Tel Aviv seen from the archaeological park of Jaffa

The journey in the Holy Land of William Turner and Mark Twain ended at Jaffa from where they sailed for Alexandria. They could not, but you may wish to glimpse at Tel Aviv.
The image used as background for this page shows a modern fountain depicting Jonah's whale.