Palazzo Rospigliosi
(Vasi at work in the Grand View of Rome) 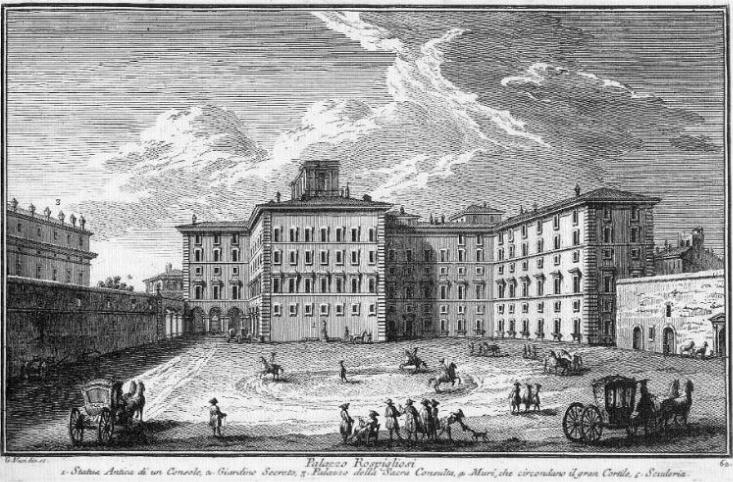 In 1754 Giuseppe Vasi chose Palazzo Rospigliosi for the second etching of the book showing the finest palaces of Rome. The building might as well have been included in the book covering the finest villas, which he published in 1761, because it was surrounded by gardens and it did not stand directly on a street or a square. In order to take his view Vasi had to enter the great courtyard which was closed by high walls.
The view is taken from the green dot in the small 1748 map here below. In the description below the plate Vasi made reference to: 1) Ancient statue of a Roman consul; 2) Secret Garden (aka Il Teatro); 3) Palazzo della Consulta; 4) Walls around the courtyard; 5) Stables. 3) is shown in another page. The dotted line in the small map delineates the border between Rione Trevi (left) and Rione Monti (right). 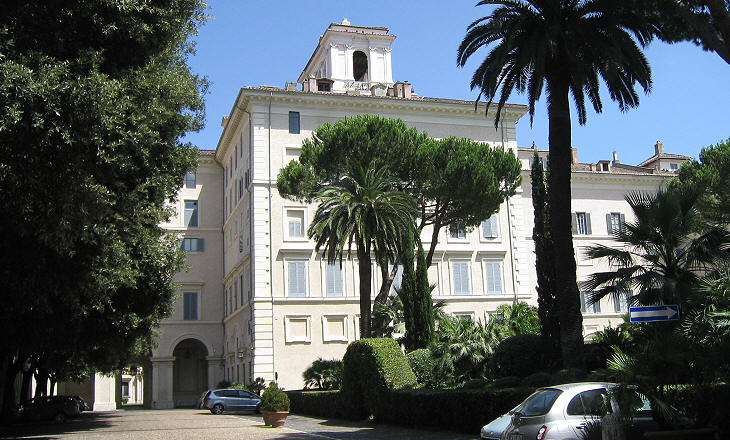 The view is very much as it was in the XVIIIth century, the only evident change being the garden which has replaced the cavallerizza, the horse training ground which you can see in the image used as background for this page.
The loggia is perhaps that which enjoys the most comprehensive view of Rome. You may wish to see a page on Roman loggias or try to locate the Rospigliosi loggia in a Grand View of Rome from Castel Sant'Angelo. 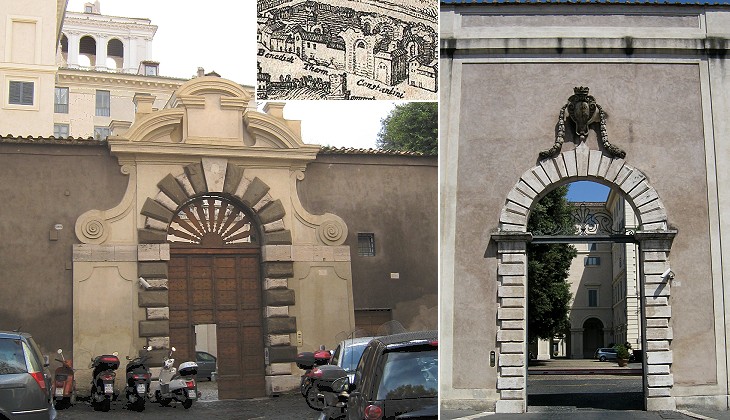 The complex was initially built by Cardinal Scipione Borghese, nephew of Pope Paul V, as a summer residence near that of his uncle at Palazzo del Quirinale. The main entrance was penalized by the construction of Palazzo della Consulta in 1732-1737; for this reason a small door on the wall along Strada di Monte Cavallo was turned into the main access to the palace; the old gate can still be seen in a narrow street behind Palazzo della Consulta. 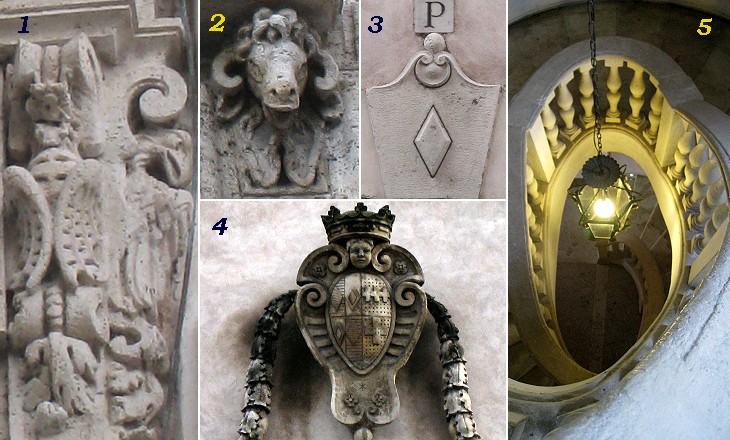 In 1616 Cardinal Borghese sold the property to the Altemps, because in the meantime he had completed Villa Borghese outside the walls of Rome. The Altemps were followed as owners by the Lante and by the Mancini, relatives of Cardinal Jules Mazarin; the palace was the first Roman residence of Queen Christina of Sweden (you may wish to read some remarks about her when she lived there by Francis Mortoft).
In 1704 the property was bought by Giovanni Battista Rospigliosi and his wife Camilla Pallavicini. He was Duke of Zagarolo and nephew of Pope Clement IX and she was the niece of Cardinal Lazzaro Pallavicini, a member of a very rich Genoese family, and her dowry included Gallicano and Colonna, two very small towns near Zagarolo. The marriage contract established that the first son would have been a Rospigliosi and the second one a Pallavicini. The two branches of the family lived together in the palace, but in the XXth century the Rospigliosi sold their stake so that today the Pallavicini are the only owners. They still reside in a part of the palace, while the rest of the building is occupied by tenants or rented for meetings/ceremonies (see the website detailing the available facilities - it opens in another window). Another small Palazzo Pallavicini is situated in Rione Campo Marzio. 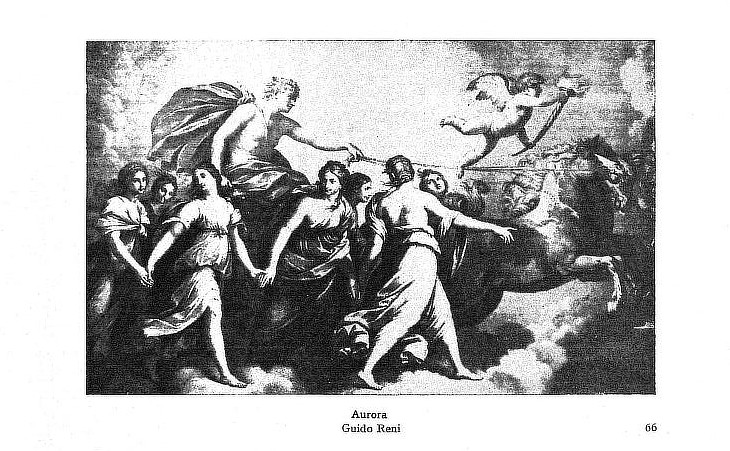 Illustration from H. A. Guerber - The Myths of Greece and Rome - 1913 showing a part of Aurora by Guido Reni (see the real complete painting - it opens in another window)

On the Ceiling is the Aurora of Guido; which being pretty high, the Figures are bigger than Life: a Gay Subject, and that Enchanting Painter the fittest of any to excute it; and he has done it accordingly. 'Tis Beautiful, Gracious, and the Airs of the Heads Exquisite! (..) For the three parts of the Morning the Italians have as many Names, Alba, Aurora and Mattina; and all these are express'd in this Picture: the First by a Cupid bearing a Torch representing the Morning Star, which is very bright at the first opening of the Day; Aurora, a Figure of a Young Woman in the Clouds dress'd in White and Yellow carrying Flowers; and lastly Apollo in his Chariot drawn by Horses, pushing away the Clouds, and substituting Glory in their place; and to express the Chearfulness of this Sweet Time, the Hours Hand in Hand come on with great Alacrity.
Jonathan and Jonathan Richardson - Account of Some of the Statues, etc. in Italy - 1722
The Pallavicini own a very fine collection of paintings, but the only work of art which is accessible to the public on an ordinary basis (on the first day of the month only) is that which gives the name to Casino dell'Aurora, a small building of the time of Cardinal Borghese. The painting was very highly praised and the subject was picked up again in 1621 by il Guercino (it opens in another window) in the decoration of the small casino of Villa Ludovisi aka Casino dell'Aurora. 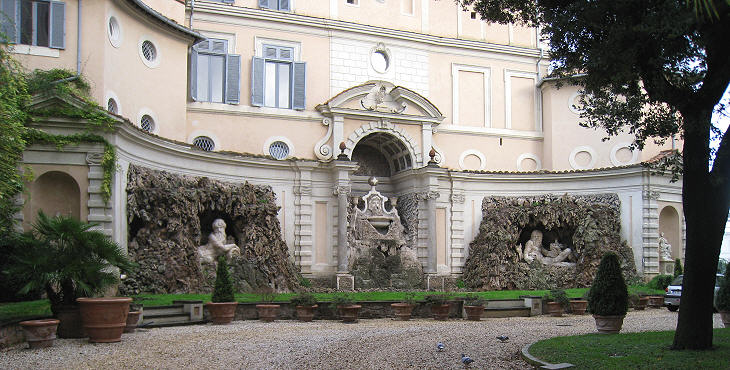 Nymphaeum known as "Il Teatro" (a similar name was used for the large fountains in the villas of Frascati, e.g. Villa Torlonia, a former possession of the Borghese)

With wealthy enough looks and as bold as brass a visitor can tell the security guards that he has urgent business matters to discuss with one of the lawyers or institutions who have their offices in the main building and then head towards the secret garden mentioned by Vasi. 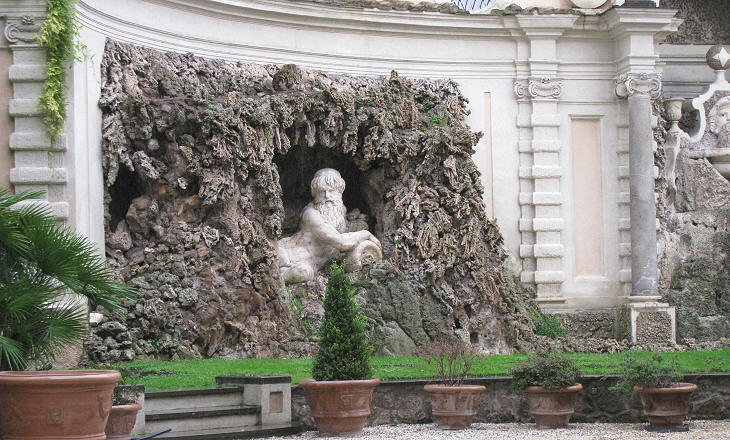 The garden belongs to the time of Cardinal Borghese and it was designed by Giovanni Vasanzio; the statues of the rivers are by Francesco Landini; they are evocative of two gigantic statues of rivers which embellished the baths of Constantine and which were relocated to Piazza del Campidoglio. A third garden stood on the back of the building, but it was demolished in the 1870s to make room for Via Nazionale. 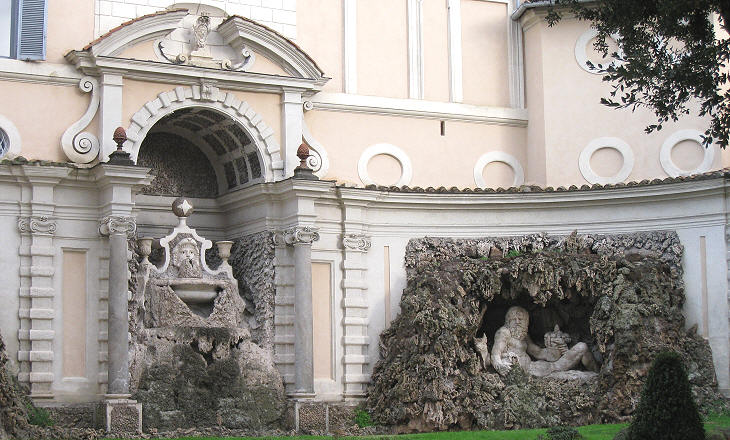 The artificial grottoes where the statues of the rivers are located were a common feature of villas of the XVIth/XVIIth centuries. They all were designed after Ninfeo di Egeria at Valle della Caffarella, which by the way was a property of Cardinal Borghese. You may wish to see the grottoes of the Boboli Gardens in Florence.

Next plate in Book 4: Palazzo Colonna.
Next step in Day 3 itinerary: S. Silvestro a Monte Cavallo.
Next step in your tour of Rione Monti: Palazzo della Consulta.