- Palermo: Museums and archaeological areas
(left) Temple to Hercules at Agrigento; (right) detail of the apse of Palermo's Cathedral 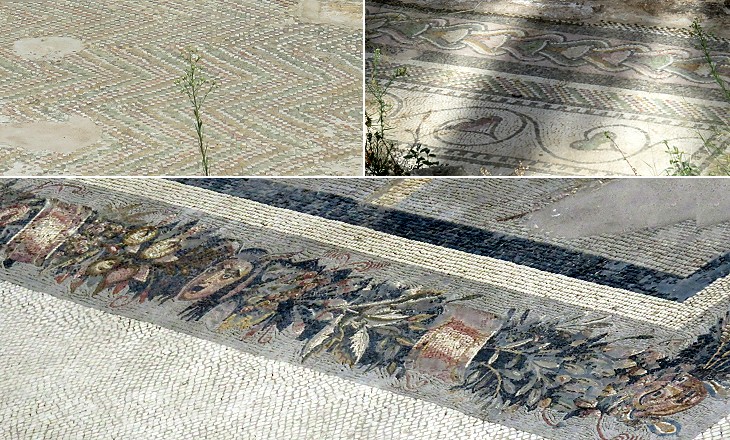 July 1790. We can form an idea of the ports, theatres, and temples of Panormus, only from the descriptions of different authors, who wrote while they were in existence; for at present all the monuments of the Greek and Roman eras are swept away, except the collection of statues and inscriptions, preserved in the Senate House. (..) There is not now even the slightest vestige ot its ancient port, which entered into the heart of the city, and conveyed vessels to the very doors of the inhabitants.
Sir Richard Colt Hoare - A Classical Tour through Italy and Sicily - published in 1819.
In 1868 some Roman floor mosaics were found in the square in front of Palazzo dei Normanni and in line with the practice of the time they were moved to the Archaeological Museum. Other mosaics in the same area were found in 1915 and it was decided to leave them in situ. They belonged to a house of the IIIrd century AD. 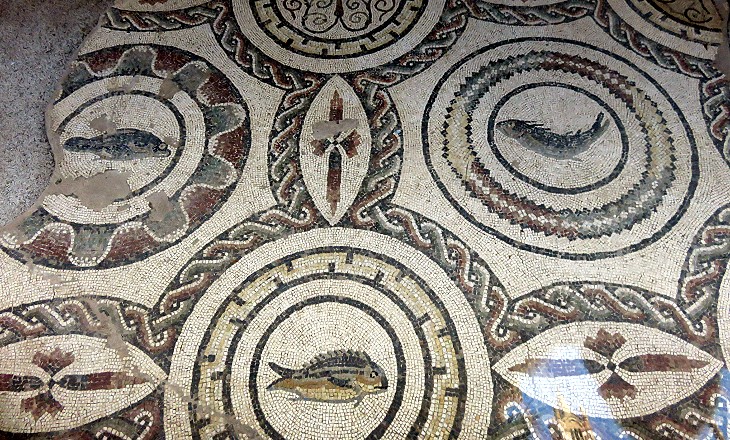 Floor mosaics of a Roman house behind the Cathedral

In 2000 other Roman mosaics were found by chance in the square on the back of the Cathedral. These mosaics belonged to an earlier house. Similar to those at Villa del Casale they were most likely made by craftsmen from the Province of Africa, today's Tunisia. The excavations identified also a section of a Roman street. These findings are helping archaeologists in determining the urban layout of the ancient town. It covered a much smaller area than that of Arab Palermo which in the Xth century is said to have reached 100,000 inhabitants or more. 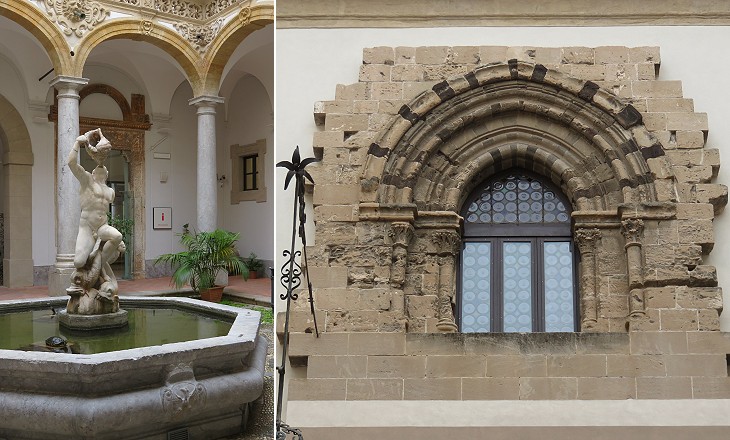 The Regia Università degli Studii was founded by Ferdinand I, in 1806; and the Hall of Sculpture, which enriches this University, owes its most valuable treasures to the remains of Selinuntium.
Mariana Starke - Travels in Europe for the Use of Travellers on the Continent and likewise in the Island of Sicily - 1838 Edition - based on a travel to Sicily made in 1834.
In 1870 the exhibits of the University were moved to a former house of the Congregation of the Oratory of St. Philip Neri. The museum was eventually named after Professor Antonino Salinas who was its Director in 1873-1914 and who greatly enriched its collections. The building was embellished with statues and architectural details from palaces and churches of Palermo. 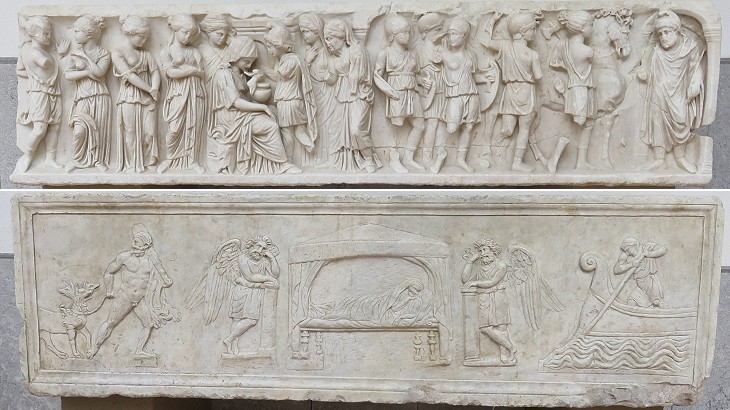 The great majority of the exhibits come from archaeological excavations at Agrigento, Solunto, Tindari (the image used as background for this page shows a statue from Tindari), Selinunte and other Sicilian locations. Two interesting Roman sarcophagi embellished churches in Palermo and they most likely were found in the city. That from Casa Professa, the headquarters of the Jesuits, depicts a scene from Posthomerica, a poem of the IVth century BC telling the story of the Trojan War after the death of Hector. At the centre of the scene Andromaca is seated with the cinerary urn of her husband; she is consoled by Paris and Ecuba; a number of Amazons are shown at the sides of the central scene; they followed Penthesilea, their queen, who came to the rescue of Troy after Hector's death and was eventually killed by Achilles.
The sarcophagus from S. Francesco depicts on the left Hercules with Cerberus, the guardian of the Underworld and on the right Charon, the ferryman of the Underworld. In the centre two winged old genii (sorts of guardian angels) mourn a woman on her deathbed.
Both sarcophagi show excellent workmanship. They were most likely bought at Ostia, but they could have been made elsewhere (you may wish to see a page on the trade of sarcophagi in the Roman Empire and a list of sarcophagi which are shown in this website). 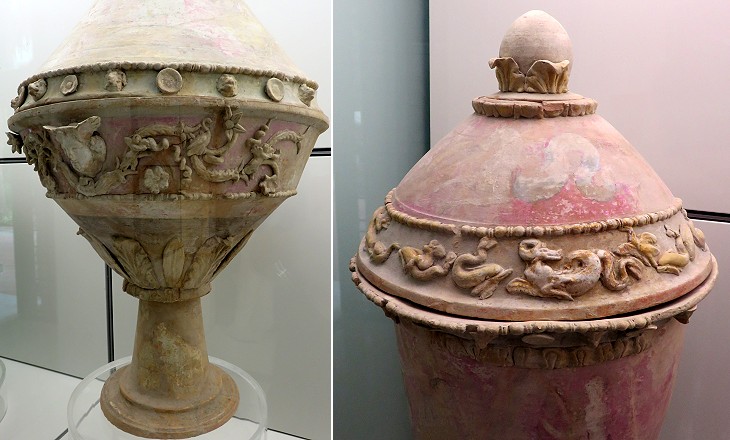 Centuripe was an ancient town in the interior of Sicily. Some extraordinary vases were found in tombs in its territory. They bring to mind works by Pittore di Lipari, but some doubts have been raised about their authenticity. In the 1930s ancient paintings and potteries said to have been found in tombs at Centuripe were eventually declared skilful forgeries. 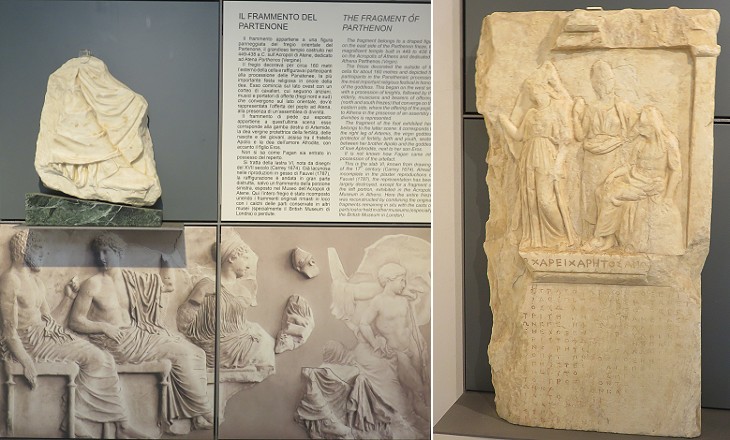 Museo Archeologico Regionale Antonino Salinas: Fagan Collection: (left) fragment (part of a goddess's leg) from the Parthenon frieze; (right) inscription from Athens with the appointment of a "proxenos", a sort of honorary consul

Robert Fagan (1761-1816), an Irish painter, undertook some of the very first excavations of Ancient Ostia. In 1809 he was appointed British consul in Sicily where he continued to search for antiquities. He was very active in the antiquarian market and most likely he received a fragment of the Parthenon frieze from Lord Elgin, British ambassador to the Ottoman Empire. It was eventually acquired by the University of Palermo together with other exhibits of the Fagan collection. 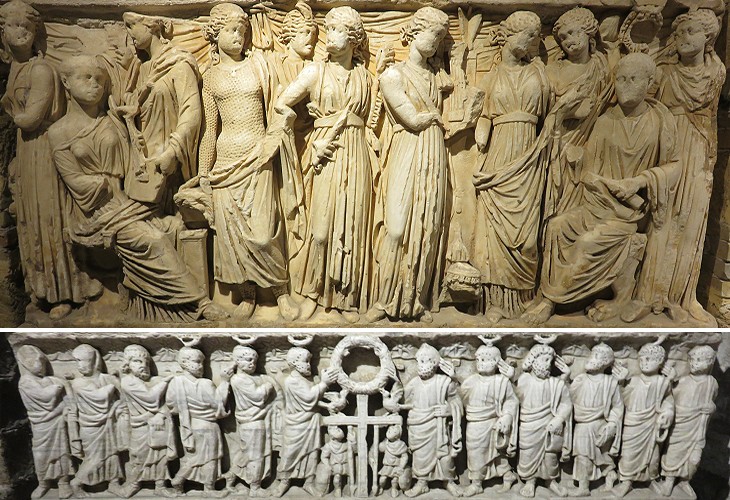 Crypt of the Cathedral: ancient sarcophagi: (above) Apollo and the Muses crowning a poet and his wife; (below) Christian sarcophagus

The crypt of the Cathedral houses the funerary monuments of 24 archbishops of Palermo. The large majority of them were laid to rest inside ancient sarcophagi which in some instances were modified by adding coats of arms and inscriptions or by providing them with a completely new lid. It is very likely that they were found in Palermo or in its environs. 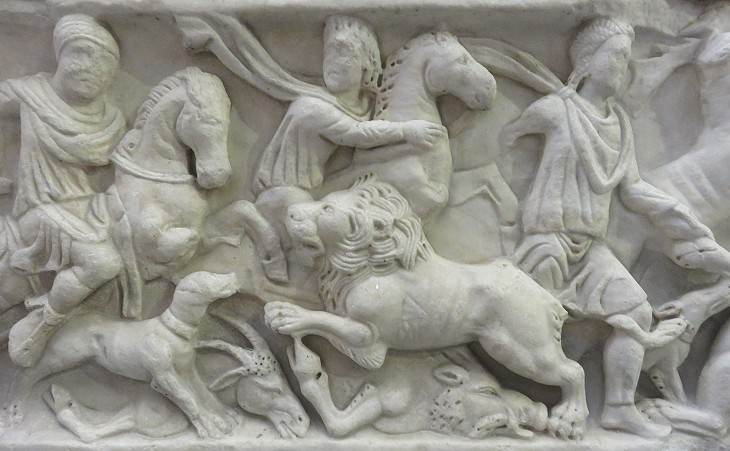 Cathedral: Chapel of the Royal Tombs: detail of the sarcophagus of Costanza d'Aragona, first wife of Frederick II, King of Sicily and German Emperor

The Cathedral houses another interesting Roman sarcophagus which depicts a lion hunt. The subject was felt to be appropriate for a royal tomb (one of the hunters seems to wear a crown) and the sarcophagus was used for Costanza d'Aragona. Her marriage to Frederick established the first link between the House of Aragon and Sicily. A second family bond was established in 1262 when another Costanza, granddaughter of Frederick married King Peter III of Aragon. In 1282, after the Sicilian Vespers, the crown of Sicily was offered to Costanza and her husband. 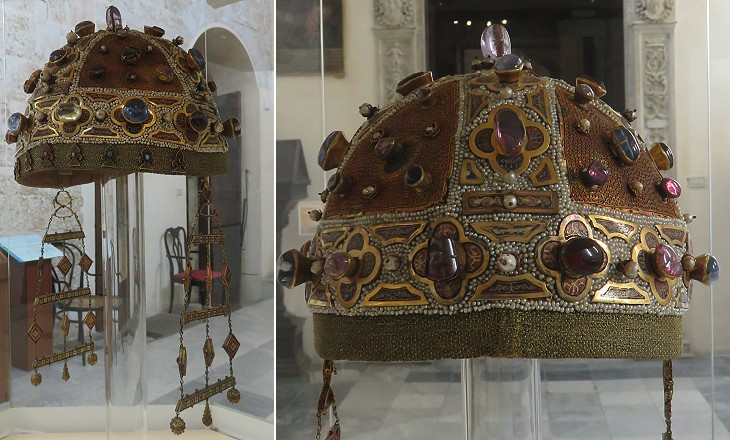 Treasury of the Cathedral: crown of Costanza d'Aragona

Constantia Imperatrix ... inventa cum corona reali ornata multis lapidibus pretiosis et pernis magnis et parvis et auro masiczo. (The body of Empress Costanza was found with a royal crown decorated with many precious stones and pearls, both large and small, and with solid gold). This is the account of what was found in the sarcophagus when it was opened in 1491.
This unusual type of crown was a kamelaukion (camel skin hat) and it was used by the Byzantine emperors of the time as shown by mosaics at Hagia Sophia in Constantinople. It is from this crown that the Popes developed camauro, a red cap with ermine trim, which you can see in the icon of Abridged History of Rome at the end of this page and in busts of Pope Urban VIII by Gian Lorenzo Bernini. Art historians agree that the crown was made in Sicily, although it followed a Byzantine pattern. Galleria Regionale di Palazzo Abatellis: (left) gravestone of Pietro Antonio Guerriero (1521); (centre) XIVth century Andalusian vase from a church of Mazara del Vallo (you may wish to see other Andalusian wares from Spanish museums - it opens in another window); (right) XVth century coats of arms of the Pope (perhaps Nicholas V) and of the House of Aragon Kings of Sicily

The museum of Palazzo Abatellis is chiefly a gallery of paintings. It houses however a number of statues, reliefs and other exhibits, mainly from lost churches and palaces of Palermo. 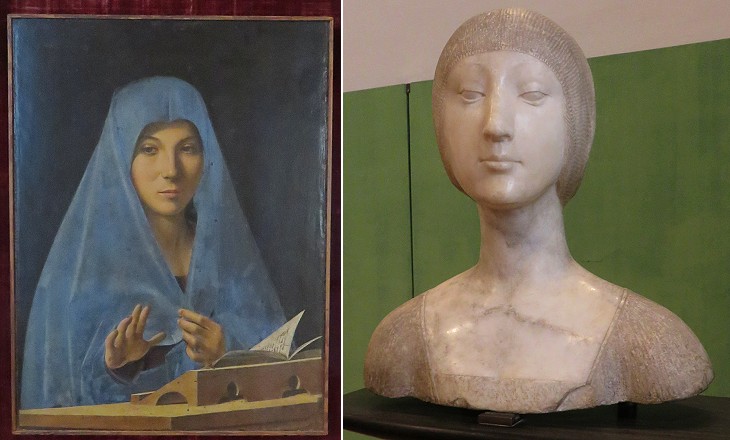 Early Renaissance in Sicily is documented by one of the last works by Antonello da Messina, a Sicilian painter who visited many Italian locations (Naples, Rome, Tuscany, the Marches and Venice) where he had the opportunity to see some Flemish portraits, in addition to becoming familiar with the local schools of paintings.
Francesco Laurana was a sculptor from a small town north of Sebenico in Dalmatia, from where many good sculptors came to work in Italy. He was not a relative of Luciano Laurana, an architect from the same town who designed Palazzo Ducale at Urbino. He mainly worked in Naples and in France, but he spent four years in Sicily (1467-1471) during which he made a series of busts portraying local noblewomen, in addition to reliefs and statues for churches. 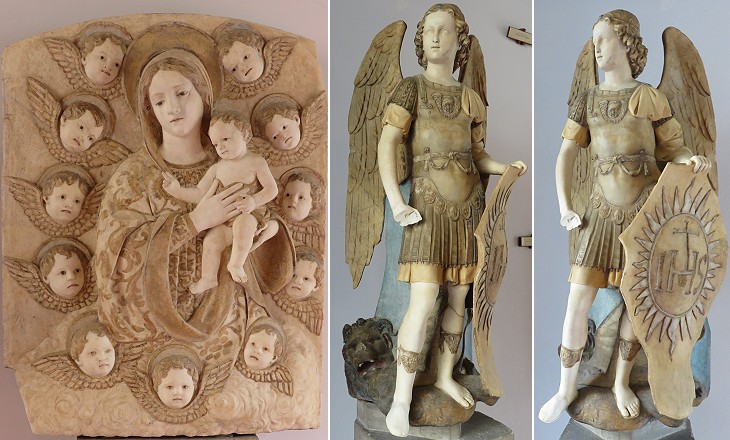 Domenico Gagini, his son Antonello and the three sons of the latter were instrumental to the development of a Sicilian Renaissance sculpture school. Their works influenced local sculptors and while the big cities (e.g. the cathedrals of Messina and Palermo) have statues and reliefs made by the Gagini, a lot of minor towns (e.g. Erice and Agrigento) have "school of the Gagini" statues, especially madonnas. 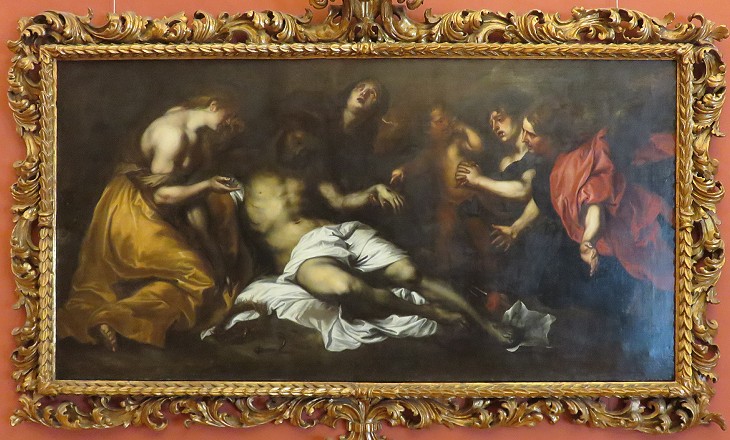 In 1621 Anthony Van Dyck, a young assistant to Peter Paul Rubens, began a long journey through Italy to complete his artistic education, similar to what his master had done in 1600. He was mainly based in Genoa, but he spent some 18 months in Palermo, where his paintings were highly praised (he received commissions even after he had left the town, e.g. for Oratorio del Rosario di S. Domenico). His Lamentation of Christ shows the desperation he found at Palermo which during his stay was stricken by a major pestilence. It ended only when the body of St. Rosalia was found on Mount Pellegrino.