The fourteenth day (from Smyrna en route to Persia), after a Journey of seven hours we pass'd by the Walls of Aphiom-Carajsar , that is, The Black, City of Aphiom or Opium; because it has a Prospect over a fair and large Country well cultivated, where they sow great store of Poppies, whence they draw their Opium or Aphiom, as the Turks call it.
Jean-Baptiste Tavernier - Travels through Turkey and Persia (1630s-1650s)
A new feature has appeared in the landscape; the fields of opium are all in bloom, forming a very beautiful object; but these flowers are not so gay as our garden poppies. They are all luxuriant plants of the single poppy, three feet high, their colours being white, lilac, and purple, in nearly equal proportions. The business of collecting the opium has just commenced. The green seed-pod is wounded or scratched with a delicate point, when the milky sap exudes; this is afterwards collected by scraping, and a purifying process is all that is then required to produce the opium fit for the market. The work is chiefly done by women, a delicate hand being required throughout the process; and as the whole harvest may be destroyed by a shower, the crop is a precarious one. The entire produce is monopolized by the Government at a fixed price, and the sale of opium is not allowed in any part of the country. (..) I have never seen a Turk under the influence of opium; and I believe that the use of this stimulant is confined to the licentious inhabitants of the capital.
Charles Fellows - Journal Written during an Excursion in Asia Minor in 1838
Today a controlled production of poppies is purchased by the state for the making of medicines. 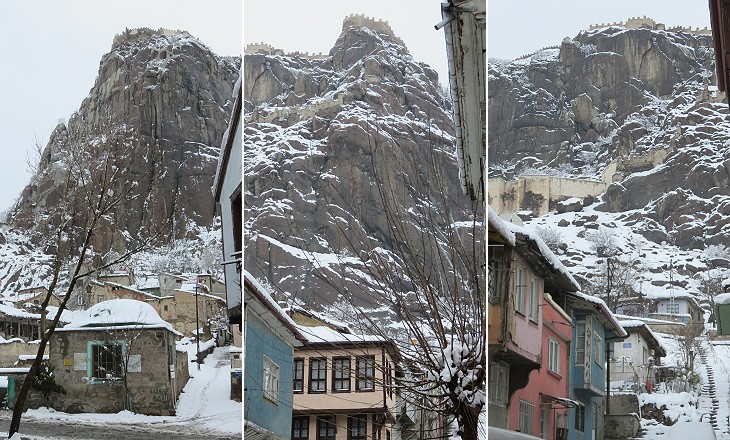 We started soon after seven passing over the low hills to the west of the plain. Here we saw several fields of poppy much cultivated in the neighbourhood and from which the town of Afiom Kara Hissar has derived its name. I was at first much struck with the neglected appearance of the plain there being but little cultivation. The only thing which arrested my attention was the bold rock which rises up in the centre of the town and on whose almost inaccessible summit are the ruins of a fort either Byzantine or Turkish.
William Hamilton - Researches in Asia Minor, Pontus and Armenia - 1842
The rock stands some 200m/650ft above the old part of the town and it was first fortified in the late second millennium BC. 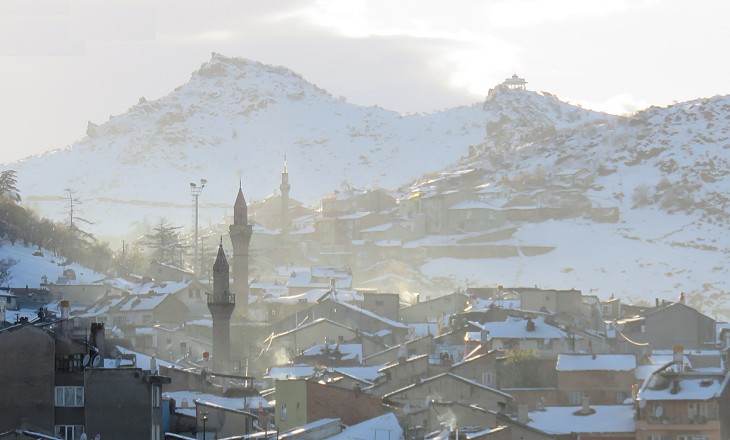 It was very cold frosty weather and we ascended with great difficulty some low mountains covered with snow being obliged to walk a great part of the day and not having water with us. I was so exceedingly thirsty that I drank of the snow water wherever I could find it without any other effect. In about three days as I imagined it caused my arms to break out in blisters in several parts something in the manner of St Anthony's fire. (..) On the twenty-second (of March) we descended the hills for two hours into a large plain extending beyond view to the east and at the foot of them came to Carahissar. It is situated at the foot of the mountains round a very high rock about half a mile in circumference on the top of which they have built a fortress.
Richard Pococke - A Description of the East, and Some Other Countries - 1745
The tableland where the town is situated has an average altitude of 1,000m/3,300ft and snowstorms can occur well into April (see the castle during a snowstorm in the introductory page). 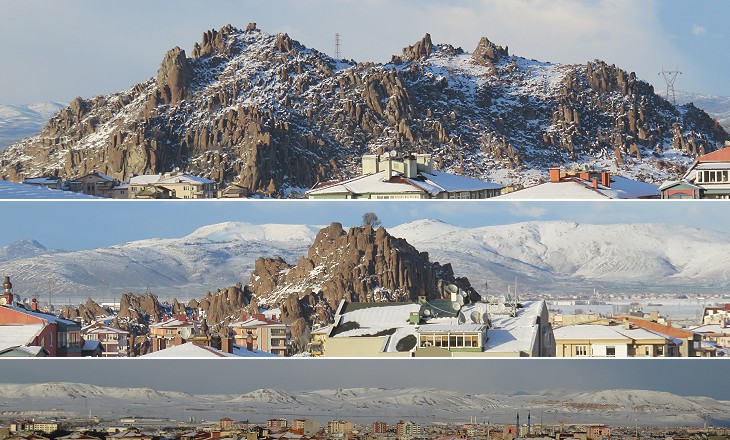 Views over other rocks and the tableland on April 10, 2015

There is to be seen in that City an ancient Castle of Free-stone upon the Point of a high Rock, separated from the Mountains that are next it toward the South, which make a Semicircle. Tavernier
Besides the Castle hill or Acropolis several smaller detached hills of red trachyte (an igneous volcanic rock) rise up to the north extending round it in an apparently semicircular line. Hamilton
The Anatolian tableland is best known for the eroded rocks of Cappadocia (which at Uchisar bear some resemblance with those at Afyonkarahisar), but many other locations are worth being visited for their rocks, both for their shape and size and for how men made use of them (e.g. Kale Kapi and Eski Gumus). Archaeological Museum: a Roman emperor (left) and Heracles (right) in the snow

Aphiom-Carajsar is a great City, dirty and ill built, the ancient Name whereof I could never learn, for the Greeks and Armenians are very ignorant. But acccording to all probability and the situation of the place, it ought to be the ancient Hierapolis situated upon the Meander, a famous River of the Lesser Asia, that winds and turns the most of any River in the World. And indeed we are the more to seek, in regard the Turks change the ancient Names according to their own custom and pleasure, and give no other Names to Rivers than that of the principal City through which they pass or else deriving their Names from the Colour of their Sands. Tavernier
The first European travellers who visited Afyonkarahisar had an in-depth knowledge of the books written by ancient historians and geographers. Their first worry in visiting a town which had some Greek/Roman remains was to find out its ancient name. Pococke believed Afyonkarahisar to be Prymnesia, a town mentioned by Ptolemy. Hamilton instead assumed it was Synnada, a town known for its quarries and mentioned by Pliny and Strabo. Today historians have come to the conclusion that its ancient Greek name was Akroinon (On the Peak) and that in 740 it was changed into Nikopolis (City of Victory) by Byzantine Emperor Leo III after he defeated the Arabs near the town. 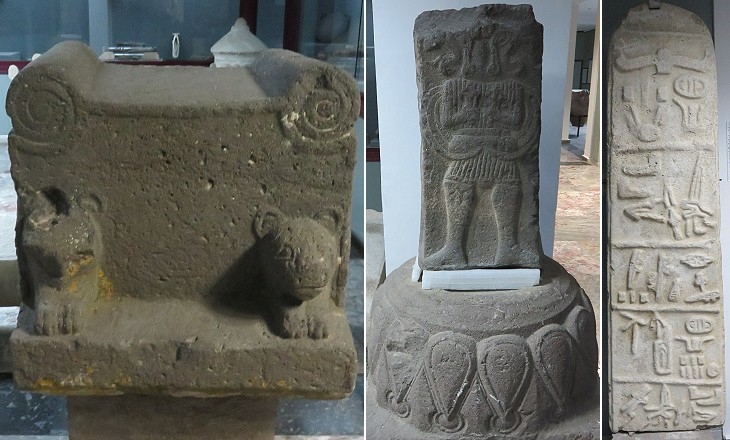 Afyonkarahisar does not retain monuments of its ancient past, so one must visit its Archaeological Museum to learn something about it. The town and its province were part of the Hittite Empire which had its capital at Hattusa and at the maximum of its power included most of the Anatolian tableland and northern Syria. The Hittites are believed to have been the first to fortify the rock of Afyonkarahisar. Their power declined in the early XIIth century BC for reasons which are not entirely clear. 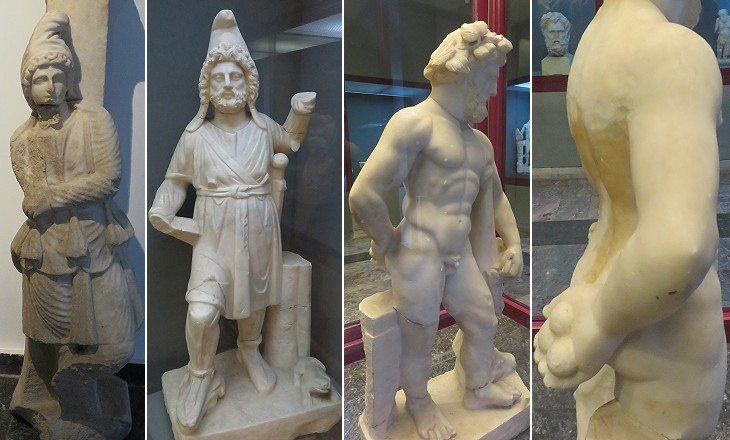 In the VIIIth century BC Afyonkarahisar was conquered by the Phrygians, tribes coming from the Balkans, who gave their name to a vast territory between Cappadocia and the costal regions. They used to wear a cap that became a symbol of liberty in the XVIIIth century, because it was confused with the felt cap which the Romans awarded slaves when they were given liberti (freedmen) status. The Greeks used to portray people from Asia wearing a Phrygian cap (a late example can be seen in the depiction of the Magi at S. Apollinare Nuovo in Ravenna).
The Phrygians worshipped Cybele (see introductory page), but they eventually accepted the Greek gods (including Heracles); at the same time the cult of the goddess spread to Greece and Rome. The priests of Cybele emasculated themselves similar to Attis, a beautiful young man whom the goddess maddened and who cut off his genitals. You may wish to see a statue of Attis after the emasculation which was found at Ostia. 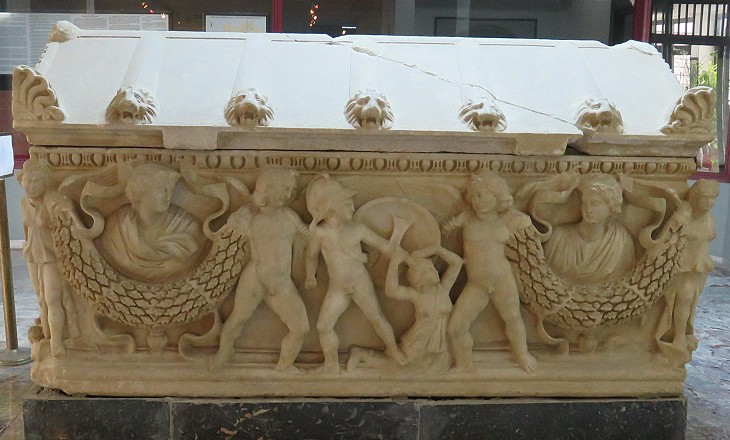 Archaeological Museum: detail of sarcophagus (ca 180 AD) found at Dinar and made with marble from Docimeium (both locations are in the province of Afyonkarahisar). The central scene depicts Achilles killing Penthesilea, Queen of the Amazons, an episode in the War of Troy, which is not included in Homer's poems. A detail of the sarcophagus is shown in the introductory page

The marble from the quarries of Docimeium was of such excellent quality that sculptors did not hesitate to embellish their works with entirely detached ribbons, because they were sure the marble would not break. As a matter of fact in the sarcophagus shown above decorative elements (wreaths and ribbons) are of greater artistic value than the central scene. Its lid is similar to that of a sarcophagus found at Aizani, an ancient town near Afyonkarahisar. The image used as background for this page shows a marble statuette of the Archaeological Museum portraying Eros. 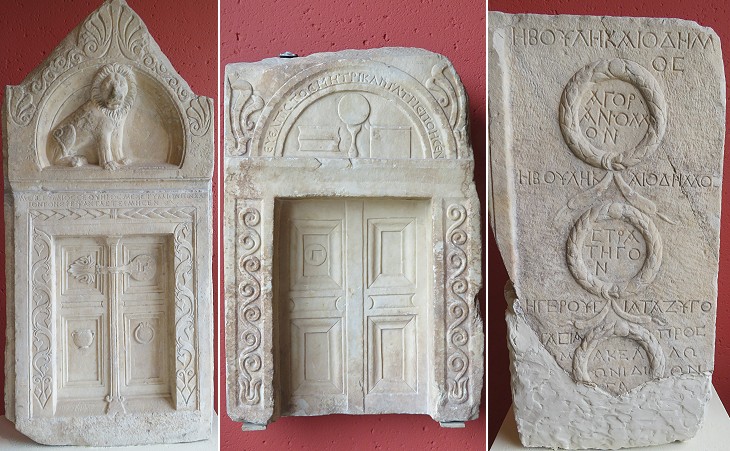 Brussels History & Art Museum: three tombstones of the IInd/IIIrd century AD based on the depiction of the door of afterlife which were found in locations (Kisil Dag, Acmonia) not very far from Afyonkarahisar