- Milazzo
Temple to Hercules at Agrigento; (right) detail of the apse of Palermo's Cathedral 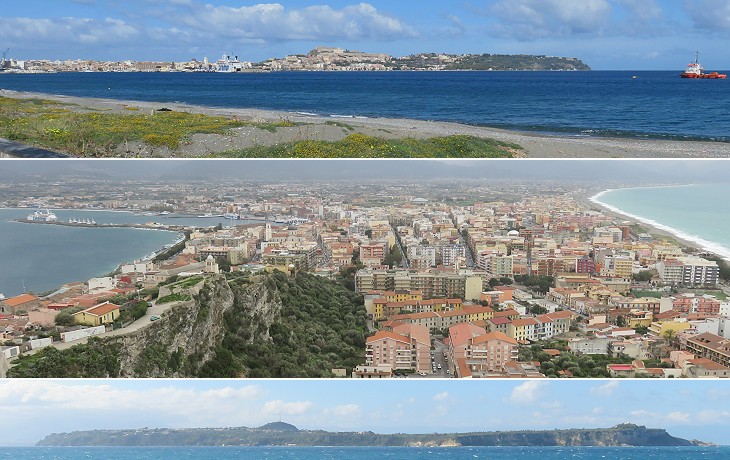 Milazzo and its peninsula seen from: (above) the coast to its east; (middle) the Norman tower at the top of the fortress; (below) the ferry to the Lipari Islands

Friday, April 23, 1790. Before me was a large extent of coast, with Lipari and its dependant islands, the smoking Stromboli, the town of Milazzo, and the singular strip of land on which it is built; and in the foreground, a long range of mountains (..). The town is built on a long and narrow neck of land, extending into the sea.
Sir Richard Colt Hoare - A Classical Tour through Italy and Sicily - published in 1819.
In the Bay of Melazzo one of the greatest naval engagements of ancient times took place between the fleets of Octavius Caesar and Sextus Pompey (Pompey's son); each fleet consisted of three hundred vessels and at the same time the promontory of Melazzo and the opposite coast towards Spadafora, by which this Bay is formed, were possessed by their armies who with thousands of other spectators beheld this memorable battle. Octavius was on board, though his fleet was commanded by Agrippa. It was in this battle that Octavius is said to have fallen stupified upon the deck. Some historians say he was terrified while others impute it to a heavy sleep from great exertion and fatigue. (..) The contest lasted the entire day and ended in the defeat of Pompey, few of his ships escaping. This took place in the 717th year of Rome (35 BC).
Sir George Cockburn - A Voyage to Cadiz and Gibraltar: up the Mediterranean to Sicily and Malta in 1810/11. In 1810 the writer was appointed to the staff of the English army at Messina when Sicily was at risk of being invaded by the French, hence his interest in battles and fortifications. Actually the most famous battle which was fought at Milazzo took place in 260 BC between the Romans and the Carthaginians. 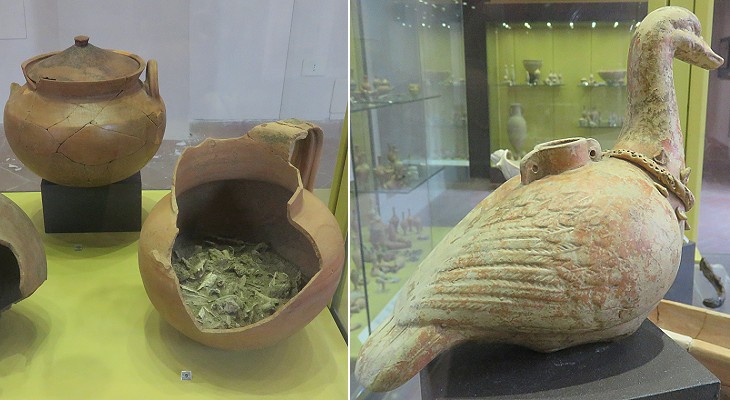 Melazzo, in the neighbourhood of Messina, likewise merits notice. The Bridle-road to this Town is good, and commands bold scenery. Melazzo is supposed to have been the ancient Mylae, where Ulysses's Companions slew the Oxen of the Sun. The Herds consecrated to Apollo were labouring oxen, employed in tillage; and it was esteemed, by the Ancients, a profanation to destroy a labouring ox, and criminal to eat it.
Mariana Starke - Travels in Europe for the Use of Travellers on the Continent and likewise in the Island of Sicily - 1838 Edition - based on a travel to Sicily made in 1834.
Although Milazzo is thought to be of nearly equal antiquity with Messina there are no remains by which you are led to form any idea of its past greatness.
Edward Blaquiere - Letters from the Mediterranean - 1813
Milazzo does not retain monuments of its ancient past, but a number of necropolises were found in its proximity. Some of the findings were moved to the Archaeological Museum of Lipari, but the most recent ones are now on display in the former Spanish barracks of the town. The old town from the ferry to Lipari

I profited by the fineness of the weather to visit the only object of curiosity in the modern town of Milazzo. I mean the Castle, which is situated on a lofty eminence, and commands a most delightful view on all sides, comprising the Faro of Messina, the coast of Patti, Cefalu, and the Lipari islands. Great part of the city originally stood on this hill; but has been since removed into the plain, and no building, except the dome, remains. The castle, like most of those in Sicily, is neglected, and unprovided either with men or arms. Milazzo is small, and contains a few inhabitants. Colt Hoare
The move of the inhabitants from the old fortified town to the low area near the harbour was accelerated by an earthquake which struck Milazzo in 1786. By that time the threat of Ottoman corsair raids had greatly subsided. (left) Old Duomo/Chiesa Madre; (right) detail of an altar showing St. Stephen the Protomartyr to whom the church was dedicated

The Madre Chiesa has a fine dome and beautiful Mosaic marble altars. Cockburn
The old main church of Milazzo was built in 1607-1642 immediately inside the XVIth century Spanish fortifications, on the site of two previous churches. It was deconsecrated after 1860 by the Italian goverment and it was used as an ancillary facility for the garrison. It was spoiled of almost all of its altars and decorations. 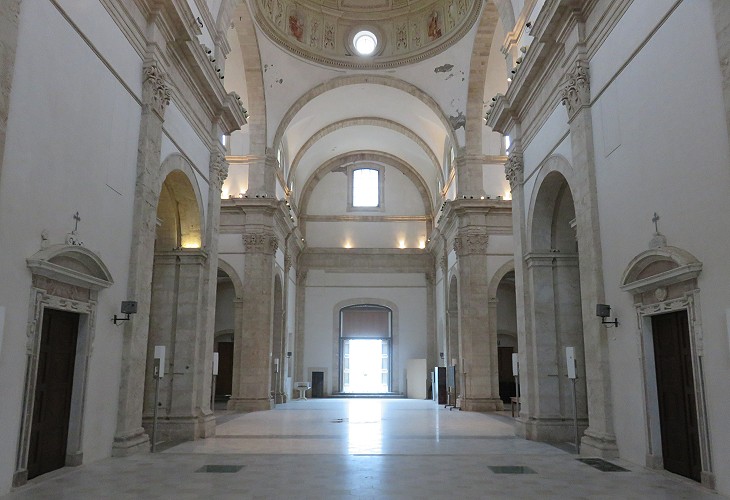 The design of the interior has gained from the removal of altars, painted walls and ceilings, statues, etc. In many Italian churches the attention of the visitor is often caught by these embellishments to the detriment of the appreciation of the architect's work. The layout of this church is rather unusual; it is a Latin cross, but the long arm is on the back, rather than in the front; in this way the façade is rather close to the dome. Its construction is coeval to that of S. Pietro Nuovo in Rome where the view of the dome was impaired by a too long and high nave. 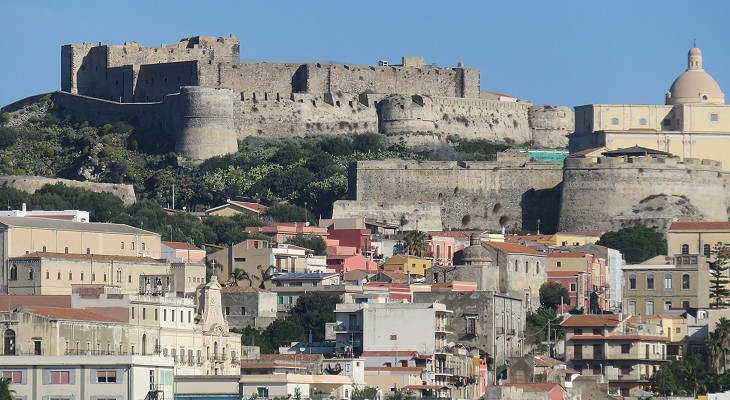 The three (or maybe four) fortresses

We have a very fast going boat with twelve oars; it is astonishing how many hours the Sicilians hold out rowing singing hymns all the while. The distance from Volcano to Melazzo is about twenty one miles and we ought to have arrived by 9 o clock. The Padrone however went out of his course near to Tindari and had to beat and row up all round the Promontory. It was 11 o clock at night when we landed. Etna looked beautiful by moon light covered with snow. We went to Doctor Mosely's to drink a bottle of wine (..).
After calling on General Heron who commands here I went to see the fortifications and from thence to our works on the Isthmus. The Promontory of Melazzo is about three Irish miles long and perhaps half a mile broad. The upper and lower towns are situated at the commencement of this peninsula (..). They are surrounded by a wall and two bastions command the Messina entrance. The Citadel is in the upper town in a commanding situation and the place is capable of being made very strong. We have built some hut barracks out of the town just at the Isthmus and we are also building forts and squandering money profusely. Cockburn 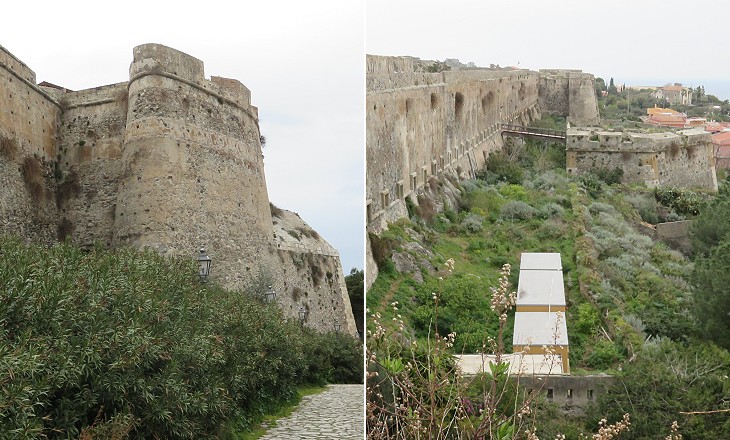 The layout of the fortifications brings to mind a matryoshka doll with each fortress nested inside another one. Walls protected the hill on the isthmus, thus separating the upper town from the new late XVIIIth century development. Today their site is identifiable only by the Spanish barracks which were built along them. They did not provide an effective protection and Emperor Charles V commissioned the construction of a new defensive line based on two large bastions and three ravelins, bulwarks which projected from the walls. They were designed by Antonio Ferramolino from Bergamo, at the time a possession of the Republic of Venice. He worked at the Arsenale di Venezia and became acquainted with the state-of-the-art fortresses the Venetians were building in their Greek territories, e.g. in Candia (Iraklion). He died during the 1550 siege of Mahdia in Tunisia. 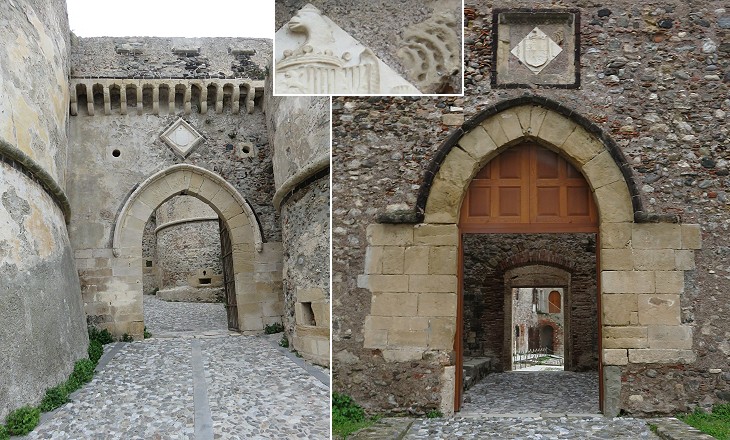 The development of modern artillery in the XVth century led the Aragonese rulers of Sicily to build an enclosure with five circular towers around the existing fortress on the top of the hill. The circular design of the towers increased their capability to withstand artillery fire. They were built at a time during which Italy was plagued by a war of all against all. It was ended in 1454 by a peace agreement signed by all participants. 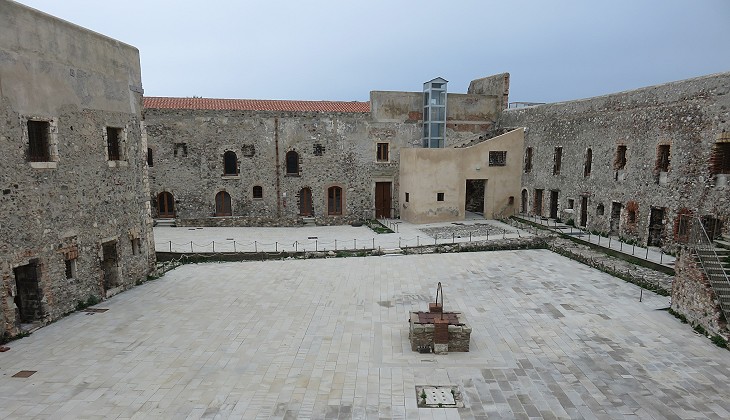 Interior of the Swabian fortress

This fortress was completed during the reign of German Emperor Frederick II of the House of Swabia. Similar to Castello Maniace at Syracuse it had a square layout.
Today the building clearly shows that it was utilized as a jail until 1960 and that afterwards it was abandoned for a long time. 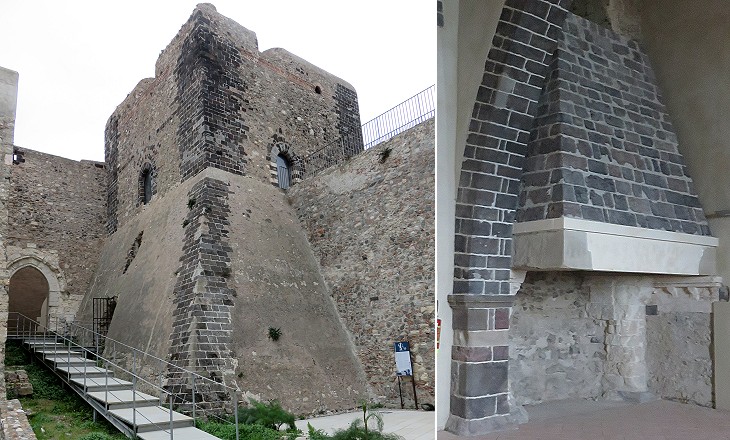 The Swabian fortress incorporated a large tower which was built by the Norman kings. It was decorated (and strengthened) with black lavic stones. Its existence is recorded in 1151 by an Arab geographer who lived in Sicily. Although the fortifications of Milazzo were built to protect the town from Arab/Ottoman threats, they were also meant to prevent landings from the Italian peninsula and this explains why Cockburn visited the town. 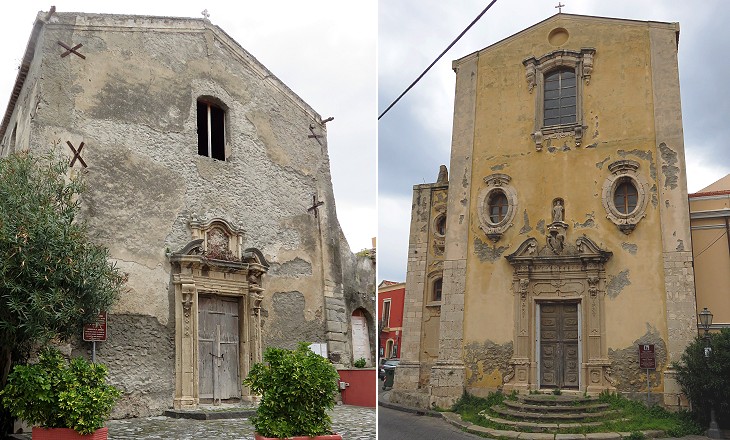 The town contains seven thousand souls, but is irregularly built. There is a species of public hospital together with a great number of convents and churches. Blaquiere
While the old Duomo and a much damaged Benedictine convent are the only remaining non-military buildings inside the XVIth century Spanish fortress, Borgo Antico, the area outside it, but still on the hill, retains many churches, part of which are deconsecrated because few inhabitants live there. 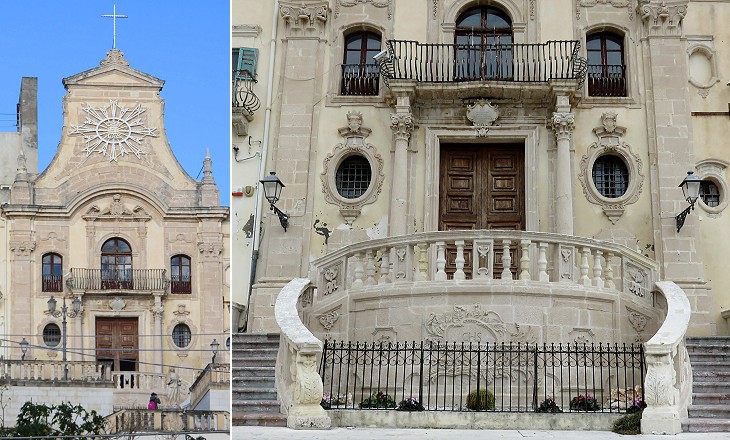 This church and the adjoining convent were initially built in the XVth century by St. Francis of Paola, the founder of the Order of Minims (see their headquarters in Rome). He is the patron saint of both Calabria and Sicily. The church at Milazzo was redesigned in the XVIIIth century and similar to many other churches of that period in Sicily (e.g. the Cathedral of Noto it was preceded by a flight of steps. 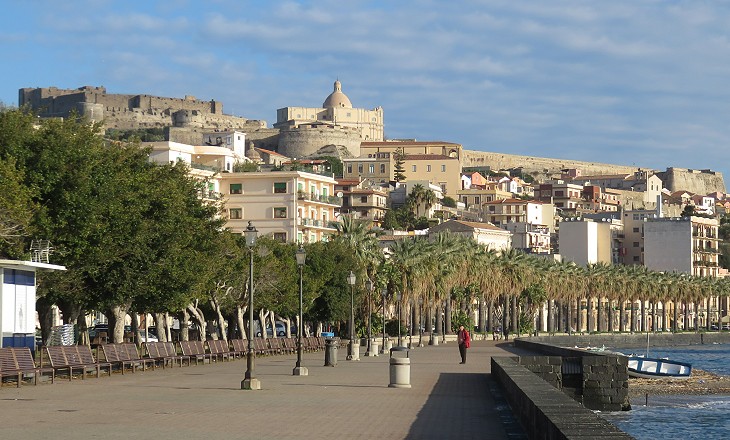 The sea promenade of the Lower Town

Melazzo is enriched by a Thunny Fishery (an elaborate technique for trapping and catching tuna fish) from the middle of April to the end of June, and from the beginning of August till September. The Spada Fishery also enriches this part of the Sicilian coast during the months of June and July. Starke
Today the economy of Milazzo is mainly based on holidaymakers enjoying its beaches, particularly those on the western side of the peninsula, and on travellers on their way to the Lipari Islands. 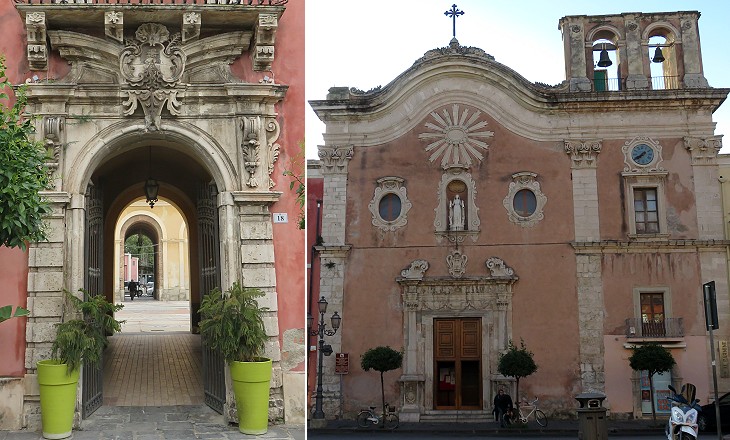 (left) Portal of the Convent of the Carmelites in the Lower Town; (right) Chiesa del Carmine

The Padre Regente of the Carmelites at Milazzo, to whom I sent my letter of recommendation came to meet me with two carriages, and conducted me to his convent. Colt Hoare
A church and convent of the Carmelites was founded in the XVIth century, but it was destroyed in 1719 during an attempt made by King Philip V of Spain to reconquer Sicily, which he had lost as a result of the 1713 peace agreements which ended the Spanish Succession War. It was entirely rebuilt between 1726 and 1752. In 1888 the convent was confiscated and turned into the Town Hall. 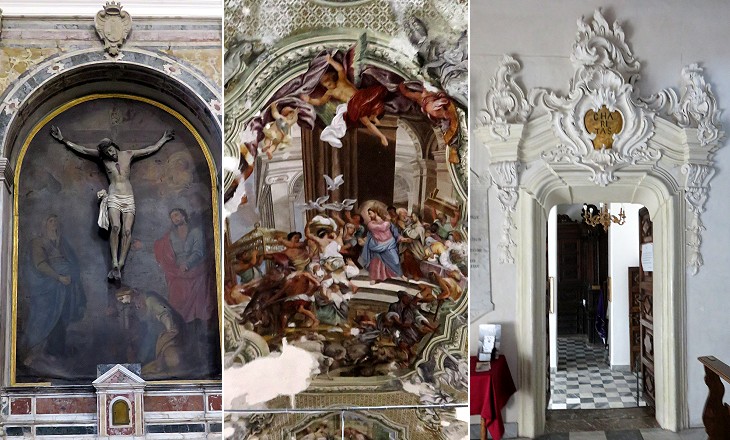 There is another Church where the ceiling is beautifully painted and likewise very handsome marble altars. Cockburn
The historical churches of Milazzo retain interesting details, either in their interior or in the design of their portals. A plaque at S. Maria Maggiore commemorates the victory at Milazzo by which Giuseppe Garibaldi completed the conquest of Sicily in 1860. 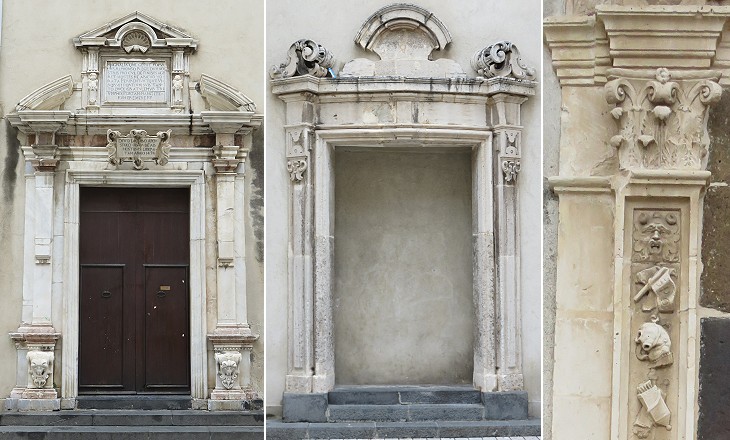 The image used as background for this page shows a relief depicting a crowned eagle above the sea, the symbol of Milazzo, in the old town.