- Palermo: Palaces of the Noble Families
(left) Temple to Hercules at Agrigento; (right) detail of the apse of Palermo's Cathedral 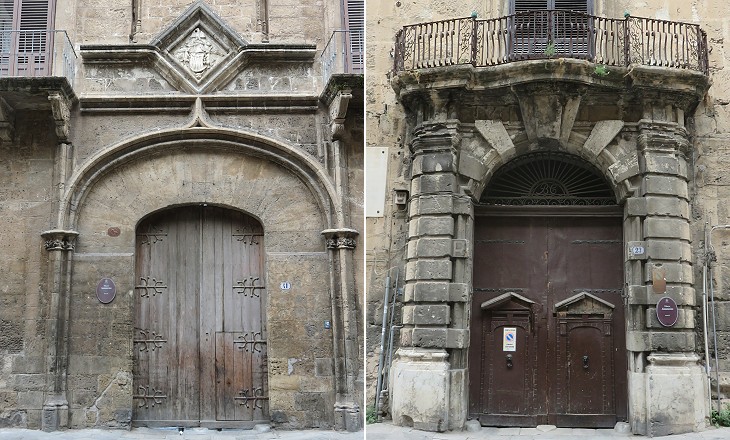 During the XVIth century the Spanish Viceroys of Sicily straightened and embellished Il Cassaro, a street which crossed the town from the harbour to their residence. It was along this street that many noble families built their palaces, but previous to that redesign of the urban layout they chose other locations. Palazzo Ajutamicristo was built at Fieravecchia, a XVth century market. It is a very huge building which retains an original portal by Matteo Carnelivari who at the same time was working at nearby Palazzo Abatellis.
Aiutamicristo means "Help Me Christ" and it was the surname of a family from Pisa. Guglielmo Ajutamicristo was a rich banker of Pisan origin who managed to buy some Sicilian fiefdoms and built this palace as evidence of his social growth.

The side of the palace shown above is most likely the oldest one, because the three windows are dated XIVth century and with their thin mouldings they reflect decorative patterns from Barcelona (see a detail of St. Yves' Gate in the Cathedral of Barcelona - it opens in another window). It is located in a hidden uphill street south of Il Cassaro. It is named after the three families that owned it in the XVth/XVIth century. The Valguarnera were one of the wealthiest families of Palermo where they had other palaces in addition to a large villa in Bagheria. 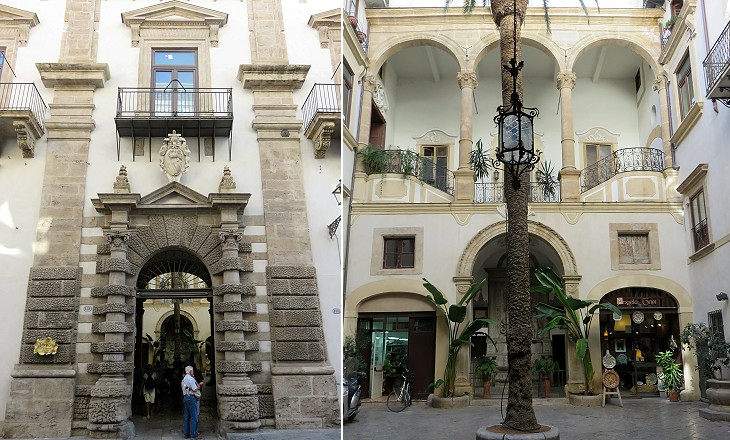 There is scarcely a house that has not something striking in its architecture, and a number of marble columns, either in front or in the court yards; for every great palace has a large court yard with a piazza and columns of marble.
Sir George Cockburn - A Voyage to Cadiz and Gibraltar: up the Mediterranean to Sicily and Malta in 1810/11
This palace was built in 1588 so shortly after Il Cassaro had become the main street of Palermo. It stands on the site of a previous medieval building. The use of bugnato on the façade brings to mind Ospedale di S. Giacomo which was built along the same street and approximately in the same period and the 1553 portal of Villa Giulia in Rome. 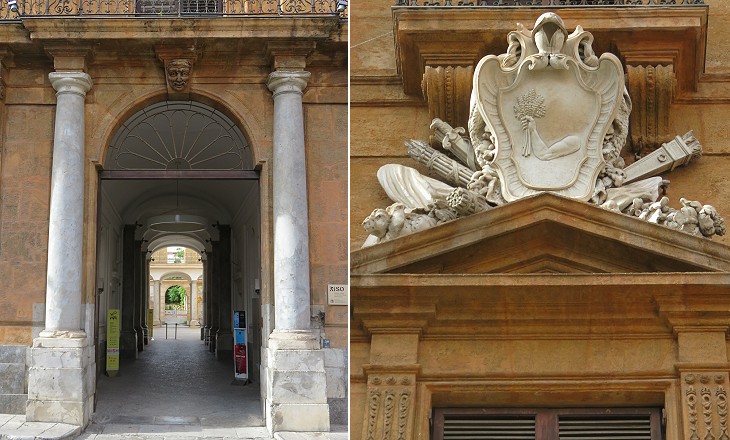 Palazzo Ventimiglia di Belmonte along Il Cassaro opposite Piazza Bologni; (left) portal; (right) coat of arms showing rice panicles of the Riso who bought the building in the XIXth century; its frame was designed bearing in mind Roman coats of arms of the XVIIth century

This palace was designed in 1784 by Giuseppe Venanzio Marvuglia and its portal shows the passage from Baroque to Neoclassicism. In 1933 it was chosen to house Casa del Fascio, i.e. the headquarters of the Fascist Party in Palermo. A statue of Emperor Charles V which stood opposite the building was removed in order that speeches could be delivered from the balcony to the crowd in Piazza Bologni, similar to what occurred in Piazza Venezia in Rome. 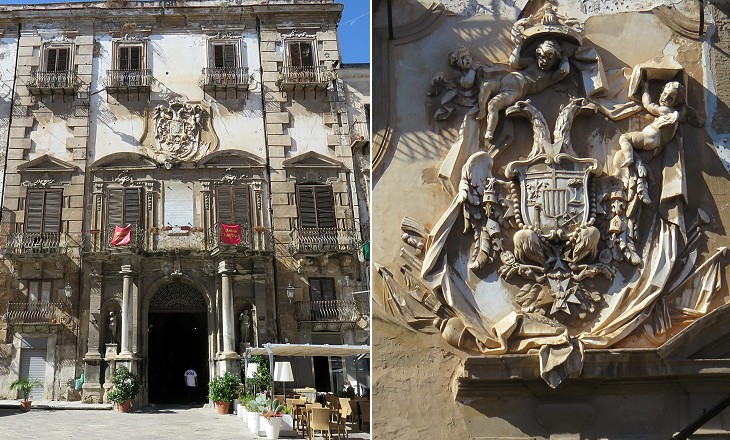 (left) Palazzo Alliata di Villafranca in Piazza Bologni; (right) the family coat of arms which includes four other heraldic symbols behind the central one and references to the House of Habsburg (double-headed eagle) and to the Knights of Malta

The square is named after the Beccadelli, a family from Bologna. Simone Beccadelli was Archbishop of Palermo in 1446-1465 and his coat of arms decorates the portal of the Archbishop's Palace. Their property in Piazza Bologni was bought in the XVIIth century by the Alliata, a family of bankers from Pisa who, similar to the Ajutamicristo, eventually acquired a noble title. They bought also another palace which has retained its medieval design.
In 1770 Domenico Alliata di Villafranca was governor of Messina when Patrick Brydone visited the town: We told him (with an apology for our abrupt departure) that we were obliged to set off to-morrow, and begged his protection on our journey. He replied, that he would give orders for guards to attend us, that should be answerable for every thing (..). He added, that we might entirely rely on those guards, who were people of the most determined resolution, as well as of the most approved fidelity, and would not fail to chastise on the spot, any person who should presume to impose upon us. Now, who do you think these trusty guards are composed of? Why, of the most daring, and most hardened villains, perhaps, that are to be met with upon earth, who, in any other country, would have been broken upon the wheel, or hung in chains; but are here publicly protected, and universally feared and respected.
Patrick Brydone - A Tour through Sicily and Malta in 1770.
This account is regarded by historians as early evidence of the social background from which Mafia lawlessness stemmed in some parts of Sicily. 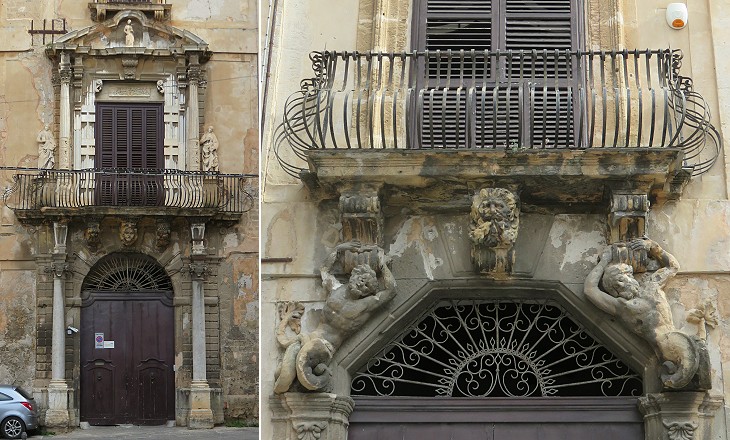 Few public or private buildings exhibit any traces of true noble architecture; a vicious taste prevails resembling that which predominated in Spain after the death of the great men that flourished under Charles the Fifth, and Philip the Second.
Henry Swinburne - Travels in the Two Sicilies. 1777-1780
Swinburne, similar to other travellers of his time was imbued with Johann Joachim Winckelmann's views on art which were published in 1764. Winckelmann saw the XVIIth century as the beginning of an artistic decline, which could only be reversed by drawing inspiration from the works of Ancient Greece.
Palazzo Ugo delle Favare was redesigned in 1713 in line with the fashion of the time. 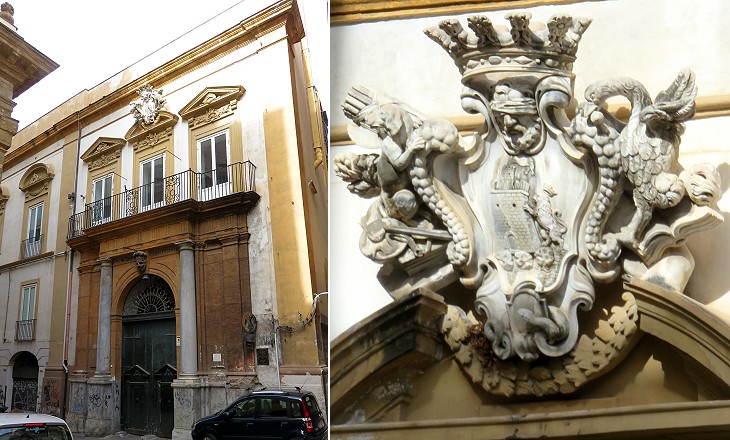 Patrick Brydone spent some forty days in Palermo. He summarized his understanding of the Sicilian noble titles as follows: The Sicilians still retain some of the Spanish customs, though nothing of their gravity or taciturnity. The younger sons of the nobility are styled don by their christened names, and the daughters donna, like our appellation of lord and lady to the sons and daughters of dukes. The eldest son has commonly the title of count or marquis, but they are not all counts as in France and Germany, where I have seen six counts in one house, and very near twice the number of barons in another. One of the most common titles here, as well as at Naples, is that of prince; and although these were only created by Philip II of Spain, they take rank of all the other nobility, some of whom, particularly the counts, carry their origin as far back as the time of the Normans, and look with great contempt on these upstart princes. The dukes and marquisses are not so old: the first were created by Charles V, and the second, though an inferior title, by King Alphonso, in the fifteenth century. So that the dignity of the Sicilian titles may be said to be in the inverse ratio of their antiquity. 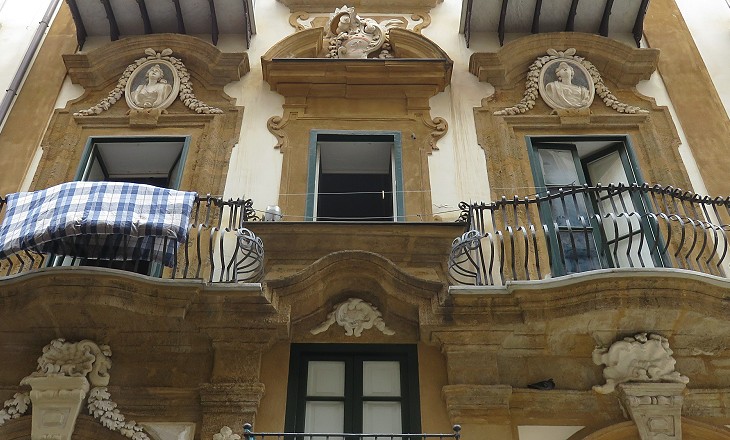 In ca 1760 this palace, which was conveniently situated near the harbour, was turned into an inn by Madame Montaigne, a French lady whom Brydone sketched in a couple of paragraphs.
As there is but one inn in Palermo, we were obliged to agree to their own terms (five ducats a-day). (..) It is kept by a noisy, troublesome Frenchwoman, who, I find, will plague us: there is no keeping her out of our rooms, and she never comes in without telling us of such a prince and such a duke, that were so superlatively happy at being lodged in her house. (..) Although she has now been here these twenty years, she is still as perfectly French as if she had never been without the gates of Paris; and looks upon every woman in Palermo with the utmost contempt, because they have never seen that capital, nor heard the sublime music of its opera. She is likewise an admirable epitome of all Frenchwomen, whose universal passion has ever been the desire of admiration and of appearing young, and ever would be, I believe, were they to live to the age of a thousand. 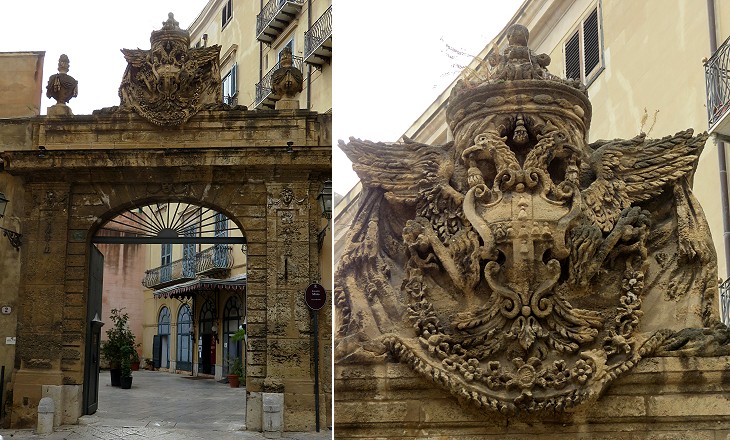 This portal is situated in the heart of old Palermo near S. Francesco. The palace is the result of the redesign of medieval buildings which belonged to the Filangieri, a family of Norman origin perhaps best known after its Neapolitan branch. The double headed eagle, similar to that of the Alliata, is a reference to the House of Habsburg and more exactly to Emperor Charles VI who in 1720, when he was King of Sicily, granted the Filangieri the right to associate their coat of arms to his own heraldic symbol. 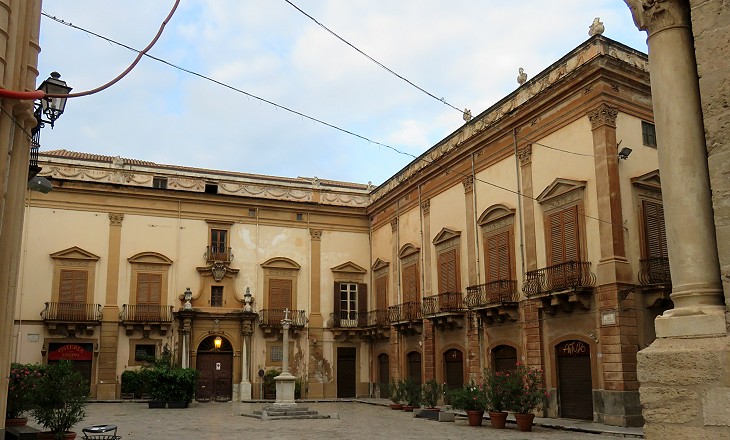 This palace was built in the second half of the XVIIIth century and its external appearance was modified in the following one so that it does not reflect the luxury of its interior where a famous scene of "The Leopard" starring Burt Lancaster and Claudia Cardinale (it opens in another window) was shot in 1963.
The square is named after a cross on a column which marks the site where according to tradition the French soldiers who were killed during the 1282 Sicilian Vespers were buried. 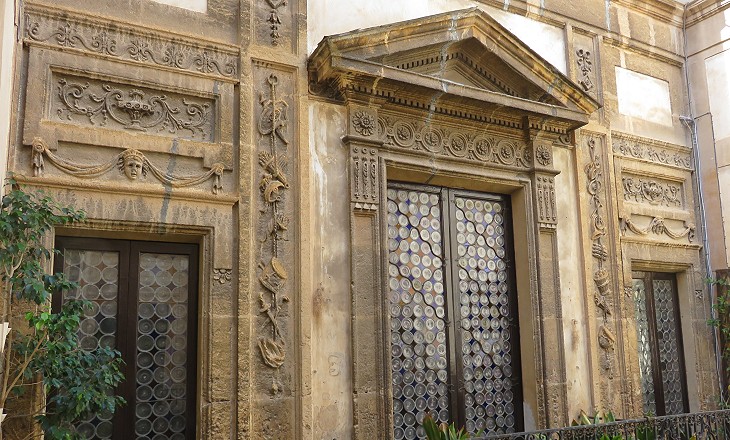 This building is shown in the page covering the medieval palaces of Palermo, but its interior was renovated in the XVIIIth century by some of the artists who worked also in other palaces. 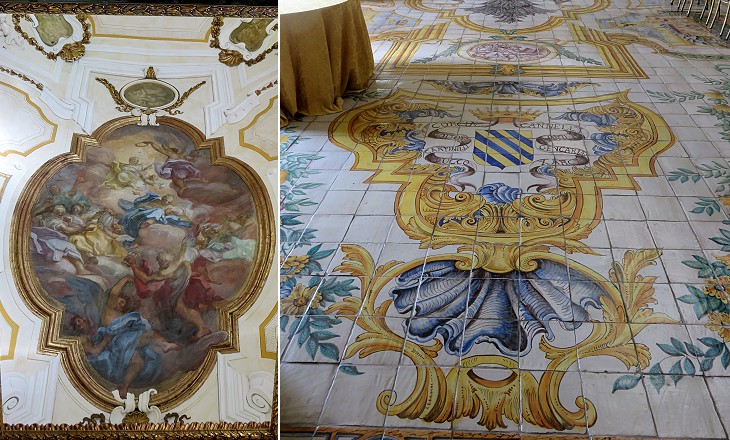 Palazzo Conte Federico: ballroom: (left) ceiling by Gaspare Serenario; (right) floor, another image of which is shown in the introductory page

The image used as background for this page shows a detail of a palace near Porta Felice.